A new record of enumeration of regular graphs by parallel processing

We broke a record, set 8 years ago, in the enumeration of non-isomorphic regular graphs by expanding the sequence of A006820 in OEIS, to achieve the number for 4-regular graphs of order 23 as 429,668,180,677,439, while discovering serval optimal regular graphs with minimum diameters. The number of 4-regular graphs and the optimal graphs, extremely time-consuming to calculate, result from a method we adapt from GENREG, a classical regular graph generator, to fit for supercomputers' strengths of using thousands of processor cores. 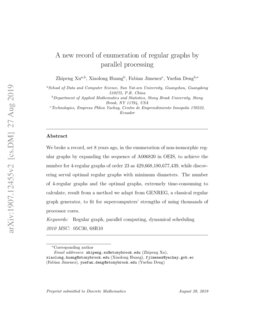 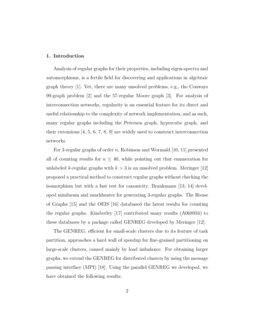 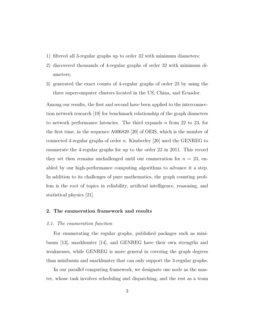 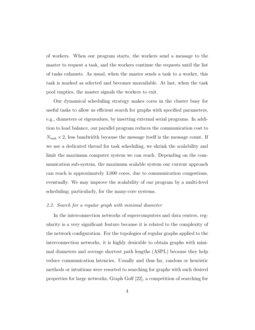 Analysis of regular graphs for their properties, including eigen-spectra and automorphisms, is a fertile field for discovering and applications in algebraic graph theory Godsil2001 . Yet, there are many unsolved problems, e.g., the Conway’s 99-graph problem conway and the 57-regular Moore graph Hoffman1960 . For analysis of interconnection networks, regularity is an essential feature for its direct and useful relationship to the complexity of network implementation, and as such, many regular graphs including the Peterson graph, hypercube graph, and their extensions Dasa ; Ohringa ; Ohring1993 ; Seo2011 ; Seo2017 ; Seo2008 are widely used to construct interconnection networks.

For 3-regular graphs of order n, Robinson and Wormald Robinson1983 ; Robinson1977 presented all of counting results for n≤40, while pointing out that enumeration for unlabeled k-regular graphs with k>3 is an unsolved problem. Meringer Meringer1999 proposed a practical method to construct regular graphs without checking the isomorphism but with a fast test for canonicity. Brankmann Brinkmann1996 ; Brinkmann2017 developed minibaum and snarkhunter for generating 3-regular graphs. “The House of Graphs” Brinkmann2013 and the OEIS inc2019line databased the latest results for counting the regular graphs. Kimberley A068934 contributed many results (A068934) to these databases by a package called GENREG developed by Meringer Meringer1999 .

The GENREG, efficient for small-scale clusters due to its feature of task partition, approaches a hard wall of speedup for fine-grained partitioning on large-scale clusters, caused mainly by load imbalance. For obtaining larger graphs, we extend the GENREG for distributed clusters by using the message passing interface (MPI) mpi2014 . Using the parallel GENREG we developed, we have obtained the following results:

Among our results, the first and second have been applied to the interconnection network research Deng2019 for benchmark relationship of the graph diameters to network performance latencies. The third expands n from 22 to 23, for the first time, in the sequence A006820 a006820 of OEIS, which is the number of connected 4-regular graphs of order n. Kimberley a006820 used the GENREG to enumerate the 4-regular graphs for up to the order 22 in 2011. This record they set then remains unchallenged until our enumeration for n=23

, enabled by our high-performance computing algorithms to advance it a step. In addition to its challenges of pure mathematics, the graph counting problem is the root of topics in reliability, artificial intelligence, reasoning, and statistical physics

2 The enumeration framework and results

For enumerating the regular graphs, published packages such as minibaum Brinkmann1996 , snarkhunter Brinkmann2017 , and GENREG have their own strengths and weaknesses, while GENREG is more general in covering the graph degrees than minibaum and snarkhunter that can only support the 3-regular graphs.

In our parallel computing framework, we designate one node as the master, whose task involves scheduling and dispatching, and the rest as a team of workers. When our program starts, the workers send a message to the master to request a task, and the workers continue the requests until the list of tasks exhausts. As usual, when the master sends a task to a worker, this task is marked as selected and becomes unavailable. At last, when the task pool empties, the master signals the workers to exit.

Our dynamical scheduling strategy makes cores in the cluster busy for useful tasks to allow us efficient search for graphs with specified parameters, e.g., diameters or eigenvalues, by inserting external serial programs. In addition to load balance, our parallel program reduces the communication cost to

Ntask×2, less bandwidth because the message itself is the message count. If we use a dedicated thread for task scheduling, we shrink the scalability and limit the maximum computer system we can reach. Depending on the communication sub-system, the maximum scalable system our current approach can reach is approximately 3,000 cores, due to communication congestions, eventually. We may improve the scalability of our program by a multi-level scheduling; particularly, for the many-core systems.

2.2 Search for a regular graph with minimal diameter

In the interconnection networks of supercomputers and data centers, regularity is a very significant feature because it is related to the complexity of the network configuration. For the topologies of regular graphs applied to the interconnection networks, it is highly desirable to obtain graphs with minimal diameters and average shortest path lengths (ASPL) because they help reduce communication latencies. Usually and thus far, random or heuristic methods or intuitions were resorted to searching for graphs with such desired properties for large networks; Graph Golf

golf , a competition of searching for optimal graphs with the minimal diameters and ASPLs, generated many graphs that are very commonly, but asymmetrically. However, we still hope to discover graphs with all desired properties including minimum diameters, ASPLs, symmetry, and robustness but with one disadvantage: smaller graphs. However, these graphs can be adopted in smaller clusters or multiple modules of these clusters or system-on-chip.

Using this framework, we decomposed the search into 200,000 sub-tasks and completed the exhaustive search of all of 3-regular graphs of order 32 with diameter 4. The program running on the Sunway-Bluelight supercomputer sunway with 80,000 cores for 72 hours and discovered 55 graphs with diameter 4 after exhausting all 18,941,522,184,590 possible graphs predicted by Robinson et al [10] who only enumerated them without finding the graphs with desired properties including minimum diameters. Deng et al. Deng2019 applied one (Fig. 1 (a)) of these graphs to construct a Beowulf BE2003 cluster, and their benchmark results show that the graphs with the minimal diameter outpeform other classical topologies.

shows the distribution of generated graph numbers for all cases, which look like Gaussian distribution with the long tail containing hundreds of millions of graphs and the frequency fluctuates by 4 orders of magnitude. Clearly, the tasks of enumerations vary greatly from graph to graph, and our dynamic task scheduling has eliminated substantial waiting time due to load imbalance.

When we search for the minimum-diameter graphs among all possible 4-regular graphs of order 32, there is no enumeration result for this scale when girth≤5. We can still use our software to search for regular graphs with minimum diameter, as shown in Fig. 1 (a), without confirmation of exhaustiveness. Therefore, we verified the results in Tab. 1 after decomposing the problem into 50,000 sub-tasks and setting the split-level as 12. We manage to increase the n of the sequence A006820 from 22 to 23 and confirmed the number of 4-regular graphs of order 23 as 429,668,180,677,439 by using our parallel GENREG with the same parameters.

Our work to obtain the new enumeration for n=23

is estimated to cost nearly 100 core-years. We ganged three supercomputers, the SeaWulf at Stony Brook University, the Tianhe-1 in Southern China, and the IBM Quinde in Ecuador, for completing the task. As shown in Tab.

Our parallel method adapting the GENREG enables us to complete the research and enumeration on systems of thousands of 3000 processor cores. For the first time, using this new approach, we discovered several optimal graphs of order 32 and found the enumeration count for 4-regular graphs of order 23, gaining confidence in the graph theory community that high-performance computing can help solve otherwise intractable problems.

Z. Xu is supported by the special project high performance computing of National Key Research and Development Program 2016YFB0200604. We thank the National Supercomputing Centers in Jinan and Changsha in China, for computing resources and, M. Meringer of German Aerospace Center, for technical support of GENREG via e-mails.