Potential-based reward shaping (PBRS) is a particular category of machine learning methods which aims to improve the learning speed of a reinforcement learning agent by extracting and utilizing extra knowledge while performing a task. There are two steps in the process of transfer learning: extracting knowledge from previously learned tasks and transferring that knowledge to use it in a target task. The latter step is well discussed in the literature with various methods being proposed for it, while the former has been explored less. With this in mind, the type of knowledge that is transmitted is very important and can lead to considerable improvement. Among the literature of both the transfer learning and the potential-based reward shaping, a subject that has never been addressed is the knowledge gathered during the learning process itself. In this paper, we presented a novel potential-based reward shaping method that attempted to extract knowledge from the learning process. The proposed method extracts knowledge from episodes' cumulative rewards. The proposed method has been evaluated in the Arcade learning environment and the results indicate an improvement in the learning process in both the single-task and the multi-task reinforcement learner agents. 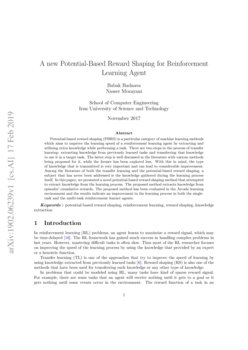 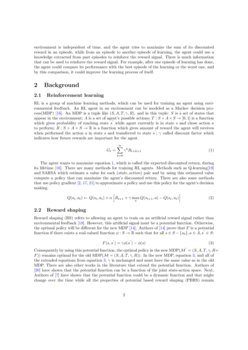 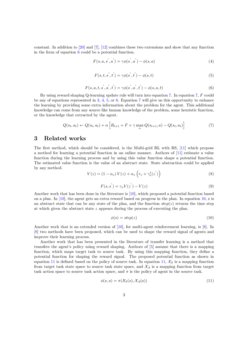 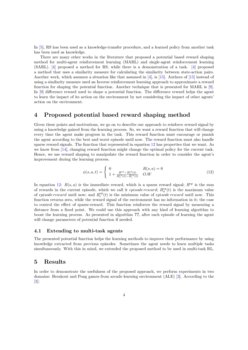 In reinforcement learning (RL) problems, an agent learns to maximize a reward signal, which may be time-delayed [16]

. The RL framework has gained much success in handling complex problems in last years. However, mastering difficult tasks is often slow. Thus most of the RL researcher focuses on improving the speed of the learning process by using the knowledge that provided by an expert or a heuristic function.

Transfer learning (TL) is one of the approaches that try to improve the speed of learning by using knowledge extracted from previously learned tasks [6]. Reward shaping (RS) is also one of the methods that have been used for transferring such knowledge or any other type of knowledge.

In problems that could be modeled using RL, many tasks have kind of sparse reward signal. For example, there are some tasks that an agent will receive nothing until it gets to a goal or it gets nothing until some events occur in the environment. The reward function of a task in an environment is independent of time, and the agent tries to maximize the sum of its discounted reward in an episode, while from an episode to another episode of learning, the agent could use a knowledge extracted from past episodes to reinforce the reward signal. There is much information that can be used to reinforce the reward signal. For example, after one episode of learning has done, the agent could compare its performance with the best episode of the learning or the worst one, and by this comparison, it could improve the learning process of itself.

RL is a group of machine learning methods, which can be used for training an agent using environmental feedback. An RL agent in an environment can be modeled as a Markov decision process(MDP)

is a function which gives probability of reaching state

s′ while agent currently is in state s and chose action a to perform; R:S×A×S→R is a function which gives amount of reward the agent will receives when performed the action a in state s and transferred to state s′; γ called discount factor which indicates how future rewards are important for the agent.

The agent wants to maximize equation 1, which is called the expected discounted return, during its lifetime [16]. There are many methods for training RL agents. Methods such as Q-learning[19]

and SARSA which estimate a value for each

(state,action) pair and by using this estimated value compute a policy that can maximize the agent’s discounted return. There are also some methods that use policy gradient [21, 17, 2] to approximate a policy and use this policy for the agent’s decision making.

Reward shaping (RS) refers to allowing an agent to train on an artificial reward signal rather than environmental feedback [18]. However, this artificial signal must be a potential function. Otherwise, the optimal policy will be different for the new MDP [14]. Authors of [14] prove that F is a potential function if there exists a real-valued function ϕ:S→R such that for all s∈S−{s0},a∈A,s′∈S:

By using reward shaping Q-learning update rule will turn into equation 7. In equation 7, F could be any of equations represented in 3, 4, 5, or 6. Equation 7 will give us this opportunity to enhance the learning by providing some extra information about the problem for the agent. This additional knowledge can come from any source like human knowledge of the problem, some heuristic function, or the knowledge that extracted by the agent.

Another work that has been done in the literature is [10], which proposed a potential function based on a plan. In [10], the agent gets an extra reward based on progress in the plan. In equation 10, z is an abstract state that can be any state of the plan, and the function step(z) returns the time step at which given the abstract state z appears during the process of executing the plan.

Another work that is an extended version of [10], for multi-agent reinforcement learning, is [8]. In [8] two methods have been proposed, which can be used to shape the reward signal of agents and improve their learning process.

There are many other works in the literature that proposed a potential based reward shaping method for multi-agent reinforcement learning (MARL) and single-agent reinforcement learning (SARL). [4] proposed a method for RS, while there is a demonstration of a task. [4] proposed a method that uses a similarity measure for calculating the similarity between state-action pairs. Another work, which assumes a situation like that assumed in [4], is [15]. Authors of [15] instead of using a similarity measure used an Inverse reinforcement learning approach to approximate a reward function for shaping the potential function. Another technique that is presented for MARL is [9]. In [9] difference reward used to shape a potential function. The difference reward helps the agent to learn the impact of its action on the environment by not considering the impact of other agents’ action on the environment.

In equation 12: R(s,a) is the immediate reward, which is a sparss reward signal; Rep is the sum of rewards in the current episode, which we call it episodereward; Repu(t) is the maximum value of episodereward until now; and Repl(t) is the minimum value of episodereward until now. This function returns zero, while the reward signal of the environment has no information in it; the case to control the effect of sparse-reward. This function reinforces the reward signal by measuring a distance from a fixed point. We could use this approach with any kind of learning algorithm to boost the learning process. As presented in algorithm LABEL:alg:pbrs-ai, after each episode of learning the agent will change parameters of potential function if needed.

The presented potential function helps the learning methods to improve their performance by using knowledge extracted from previous episodes. Sometimes the agent needs to learn multiple tasks simultaneously. With this in mind, we extended the proposed method to be used in multi-task RL.

In order to demonstrate the usefulness of the proposed approach, we perform experiments in two domains: Breakout and Pong games from arcade learning environment (ALE) [3]. According to the [3]:

We used two different baselines to compare our proposed method with them. [1] used as a first baseline and [6] as a second baseline. [1] is an implementation of [13], which uses a policy gradient method to approximate the optimal policy of a specific task. As a second baseline, we implement [6] that presented in the literature of transfer learning. We evaluate our work in two different phases: first of all, we evaluate our method during the learning process, and then we evaluate the performance of the final policy. We tested our method with two different assumptions: the first assumption is that we know the maximum and minimum values of the episode reward in each task, and the second assumption is that we have no information about the episode reward of the task and this values will be obtained during the learning process.

Breakout is an arcade game, which an agent handles a paddle to hit a ball trying to destroy more bricks while preventing the ball to cross the paddle. We trained an agent in this environment for 1000000 episodes. Figure 1 shows the learning curve of agents that trained on the Breakout game. As we see in figure 1 area under the curve of our method is greater than the baseline method, and the final performance is also better than the baseline.

Pong is also an arcade game, which an agent has the responsibility of moving a paddle to hit a ball. The agent will receive -1 reward if it loses the ball and will receive +1 if the opponent loses the ball. We trained an agent in this environment for 30000 episodes. Figure 2 shows the learning curve of agents that trained in the Pong game. As you see in figure 2 area under the curve of our method is greater than one of the baseline methods. However, in general, the proposed method in this environment has not been able to work very well and has a little improvement.

The proposed method guides the agent toward a goal by looking at the value of episode reward. If the agent goes toward the goal, the reward signal will be reinforced. This method can be used with any learning algorithm, and it supposed to be efficient wherever applied. We implemented our method using [1] and compare the results with two different baselines in two different environments, and then we extend our method to be used in multi-task agents. In most of the experiments, the results were promising. We also tested our method in a multi-task agent, which tries to learn games of Pong and Breakout simultaneously, and we saw that our method could lead to improvement.