A New Insight into GAMP and AMP

A concise expectation propagation (EP) based message passing algorithm (MPA) is derived for the general measurement channel. By neglecting some high-order infinitesimal terms, the EP-MPA is proven to be equivalent to the Generalized Approximate Message Passing (GAMP), which exploits central limit theorem and Taylor expansion to simplify the belief propagation process. Furthermore, for additive white gaussian noise measurement channels, EP-MPA is proven to be equivalent to the AMP. Such intrinsic equivalence between EP and GAMP/AMP offers a new insight into GAMP and AMP via a unified message passing rule for non-linear processing, and may provide clues towards building new MPAs in solving more general non-linear problems. 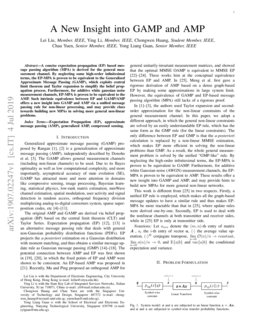 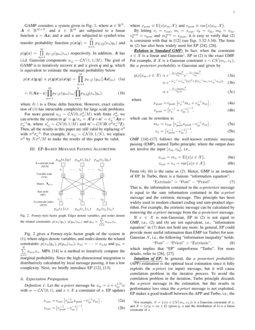 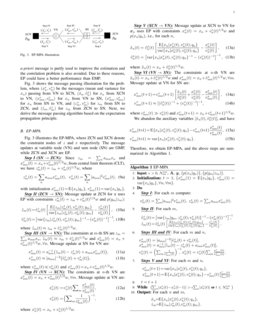 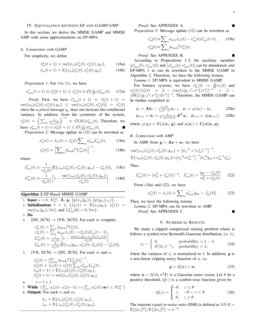 The original AMP and GAMP are derived via belief propagation (BP) based on the central limit theorem (CLT) and Taylor Series. Expectation propagation (EP) [12, 13]

[14, 15, 16, 17, 18]. The potential connection between AMP and EP was first shown in [19, 20], in which the fixed points of EP and AMP were shown to be consistent. An EP-based AMP was proposed in [21]. Recently, Ma and Ping proposed an orthogonal AMP for general unitarily-invariant measurement matrices, and showed that the optimal MMSE OAMP is equivalent to MMSE EP [22, 24, 23]. These works hint at the conceptual equivalence between EP and AMP. In [25], Meng et al. first gave a rigorous derivation of AMP based on a dense graph-based EP by making some approximations in large system limit. Based on the results in [25]

, the authors further provided a unified Bayesian inference framework for the extension of AMP and VAMP to the generalized linear model

[26, 27]. Another form of EP-based derivation for MMSE GAMP was illustrated in [28]. More recently, the connection between EP and the max-sum GAMP was built in [29].

In [2, 1, 3], the authors used Taylor expansion and second-order approximation for the non-linear constraints of the general measurement channel. In this paper, we adopt a different approach, in which the general non-linear constraints are solved by an easily understandable EP rule, which has the same form as the GMP rule (for the linear constraints). The only difference between EP and GMP is that the a-posteriori calculation is replaced by a non-linear MMSE estimation, which makes EP more efficient in solving the non-linear problems than GMP. As a result, the whole general measurement problem is solved by the unified “GMP-like” rule. By neglecting the high-order infinitesimal terms, the EP-MPA is proven to be equivalent to GAMP. Furthermore, for additive white Gaussian noise (AWGN) measurement channels, the EP-MPA is proven to be equivalent to AMP. These results offer a new insight into GAMP and AMP, and may provide hints to build new MPAs for more general non-linear networks.

We credit [25, 26, 27, 28, 29] for the work on the consistency between EP and GAMP/AMP. However, this correspondence firstly provides a unified “GMP-like” rule for the MPAs in solving general measurement channels.

Notations: Let amn denote the (m,n)-th entry of matrix A, ai the i

the conditional expectation and variance.

GAMP considers a system given in Fig. 1, where x∈RN, A∈RM×N, and z∈RM are subjected to a linear function z=Ax, and x and z are subjected to symbol-wise transfer probability function p(x|q)=N∏n=1pX|Q(xn|qn) and p(y|z)=M∏m=1pY|Z(ym|zm) respectively. In addition, A has i.i.d. Gaussian components aij∼CN(1,1/M). The goal of GAMP is to iteratively recover x and z given q and y, which is equivalent to estimate the marginal probability below

where δ(⋅) is a Dirac delta function. However, exact calculation of (1) has intractable complexity for large scale problems.

Fig. 2 gives a Forney-style factor graph of the system in (1), where edges denote variables, and nodes denote the related constraints: p(xn|qn), p(ym|zm), xn1=⋯=xnM and ym=N∑n=1amnxn. MPA [14] is a method to iteratively compute the marginal probability. Since the high-dimensional integration is distributively calculated by local message passing, it has a low complexity. Next, we briefly introduce EP [12, 13].

which can be rewritten to

If x∈X is non-Gaussian, EP in (2) is not equal to GMP, i.e., (2) and (6) are not equivalent, i.e., “information equation” in (7) does not hold any more. In general, EP could provide more useful information than EMP (or Turbo) for non-Gaussian X, i.e., the following “information inequality” holds:

Fig. 3 illustrates the EP-MPA, where ZCN and XCN denote the constraint nodes of z and x respectively. The message updates at variable node (VN) and sum node (SN) are GMP, while ZCN and XCN are EP.

We abandon the auxiliary variables [~xn(t),~vxn(t)], and have

Therefore, we obtain a unified “GMP-like” EP-MPA, and the above steps are summarized in Algorithm 1.

Iv Equivalence between EP and GAMP/AMP

The equivalence of EP and AMP is firstly derived in [25], based on which [26, 27] further proposed a unified Bayesian inference framework for the extension of AMP and VAMP to the generalized linear model. Another form of EP-based derivation for MMSE GAMP was illustrated in [28]. In [29], the max-sum GAMP was built by EP. In this section, we derive the MMSE GAMP and MMSE AMP with some approximations on the unified “GMP-like” EP-MPA in Algorithm 1.

For simplicity, we define

Message update in (12) can be rewritten as

Message update (12) can be rewritten as

According to Propositions 1-3, the auxiliary variables [xvmn(t),vvmn(t)] and [xsmn(t),vsmn(t)] can be abandoned, and EP-MPA 1 to can be rewritten to the MMSE GAMP in Algorithm 2. Therefore, we have the following lemma.

EP-MPA is equivalent to MMSE GAMP.

Then, we have the following lemma.

EP-MPA can be rewritten to AMP.