We suggest an INARMA(1, 1) model with Poisson marginals which extends the INAR(1) in a similar way as the INGARCH(1, 1) does for the INARCH(1) model. The new model is equivalent to a binomially thinned INAR(1) process. This allows us to obtain some of its stochastic properties and use inference methods for hidden Markov models. The model is compared to various other models in two case studies. 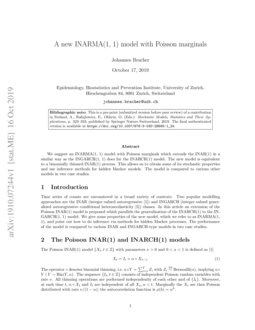 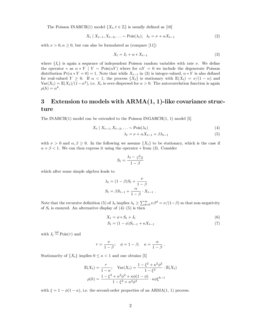 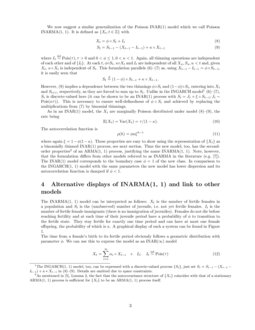 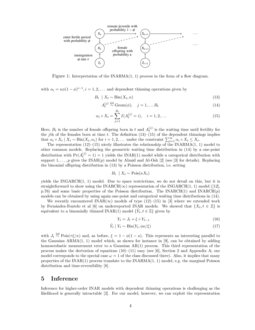 In a real life process evolving over time, the relationship between its ...
Carlos Puerto-Santana, et al. ∙

The conditional intensity (CI) of a counting process Y_t is based on the...
Mark Sinzger-D'Angelo, et al. ∙

Estimating the real burden of disease under a pandemic situation: The SARS-CoV2 case

The use of discrete material representation in numerical models is advan...
Jan Eliáš, et al. ∙

Time series of counts are encountered in a broad variety of contexts. Two popular modelling approaches are the INAR (integer-valued autoregressive [1]

[5]) classes. In this article an extension of the Poisson INAR(1) model is proposed which parallels the generalization of the INARCH(1) to the INGARCH(1, 1) model. We give some properties of the new model, which we refer to as INARMA(1, 1), and point out how to do inference via methods for hidden Markov processes. The performance of the model is compared to various INAR and INGARCH-type models in two case studies.

ν. All thinning operations are performed independently of each other and of {It}. Moreover, at each time t, α∘Xt and It are independent of all Xu,u<t. Marginally the Xt

are then Poisson distributed with rate

where {It} is again a sequence of independent Poisson random variables with rate ν. We define the operator ∗ as α∗Y∣Y∼Pois(αY) where for αY=0 we include the degenerate Poisson distribution Pr(α∗Y=0)=1. Note that while Xt−1 in (3) is integer-valued, α∗Y is also defined for real-valued Y≥0. If α<1, the process {Xt} is stationary with E(Xt)=ν/(1−α) and Var(Xt)=E(Xt)/(1−α2), i.e. Xt is over-dispersed for α>0. The autocorrelation function is again ρ(h)=αh.

with ν>0 and α,β≥0. In the following we assume {Xt} to be stationary, which is the case if α+β<1. We can then express it using the operator ∗ from (3). Consider

which after some simple algebra leads to

Note that the recursive definition (5) of λt implies λt≥∑∞d=0νβd=ν/(1−β) so that non-negativity of St is ensured. An alternative display of (4)–(5) is then

We now suggest a similar generalization of the Poisson INAR(1) model which we call Poisson INARMA(1, 1). It is defined as {Xt,t∈Z} with

However, (9) implies a dependence between the two thinnings ϕ∘St and (1−ϕ)∘St, entering into Xt and St+1, respectively, as they are forced to sum up to St. Unlike in the INGARCH model111The INGARCH(1, 1) model, too, can be expressed with a discrete-valued process {St}, just set St=St−1−(Xt−1−It−1)+κ∗Xt−1 in (8)–(9). Details are omitted due to space constraints. (6)–(7), St is discrete-valued here (it can be shown to be an INAR(1) process with St=Jt+ξ∘St−1;Jt∼Pois(κτ)). This is necessary to ensure well-definedness of ϕ∘St and achieved by replacing the multiplications from (7) by binomial thinnings.

As in an INAR(1) model, the Xt are marginally Poisson distributed under model (8)–(9), the rate being

The autocorrelation function is

where again ξ=1−ϕ(1−κ). These properties are easy to show using the representation of {Xt} as a binomially thinned INAR(1) process, see next section. Thus the new model, too, has the second-order properties222As mentioned in [5], Lemma 2, the fact that the autocovariance structure of {Xt} coincides with that of a stationary ARMA(1, 1) process is sufficient for {Xt} to be an ARMA(1, 1) process itself. of an ARMA(1, 1) process, justifying the name INARMA(1, 1). Note, however, that the formulation differs from other models referred to as INARMA in the literature (e.g. [7]). The INAR(1) model corresponds to the boundary case ϕ=1 of the new class. In comparison to the INGARCH(1, 1) model with the same parameters the new model has lower dispersion and its autocorrelation function is damped if ϕ<1.

4 Alternative displays of INARMA(1, 1) and link to other models

is the number of fertile female immigrants (there is no immigration of juveniles). Females do not die before reaching fertility and at each time of their juvenile period have a probability of

ϕ to transition to the fertile state. They stay fertile for exactly one time period and can have at most one female offspring, the probability of which is κ. A graphical display of such a system can be found in Figure 1.

ϕ. We can use this to express the model as an INAR(∞) model

Here, Bt is the number of female offspring born in t and A(j)t is the waiting time until fertility for the jth of the females born at time t. The definition (13)–(15) of the dependent thinnings implies that αi∘Xt∣Xt∼Bin(Xt,αi) for i=1,2,… under the constraint ∑∞i=1αi∘Xt≤Xt.

yields the INGARCH(1, 1) model. Due to space restrictions, we do not detail on this, but it is straightforward to show using the INARCH(∞) representation of the INGARCH(1, 1) model ([12], p.76) and some basic properties of the Poisson distribution. The INARCH(1) and INARCH(p) models can be obtained by using again one-point and categorical waiting time distributions in (14).

We recently encountered INAR(∞) models of type (12)–(15) in [3] where we extended work by Fernández-Fontelo et al [6] on underreported INAR models. We showed that {Xt,t∈Z} is equivalent to a binomially thinned INAR(1) model {~Yt,t∈Z} given by

with Jtiid∼Pois(τξ/κ) and, as before, ξ=1−ϕ(1−κ). This represents an interesting parallel to the Gaussian ARMA(1, 1) model which, as shown for instance in [9], can be obtained by adding homoscedastic measurement error to a Gaussian AR(1) process. This third representation of the process makes the derivation of equations (10)–(11) easy (see [6], Section 2 and Appendix A; our model corresponds to the special case ω=1 of the class discussed there). Also, it implies that many properties of the INAR(1) process translate to the INARMA(1, 1) model, e.g. the marginal Poisson distribution and time-reversibility [8].

Inference for higher-order INAR models with dependent thinning operations is challenging as the likelihood is generally intractable [2]. For our model, however, we can exploit the representation (16)–(17) as a binomially thinned INAR(1) process. As described in Fernández-Fontelo et al [6], Section 3.2, the forward algorithm [14], a standard method for inference in hidden Markov models, can be applied to evaluate the likelihood of this model (again note that our model corresponds to the special case ω=1 of the class treated in [6]). As the state space of the latent process {Yt} is infinite, truncation at some reasonably large value Ymax is required. The maximum of the log-likelihood is then obtained by numerical optimization.

We apply the four models from Sections 2 and 3 to two data sets. The first example consists of the gold particle counts from Westgren [13], a data set which is often used in the literature. For instance Weiß ([12], p.48) applies Poisson INAR(1), INAR(2) and CINAR(2) models to these data. To make our results comparable to these analyses we fit all models to observations 501–870 of Series (C). As a second example we use weekly counts of mumps in Bavaria, Germany, from week 1/2014 to week 52/2017 (downloaded from www.survstat.rki.de on 8 Oct 2018). Mumps, a viral disease, used to be a common childhood disease. Since the introduction of a vaccine in the 1950s it has become rare in Germany, but remains under routine surveillance. The data are displayed in Figure 2

shows parameter estimates and AIC values for the gold particle data. For comparison we added the results Weiß

[12] obtains for INAR(2) and CINAR(2) models (see there for details). To assess the out-of-sample predictive performance we computed mean log scores (¯¯¯¯¯¯¯¯¯¯¯logS, [4]) of one-step-ahead forecasts for the second half of the time series. For each of these forecasts the models were re-fitted to the data which were already available at the respective time point (“rolling forecast”). Note that the log score is negatively oriented, i.e. smaller values are better.

The INARMA(1, 1) model has the best in-sample and out-of-sample performance. Interestingly it also outperforms the two AR(2) models from [12], indicating that observations more than two time steps back still contain additional information.

The corresponding results for the mumps data can be found in Table 2. While the INARMA(1, 1) model again represents a considerable improvement compared to the INAR(1), the INGARCH(1, 1) model performs best. This is not surprising given the overdispersion in the data.

We suggested an INARMA(1, 1) model with Poisson marginals which draws conceptually from the INGARCH(1, 1) model [5] and the INAR(p) model by Al-Osh and Alzaid [2]. We provided an alternative representation in terms of an offspring distribution and a waiting time distribution which enlightens the close relation to several existing models from the literature. A third representation as a binomially thinned INAR(1) process turned out to be useful for inference and to obtain some stochastic properties. In our case studies the model performed favourably for equidispersed data. For overdispersed data it outperformed the INAR(1) model, but achieved lower performance than the INGARCH(1, 1) model. This raises the question how overdispersion could be accommodated in the model. Alternative immigration distributions could be considered, but the model would then no longer have a representation as a binomially thinned version of a Markov process. Obtaining its stochastic properties and evaluating the likelihood would get more involved. Another open question is how higher-order INARMA(p,q) models could be defined.

Data and code Data and R code are available at github.com/jbracher/inarma.

Acknowledgements The author thanks Christian H. Weiß for helpful feedback.