A new Gini correlation between quantitative and qualitative variables 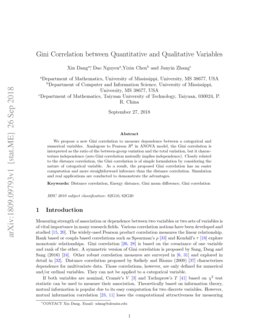 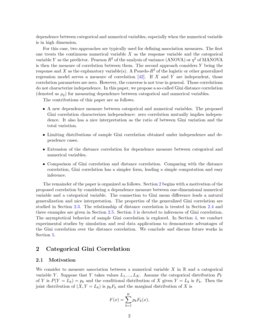 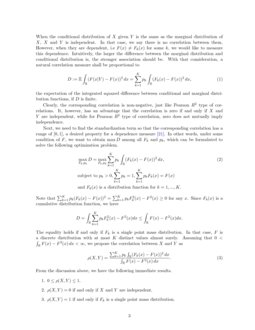 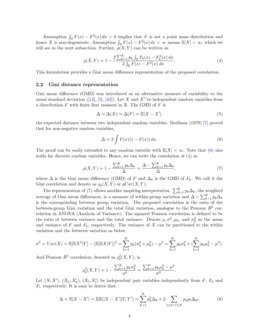 Measuring strength of association or dependence between two variables or two sets of variables is of vital importance in many research fields. Various correlation notions have been developed and studied [15, 20]. The widely-used Pearson product correlation measures the linear relationship. Rank based or coupla based correlations such as Spearman’s ρ [33] and Kendall’s τ [16] explore monotonic relationships. Gini correlation [26, 28] is based on the covariance of one variable and rank of the other. A symmetric version of Gini correlation is proposed by Sang, Dang and Sang (2016) [24]. Other robust correlation measures are surveyed in [6, 31] and explored in detail in [32]. Distance correlation proposed by Székely and Riozzo (2009) [37]

characterizes dependence for multivariate data. Those correlations, however, are only defined for numerical and/or ordinal variables. They can not be applied to a categorical variable.

If both variables are nominal, Cramér’s V [3] and Tschuprow’s T [41] based on χ2test statistic can be used to measure their association. Theoretically based on information theory, mutual information is popular due to its easy computation for two discrete variables. However, mutual information correlation [23, 11] loses the computational attractiveness for measuring dependence between categorical and numerical variables, especially when the numerical variable is in high dimension.

For this case, two approaches are typically used for defining association measures. The first one treats the continuous numerical variable X

as the response variable and the categorical variable

Y as the predictor. Pearson R2

of the analysis of variance (ANOVA) or

η2 of MANOVA is then the measure of correlation between them. The second approach considers Y being the response and X as the explanatory variable(s). A Psuedo-R2 of the logistic or other generalized regression model serves a measure of correlation [42]. If X and Y are independent, those correlation parameters are zero. However, the converse is not true in general. Those correlations do not characterize independence. In this paper, we propose a so-called Gini distance correlation (denoted as ρg) for measuring dependence between categorical and numerical variables.

The contributions of this paper are as follows.

. Then the joint distribution of

(X,Y=Lk) is pkFk and the marginal distribution of X is

the expectation of the integrated squared difference between conditional and marginal distribution functions, if D is finite.

Next, we need to find the standardization term so that the corresponding correlation has a range of [0,1], a desired property for a dependence measure [21]. In other words, under some condition of F, we want to obtain maxD among all Fk and pk, which can be formulated to solve the following optimization problem.

is a cumulative distribution function, we have

The equality holds if and only if Fk is a single point mass distribution. In that case, F is a discrete distribution with at most K distinct values almost surely. Assuming that 0<∫RF(x)−F2(x)dx<∞, we propose the correlation between X and Y as

From the discussion above, we have the following immediate results.

This formulation provides a Gini mean difference representation of the proposed correlation.

be independent random variables from a distribution

with finite first moment in

The proof can be easily extended to any random variable with E|X|<∞. Note that (6

) also holds for discrete random variables. Hence, we can write the correlation of (

where Δ is the Gini mean difference (GMD) of F and Δk is the GMD of Fk. We call it the Gini correlation and denote as ρg(X,Y) or gCor(X,Y).

The representation of (7) allows another inspiring interpretation. ∑Kk=1pkΔk, the weighted average of Gini mean differences, is a measure of within-group variation and Δ−∑Kk=1pkΔk is the corresponding between group variation. The proposed correlation is the ratio of the between-group Gini variation and the total Gini variation, analogue to the Pearson R2 correlation in ANOVA (Analysis of Variance). The squared Pearson correlation is defined to be the ratio of between variance and the total variance. Denote μ,σ2,μk, and σ2k as the mean and variance of F and Fk, respectively. The variance of X can be partitioned to the within variation and the between variation as below,

And Pearson R2 correlation, denoted as ρ2p(X,Y), is

Let (X,X′), (Xk,X′k), (Xl,X′l) be independent pair variables independently from F, Fk and Fl, respectively. It is easy to derive that

where Δk=E|Xk−X′k| and Δkl=E|Xk−Xl|. Then the between Gini variation, denoted as the Gini distance covariance between X and Y, is

and the Gini distance correlation between X and Y is

There are two multivariate generalizations for the Gini mean difference. One is the Gini covariance matrix proposed by Dang, Sang and Weatherall (2016) [4]. Along this line, one may extend the Gini correlation based on an analog of Wilk’s lamda or Hotelling-Lawley trace in MANOVA. That leaves for future work. Here we explore another generalization defined in [17]. That is, the Gini mean difference of a distribution F in Rd is

or even more generally for some α,

where ∥\boldmath{x}∥ is the Euclidean norm of x. With this generalized multivariate Gini mean difference (11), we can define the Gini correlation in (4) as follows.

For a non-degenerate random vector

X in Rd and a categorical variable Y, if E∥\boldmath{X}∥α<∞ for α∈(0,2), the Gini correlation of X and Y is defined as

where Δk(α) and Δ(α) are the generalized Gini differences of distribution Fk and F, respectively.

Note that a small α>0 provides a weak assumption of E∥\boldmath{X}∥α<∞ on distributions, which allows applications of the Gini correlation to heavy-tailed distributions.

The requirement of α∈(0,2) is for desired properties of the Gini correlation.

The next theorem states the properties of the proposed Gini correlation.

For a categorical variable Y and a continuous random vector X in Rd with E∥\boldmath{X}∥α<∞ for 0<α<2, ρg(\boldmath{X},Y;α) has following properties.

Properties 3 and 4 immediately follow from the definition. First of all, Δk(α)≥0 so we have ρg(\boldmath{X},Y;α)≤1. It is obvious that ρg(\boldmath{X},Y;α)=1 if and only if Δk(α)=0 for each k, which mutually implies that Fk is a singleton distribution. Orthogonal invariance of the Property 4 is a result from the Euclidean distance used in Gini correlation. It remains invariant under under rotation, translation and homogeneous scale change. The remaining part of the proof has two steps. In Step 1, let (\boldmath{X},\boldmath{X}′) and (\boldmath{X}k,\boldmath{X}′k) are independent pairs from F and Fk, respectively. We can write

are the characteristic functions of

\boldmath{X}k and X, respectively, and c(d,α) is a constant only depending on d and α, i.e.,

which is proportional to T(\boldmath{X}1,\boldmath{X}2;α), the energy distance used in [38, 39]. Székely and Rizzo [34] considered a special case of the energy distance of α=1 and proposed a test for the equality of two distributions F1 and F2, which is also studied in [1]. The test is equivalent to test ρg(\boldmath{X},Y;α)=0. The test of ρg(\boldmath{X},Y;α)=0 is also used for the K-sample problem. In that case, it is equivalent to the test of DISCO (DIStance COmponent) analysis in [22]. The test statistic in DISCO takes the ratio of the between and the within group Gini variations for the K-sample problem. Testing ρg=0 is equivalent to their one-way DISCO analysis. What we contribute in the dependence test is that our test is able to provide power analysis for a particular alternative which is specified as ρg=ρ0 where ρ0>0

. Also, we can have a test which controls Type-II error rather than Type-I error.

The proposed Gini correlation is closely related to but different from the distance correlation studied by Székely, Rizzo and Bakirov (2007) [36], Székely and Rizzo (2009) [37]

[19]. Based on that idea, we define the discrete metric

Before we discuss their computation and inference, let first demonstrate the Gini correlation and distance correlation in several examples for K=2.

As we see, the formula of dCov(X,X) is complicated for the 2-component exponential mixture distribution. The correlations are given as follows.

For a mixture of two normal distributions with a same standard deviation but different means, independence of X and Y is equivalent to either p=0,p=1 in (a) or a=0 in (b) for both correlations, which is demonstrated in Figure 2. For dependence cases, the squared Pearson correlation is larger than the Gini correlation.

Example 3. Let F1=Normal(μ,σ21), F2=Normal(μ,σ22) and r=σ2/σ1. Again, it is too complicate to derive the formula of dCov(X,X) in this example. Since two distributions have a same mean, ρ2p(X,Y) is always 0 and hence it completely fails to measure the difference of two distributions when σ1≠σ2. For the Gini correlation, we have

Suppose a sample data D={(\boldmath{x}i,yi)} for i=1,...,n available. The sample counterparts can be easily computed. Let Ik be the index set of sample points with yi=Lk, then pk

is estimated by the sample proportion of that category, that is,

^pk=nkn where nk is the number of elements in Ik. With a given α∈(0,2), a point estimator of ρg(α) is given as follows.

Clearly, ^Δk(α) and ^Δ(α) are U-statistics of size 2. Applying the U-statistic theorem [13, 27], we are able to establish asymptotic properties of ^Δk(α) and ^Δ(α). The limiting distribution of the sample Gini correlation is obtained, depending on whether ^Δ(α)−∑Kk=1^pk^Δk(α) is degenerate. We have the following theorems.

with probability 1. Also by the almost sure behavior of

where v2g is the asymptotic variance given in the proof.