A New Geometric Approach to Latent Topic Modeling and Discovery

A new geometrically-motivated algorithm for nonnegative matrix factorization is developed and applied to the discovery of latent "topics" for text and image "document" corpora. The algorithm is based on robustly finding and clustering extreme points of empirical cross-document word-frequencies that correspond to novel "words" unique to each topic. In contrast to related approaches that are based on solving non-convex optimization problems using suboptimal approximations, locally-optimal methods, or heuristics, the new algorithm is convex, has polynomial complexity, and has competitive qualitative and quantitative performance compared to the current state-of-the-art approaches on synthetic and real-world datasets. 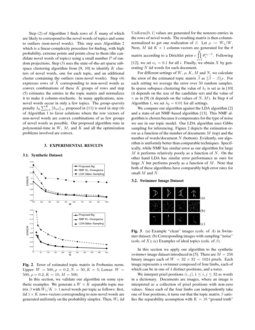 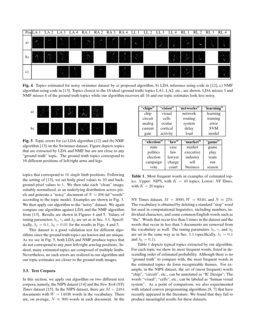 Topic modeling is a statistical tool for the automatic discovery and comprehension of latent thematic structure or topics, assumed to pervade a corpus of documents.

Suppose that we have a corpus of M documents composed of words from a vocabulary of W distinct words indexed by w=1,…,W. In the classic “bags of words” modeling paradigm widely-used in Probabilistic Latent Semantic Analysis [1] and Latent Dirichlet Allocation (LDA) [2, 3], each document is modeled as being generated by N independent and identically distributed (iid) drawings of words from an unknown W×1

probabilistic mixture of K<min(M,W) unknown W×1 latent topic word-distribution vectors that are shared among the M

documents in the corpus. The goal of topic modeling then is to estimate the latent topic word-distribution vectors and possibly the topic mixing weights for each document from the empirical word-frequency vectors of all documents. Topic modeling has also been applied to various types of data other than text, e.g., images, videos (with photometric and spatio-temporal feature-vectors interpreted as the words), genetic sequences, hyper-spectral images, voice, and music, for signal separation and blind deconvolution.

If β denotes the unknown W×K topic-matrix whose columns are the K latent topic word-distribution vectors and θ denotes the K×M weight-matrix whose M columns are the mixing weights over K topics for the M documents, then each column of the W×M matrix A=βθ corresponds to a document word-distribution vector. Let X denote the observed W×M words-by-documents matrix whose M columns are the empirical word-frequency vectors of the M documents when each document is generated by N iid drawings of words from the corresponding column of the A matrix. Then given only X and K, the goal is to estimate the topic matrix β and possibly the weight-matrix θ. This can be formulated as a nonnegative matrix factorization (NMF) problem [4, 5, 6, 7] where the typical solution strategy is to minimize a cost function of the form

where the regularization term ψ is introduced to enforce desirable properties in the solution such as uniqueness of the factorization, sparsity, etc. The joint optimization of (1) with respect to (β,θ) is, however, non-convex and necessitates the use of suboptimal strategies such as alternating minimization, greedy gradient descent, local search, approximations, and heuristics. These are also typically sensitive to small sample sizes (words per document) N especially when N≪W because many words may not be sampled and X may be far from A in Euclidean distance. In LDA, the columns of β and θ are modeled as iid random drawings from Dirichlet prior

(β,θ), however, turns out to be a fairly complex non-convex problem. One then takes recourse to sub-optimal solutions based on variational Bayes approximations of the posterior distribution and other methods based on Gibbs sampling and expectation propagation.

In contrast to these approaches we adopt the non-negative matrix factorization framework and propose a new geometrically motivated algorithm that has competitive performance compared to the current state-of-the art and is free of heuristics and approximations.

A key ingredient of the new approach is the so-called “separability” assumption introduced in [5] to ensure the uniqueness of nonnegative matrix factorization. Applied to β this means that each topic contains “novel” words which appear only in that topic – a property that has been found to hold in the estimates of topic matrices produced by several algorithms [8]. More precisely, A W×K topic matrix β is separable if for each k∈[1,K], there exists a row of β that has a single non-zero entry which is in the k-th column. Figure 1 shows an example of a separable topic matrix with three topics. Words 1 and 2 are unique (novel) to topic 1, words 3, 4 to topic 2, and word 5 to topic 3.

The reality, however, is that we only have access to X, not A. The above algorithm when applied to X would work well if X is close to A which would happen if N is large. When N is small, two problems arise: (i) Points corresponding to novel words of the same topic may become multiple extreme points and may be far from each other (e.g., ˜X1,˜X2 and ˜X3,˜X4 in Fig. 1

Step (2) of Algorithm 1 finds rows of ~X many of which are likely to correspond to the novel words of topics and some to outliers (non-novel words). This step uses Algorithm 2 which is a linear-complexity procedure for finding, with high probability, extreme points and points close to them (the candidate novel words of topics) using a small number P of random projections. Step (3) uses the state-of-the-art sparse subspace clustering algorithm from [9, 10] to identify K clusters of novel words, one for each topic, and an additional cluster containing the outliers (non-novel words). Step (4) expresses rows of ˜X corresponding to non-novel words as convex combinations of these K groups of rows and step (5) estimates the entries in the topic matrix and normalizes it to make it column-stochastic. In many applications, non-novel words occur in only a few topics. The group-sparsity penalty λ2∑Kl=1∥bwl∥∞ proposed in [11] is used in step (4) of Algorithm 1 to favor solutions where the row vectors of non-novel words are convex combinations of as few groups of novel words as possible. Our proposed algorithm runs in polynomial-time in W, M, and K and all the optimization problems involved are convex.

In this section, we validate our algorithm on some synthetic examples. We generate a W×K separable topic matrix β with W1/K>1 novel words per topic as follows: first, iid 1×K rows-vectors corresponding to non-novel words are generated uniformly on the probability simplex. Then, W1 iid Uniform[0,1] values are generated for the nonzero entries in the rows of novel words. The resulting matrix is then column-normalized to get one realization of β. Let ρ:=W1/W. Next, M iid K×1 column-vectors are generated for the θ matrix according to a Dirichlet prior cK∏i=1θαi−1i. Following [12], we set αi=0.1 for all i. Finally, we obtain X by generating N iid words for each document.

For different settings of W, ρ, K, M and N, we calculate the error of the estimated topic matrix ˆβ as ∥ˆβ−β∥F. For each setting we average the error over 50 random samples. In sparse subspace clustering the value of λ1 is set as in [10] (it depends on the size of the candidate set) and the value of γ as in [9] (it depends on the values of N,M). In Step 4 of Algorithm 1, we set λ2=0.01 for all settings.

We compare our algorithm against the LDA algorithm [2] and a state-of-art NMF-based algorithm [13]. This NMF algorithm is chosen because it compensates for the type of noise we use in our topic model. Our LDA algorithm uses Gibbs sampling for inferencing. Figure 2 depicts the estimation error as a function of the number of documents M (top) and the number of words/document N (bottom). Evidently, our algorithm is uniformly better than comparable techniques. Specifically, while NMF has similar error as our algorithm for large M it performs relatively poorly as a function of N. On the other hand LDA has similar error performance as ours for large N but performs poorly as a function of M. Note that both of these algorithms have comparably high error rates for small M and N.

In this section we apply our algorithm to the synthetic swimmer image dataset introduced in [5]. There are M=256 binary images each of W=32×32=1024 pixels. Each image represents a swimmer composed of four limbs, each of which can be in one of 4 distinct positions, and a torso.

We interpret pixel positions (i,j),1≤i,j≤32 as words in a dictionary. Documents are images, where an image is interpreted as a collection of pixel positions with non-zero values. Since each of the four limbs can independently take one of four positions, it turns out that the topic matrix β satisfies the separability assumption with K=16 “ground truth” topics that correspond to 16 single limb positions. Following the setting of [13], we set body pixel values to 10 and background pixel values to 1. We then take each “clean” image, suitably normalized, as an underlying distribution across pixels and generate a “noisy” document of N=200 iid “words” according to the topic model. Examples are shown in Fig. 3. We then apply our algorithm to the “noisy” dataset. We again compare our algorithm against LDA and the NMF algorithm from [13]. Results are shown in Figures 4 and 5. Values of tuning parameters λ1,γ, and λ2 are set as in Sec. 3.1. Specifically, λ1=0.1,λ2=0.01 for the results in Figs. 4 and 5.

This dataset is a good validation test for different algorithms since the ground truth topics are known and are unique. As we see in Fig. 5, both LDA and NMF produce topics that do not correspond to any pure left/right arm/leg positions. Indeed, many estimated topics are composed of multiple limbs. Nevertheless, no such errors are realized in our algorithm and our topic-estimates are closer to the ground truth images.

In this section, we apply our algorithm on two different text corpora, namely, the NIPS dataset [14] and the New York (NY) Times dataset [15]. In the NIPS dataset, there are M=2484 documents with W=14036 words in the vocabulary. There are, on average, N≈900 words in each document. In the NY Times dataset, M=3000, W=9340, and N≈270. The vocabulary is obtained by deleting a standard “stop” word list used in computational linguistics, including numbers, individual characters, and some common English words such as “the”. Words that occur less than 5 times in the dataset and the words that occur in less than 5 documents are removed from the vocabulary as well. The tuning parameters λ1,γ, and λ2 are set in the same way as in Sec. 3.1 (specifically, λ1=0.1 and λ2=0.1).

Table 1 depicts typical topics extracted by our algorithm. For each topic we show its most frequent words, listed in descending order of estimated probability. Although there is no “ground truth” to compare with, the most frequent words in the estimated topics do form recognizable themes. For example, in the NIPS dataset, the set of (most frequent) words “chip”, “circuit”, etc., can be annotated as “IC Design”; The words “visual”, “cells”, etc., can be labeled as “human visual system”. As a point of comparison, we also experimented with related convex programming algorithms [8, 7] that have recently appeared in the literature. We found that they fail to produce meaningful results for these datasets.