This paper provides a new abstract stability result for perturbed saddle-point problems which is based on a proper norm fitting. We derive the stability condition according to Babuška's theory from a small inf-sup condition, similar to the famous Ladyzhenskaya-Babuška-Brezzi (LBB) condition, and the other standard assumptions in Brezzi's theory under the resulting combined norm. The proposed framework allows to split the norms into proper seminorms and not only results in simpler (shorter) proofs of many stability results but also guides the construction of parameter robust norm-equivalent preconditioners. These benefits are demonstrated with several examples arising from different formulations of Biot's model of consolidation. 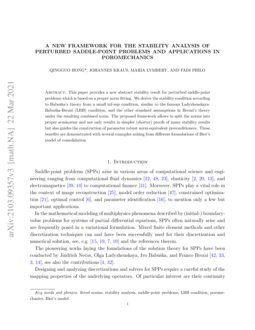 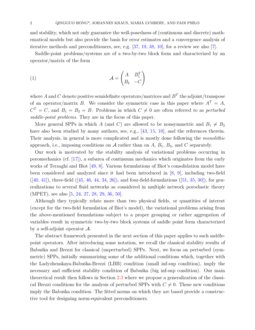 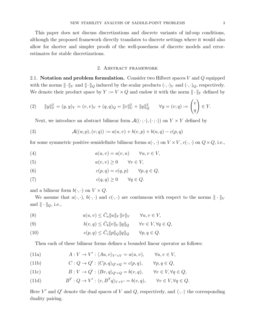 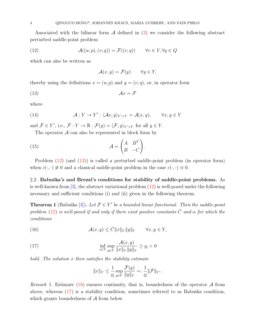 Concentration of the Frobenius norms of pseudoinverses

In many applications it is useful to replace the Moore-Penrose pseudoinv...
Ivan Dokmanić, et al. ∙

Concentration of the Frobenius norms of generalized matrix inverses

In many applications it is useful to replace the Moore-Penrose pseudoinv...
Ivan Dokmanić, et al. ∙

Analysis of an abstract mixed formulation for viscoelastic problems

This paper addresses the problem of proposing a model of norms and a fra...
Nicoletta Fornara, et al. ∙

In the mathematical modeling of multiphysics phenomena described by (initial-) boundary-value problems for systems of partial differential equations, SPPs often naturally arise and are frequently posed in a variational formulation. Mixed finite element methods and other discretization techniques can and have been successfully used for their discretization and numerical solution, see, e.g.

The pioneering works laying the foundations of the solution theory for SPPs have been conducted by Jindřich Nečas, Olga Ladyzhenskaya, Ivo Babuška, and Franco Brezzi [42, 33, 3, 14], see also the contributions [4, 32].

Designing and analyzing discretizations and solvers for SPPs require a careful study of the mapping properties of the underlying operators. Of particular interest are their continuity and stability, which not only guarantee the well-posedness of (continuous and discrete) mathematical models but also provide the basis for error estimates and a convergence analysis of iterative methods and preconditioners, see, e.g.

where A and C denote positive semidefinite operators/matrices and BT the adjoint/transpose of an operator/matrix B. We consider the symmetric case in this paper where AT=A, CT=C, and B1=B2=B. Problems in which C≠0 are often referred to as perturbed saddle-point problems. They are in the focus of this paper.

More general SPPs in which A (and C) are allowed to be nonsymmetric and B1≠B2 have also been studied by many authors, see, e.g., [43, 15, 10], and the references therein. Their analysis, in general is more complicated and is mostly done following the monolithic approach, i.e., imposing conditions on A rather than on A, B1, B2, and C separately.

Although they typically relate more than two physical fields, or quantities of interest (except for the two-field formulation of Biot’s model), the variational problems arising from the above-mentioned formulations–subject to a proper grouping or rather aggregation of variables–result in symmetric two-by-two block systems of saddle point form characterized by a self-adjoint operator A.

The abstract framework presented in the next section of this paper applies to such saddle-point operators. After introducing some notation, we recall the classical stability results of Babuška and Brezzi for classical (unperturbed) SPPs. Next, we focus on perturbed (symmetric) SPPs, initially summarizing some of the additional conditions which, together with the Ladyzhenskaya-Babuška-Brezzi (LBB) condition (small inf-sup condition), imply the necessary and sufficient stability condition of Babuška (big inf-sup condition). Our main theoretical result then follows in Section 2.3 where we propose a generalization of the classical Brezzi conditions for the analysis of perturbed SPPs with C≠0. These new conditions imply the Babuška condition. The fitted norms on which they are based provide a constructive tool for designing norm-equivalent preconditioners.

This paper does not discuss discretizations and discrete variants of inf-sup conditions, although the proposed framework directly translates to discrete settings where it would also allow for shorter and simpler proofs of the well-posedness of discrete models and error-estimates for stable discretizations.

Consider two Hilbert spaces V and Q equipped with the norms ∥⋅∥V and ∥⋅∥Q induced by the scalar products (⋅,⋅)V and (⋅,⋅)Q, respectively. We denote their product space by Y:=V×Q and endow it with the norm ∥⋅∥Y defined by

Then each of these bilinear forms defines a bounded linear operator as follows:

Here V′ and Q′ denote the dual spaces of V and Q, respectively, and ⟨⋅,⋅⟩ the corresponding duality pairing.

thereby using the definitions x=(u;p) and y=(v;q), or, in operator form

The operator A can also be represented in block form by

As is well-known from [3], the abstract variational problem (12) is well-posed under the following necessary and sufficient conditions (i) and (ii) given in the following theorem.

Let F∈Y′ be a bounded linear functional. Then the saddle-point problem (12) is well-posed if and only if there exist positive constants ¯C and α for which the conditions

hold. The solution x then satisfies the stability estimate

Estimate (16) ensures continuity, that is, boundedness of the operator A from above, whereas (17) is a stability condition, sometimes referred to as Babuška condition, which grants boundedness of A from below.

For the classical saddle-point problem, i.e., c(⋅,⋅)≡0, the following theorem which we formulate under the conditions that a(⋅,⋅) is symmetric positive semidefinite and

Note that if Ker(BT)≠∅, the statement of the above theorem (Theorem 2) remains valid if we identify any two elements q1, q2 for which q0:=q1−q2 is an element of Ker(BT), i.e., replacing the space Q with the quotient space Q/Ker(BT) and also the norm ∥⋅∥Q with ∥⋅∥Q/Ker(BT), the latter being defined by

In this case, the solution p is only unique up to an arbitrary element p0∈Ker(BT).

Obviously, the stability condition (17) directly applies to perturbed saddle-point problems, a reason why they can be studied using Babuška’s theory. However, conditions (19) and (20) together with the continuity of a(⋅,⋅), b(⋅,⋅) and c(⋅,⋅) in general are not sufficient to guarantee the stability condition (17) when c(⋅,⋅)≢0. Additional conditions to ensure (17) have been studied, for example in [15, 12, 10].

In [15] it has been shown that a condition on the kernel of BT can be used as an additional assumption to ensure well-posedness of the perturbed saddle-point problem, that is, in particular, for Babuška’s inf-sup condition (17) to hold. This condition is expressed in terms of the following auxiliary problem

and requires the following general assumption:

The theorem then reads as follows:

and provides a specific choice of ∥⋅∥Y, i.e., . The corresponding theorem then reads as:

Note that as it can easily be seen if a(⋅,⋅) is symmetric positive semidefinite, condition (23) is equivalent to the condition that there exists a constant γ′>0 such that

Moreover, as shown in [12], then (25) is also equivalent to the condition that there exists a constant γ′′>0 such that

Since (23) is an inf-sup condtion for (a(⋅,⋅)+b(⋅,⋅)) which can be interpreted as a big inf-sup condition on A for p=0 under the specific norm , see (26), Theorem 4 still does not provide us with the desired stability result in terms of conditions on a(⋅,⋅), b(⋅,⋅) and c(⋅,⋅) separately. On the other hand, Theorem 3 requires the solution of the auxiliary problem (21) on Ker(BT) for which one has to verify Assumption 1 which, in some situations, is a difficult task.

Our aim is to avoid the latter and still impose Brezzi-type conditions, in particular a small inf-sup condition on b(⋅,⋅). In the next section, we will prove a theorem (Theorem 5) which ensures the stability of the perturbed saddle-point problem (12) under conditions which are equivalent to the conditions in Brezzi’s theorem (Theorem 2) when the perturbation term vanishes. Moreover, our approach provides a framework suited for finding norms in which stability can be shown and allows for simplifying and shortening proofs based on the result of Babuška.

2.3. A new framework for the stability analysis of perturbed saddle-point problems

The key idea for studying and verifying the stability of perturbed saddle-point problems we follow in this paper is to construct proper norms as part of an abstract framework which applies to a variational formulation of various multiphysics models. As we have already observed in the previous subsection, a norm-splitting of the form (22) is quite natural if the symmetric positive semidefinite perturbation form c(⋅,⋅) is not identical to zero. For fixed t>0, the norm defined in (22) is equivalent to the norm defined by

where ¯Q:Q→Q′ is a linear operator, which follows from the fact that the norm ∥⋅∥Q is induced by the scalar product (⋅,⋅)Q on the Hilbert space Q. Now we introduce the following splitting of the norm ∥⋅∥V defined by

where |⋅|V is a proper seminorm, which is a norm on Ker(B) satisfying

Note that both |⋅|V and |⋅|b can be seminorms as long as they add up to a full norm. Likewise, only the sum of the seminorms |⋅|Q and c(⋅,⋅) has to define a norm. In some particular situations, it is also useful to identify certain of the involved seminorms with 0, in which case the corresponding splitting becomes a trivial splitting. The splitting (28) is closely related to a Schur complement type operator, corresponding to the modified (regularized) bilinear form resulting from A((⋅;⋅),(⋅;⋅)) by replacing c(⋅,⋅) with (⋅,⋅)Q.

In order to present our main theoretical result, we give the following definition.

Two norms ∥⋅∥Q and ∥⋅∥V on the Hilbert spaces Q and V are called fitted if they satisfy the splittings (27) and (28), respectively, where |⋅|Q is a seminorm on Q and |⋅|V and |⋅|b are seminorms on V, the latter defined according to (29).

and that there exists a constant β––>0 such that

The continuity of b(⋅,⋅) readily follows from

If |⋅|V is induced by the bilinear form a(⋅,⋅) then the continuity of a(⋅,⋅) also follows directly from the definition of the fitted norms.

Demonstrating (16) is straightforward since

In order to prove (17) for a positive constant δ, which will be selected later, we choose

where u0∈V is such that

Note that the existence of an element u0 satisfying (37) follows from (31).

Moreover, for the same choice of v and q, we obtain

Together,  (42) and (43) imply the inf-sup condition (17) which can equivalently be formulated as

if we insert any fixed (v;q), in particular the choice we made and for which we proved

The statement of Theorem 5 remains valid if the norms ∥⋅∥Q and ∥⋅∥V, as defined in (27) and (28), are replaced with equivalent norms ∥⋅∥Q,c≂∥⋅∥Q and ∥⋅∥V,b≂∥⋅∥V, hence using ∥⋅∥V,b in (31) in this case. The proof remains unchanged and the only difference in the final result is that the inf-sup constant α–– in (44) with respect to the (new) equivalent combined norm has to be scaled by the quotient of the constants in the norm equivalence relation for the combined norms. For that reason, without loss of generality, we can use the fitted norms defined by (27) and (28) directly in the formulation of the theorem.

In this section we consider several mixed variational problems arising in the context of modeling flow in and deformation of porous media. All examples except the first two are based on different formulations of Biot’s consolidation model. Here, we use bold letters to denote vector-valued functions and the spaces to which they belong which means that we identify certain non-bold symbols from the abstract framework in the previous section with bold symbols, e.g.,

v=v. To prove stability of these formulations, we assume that proper boundary conditions are imposed and the following classical inf-sup conditions, see [14], also [15, 10], for the pairs of spaces (V,Q) hold, i.e., there exist constants βd and βs such that

The first example, taken from [11], is the mixed variational problem resulting from a weak formulation of a generalized Poisson equation

Finally, we have to verify condition (31) in Theorem 5, namely

which follows directly from the classical inf-sup condition (45) on the spaces (V,Q) since t≥0.

The second example we consider is taken from [34]. Its mixed variational formulation is given by