This paper is devoted to a new first order Taylor-like formula where the corresponding remainder is strongly reduced in comparison with the usual one which which appears in the classical Taylor's formula. To derive this new formula, we introduce a linear combination of the first derivatives of the concerned function which are computed at n+1 equally spaced points between the two points where the function has to be evaluated. Therefore, we show that an optimal choice of the weights of the linear combination leads to minimize the corresponding remainder. Then, we analyze the Lagrange P_1- interpolation error estimate and also the trapezoidal quadrature error to assess the gain of accuracy we get due to this new Taylor-like formula. 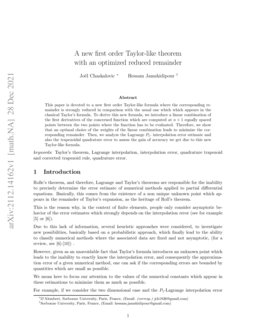 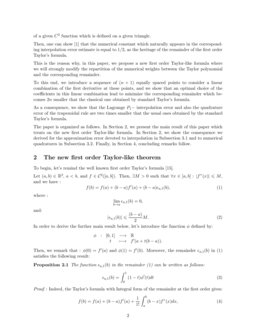 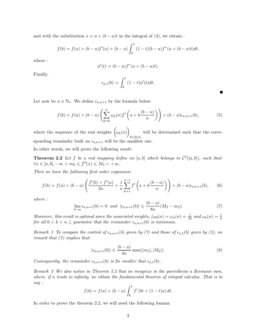 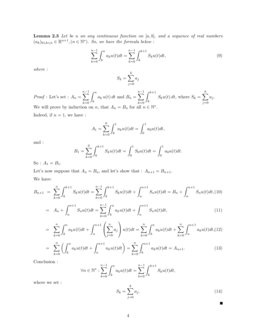 On an optimal interpolation formula in K_2(P_2) space

The paper is devoted to the construction of an optimal interpolation for...
S. S. Babaev, et al. ∙

The Gamma Function via Interpolation

The Lanczos formula for the Gamma function is used in many software libr...
Matthew F Causley, et al. ∙

A parametrized Poincare-Hopf Theorem and Clique Cardinalities of graphs

Given a locally injective real function g on the vertex set V of a finit...
Oliver Knill, et al. ∙

We tackle the problem of establishing the soundness of approximate bisim...
Massimo Bartoletti, et al. ∙

Rolle’s theorem, and therefore, Lagrange and Taylor’s theorems are responsible for the inability to precisely determine the error estimate of numerical methods applied to partial differential equations. Basically, this comes from the existence of a non unique unknown point which appears in the remainder of Taylor’s expansion, as the heritage of Roll’s theorem.

This is the reason why, in the context of finite elements, people only consider asymptotic behavior of the error estimates which strongly depends on the interpolation error (see for example [5] or [6]).

Due to this lack of information, several heuristic approaches were considered, to investigate new possibilities, basically based on a probabilistic approach, which finally lead to the ability to classify numerical methods where the associated data are fixed and not asymptotic, (for a review, see

[6]-[10]) . However, given as an unavoidable fact that Taylor’s formula introduces an unknown point which leads to the inability to exactly know the interpolation error, and consequently the approximation error of a given numerical method, one can ask if the corresponding errors are bounded by quantities which are small as possible. We mean here to focus our attention to the values of the numerical constants which appear in these estimations to minimize them as much as possible. For example, if we consider the two dimensional case and the P1-Lagrange interpolation error of a given C2 function which is defined on a given triangle. Then, one can show [1] that the numerical constant which naturally appears in the corresponding interpolation error estimate is equal to 1/2, as the heritage of the remainder of the first order Taylor’s formula. This is the reason why, in this paper, we propose a new first order Taylor-like formula where we will strongly modify the repartition of the numerical weights between the Taylor polynomial and the corresponding remainder. To this end, we introduce a sequence of (n+1) equally spaced points to consider a linear combination of the first derivative at these points, and we show that an optimal choice of the coefficients in this linear combination lead to minimize the corresponding remainder which becomes 2n smaller that the classical one obtained by standard Taylor’s formula. As a consequence, we show that the Lagrange P1− interpolation error and also the quadrature error of the trapezoidal rule are two times smaller that the usual ones obtained by the standard Taylor’s formula. The paper is organized as follows. In Section 2, we present the main result of this paper which treats on the new first order Taylor-like formula. In Section 2, we show the consequence we derived for the approximation error devoted to interpolation in Subsection 3.1 and to numerical quadratures in Subsection 3.2. Finally, in Section 4, concluding remarks follow.

In order to derive the further main result below, let’s introduce the function ϕ defined by:

The function ϵa,1(b) in the remainder (1) can be written as follows:

Proof : Indeed, the Taylor’s formula with Integral form of the remainder at the first order gives:

Let now be n∈N∗. We define ϵa,n+1 by the formula below:

where the sequence of the real weights (ωk(n))k∈[0,n] will be determined such that the corresponding remainder built on ϵa,n+1 will be the smallest one. In other words, we will prove the following result:

We also notice in Theorem 2.2 that we recognize in the parenthesis a Riemann sum, where, if n tends to infinity, we obtain the fundamental theorem of integral calculus. That is to say :

In order to prove the theorem 2.2, we will need the following lemma:

Let be u an any continuous function on [a,b], and a sequence of real numbers (ak)0⩽k⩽n∈Rn+1,(n∈N∗). So, we have the formula below :

which can be written by a simple substitution:

Therefore, to derive a double inequality on ϵa,n+1(b), we cut the last integral in (19) as follows:

Since we also have the two following results:

where we defined the two polynomials P1(λ) and P2(λ) by:

and finally, by summing on k between 0 to n, we have:

and the corresponding weights ωk(n) are equal to:

which completes the proof of Theorem 2.2.

3 Application to the approximation error

To give added value of Theorem 2.2 presented in the previous section, this paragraph is devoted to appreciate the resulting differences one can observe in two main applicative contexts which belong to numerical analysis. The first one concerns the Lagrange polynomial interpolation and the second one the numerical quadrature. In these two cases, we will evaluate the corresponding approximation error by the help of the standard first order Taylor’s formula, on the first hand, and by the generalized formula (6) derived in Theorem 2.2, on the other hand.

In this section we consider the first application of the generalized Taylor-like expansion (6) when n=1. In this case, for any function f which belongs to C2([a,b]), formula (6) can be written :

As a first application of formula (31)-(32), we will consider the particular case of the P1-Lagrange interpolation (see [11] or [14]) which consists to interpolate a given function f on [a,b] by a polynomial Π[a,b](f) of degree less than or equal to one. Then, the corresponding polynomial of interpolation Π[a,b](f) is therefore given by:

and to compare it with the classical first order Taylor’s formula given by (1). Now, standard result [12] regarding the P1−Lagrange interpolation error claims that for any function f which belongs to C2[a,b], we have:

This result is usually derived by considering the suitable function g(t) defined [a,b] by:

and (34) simply follows. However, to appreciate the difference between the classical Taylor’s formula and the new one in (31), let us introduce m2 and M2 such that:

Then, we will now reformulate estimate (34) by using the classical Taylor formula (1). This the purpose of the following lemma:

Let f be a function C2([a,b]) satisfying (37), then we have the following interpolation error estimate:

Let us now derive the corresponding result when one uses the new first order Taylor-like formula (31) in the expression of the interpolation polynomial Π[a,b](f) defined by (33). This is the purpose of the following lemma:

Let f∈C2([a,b]), then we have the following interpolation error estimate:

where ϵx,2 satisfies (32) with obvious changes of notations. Namely, we have:

Then, by substituting f(a) and f(b) in the interpolation polynomial given by (33), we have:

Now, if we introduce the corrected interpolation polynomial Π∗[a,b](f) defined by:

which completes the proof of this lemma.

Let us now formulate a couple of consequences of Lemma 3.1 and Lemma 3.2:

We consider now, for any integrable function f defined on [a,b], the famous trapezoidal quadrature [12] whose formula is given by:

The reason why we consider (53) is motivated by the fact that this quadrature formula corresponds to approximate the function f by its Lagrange polynomial interpolation Π[a,b](f), of degree less than or equal to one, which is given by (33). Thus, in the literature on numerical integration, (see for example [12] and [4]), the following estimation is well known as the trapezoid inequality :