A new family of maximum scattered linear sets in PG(1,q^6) 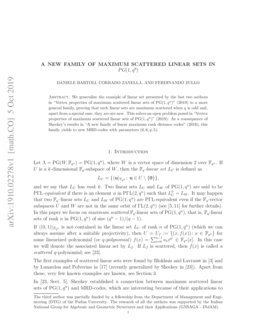 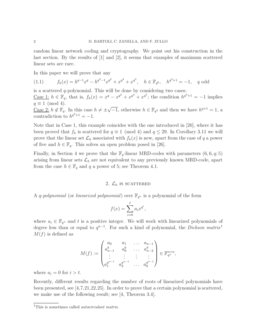 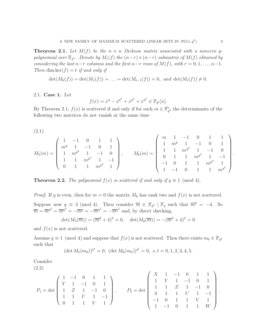 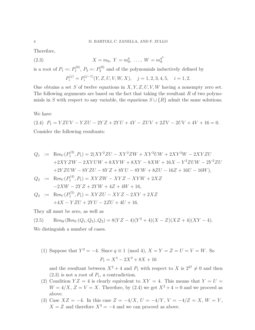 The aim of this paper is to survey on the known results on maximum scatt...
Olga Polverino, et al. ∙

We study loci and properties of a Parabola-inscribed family of Poncelet ...
Filipe Bellio, et al. ∙

is a vector space of dimension

2 over Fqn. If U is a k-dimensional Fq-subspace of W, then the Fq-linear set LU is defined as

If ⟨(0,1)⟩Fqn is not contained in the linear set LU of rank n of PG(1,qn) (which we can always assume after a suitable projectivity), then U=Uf:={(x,f(x)):x∈Fqn} for some linearized polynomial (or q-polynomial) f(x)=∑n−1i=0aixqi∈Fqn[x]. In this case we will denote the associated linear set by Lf. If Lf is scattered, then f(x) is called a scattered q-polynomial; see [23].

The first examples of scattered linear sets were found by Blokhuis and Lavrauw in [3] and by Lunardon and Polverino in [17] (recently generalized by Sheekey in [23]). Apart from these, very few known examples are known, see Section 3.

In this paper we will prove that any

Note that in Case 1, this example coincides with the one introduced in [26], where it has been proved that fh is scattered for q≡1(mod4) and q≤29. In Corollary 3.11 we will prove that the linear set Lh associated with fh(x) is new, apart from the case of q a power of five and h∈Fq. This solves an open problem posed in [26].

Finally, in Section 4 we prove that the Fq-linear MRD-codes with parameters (6,6,q;5) arising from linear sets Lh are not equivalent to any previously known MRD-code, apart from the case h∈Fq and q a power of 5; see Theorem 4.1.

where ai∈Fqn and t is a positive integer. We will work with linearized polynomials of degree less than or equal to qn−1. For such a kind of polynomial, the Dickson matrix111This is sometimes called autocirculant matrix. M(f) is defined as

Recently, different results regarding the number of roots of linearized polynomials have been presented, see [4, 7, 21, 22, 25]. In order to prove that a certain polynomial is scattered, we make use of the following result; see [4, Theorem 3.4].

By Theorem 2.1, f(x) is scattered if and only if for each m∈F∗q6 the determinants of the following two matrices do not vanish at the same time

The polynomial f(x) is scattered if and only if q≡1(mod4).

If q is even, then for m=0 the matrix M6 has rank two and f(x) is not scattered.

and f(x) is not scattered.

Assume q≡1(mod4) and suppose that f(x) is not scattered. Then there exists m0∈Fq6 such that

One obtains a set S of twelve equations in X,Y,Z,U,V,W having a nonempty zero set. The following arguments are based on the fact that taking the resultant R of two polynomials in S with respect to any variable, the equations S∪{R} admit the same solutions.

They all must be zero, as well as

We distinguish a number of cases.

This proves that such m0∈Fq6 does not exist and the assertion follows. ∎

We apply the same methods of Section 2.1. In the following preparatory lemmas (and in the rest of the paper) q is a power of an arbitrary prime p.

belongs to Fq6 then one of the following cases occurs:

The claim follows from Lemma 2.3. ∎

belongs to Fq6 then