In this note, we give a construction of Algebraic-Geometry codes on algebraic function field F/ F_q using places of F (not necessarily of degree one) and trace functions from various extensions of F_q. We compute a bound on the dimension of this code. We also determine a bound on the minimum distance of this code in terms of B_r(F) ( the number of places of degree r in F), 1 ≤ r < ∞. This code is a generalization of the geometric Goppa code, with no restriction on the length of the code except the support condition on divisors defining the code. We obtained few quasi-cyclic codes over F_p as examples of these codes. 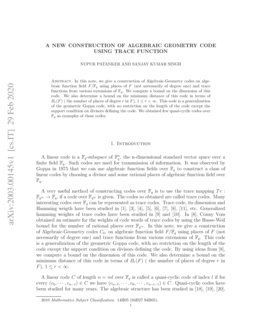 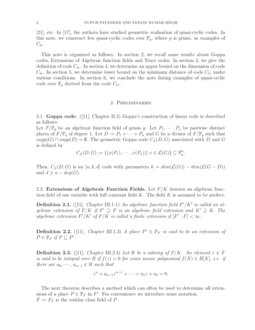 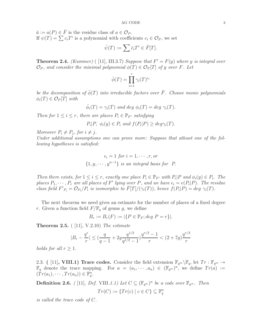 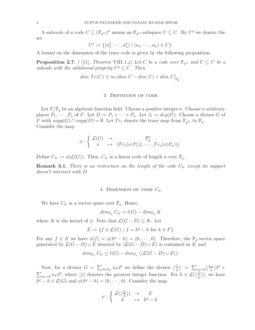 A linear code is a Fq-subspace of Fnq

, the n-dimensional standard vector space over a finite field

A very useful method of constructing codes over Fq is to use the trace mapping Tr:Fqm→Fq, if a code over Fqm is given. The codes so obtained are called trace codes. Many interesting codes over Fq can be represented as trace codes. Trace code, its dimension and Hamming weigth have been studied in [1], [3], [4], [5], [6], [7], [8], [11], etc. Generalized hamming weights of trace codes have been studied in [9] and [10]. In [8]

, Conny Voss obtained an estimate for the weights of code words of trace codes by using the Hasse-Weil bound for the number of rational places over

Fqm. In this note, we give a construction of Algebraic-Geometry codes Ctr on algebraic function field F/Fq using places of F (not necessarily of degree one) and trace functions from various extensions of Fq. This code is a generalization of the geometric Goppa code, with no restriction on the length of the code except the support condition on divisors defining the code. By using ideas from [8], we compute a bound on the dimension of this code. We also determine a bound on the minimum distance of this code in terms of Br(F) ( the number of places of degree r in F), 1≤r<∞.

([11], Chapter II.2) Goppa’s construction of linear code is described as follows: Let F/Fq be an algebraic function field of genus g. Let P1,⋯,Pn be pairwise distinct places of F/Fq of degree 1. Let D:=P1+⋯+Pn and G be a divisor of F/Fq such that supp(G)∩supp(D)=∅. The geometric Goppa code CL(D,G) associated with D and G is defined by

Let F/K denotes an algebraic function field of one variable with full constant field K. The field K is assumed to be perfect.

The next theorem describes a method which can often be used to determine all extensions of a place P∈PF in F′. For convenience we introduce some notation. ¯F:=FP is the residue class field of P. ¯a:=a(P)∈¯F is the residue class of a∈OP. If ψ(T)=∑ciTi is a polynomial with coefficients ci∈OP, we set

be the decomposition of ¯ϕ(T) into irreducible factors over ¯F. Choose monic polynomials ϕi(T)∈OP[T] with

Then for 1≤i≤r, there are places Pi∈PF′ satisfying

Moreover Pi≠Pj, for i≠j. Under additional assumptions one can prove more: Suppose that atleast one of the following hypotheses is satisfied:

The next theorem we need gives an estimate for the number of places of a fixed degree r. Given a function field F/Fq of genus g, we define

is called the trace code of C.

A subcode of a code C⊆(Fqm)n means an Fqm-subspace U⊆C. By Uq we denote the set

A bound on the dimension of the trace code is given by the following proposition.

( [11], Theorem VIII.1.4) Let C be a code over Fqm and U⊆C be a subcode with the additional property Uq⊆C. Then

There is no restriction on the length of the code Ctr except its support doesn’t intersect with D.

We have Ctr is a vector space over Fq. Hence,

where K is the kernel of ϕ. Note that L(G−D)⊆K. Let

From the above discussion, we have the following result regarding the dimension of C,

In this section we apply the techniques of [11], VIII.2 to compute bound on the minimum distance of Ctr. Suppose q=pm where m>0. We first assume that for all 1≤i,j≤n, βi is coprime to p and pβi>βj i.e degrees of Pi are not p times multiples of each other.

Given L(G), there exists a unique effective divisor A of smallest degree such that (f)∞≤A for all 0≠f∈L(G). One can describe A as follows: choose a basis {f1,⋯,fk} of L(G) then

for all P∈PF. We associate with the divisor A a second divisor A0 defined by

Assume that L(G) is non-degenerate.

Fq is constant field of Ef.

So, by Galois correspondence, there exists a field extension L′ of Fq such that [L′:Fq]=p. Thus, by Artin-Scherier extension, L′=Fq(α) where αp−α=γ∈Fq. Since, α∉F⇒[F(α):F]=p. By Elementary Abelian p-Extension, F(α)=F(yμ) where ypμ−yμ=μf. ⇒ yμ and α are two generators of Artin extension. So, they are related as yμ=βα+(bp−b) for β∈F∗p and b∈F. This implies, μf=βγ+(hp−h). This is a contradiction as f is assumed to be non-degenerate. ∎

The support of D consists of two disjoint subsets {P1,⋯,Pn}=N∪Z where

Hilbert’s Theorem 90 states that for γ∈Fqβ,

We would like to determine how the places Pi decompose in the extension Ef/Fq.

Let Pi∈N and γi:=f(Pi)∈Fqβ. The Artin-Scherier polynomial Yq−Y−γi has no root in Fqβ. Each irreducible factor of Yq−Y−γi in Fqβ has degree p. So, by Kummer’s theorem there are no places of degree β in Ef over Pi in N. Next we consider a place Pi∈Z. Then f(Pi) can be written as f(Pi)=:γi=βqi−βi∈Fqβ, hence the polynomial Yq−Y−γi factors over Fqβ into q distinct places of Ef, all of degree β. The above considerations imply that

If L(G)≠{0} and L(G)≠Fq, then the minimum distance d of Ctr is bounded from below by

If L(G)≠0 and L(G)≠Fq, then the minimum distance d of Ctr is bounded from below by

The above considerations imply that

Applying Theorem 2.5 for Bti,j we get,

If L(G)≠0 and L(G)≠Fq, then the minimum distance d of Ctr is bounded from below by

For 1≤i≤n, if βi=deg Pi=1, then we get the code Ctr is the trace code of geometric goppa code.

6.2. Some examples of quasi-cyclic codes over Fp

We let q=pr where p is prime. For a positive integer d it is well known that the number of monic irreducible polynomials of degree d over Fq, denoted by N(d,q), is given by

The trace of a polynomial f(x) of degree d over Fq is the coefficient of xd−1 in f.

For γ∈Fq, let Nγ(d,q) denotes the number of monic irreducible polynomials over Fq of degree d and trace γ. Carlitz’s formula [12] for Nγ(d,q) when γ≠0 is

Choose α∈Fp such that dα≡1 mod p or in other words Trd(α)=1 (such a α always exist since (d,p)=1). Let A denotes the set of all monic irreducible polynomials of degree d over Fp. We know that automorphism group of rational function field Aut(Fp(x)/Fp)=PGL(2,p) is the projective linear group over Fp i.e any ϕ∈Aut(Fp(x)/Fp) is of the form

Since for any f(x)∈A i.e for monic irreducible polynomial f(x)∈Fp[x] of degree d, we have f(x+α) is monic and irreducible of degree d i.e f(x+α)∈A and conversely. Order the elements of A as

The code Ctr as in equation (6.2) is quasi-cyclic code of length pm and index m.