A new combination approach based on improved evidence distance

Dempster-Shafer evidence theory is a powerful tool in information fusion. When the evidence are highly conflicting, the counter-intuitive results will be presented. To adress this open issue, a new method based on evidence distance of Jousselme and Hausdorff distance is proposed. Weight of each evidence can be computed, preprocess the original evidence to generate a new evidence. The Dempster's combination rule is used to combine the new evidence. Comparing with the existing methods, the new proposed method is efficient. 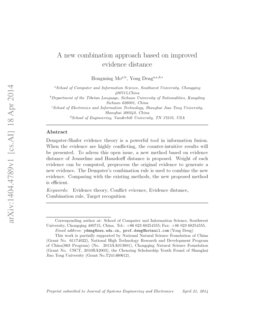 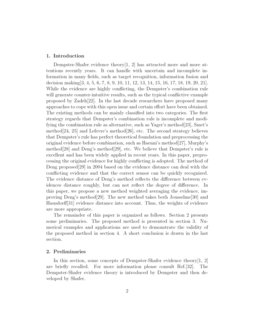 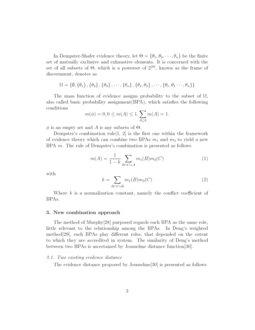 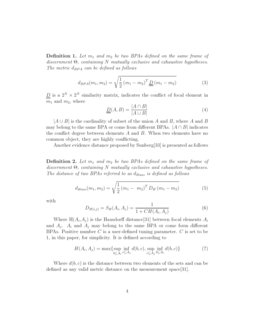 . In the last decade researchers have proposed many approaches to cope with this open issue and certain effort have been obtained. The existing methods can be mainly classified into two categories. The first strategy regards that Dempster’s combination rule is incomplete and modifying the combination rule as alternative, such as Yager’s method

yager1987dempster , Smet’s methodsmets1994transferable ; smets1990combination and Lefevre’s methodlefevre2002belief , etc. The second strategy believes that Dempster’s rule has perfect theoretical foundation and preprocessing the original evidence before combination, such as Haenni’s methodhaenni2002alternatives , Murphy’s methodmurphy2000combining and Deng’s methoddeng2004efficient , etc. We believe that Dempster’s rule is excellent and has been widely applied in recent years. In this paper, preprocessing the original evidence for highly conflicting is adopted. The method of Deng proposeddeng2004efficient in 2004 based on the evidence distance can deal with the conflicting evidence and that the correct sensor can be quickly recognized. The evidence distance of Deng’s method reflects the difference between evidences distance roughly, but can not reflect the degree of difference. In this paper, we propose a new method weighted averaging the evidence, improving Deng’s methoddeng2004efficient . The new method takes both Jousselmejousselme2001new and Hausdorffhausdorff1957set evidence distance into account. Thus, the weights of evidence are more appropriate.

In Dempster-Shafer evidence theory, let Θ={θ1,θ2,⋯,θn} be the finite set of mutually exclusive and exhaustive elements. It is concerned with the set of all subsets of Θ, which is a powerset of 2|Θ|, known as the frame of discernment, denotes as

The mass function of evidence assigns probability to the subset of

ϕ is an empty set and A is any subsets of Θ.

Where k is a normalization constant, namely the conflict coefficient of BPAs.

The method of Murphymurphy2000combining purposed regards each BPA as the same role, little relevant to the relationship among the BPAs. In Deng’s weighted methoddeng2004efficient , each BPAs play different roles, that depended on the extent to which they are accredited in system. The similarity of Deng’s method between two BPAs is ascertained by Jousselme distance functionjousselme2001new .

The evidence distance proposed by Jousselmejousselme2001new is presented as follows

Let m1 and m2 be two BPAs defined on the same frame of discernment Θ, containing N mutually exclusive and exhaustive hypotheses. The metric dBPA can be defined as follows

D–––– is a 2N×2N similarity matrix, indicates the conflict of focal element in m1 and m2, where

|A∪B| is the cardinality of subset of the union A and B, where A and B may belong to the same BPA or come from different BPAs. |A∩B| indicates the conflict degree between elements A and B. When two elements have no common object, they are highly conflicting.

Another evidence distance proposed by Sunbergsunberg2013belief is presented as follows

Let m1 and m2 be two BPAs defined on the same frame of discernment Θ, containing N mutually exclusive and exhaustive hypotheses. The distance of two BPAs referred to as dHaus is defined as follows

Where H(Ai,Aj) is the Hausdorff distancehausdorff1957set between focal elements Ai and Aj. Ai and Aj may belong to the same BPA or come form different BPAs. Positive number C is a user-defined tuning parameter. C is set to be 1, in this paper, for simplicity. It is defined according to

Where d(b,c) is the distance between two elements of the sets and can be defined as any valid metric distance on the measurement spacehausdorff1957set .

While the elements are real numbers, the Hausdorff distance may be simplify ashausdorff1957set ; sunberg2013belief

The below example is used to illustrate the difference between Jousselme distancejousselme2001new and Hausdorff distancehausdorff1957set .

There are five orderable mutually exclusive and exhaustive hypotheses elements: 1, 2, 3, 4 and 5 on the same frame of discernment Θ.

By (4), the Jousselme distance matrix D–––– between each elements in a BPA can be obtained as follows

In this subsection, we purpose an improved combination approach based on Deng’s methoddeng2004efficient . The new method takes advantage of Huasdorff distancehausdorff1957set to update Jousselme distancejousselme2001new .

Let m1 and m2 be two BPAs defined on the same frame of discernment Θ, containing N mutually exclusive and exhaustive hypotheses. The distance between m1 and m2 can be defined as

Given there are n BPAs in the system, we can calculate the distance between each two BPAs. Thus, the distance matrix is presented as follows

Let Simi(mi,mj) be the similarity value between BPA mi and mj, thus the Simi(mi,mj) can be defined as

From (13) and (14), we can see that the support degree Supp(mi) is the sum of similarity between each BPAs, except itself. The larger the value of Supp(mi) is, the more important the evidence will be.

To normalize Supp(mi), the W(mi) of BPA mi can be obtained as follows

W(mi) indicates the important and credible degree of BPA mi among all BPAs in the system. It can be regard as the weight of BPA mi. After obtained the weight of each BPAs, we take advantage of Dempster’s combination ruledempster1967upper ; shafer1976mathematical to yield a new BPA.

The below example is used to demonstrate the detail processes of the new proposed method.

Given there are four BPAs m1, m2, m3 and m4 on the same frame of discernment Θ:

Therefore, the new BPA mNew before combination can be obtained as follows

There are four BPAs in this example, we apply Dempster’s combination rule to combine the new BPA mNew three times, the results are presented as follows

We utilize the below example to illustrate the effectiveness of the new proposed method.

There are five mass functions on the same frame of discernment, the five BPAs are presented as followsdeng2004efficient

The results of different methods to combine the five BPAs are presented in Table.1. From Table.1, we can see that Dempster’s combination ruledempster1967upper ; shafer1976mathematical can not handel with highly conflicting evidence. Once an element is negatived by any BPAs, no matter how strongly it is supported by other BPAs, its probability will always remain zero.

Murphy’s methodmurphy2000combining regards each evidence plays the same role in the system, considered little relations among evidences. Dengdeng2004efficient improved Murphy’s work and took advantage of an evidence distance as the weight of each evidence. The novel proposed method based on Deng’s method, but utilizes Hausdorff distance to update the distance matrix. Fig.1 indicates that the convergence speed of proposed method is slower than Deng’s method but faster than Murphy’s method, owing to the additional update distance because some sensors may be orderable.

Dempster-Shafer evidence theory is a powerful tool to deal with uncertain and imprecise information in widely fields. However the evidence collected may be multifarious, some of them may be highly conflicting, owing to various noise factors, subjective or objective. The original Dempster combination rule can do nothing for these highly conflicting evidence. Modified methods of Dempster’s combination rule are briefly introduced, and all of them have some drawbacks. The new proposed method inherits all the advantages of Deng’s method. It applies Hausdorff distance to update the Jousselme distance and takes more distance information into account. Numerical examples demonstrate that the new proposed method can discern the correct target, effectively.

Hongming Mo was born in 1983. He received the B.S.degree from Chongqing Normal University in 2006. He is now an assistant researcher in Sichuan University of Nationalities. His research interests include uncertain information modeling and processing.

Yong Deng was born in 1975. He received the Ph.D.degree from Shanghai Jiaotong University in 2003. He is now a professor in Southwest University. His research interests include uncertain information modeling and processing.