A multi-user fog radio access network (F-RAN) is designed for supporting content-centric services. The requested contents are partitioned into sub-contents, which are then 'beam- formed' by the remote radio heads (RRHs) for transmission to the users. Since a large number of beamformers must be designed, this poses a computational challenge. We tackle this challenge by proposing a new class of regularized zero forcing beamforming (RZFB) for directly mitigating the inter-content interferences, while the 'intra-content interference' is mitigated by successive interference cancellation at the user end. Thus each beamformer is decided by a single real variable (for proper Gaus- sian signaling) or by a pair of complex variables (for improper Gaussian signaling). Hence the total number of decision variables is substantially reduced to facilitate tractable computation. To address the problem of energy efficiency optimization subject to multiple constraints, such as individual user-rate requirement and the fronthauling constraint of the links between the RRHs and the centralized baseband signal processing unit, as well as the total transmit power budget, we develop low-complexity path- following algorithms. Finally, we actualize their performance by simulations. 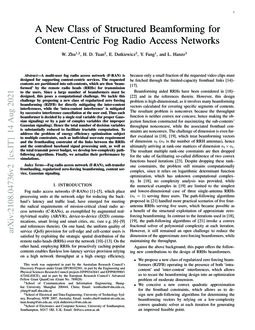 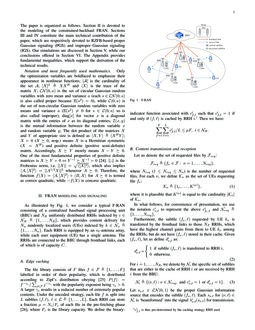 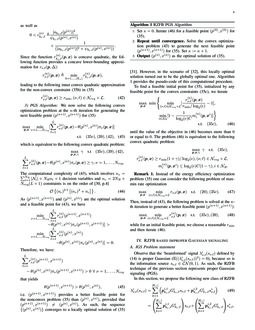 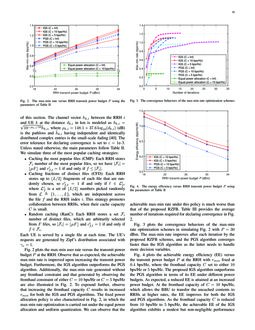 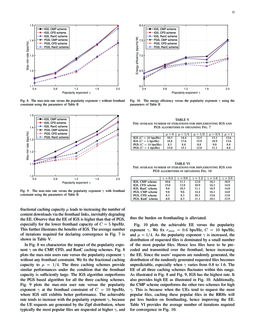 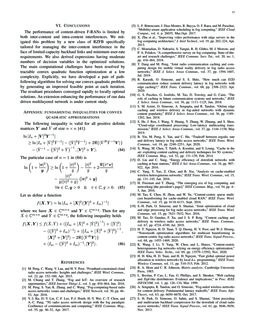 In this paper, we investigate the downlink transmission for cache-enable...
Shiwen He, et al. ∙

Broadcasting and multicasting services in LTE networks are shaping up to...
Claudio Casetti, et al. ∙

Fog radio access networks (F-RANs) [26, 6, 27, 14, 3], which place processing units at the network edge for reducing the backhaul’s latency and traffic load, have emerged for meeting the radical requirements of mission-critical cloud radio access networks (C-RANs), as exemplified by augmented reality/virtual reality (AR/VR), device-to-device (D2D) communications, smart living and smart cities, etc. (see e.g. [37, 17, 8, 12] and references therein). On one hand, the uniform quality of service (QoS) provision for cell-edge and cell-center users is satisfied by exploiting the strategic spatial distribution of the remote radio heads (RRHs) over the network [24, 2, 10, 39]. On the other hand, employing RRHs for proactively caching popular contents enables flawless low-latency service provision relying on a high network throughput at a high energy efficiency, because only a small fraction of the requested video clips must be fetched through the limited-capacity fronthaul links [36, 15, 38, 9].

and in the references therein. However, this design problem is high-dimensional, as it involves many beamforming vectors calculated for covering specific segments of contents. The resultant problem is nonconvex because the throughput function is neither convex nor concave, hence making the objection function constructed for maximizing the sub-contents’ throughput nonconcave, while the associated fronthaul constraints are nonconvex. The challenge of dimension is even further escalated in

[31, 23], which treat beamforming vectors of dimension nt (nt is the number of RRH antennas), hence ultimately arriving at rank-one matrices of dimension nt×nt. The resultant multiple rank-one constraints are then dropped for the sake of facilitating so-called difference of two convex functions based iterations [13]. Despite dropping these rank-one constraints, the problem still remains computationally complex, since it relies on logarithmic determinant function optimization, which has unknown computational complexity. In [31], no complexity analysis was provided, while the numerical examples in [23] are limited to the simplest and lowest-dimensional case of three single-antenna RRHs (nt=1) serving three users. The path-following algorithms proposed in [20] handled more practical scenarios of five four-antenna RRHs serving five users, which became possible as a benefit of the structural exploitation of approximate zero-forcing beamforming. In contrast to the iterations used in [31, 23], the path-following algorithms of [20] invoke a convex fractional solver of polynomial complexity at each iteration. However, it still remained an open challenge to reduce the dimension of the approximate zero forcing beamformers, while maintaining the throughput.

Against the above background, this paper offers the following new contributions to the design of RRHs beamformers.

The paper is organized as follows. Section II is devoted to the modeling of the constrained-backhaul FRAN. Sections III and IV constitute the main technical contribution of the paper, which are respectively devoted to RZFB-based proper Gaussian signaling (PGS) and improper Gaussian signaling (IGS). Our simulations are discussed in Section V, while our conclusions offered in Section VI. The Appendix provides fundamental inequalities, which support the derivation of the technical results.

Notation and most frequently used mathematics.   Only the optimization variables are boldfaced to emphasize their appearance in nonlinear functions; |A| is the cardinality of the set A; [X]2≜XXH and ⟨X⟩ is the trace of the matrix X; CN(0,a)

a (each s∈CN(0,a) is also called proper because E(s2)=0), while C(0,a) is the set of non-circular Gaussian random variables with zero means and variance a (E(s2)≠0 for s∈C(0,a) so is also called improper); diag[x] for vector x is a diagonal matrix with the entries of x as its diagonal entries; I(x,y) is the mutual information between the random variable x and random variable y; The dot product of the matrices X and Y of appropriate size is defined as ⟨X,Y⟩≜⟨XHY⟩; X≻0 (X⪰0, resp.) means X is a Hermitian symmetric (X=XH) and positive definite (positive semi-definite) matrix. Accordingly, X⪰Y merely means X−Y⪰0. One of the most fundamental properties of positive definite matrices is X⪰Y≻0⇔Y−1⪰X−1≻0 [11]. ||.|| is the Frobenius norm, i.e. ||X||=√⟨[X]2⟩, which also implies ⟨A,[X]2⟩=||A1/2X||2 whenever A⪰0. Therefore, the function f(X)=⟨A,[X]2⟩+⟨B,X⟩ for A⪰0 is termed as convex quadratic, while −f(X) is concave quadratic.

As illustrated by Fig. 1, we consider a typical F-RAN consisting of a centralized baseband signal processing unit (BBU) and NRuniformly distributed RRHs indexed by i∈NR≜{1,…,NR}, which provides content delivery for Nu randomly localized users (UEs) indexed by k∈Nu≜{1,…,Nu}. Each RRH is equipped by an nt-antenna array, while each user equipment (UE) has a single antenna. The RRHs are connected to the BBU through fronthaul links, each of which is of capacity C.

The file library consists of F files f∈F≜{1,…,F} labelled in order of their popularity, which is distributed according to Zipf’s distribution obeying [5] P(f)=f−γz/∑j∈Fj−γz with the popularity exponent being γz>0. A larger γz results in a reduced number of extremely popular contents. Under the uncoded strategy, each file f is split into L subfiles (f,ℓ), ℓ∈L≜{1,…,L}. Each RRH can store a fraction μ=Nc/Fc of each file in the pre-fetching phase [29], where Fc is the library capacity. We define the binary-indicator function associated with cif,ℓ such that cif,ℓ=1 if and only if (f,ℓ) is cached by RRH i.111cif,ℓ is thus pre-determined by the caching strategy RRH used Then we have:

Let us denote the set of requested files by Freq:

where Nreq (1≤Nreq≤Nu) is the number of requested files. For each ν, we define Kν as the set of UEs requesting file fν:

In what follows, for convenience of presentation, we use the notation ciν,ℓ to represent the above cifν,ℓ and Nreq≜{1,…,Nreq}.

Furthermore, the subfile (fν,ℓ) requested by UE kν is transferred by the fronthaul links to those NF RRHs, which have the highest channel gains from them to UE kν among the RRHs, but do not have (fν,ℓ) stored in their cache. Given (fν,ℓ), let us define diν,ℓ as:

For i=1,…,NR, we denote by Ni the specific set of subfiles that are either in the cache of RRH i or are received by RRH i from the BBU:

Let Ξi≜Ni∖{(ν,ℓ):ciν,ℓ=1}. Under the soft-transfer fronthauling (STF) regime of [22], the BBU transfers the following quantization-contaminated version of the ‘beamformed’ subfiles to RRH i:

with the independent quantization noise given by υi∈C(0,Δ2(~xi)+ϵInt) and

It is plausible that a finer quantization results in a reduced error covariance Δ(xi), hence leading to a higher throughput, but the soft-transfer of the quantized signals is limited by the capacity of STF according to (6). As analysed in detail in [20], SFT is much more efficient than hard-transfer fronthauling (HFT) in the face of limited fronthauling capacity.

Furthermore, the signal transmitted by RRH i is

which contains the quantization noise υi. This noise cannot be completely eliminated due to the limited fronthaul-rate constraint (6). The signal received by UE kν is

where hkν,i∈Cnt is the channel spanning from RRH i to UE kν, and zkν∈C is the background noise of covariance σ.

To assist the reader, Table I provides a summary of the key notations at a glance.

It follows from (8) that the interference of λiν,ℓ(sν,ℓ) to UE kν′ (ν′≠ν) is given by hHkν′,iλiν,ℓ(sν,ℓ). Thus, for nν≜∑ν′∈Nreq∖{ν}|Kν′|, we define the matrix of interfering channels by

and then the matrix of signal plus interfering channels as

associated with222P is the power budget

we propose the following class of RZFB

Let e1∈Rnν+1 having all-zero entries except for the first entry, which is 1. Then we have

implying that the power of λiν,ℓ(sν,ℓ) can be still amplified, while its interference inflicted upon UE kν′ (ν′≠ν) is approximately forced to zero. When the rank of ~Φikν,ℓ is (nν+1), which only occurs for nt>nν+1, the perfect zero-interference condition of λiν,ℓ(sν,ℓ) is achieved.

It should be noted that (14) represents a brand new class of RZFB specifically tailored for mitigating the inter-content interference only and as such it has quite a different structure compared to the traditional RZFB (see e.g. [21]), which aims for suppressing the multi-user interference.

Under the RZFB of (13), the signal ξi defined in (4) and transferred from the BBU to RRH i through the limited-rate backhaul link is reformulated as:

Then, the mutual information (MI) in the right-hand side (RHS) of (6) may be expressed as:

Then the fronthaul-rate constraint (6) becomes:

Observe that the unit in (18) is nat, while the unit of C is bit, so the factor log2(e) in (20) converts its right-hand side (RHS) to nats for consistency with its left-hand side (LHS).

The transmit signal at RRH i is specialized to

For each ν∈Nreq let ιν be the set of RRHs that do not have the entire file ν in their cache, i.e.

The power consumption of transmitting the signal carrying fν from RRH i is expressed as:

for x≜{xi,i=1,…,NR}. The total power dissipated by delivering fν is given by the following convex quadratic function

where Pnon is the total ‘non-transmission’ power dissipation at the RRHs formulated as NRntPa, where the antenna circuit power is Pa.

for detecting sν,ℓ by considering

in (III-A) as the signal of interest, and

as the interference-plus-noise term. As such, the throughput of sfν,ℓ at user kν is formulated as

which is a convex quadratic function.

The throughput of sν,ℓ after SIC becomes:

where P is the maximum power budget of each RRH, and rmin is the minimum rate required for guaranteeing the delivery of all files requested within a certain delivery deadline [1]. As such (35b

) constitutes the rate constraint to ensure a high-probability successful delivery according to Shannonian information theory.

Note that this problem is non-convex because the objective function (OF) in (35a) is not only non-smooth but also non-concave, while both the SFT constraint (20) and the rate-constraint (35b) are non-convex. We now develop a path-following algorithm, which iterates for finding ever better feasible points for (35) with the aid of convex solvers. To this end, we have to derive (i) an inner convex approximation for the SFT constraint (20) and the rate-constraint (35b); and (ii) a lower-bounding concave approximation for the OF in (35a).

Let (p(κ),x(κ)) be the specific feasible point for (35) that is found by the κth iteration.

Using the inequality (86) in the appendix yields

Iii-B2 Inner convex quadratic approximation for the rate-constraint (35b)

Since the function r(κ)kν,ℓ(p,x) is concave quadratic, the following function provides a concave lower-bounding approximation for rν,ℓ(p,Δ):

We now solve the following convex optimization problem at the κ-th iteration for generating the next feasible point (p(κ+1),x(κ+1)) for (35)

which is equivalent to the following convex quadratic problem: