We study the performance of a new block preconditioner for a class of 3×3 block saddle point problems which arise from finite element methods for solving time-dependent Maxwell equations and some other practical problems. We also estimate the lower and upper bounds of eigenvalues of the preconditioned matrix. Finally, we examine our new preconditioner to accelerate the convergence speed of the GMRES method which shows the effectiveness of the preconditioner. 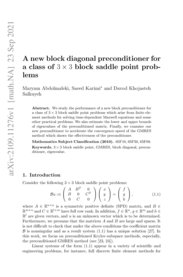 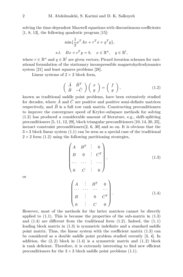 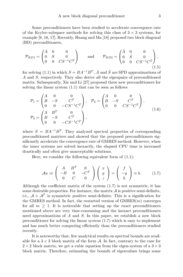 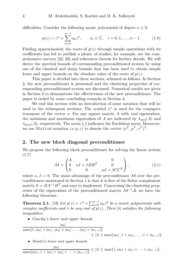 An iterative generalized Golub-Kahan algorithm for problems in structural mechanics

On fixed-point, Krylov, and 2× 2 block preconditioners for nonsymmetric problems

On the preconditioning of three-by-three block saddle point problems

We establish a new iterative method for solving a class of large and spa...
Hamed Aslani, et al. ∙

are given vectors, and

u is an unknown vector which is to be determined. Furthermore, we presume that the matrices A and B are large and sparse. It is not difficult to check that under the above conditions the coefficient matrix B is nonsingular and as a result system (1.1) has a unique solution [27]. In this work, we focus on preconditioned Krylov-subspace methods, especially, the preconditioned GMRES method (see [23, 24]).

Linear systems of the form (1.1) appear in a variety of scientific and engineering problems, for instance, full discrete finite element methods for solving the time-dependent Maxwell equations with discontinuous coefficients [1, 8, 13], the following quadratic program [15]:

where r∈Rn and q∈Rl are given vectors, Picard iteration schemes for variational formulation of the stationary incompressible magnetohydrodynamics system [21] and least squares problems [28].

known as traditional saddle point problems, have been extensively studied for decades, where ~A and ~C are positive and positive semi-definite matrices respectively, and ~B is a full row rank matrix. Constructing preconditioners to improve the convergence speed of Krylov-subspace methods for solving (1.2) has produced a considerable amount of literature, e.g., shift-splitting preconditioners [5, 11, 12, 29], block triangular preconditioners [10, 14, 20, 25], inexact constraint preconditioners[2, 6, 30] and so on. It is obvious that the 3×3 block linear system (1.1) can be seen as a special case of the traditional 2×2 form (1.2) using the following partitioning strategies,

However, most of the methods for the latter matrices cannot be directly applied to (1.1). This is because the properties of the sub-matrix in (1.3) and (1.4) are different from the traditional form (1.2). Indeed, the (1,1) leading block matrix in (1.3) is symmetric indefinite and a standard saddle point matrix. Thus, the linear system with the coefficient matrix (1.3) can be considered as a double saddle point problem studied recently [3, 4]. In addition, the (2,2) block in (1.4) is a symmetric matrix and (1,2) block is rank deficient. Therefore, it is extremely interesting to find new efficient preconditioners for the 3×3 block saddle point problems (1.1).

Some preconditioners have been studied to accelerate convergence rate of the Krylov-subspace methods for solving this class of 3×3 systems, for example [9, 16, 17]. Recently, Huang and Ma [18] proposed two block diagonal (BD) preconditioners,

for solving (1.1) in which S=BA−1BT, ^A and ^S are SPD approximations of A and S, respectively. They also derive all the eigenpairs of preconditioned matrix. Subsequently, Xie and Li [27] proposed three new preconditioners for solving the linear system (1.1) that can be seen as follows

where S=BA−1BT. They analyzed spectral properties of corresponding preconditioned matrices and showed that the proposed preconditioners significantly accelerate the convergence rate of GMRES method. However, when the inner systems are solved inexactly, the elapsed CPU time is increased drastically and often give unacceptable solutions.

Here, we consider the following equivalent form of (1.1):

Although the coefficient matrix of the system (1.7) is not symmetric, it has some desirable properties. For instance, the matrix A is positive semi-definite, i.e., A+AT is symmetric positive semi-definite. This is a signification for the GMRES method. In fact, the restarted version of GMRES(m) converges for all m≥1. It is noticeable that setting up the exact preconditioners mentioned above are very time-consuming and the inexact preconditioners need approximations of A and S. In this paper, we establish a new block preconditioner for solving the linear system (1.7) which is easy to implement and has much better computing efficiently than the preconditioners studied recently.

It is noteworthy that, few analytical results on spectral bounds are available for a 3×3 block matrix of the form A. In fact, contrary to the case for 2×2 block matrix, we get a cubic equation from the eigen-system of a 3×3 block matrix. Therefore, estimating the bounds of eigenvalues brings some difficulties. Consider the following monic polynomial of degree n≥2:

Finding approximately the roots of p(z) through simple operations with its coefficients has led to publish a plenty of studies, for example, see the comprehensive surveys [22, 26] and references therein for further details. We will derive the spectral bounds of corresponding preconditioned system by using one of the classical and sharp bounds that has been used to obtain simple lower and upper bounds on the absolute value of the roots of p(z).

We end this section with an introduction of some notation that will be used in the subsequent sections. The symbol x∗ is used for the conjugate transpose of the vector x. For any square matrix A with real eigenvalues, the minimum and maximum eigenvalues of A are indicated by λmin(A) and λmax(A), respectively. The norm ∥.∥ indicates the Euclidean norm. Moreover, we use Matlab notation (x;y;z) to denote the vector (xT,yT,zT)T.

We propose the following block preconditioner for solving the linear system (1.7)

[19] Let p(z)=zn+∑n−1k=0akzk be a monic polynomials with complex coefficients and λ be any root of p(z). Then |λ| satisfies the following inequalities

It is noted that, Cauchy’s bounds are essentially the most sharpest ones in Theorem 2.1 and have been used for testing the sharpness of other new bounds. Hence, we will utilize these bounds to locate the eigenvalues of corresponding preconditioned matrix.

, and the corresponding eigenvectors are of the form

(xi;0;0), where {xi}n−mi=1 is a basis for the null space of B. Moreover, for the remaining eigenvalues we have the following statements:

respectively. This shows that λ=1 and the corresponding eigenvectors are of the form (x;0;0) with x∈null(B).

Substituting the preceding equalities into (2.2b), gives

By premultiplying the above equation by λ(λ−1) and y∗, we obtain the following cubic equation:

To obtain the clustering properties of the eigenvalues around the point (1,0) we set μ=λ−1. By substituting μ in (2.3) we get the following cubic equation

As we see in Theorem 2.2, the lower and upper bounds of some eigenvalues of the preconditioned matrix M−1A depend on the parameters α and β. Using (2.4) and the Schur decomposition of matrices A and αI+βCCT, and straightforward computations the following upper and lower bounds for p and q are obtained as

Hence, we conclude that

For the sake of the simplicity, let

Therefore, we have the following inequality

It is clear that matrices CCT and BBT are both SPD under our assumptions. Hence, we infer that η≠0. Therefore, we can set

Note that θκ<ηγ, and then it follows that κη(γ−θκη)>0. Therefore, the above inequality can be easily deduced.

Similar to the argument in the previous case we set

and finally conclude that

According to the above discussion we state the following theorem that gives conditions on α and β under which p+q>1 or p+q≤1.

We have the following cases:

In each iteration of a Krylov subspace method for solving the preconditioned system M−1Au=M−1b we need to compute a vector of the form (z1;z2;z3)=M−1(r1;r2;r3) where r1∈Rn, r2∈Rm and r3∈Rℓ. To do so, it is enough to solve the system M(z1;z2;z3)=(r1;r2;r3) for (z1;z2;z3). Since, M is a block diagonal matrix, solution of the system is reduced to the solution of three systems with the coefficient matrices A, αI+βBBT and αI+βCCT, which are all SPD. By summarizing the above notes we can state Algorithm 1.

Since the coefficient matrices of the subsystems in Algorithm 1 are SPD, they can be solved exactly using either the Cholesky factorization or inexactly using the conjugate gradient (CG) iteration method. It is noted that, the shift matrix αI in the steps 3 and 4 of Algorithm 1 increases the convergence speed of the CG method considerably.

In this section, we experimentally compare the effectiveness our proposed preconditioner with two preconditioners PBD2 and P2 defined, respectively, in Eqs. (1.5) and (1.6) for solving the saddle point linear system (1.7). All the numerical experiments were computed in double precision using some Matlab codes on a Laptop with Intel Core i7 CPU 2.9 GHz, 16GB RAM.

In the subsequent presented numerical results, the right-hand side vector b is set to b=Au∗, where u∗ is a vector of all ones. We use a null vector as an initial guess for the GMRES method and the iteration is stopped once the relative residual 2-norm satisfies

where u(k) is the kth computed approximate solution. The maximum number of iterations is set to be maxit=1000. To show the accuracy of the methods we report the values

with ⊗ being the Kroneker product symbol and h=1/(p+1) the discretization meshsize. Here, the total number of unknowns is 4p2 and m=l.

is a block-diagonal matrix,

is an identity matrix;

Similar to Example 1, the Matrix ^S is set to be ^S=Bdiag(A)−1BT. In addition, we choose the parameters α=10−1 and β=1. Numerical results for different values of p are listed in Table 3. As we observe, the numerical results illustrate that the preconditioner M considerably reduces the CPU time of the FGMRES method without preconditioning.

A new block diagonal preconditioner has been presented for a class of 3×3 block saddle point problems. This preconditioner is based on augmentation and performs well in practice. Also, it is easy to implement and has much better efficiency than the recently existing preconditioners. We have further estimated the lower and upper bounds of eigenvalues of the preconditioned matrix. We have examined the new preconditioner to accelerate the convergence speed of the FGMRES method as well as Full-GMRES. Our numerical tests illustrate that the proposed preconditioner is quite suitable and is superior to the other tested preconditioners in the literature.

The authors would like to thank the anonymous referees for their useful comments and suggestions.