A New Algorithmic Decision for Catergorical Syllogisms via Caroll's Diagrams

In this work, we give an algorithm by using Carroll diagrammatic method for deciding the syllogism is valid or not. 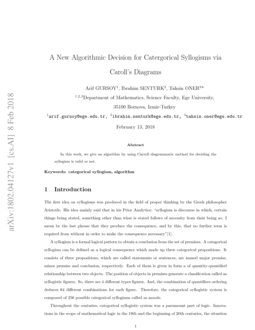 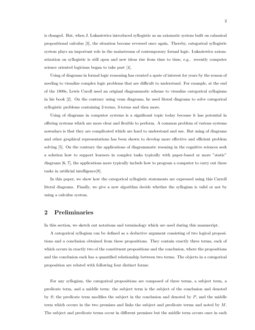 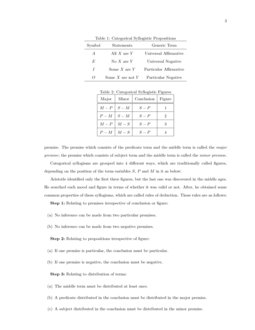 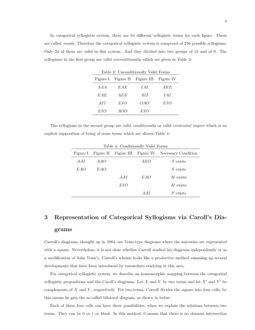 A New Algorithmic Decision for Categorical Syllogisms via Caroll's Diagrams

We introduce a procedure that solves the decision problem whether a give...
Immanuel Albrecht, et al. ∙

Estimating the Value of Computation in Flexible Information Refinement

We outline a method to estimate the value of computation for a flexible ...
Michael C. Horsch, et al. ∙

The first idea on syllogisms was produced in the field of proper thinking by the Greek philosopher Aristotle. His idea mainly said that in his Prior Analytics: “syllogism is discourse in which, certain things being stated, something other than what is stated follows of necessity from their being so. I mean by the last phrase that they produce the consequence, and by this, that no further term is required from without in order to make the consequence necessary”jon .

A syllogism is a formal logical pattern to obtain a conclusion from the set of premises. A categorical syllogism can be defined as a logical consequence which made up three categorical propositions. It consists of three propositions which are said to be statements or sentences called major premise, minor premise and conclusion, respectively. Each of them has a quantified relationship between two objects. The position of objects in premises generate a classification called as syllogistic figures. So, there are 4 different types figures. And, the combination of quantifiers ordering deduces 64 different combinations in each figure. Therefore, a categorical syllogistic system consists of 256 syllogistic moods, 15 of which are unconditionally and 9 of them are conditionally; in total 24 of them are valid. Those syllogisms in the conditional group are also said to be strengthened, or valid under existential import, which is an explicit assumption of existence of some S, M or P. Then we add a rule to SLCD: Some X is X when X exists and consequently, we obtain the formal system SLCD†.

Throughout the centuries, categorical syllogistic system was a paramount part of logic. Innovations in the scope of mathematical logic in the 19th and the beginning of 20th centuries, the situation is changed. However, when J. Łukasiewicz introduced syllogistic as an axiomatic system built on classical propositional calculus Lukasiewicz , the situation became reversed once again. Thereby, categorical syllogistic system plays an important role in the mainstream of contemporary formal logic. Furthermore, Łukasiewicz axiomatization on syllogisms is still open and new ideas rise from time to time. In recent years, the using of syllogisms is studied extensively and investigated under different treatments such as computer science Kumova ; Hartmann ; engineering Kulik ; jet

Using of diagrams in formal logic reasoning has created a spate of interest for years by the reason of needing to visualize complex logic problems that are difficult to understand. For example, at the end of the 1800s, Lewis Carroll used an original diagrammatic scheme to visualize categorical syllogisms in his book Lewis . On the contrary using venn diagrams, he used literal diagrams to solve categorical syllogistic problems containing 2-terms, 3-terms and so on. Moreover, using of diagrams in computer systems is a significant topic today because it has potential in offering systems which are more clear and flexible to perform. A common problem of various systems nowadays is that they are complicated which are hard to understand and use. So, we need to use diagrams or other graphical representations to develop more effective and efficient problem solving nakatsu . On the contrary the applications of diagrammatic resoning in the cognitive sciences seek a solution how to support learners in complex tasks typically with paper-based or more “static” diagrams Mayer1 ; Mayer2 , the applications more typically include how to program a computer to carry out these tasks in artificial intelligence Glaskow . Besides, there are also some related works with the using diagrams of syllogisms in different areas such as moktefi2013beyond ; castro2017re ; alternativetovennn ; manzano .

In this paper, we show how the categorical syllogistic statements are expressed using this Carroll literal diagrams. Then, we give a new algorithm deciding whether the syllogism and a strengthened syllogism are valid or not by the help of a calculus system SLCD and SLCD†, respectively.

In this section, we sketch out notations and terminology which are used during this manuscript.

Categorical syllogisms are grouped into 4 different ways, which are traditionally called figures, depending on the position of the term-variables S, P and M in Table 2.

Aristotle identified only the first three figures, but the last one was discovered in the middle ages. He searched each mood and figure in terms of whether it was valid or not. After, he obtained some common properties of these syllogisms, which are called rules of deduction. These rules are as follows:

Step 1: Relating to premises irrespective of conclusion or figure:

The syllogisms in the first group are valid unconditionally which are given in Table 3.

The syllogisms in the second group called strengthened syllogism are valid conditionally or valid existential import ,which is an explicit supposition of being of some terms, are shown in Table 4.

Carroll’s diagrams, thought up in 1884, are Venn-type diagrams where the universes are represented with a square. Nevertheless, it is not clear whether Carroll studied his diagrams independently or as a modification of John Venn’s. Carroll’s scheme looks like a productive method summing up several developments that have been introduced by researchers studying in this area.

For categorical syllogistic system, we describe an homomorphic mapping between the categorical syllogistic propositions and the Carroll’s diagrams. Let X and Y be two terms and let X′ and Y′ be complements of X and Y, respectively. For two-terms, Carroll divides the square into four cells, by this means he gets the so-called bilateral diagram, as shown in Table 5.

Each of these four cells can have three possibilities, when we explain the relations between two terms. They can be 0 or 1 or blank. In this method, 0 means that there is no element intersection cell of two elements, 1 means that it is not empty and blank cell means that we don’t have any idea about the content of the cell, it could be 0 or 1.

As above method, let X, Y, and M be three terms and X′, Y′, and M′ be complements of X, Y, and M, respectively. For examining all relations between three terms, he added one more square in the middle of bilateral diagram which is called the trilateral diagram, as in Figure 1.

Each cell in a trilateral diagram is marked with a 0, if there is no element and is marked with a I if it is not empty and another using of I, it could be on the line where the two cell is intersection, this means that at least one of these cells is not empty. So, I is different from 1. In addition to these, if any cell is blank, it has two possibilities, 0 or I.

This method can be used in accordance with the rules below Lewis :

First Rule: 0 and I are fixed up on trilateral diagrams.

We obtain the required conclusion of a syllogism by using of these rules. The effect of Carroll’s method of transfer, unknown to Venn, could not be underestimated. It only shows how to extract the conclusion from the premises of a syllogism moktefi2012history .

Now, we give the set theoretical representation of syllogistic arguments by means of bilateral diagrams. To build such a model, we draw from Carroll’s diagrammatic method. We give a definition of a map which corresponds each bilateral diagram to a set. Eventually, our main purpose is to construct a complete bridge between sets and categorical syllogisms such as Table 6.

rus Let pi be a possible bilateral diagram and ni be the value that the i-th cell possesses. The rvalj corresponds to the value of pi which is calculated by using the formula

where k is the number of all possible forms.

We obtain the set representations of all categorical propositions as follows:

We input the data on trilateral diagram as in Figure 2.

By using the elimination method, we obtain the relation between S and P as Table 15.

Let rvali and rvalj be the numbers corresponding to possible forms of bilateral diagrams which have a common term. Then we can get the relation between two other terms by using this method.

After these examples, we try to generalize them by a formula.

The syllogistic possible conclusion mapping, denoted ∗, is a mapping which gives us the deduction set of possible forms of major and minor premises sets.

Let rvali and rvalj correspond to the numbers of possible forms of major and minor premises, respectively. Then, rvali∗rvalj equals the value given by the intersection of row and column numbers corresponding to rvali and rvalj in Table 16.

Therefore, we scrutinise all possible cases between two terms and their conclusions.

Note that, Table 16 is used as Syllogistic_Mapping() subalgorithm in Section 4.

Universes of values sets of major premises, minor premises, and conclusions are denoted by RsetMaj, RsetMin and RsetCon, respectively.

The syllogistic mapping, denoted by , is a mapping which gives us the conclusion of the major and the minor premises as Table 17.

Let Rset(k)={rvalk1,…,rsetkn} and Rset(l)={rvall1,…,rvallt} two sets corresponding to the Major and the Minor premises. Then

senturkoner A syllogism is valid if and only if it is provable in SLCD.

For conditional valid forms, we need an addition rule which is “Some X are X”. We can use above Theorem by taking into consideration this rule.

Let SLCD be noted calculus system. If the rule “Some X are X when X exists” (i.e., ⊢IXX) is added to SLCD, then the calculus system SLCD is denoted by SLCD†.

senturkoner Let R(k) be the bilateral diagram presentation of the premise. The transposition of a premise is the symmetric positions with respect to the main diagonal. It is shown by Trans(R(k)).

senturkoner Let Rset(k)={rvalk1,…,rsetkn} and Rset(l)={rvall1,…,rvallt} be two sets to correspond to the Major and the Minor premises values sets and Rset(s)={rvals1,…,rsetsm} be set to correspond to the constant set values which means “Some S are S”, “Some M are M” and “Some P are P”. Then

is the conclusion of the premises Rset(k) and Rset(l) under the conditions S exists, M exists or P exists.

senturkoner A strengthened syllogism is valid if and only if it is provable in SLCD†.

4 An Algorithmic Decision for Categorical Syllogisms in SLCD

In this part of the manuscript, we give an algorithm to decide whether a categorical syllogism is valid or not in the calculus system SLCD or SLCD† at the first time in the literature. Global variables used to all functions are below: Conc[ ][ ]: two dimensional array, set of all possible bilateral diagrams Const_set: constant set for each condition S exists, M exists and P exists

∙ Subalgorithm MPSM: This algorithm determines the positions of the subject term, middle term and predicate term with respect to the figure parameter as input.

∙ Subalgorithm Decision: This algorithm determines major and minor sets for each prepositions (A, E, I and O) of major and minor premises by using Set_Interpretation() subalgorithm. We obtain premises conclusion via Syllogistic_Mapping() using major set and minor set values with respect to Table 16. Later, for the analysed figure the premises conclusion set is compared to all conclusion sets under the corresponding state. If these are equal to each other, then the algorithm prints “valid” output for the related syllogism.