Mixture regression provides a statistical model for teasing out latent heterogeneous relationships between response and independent variables. Solving mixture regression relying on EM algorithm is highly sensitive to outliers. To enable simultaneous outlier detection and robust parameter estimation, we proposed a fast and efficient robust mixture regression algorithm, considering Component-wise Adaptive Trimming (CAT). Compared with multiple existing algorithms, it grasps a good balance of computational efficiency and robustness, in different scenarios of simulated data, where unequal component proportions and variances, different levels of outlier contaminations and sample sizes, occur. The adaptive trimming ability of CAT makes it a highly potential tool for mining the latent relationships among variables in the big data era. CAT has been implemented in an R package 'RobMixReg' available in CRAN. 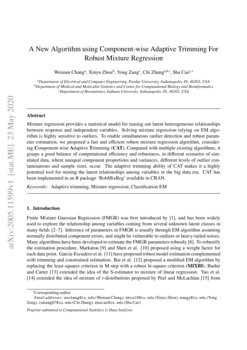 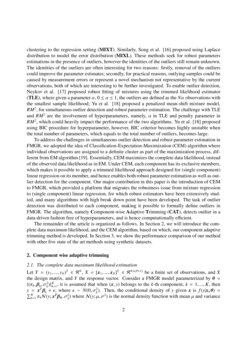 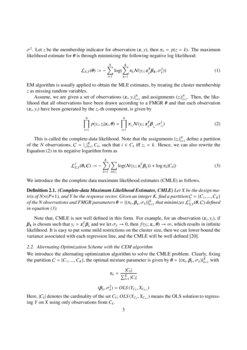 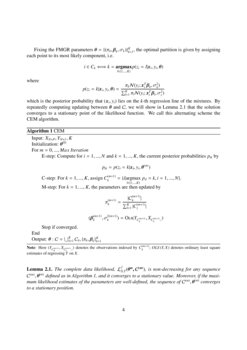 In this paper, we propose a Spatial Robust Mixture Regression model to i...
Wennan Chang, et al. ∙

Efficient and Robust Estimation of Linear Regression with Normal Errors

. Inference of parameters in FMGR is usually through EM algorithm assuming normally distributed component errors, and might be vulnerable to outliers or heavy-tailed noises. Many algorithms have been developed to estimate the FMGR parameters robustly

extended the idea of the S-estimator to mixture of linear regression. Yao et al.

yao2014robust extended the idea of mixture of t-distributions proposed by Peel and McLachlan peel2000robust from clustering to the regression setting (MIXT). Similarly, Song et al. song2014robust proposed using Laplace distribution to model the error distribution (MIXL). These methods seek for robust parameters estimations in the presence of outliers, however the identities of the outliers still remain unknown. The identities of the ourliers are often interesting for two reasons: firstly, removal of the outliers could improve the parameter estimates; secondly, for practical reasons, outlying samples could be caused by measurement errors or represent a novel mechanism not representative by the current observations, both of which are interesting to be further investigated. To enable outlier detection, Neykov et al. neykov2007robust proposed robust fitting of mixtures using the trimmed likelihood estimator (TLE), where given a parameter α, 0≤α≤1, the outliers are defined as the Nα observations with the smallest sample likelihood; Yu et al. yu2017new proposed a penalized mean-shift mixture model, RM2, for simultaneous outlier detection and robust parameter estimation. The challenge with TLE and RM2

are the involvement of hyperparameters, namely,

α in TLE and penalty parameter in RM2, which could heavily impact the performance of the two algorithms. Yu et al. yu2017new proposed using BIC procedure for hyperparameter, however, BIC criterior becomes highly unstable when the total number of parameters, which equals to the total number of outliers, becomes large.

To address the challenges in simultaneous outlier detection and robust parameter estimation in FMGR, we adopted the idea of Classification-Expectation-Maximization (CEM) algorithm where individual observations are assigned to a definite cluster as part of the maximization process, different from EM algorithm

celeux1992classification. Essentially, CEM maximizes the complete data likelihood, instead of the observed data likelihood as in EM. Under CEM, each component has its exclusive members, which makes it possible to apply a trimmed likelihood approach designed for (single component) linear regression on its member, and hence enables both robust parameter estimation as well as outlier detection for the component. Our major contribution in this paper is the introduction of CEM to FMGR, which provided a platform that migrates the robustness issue from mixture regression to (single component) linear regression, for which robust estimators have been extensively studied, and many algorithms with high break down point have been developed. The task of outlier detection was distributed to each component, making it possible to formally define outliers in FMGR. The algorithm, namely Component-wise Adaptive Trimming (CAT), detects outlier in a data-driven fashion free of hyperparameters, and is hence computationally efficient.

The remainder of the article is organized as follows. In Section 2, we will introduce the complete data maximum likelihood, and the CEM algorithm, based on which, our component adaptive trimming method is developed. In Section 3, we show the performance comparison of our method with other five state of the art methods using synthetic datasets.

the response vector. Consider a FMGR model parameterized by

θ={(πk,βk,σ2k)}Kk=1, it is assumed that when (x,y) belongs to the k-th component, k=1,...,K, then y=xTβk+ϵ, where ϵ∼N(0,σ2k). Then, the conditional density of y given x is f(y|x,θ)=∑Kk=1πkN(y;xTβk,σ2k) where N(y;μ,σ2) is the normal density function with mean μ and variance σ2. Let z be the membership indicator for observation (x,y), then πk=p(z=k). The maximum likelihood estimate for θ is through minimizing the following negative log likelihood:

EM algorithm is usually applied to obtain the MLE estimates, by treating the cluster membership z

Assume, we are given a set of observations (xi,yi)Ni=1 and assignments (zi)Ni=1. Then, the likelihood that all observations have been drawn according to a FMGR θ and that each observation (xi,yi) have been generated by the zi-th component, is given by

This is called the complete-data likelihood. Note that the assignments {zi}Ni=1 define a partition of the N observations, C=⋃Kk=1Ck, such that i∈Ck iff zi=k. Hence, we can also rewrite the Equation (2) in its negative logarithm form as

We introduce the the complete data maximum likelihood estimates (CMLE) as follows.

(Complete-data Maximum Likelihood Estimates, CMLE) Let X be the design matrix of N×(P+1), and Y be the response vector. Given an integer K, find a partition C={C1,...,CK} of the N observations and FMGR parameters θ={(πk,βk,σk)}Kk=1 that minimizes LfX,Y(θ,C) defined in equation (3).

Note that, CMLE is not well defined in this form. For example, for an observation (xi,yi), if βk is chosen such that yi=xTiβk and we let σk→0, then f(yi;xi,θ)→∞, which results in infinite likelihood. It is easy to put some mild restrictions on the cluster size, then we can lower bound the variance associated with each regression line, and the CMLE will be well defined blomer2016hard.

We introduce the alternating optimization algorithm to solve the CMLE problem. Clearly, fixing the partition C={C1,...,CK}, the optimal mixture parameter is given by θ={(πk,βk,σk)}Kk=1 with

Here, |Ck| denotes the cardinality of the set Ck; OLS(YCk,XCk,;) means the OLS solution to regressing Y on X using only observations from Ck.

Fixing the FMGR parameters θ={(πk,βk,σk)}Kk=1, the optimal partition is given by assigning each point to its most likely component, i.e.

which is the posterior probability that

(xi,yi) lies on the k-th regression line of the mixtures. By repeatedly computing updating between θ and C, we will show in Lemma 2.1 that the solution converges to a stationary point of the likelihood function. We call this alternating scheme the CEM algorithm.

We first show that the sequence LfX,Y(θm,C(m)) is non-decreasing. Since θ(m+1)k is maximizing ∏i∈C(m)kp(yi,zi=k|θ,xi), then

for all k′≠k, which implies

2.3 A new definition for outlier under CEM

In linear regression, outliers are understood as observations that deviate from the model assumptions, and obviously, samples with lower likelihood are more likely to be outliers. Powerful tools that simultaneously identifies and down weighs the outlying data points for linear regression has been developed. In robust linear regression, the outliers are either identified as a trimming ratio α of the total observations with the lowest likelihood, or they are identified in a completely data-driven manner, without the need of a pre-specified α pison2002small; leroy1987robust; rousseeuw1984least; rousseeuw1999fast.

The complete data likelihood approach based CEM algorithm disentangles the mixture distribution into exclusive clusters, within which, the robustness issue could be much easily handled give the tremendous amount of research conducted for robust linear regression. More importantly, we could introduce a more natural definition for outliers.

This new definition shifts the robustness issue from a mixture model to its K linear regression components, the latter of which has been well defined and studied. Here ηk(⋅) is a criterior for outlier-ness in linear regression. Naturally, to confer a robust parameter estimation for FMGR under CMLE, we could replace the least square criterion for parameter estimation in the M-step by a robust criterion; and further to enable simultaneous outlier detection, we could choose to use any trimmed likelihood approach with high break-down point.

Under Definition 2.2, detecting outliers of the FMGR model could be accomplished through detecting the component-wise outliers. And the fact that outlier detection in linear regression could be completely data-adaptive makes it possible for us to develop a data-driven algorithm for simultaneous outlier detection and robust parameter estimation in FMGR.

Our Component-wise Adaptive Trimming method, namely CAT, starts by initializing the posterior probability matrix, W=(pik)i=1,...,N;k=1,...,K, as in Algorithm 2. For k=1,...,K, we randomly sampling n0 samples to build a robust linear regression model, and the posterior probability of sample i for component k will be initialized as the density of the residual of sample i fitting the k-th robust regression line. For robust linear regression, we use the “ltsReg” function in the “robustbase” library in R pison2002small; leroy1987robust; rousseeuw1984least; rousseeuw1999fast, where the outliers were detected in a data-driven manner, in addition to robust parameter estimates.

With each initialized W, CAT then runs a robust CEM algorithm where the OLS estimates in the M-step was replaced by robust estimates using trimmed likelihood method. At the end of each iteration, an MLE estimate will be obtained on samples excluding the outliers detected from all the K components. The MLE estimates were conducted using function “flexmix” from the “flexmix” R package leisch2004flexmix. When the set of outliers do not change between two iterations (or reaching a pre-specificed number of iterations), the outlier and parameter estimates will then be finalized for this random start.

CAT undergoes multiple random starts to stabilize the results, and select the results from the start whose obtained outliers are the closest to the average frequency of outliers across all the random starts. The complete CAT algorithm was illustrated in Algorithm 3.

We evaluate the performance of CAT on synthetic datasets, and compare it with several existing method, including MLE, TLE, MIXT, MIXL and MIXBI. They stand for the MLE approach leisch2004flexmix, the trimmed likelihood approach neykov2007robust, the mixture t yao2014robust, mixture Laplaciansong2014robust, and mixture bisquare bai2012robust approaches.

where θ=(π1,β1,σ1,...,πK,βK,σK). Here, for each observation, a mean-shift parameter, γij, is added to its mean structure in each mixture component. We consider scenarios in which the observations are drawn from mixture regression models with different P, K, σ, N, and contaminated with different levels of additive outliers.

Example 1: For each i=1,...,N, yi is independently generated with

is a component indicator generated from a Bernoulli distribution with

Example 2: For each i=1,...,n, yi is independently generated with

For scenario in examples 1 and 2, we simulate data for sample sizes 200 and 400. The bias and MSE of parameter estimation over 100 repetitions under each scenario was examined for each competing method, which includes the linear regression coefficients and mixing proportion of all the components. The label switching issue celeux2000computational; stephens2000dealing; yao2009bayesian creates some trouble on how to align the parameters of one component from predicted model to that of the true model. Different component orders in the predicted and true model might give totally different results and there are no widely accepted methods to adjust for that. In our simulation study, we simply choose to order the components in the estimated parameter matrix by minimizing the Euclidian distance to the true parameter matrix.

We proposed solving FMGR using the CEM algorithm, based on which, the outliers are more naturally defined, and robustness issue better and more conveniently handled. The CEM algorithm represents a variant of the EM algorithm by maximizing the complete data likelihood. It enables a more natural definition of outliers for FMGR, and further the simultaneous detection of outliers and robust estimation of parameters. Most importantly, the adaptive trimming in FMGR boils down into that of the simple linear regression, for which many powerful tools have been developed. In summary, CAT is an automatic algorithm of high potential in mining the heterogeneous relations among variables in the data booming era.