Group testing is a well-known search problem that consists in detecting of s defective members of a set of t samples by carrying out tests on properly chosen subsets of samples. In classical group testing the goal is to find all defective elements by using the minimal possible number of tests in the worst case. In this work, two-stage group testing is considered. Using the hypergraph approach we design a new search algorithm, which allows improving the known results for fixed s and t→∞. For the case s=2 this algorithm achieves information-theoretic lower bound 2_2t(1+o(1)) on the number of tests. Also, the problem of finding m out of s defectives is considered. 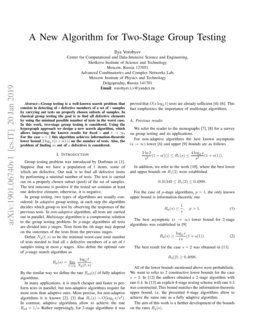 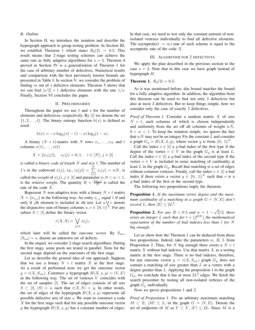 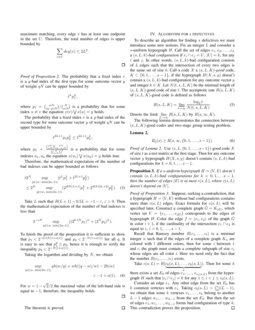 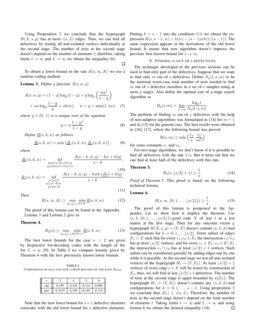 On the binary adder channel with complete feedback, with an application to quantitative group testing

We determine the exact value of the optimal symmetric rate point in the ...
Samuel H. Florin, et al. ∙

Follow Up on Detecting Deficiencies: An Optimal Group Testing Algorithm

Group testing is one of the fundamental problems in coding theory and co...
Mira Gonen, et al. ∙

Group testing problem was introduced by Dorfman in [1]. Suppose that we have a population of t items, some of which are defective. Our task is to find all defective items by performing a minimal number of tests. The test is carried out on a properly chosen subset (pool) of the set of samples. The test outcome is positive if the tested set contains at least one defective element; otherwise, it is negative.

Define Np(t,s) to be the minimal worst-case total number of tests needed to find all s defective members of a set of t samples using at most p stages. Also define the optimal rate of p-stage search algorithm as

By the similar way we define the rate Rad(s) of fully adaptive algorithms.

We refer the reader to the monographs [7, 8] for a survey on group testing and its applications.

In addition, we refer to the work [10], where the best lower and upper bounds on R1(2) were established

For the case of p-stage algorithms, p>1, the only known upper bound is information-theoretic one

All of the lower bounds mentioned above were probabilistic. We want to refer to 2 constructive lower bounds for the case s=2. In [12] the authors obtained a 2-stage algorithm with rate 0.4. In [13] an explicit 4-stage testing scheme with rate 0.5 was constructed. This bound matches the information-theoretic upper bound, i.e. the presented 4-stage algorithms allow to achieve the same rate as a fully adaptive algorithm.

The aim of this work is a further development of the bounds on the rates R2(s).

In Section II, we introduce the notation and describe the hypergraph approach to group testing problem. In Section III, we establish Theorem 1 which states R2(2)=0.5. This result means that 2-stage testing schemes can achieve the same rate as fully adaptive algorithms for s=2. Theorem 4 proved in Section IV is a generalization of Theorem 1 for the case of arbitrary number of defectives. Numerical results and comparison with the best previously known bounds are presented in Table I. In section V, we consider the problem of finding m out of s defective elements. Theorem 5 shows that we can find [s/2]+1 defective elements with the rate 1/s. Finally, Section VI concludes the paper.

Throughout the paper we use t and s for the number of elements and defectives, respectively. By [t] we denote the set {1,2…,t}. The binary entropy function h(x) is defined as usual

Represent N non-adaptive tests with a binary N×t matrix X=∥xi,j∥ in the following way. An entry xi,j equal 1 if and only if jth element is included in ith test. Let u⋁v denote the disjunctive sum of binary columns u,v∈{0,1}N. For any subset S⊂[t]

which later will be called the outcome vector. By Sun, |Sun|=s, denote an unknown set of defects.

In the sequel, we consider 2-stage search algorithms. During the first stage, some pools are tested in parallel. Tests for the second stage depend on the outcomes of the first stage.

Let us describe the general idea of our approach. Suppose that we use a binary N×t matrix X at the first stage. As a result of performed tests we get the outcome vector y=r(X,Sun). Construct a hypergraph H(X,s,y)=(V,E) in the following way. The set of vertexes V coincides with the set of samples [t]. The set of edges consists of all sets S⊂[t], |S|=s, such that r(X,S)=y. In other words, the set of edges of the hypergraph H(X,s,y) represents all possible defective sets of size s. We want to construct a code X for the first stage such that for any possible outcome vector y the hypergraph H(X,s,y) has a constant number of edges. In that case, we need to test only the constant amount of non-isolated vertexes individually to find all defective elements. The asymptotic(t→∞) rate of such scheme is equal to the asymptotic rate of the code X.

We apply the plan described in the previous section to the case s=2. Note that in this case we have graph instead of hypergraph H.

As it was mentioned before, this bound matches the bound for a fully adaptive algorithm. In addition, the algorithm from this theorem can be used to find not only 2 defectives but also at most 2 defectives. But to keep things simple, here we consider only the case of exactly 2 defectives.

X of size N×t, each columns of which is chosen independently and uniformly from the set off all columns of weight wN, 0<w<1. To keep the notation simple, we ignore the fact that wN may not be an integer. Fix the constant L and consider a graph Gy=H(X,2,y), where vector y is from {0,1}N.

If the maximum vertex degree and the maximum cardinality of a matching in a graph G=(V,E) don’t exceed L, then |E|≤2L2.

For any R<0.5 and w=1−√2/2, there exists an integer L such that for t=⌊2RN⌋ the mathematical expectation of the number of bad indexes less than 1 for N big enough.

Let us show how the Theorem 1 can be deduced from these two propositions. Indeed, take the parameters w, R, L from Proposition 2. Thus, for N big enough there exists a N×t matrix X without bad indexes. Use that matrix X as a testing matrix at the first stage. There is no bad indexes, therefore, for any outcome vector y=r(X,Sun) graph Gy does not contain a matching of size greater than L or a vertex with a degree greater than L. Applying the proposition 1 to the graph Gy, we conclude that it has at most 2L2 edges. We finish the search procedure by testing all non-isolated vertexes of the graph Gy individually.

Now we prove propositions 1 and 2.

Fix an arbitrary maximum matching M⊂E, |M|≤L, in the graph G=(V,E). Denote the set of endpoints of M as U⊂V, |U|≤2L. Since M is a maximum matching, every edge e has at least one endpoint in the set U. Therefore, the total number of edges is upper bounded by

The probability that a fixed index

Therefore, the mathematical expectation of the number of bad indexes can be upper bounded as follows

Take L such that R(L+1)−0.5L=−1−ε, ε>0. Then the mathematical expectation of the number of bad indexes is less than

Taking the logarithm and dividing by N, we obtain

For w=1−√2/2 the maximal value of the left-hand side is equal to −1, therefore, the inequality holds.

The theorem is proved. ∎

Suppose, seeking a contradiction, that a hypergraph H=(V,E) without bad configurations contains more than c(s,L) edges. Exact formula for c(s,L) will be specified later. Construct a complete graph ^G=K|E|, which vertex set V={e1,…,e|E|} corresponds to the edges of hypergraph H. Color the edge f=(e1,e2) of the graph ^G in color i+1, if the cardinality of the intersection e1∩e2 is equal to i, i=0,1,…,s−1.

Recall that Ramsey number R(c1,…,cl) is a minimal integer n such that if the edges of a complete graph Kn are colored with l different colors, then for some i between 1 and c, the graph must contain a complete subgraph of size ci whose edges are all color i. Here we need only the fact that the number R(c1,…,cl) exists.

Consider an edge e1. Any other edge from the set E0 has k common vertexes with e1. Taking c0(s,L)>(sk)(L−1), we obtain that some k vertexes v1,…,vk belong to another L−1 edges w1,…wL−1 from the set E0. But then the set of edges e1,w1,…,wL−1 forms bad configuration of type k. This contradiction proves the proposition. ∎

Using Proposition 3 we conclude that the hypergraph H(X,s,y) has at most c(s,L) edges. Thus, we can find all defectives by testing all non-isolated vertices individually at the second stage. The number of tests at the second stage doesn’t depend on the number of elements t, therefore, taking limits t→∞ and L→∞ we obtain the inequality (6).

To obtain a lower bound on the rate R(s,∞,K) we use a random coding method.

The proof of this lemma can be found in the Appendix.

Lemma 3 and Lemma 2 give us

The best lower bounds for the case s>2 are given by disjunctive list-decoding codes with the length of the list L→∞ [9]. In Table I we compare bounds given by Theorem 4 with the best previously known lower bounds.

The problem of finding m out of s defectives with the help of non-adaptive algorithms was formulated in [14] for m=1 and in [15] for the general case. The best results were obtained in [16, 17], where the following bound was proved

for some constants c1 and c2.

This proof is based on the following technical lemma.

The proof of this lemma is postponed to the Appendix. Let us show how it implies the theorem. Use (s,L,{0,1,…,⌊s/2⌋})-good code X of size t as a test matrix at the first stage. Then for any outcome vector y hypergraph H(X,s,y)=(V,E) doesn’t contain (s,L,k)-bad configurations for k=0,1,…⌊s/2⌋. Form subset of edges E1⊂E such that for every e1,e2∈E1 the intersection e1∩e2 has at most ⌊s/2⌋ vertices, and for every e1∈E1, e2∈E∖E1 the intersection e1∩e2 has at least ⌊s/2⌋+1 vertices. Such subset can be constructed greedily by adding edges one by one while it is possible. At the second stage we test all non-isolated vertices of the hypergraph H1=(V,E1). At least ⌊s/2⌋+1 vertices of every edge e∈E will be tested by construction of E1, thus, we will find at lest ⌊s/2⌋+1 defectives. The number of tests at the second stage is upper bounded by s∥E1∥. The hypergraph H1=(V,E1) doesn’t contain any (s,L,k)-bad configurations for k=0,1,…,s−1. Using proposition 3 we conclude that |E1|≤c(s,L). Therefore, the number of tests at the second stage doesn’t depend on the total number of elements t. Taking limits t→∞ and L→∞ and using lemma 6 we obtain the desired inequality (14). ∎

A new algorithm for two-stage group testing was proposed, which improves previously known results. For the case of 2 defectives, this algorithm has the optimal rate 0.5. Also, a two-stage algorithm which finds at least half of the defectives with the rate 1/s was constructed.

Development of the algorithm, which will achieve the optimal rate for the number of defectives greater than 2, is a natural open problem. Another interesting task is to obtain an upper bound on the rate Rp(s), p>1, which is stronger than information-theoretic bound 1/s.

We note that the technique used in this paper could be also applied to another group testing models, such as, for example, symmetric or threshold group testing.