A Neural Network Based Method to Solve Boundary Value Problems

A Neural Network (NN) based numerical method is formulated and implemented for solving Boundary Value Problems (BVPs) and numerical results are presented to validate this method by solving Laplace equation with Dirichlet boundary condition and Poisson's equation with mixed boundary conditions. The principal advantage of NN based numerical method is the discrete data points where the field is computed, can be unstructured and do not suffer from issues of meshing like traditional numerical methods such as Finite Difference Time Domain or Finite Element Method. Numerical investigations are carried out for both uniform and non-uniform training grid distributions to understand the efficacy and limitations of this method and to provide qualitative understanding of various parameters involved. 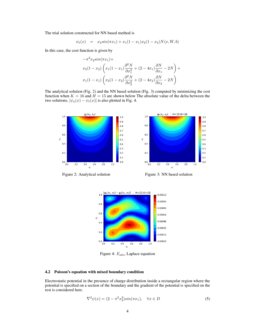 In the field of ElectroMagnetics (EM), Boundary Value Problems (BVPs) are the problems for which the EM field in a given region of space is determined from a knowledge of the field over the boundary of the region (BVP, ). Traditional numerical methods such as Finite Difference Time Domain (FDTD) and Finite Element Methods (FEM) are typically employed to solve BVPs. However, these methods involve discretization of the domain to reduce it to higher-order system of linear algebraic equations and solving for them. As such, these methods are not local i.e. they do not give the value of the solution directly at an arbitrary point, where the field needs to be determined, but its value should be extracted from the complete field solution and hence are not amenable to parallel processing.

. The principal advantages of the NN based numerical method are the discrete data points where field is computed, can be unstructured and therefore, the issues of meshing (uniform/non-uniform) are not a factor; the solutions are in a differentiable, closed analytic form which avoids the need to interpolate between data points where solutions are obtained using other methods. Also, recent advances in the field of Machine Learning (ML) and Artificial Intelligence (AI) has jump started the design and implementation of computer architectures that are optimized to implement training and inference tasks more efficiently. Since, this NN based numerical method is inherently parallel and hence can be efficiently implemented on parallel architectures, it stands to gain from advances in AI based computer architectures. In this study, NN based field computation is formulated and presented for BVPs with Dirichlet boundary condition and BVPs with mixed boundary conditions on a uniform rectangular grid. Multiple non-uniform training grid distributions are also explored in this study to showcase that this method is not limited by the domain discretization like traditional methods.

BVPs, where the EM field ψ(x)

is given by the linear second order partial differential equation (PDE), are considered in this study

N(x,W,b) is a feed forward NN with weights W and biases b. F(x) is chosen such that second part does not contribute to boundary conditions.

In such a case, the task of field computation reduces to learning the NN parameters, W and b, which is done by first transforming the equation (1) to a discretized version and applying it at discretized domain, ^D={x(i)∈D;i=1,⋯,m}.

and then training the NN, where the PDE error or cost corresponding to x(i)has to become zero.

Note that the computation of this cost function involves not only the network output, but also the derivatives of the output with respect to any of its inputs.

The neural network that will be implemented for this solution is a 3-layer network with an input layer (n+1 nodes), a hidden layer (H nodes) and an output layer (1 node) as shown in Fig.1

will be used as activation function for the hidden layer.

For this neural network, it can be shown that

Therefore, first order derivate of N, with respect to any input parameter xj is given by

which can be interpreted as the output of the feedforward neural network of same schematic, where the activation function for the hidden layer is given by the first order derivative of sigmoid, instead of sigmoid and the W[2] replaced by W[2]∘W[1]j.

Electrostatic potential distribution inside a rectangular region where the potential on the boundary is specified, is given by the Laplace equation with Dirichlet boundary condition in a 2D rectangular region janaswamy . NN based method is used to compute the solution and compared with the analytical solution stanford .

The boundary conditions are

The analytical solution is

The trial solution constructed for NN based method is

In this case, the cost function is given by

The analytical solution (Fig. 2) and the NN based solution (Fig. 3) computed by minimizing the cost function when K=16 and H=15 are shown below The absolute value of the delta between the two solutions, |ψa(x)−ψt(x)| is also plotted in Fig. 4.

The mixed boundary conditions are

The analytical solution is

The trial solution constructed for NN based method is

In this case, the cost function is given by

and relative error norm as given by

Eabs gives us information about the spatial distribution of the divergence between analytical and NN based solution, while the Enorm paints an aggregate picture over the entire domain.

There is a subtle, but important point that needs to be understood when solving BVPs using NN, i.e training is driven by the cost function (or PDE error), while performance is gauged by the error in the computed field Mcfall .

Neural network was trained for various combinations of the number of hidden nodes, H and training grid resolution, K for the BVP with Laplace equation with Dirichlet boundary condition. For a fixed H=15, the variation of test set error when training grid resolution K=8,16,24,30 and 40 is shown in Fig.7. As K increases from 8 to 16, the Eabs becomes relatively narrower and Enorm decreases from 0.015 to 0.002, but plateaus beyond that resolution. Though it is intuitively expected that the test set error improves with increase in the training set size, as the learning model generalizes better, in this particular case, it could also be inferred in the context of the convergence theorem as well. As the PDE error is minimized at more training points, the convergence between analytical and NN based solution gets better.

As mentioned previously, one of the main advantages of NN based method is the training and testing dataset can be totally unstructured and hence they do not suffer from the issue of meshing like other numerical methods. To showcase this, four different grid structures, shown in the Fig.9 where each dot shows a training point in the training dataset, mtrain=256, are investigated in this study. Fig 8(a) shows “Grid-1”, the uniform discretization that will be used as baseline in this experiment; Two structured, but different spatial distributions are considered in “Grid-2" shown Fig 8(b), which has training points densely distributed closer to the boundary and coarsely away from it and the spatial distribution showing opposite trend in “Grid-3", shown in Fig 8(c). Fig 8(d) shows “Grid-4", the training dataset generated by uniform random distribution in [0,1]×[0,1].

Fig.10 shows the computed test set error for the four grid structures. “Grid-4" has the best error performance, followed by “Grid-1", while “Grid-2" and "Grid-3" show similar performance. This may be due to fact that the training dataset distribution “Grid-4" closely resembles the test dataset distribution, compared to the other distributions, as the testing grid is a uniform discretization with a grid resolution of 21. This demonstrates the NN based method’s merits when dealing with unstructured data and its potential to be applied to BVPs with curved or irregular boundaries.

In this study, a NN based numerical method has been formulated, implemented and validated for two examples with Dirichlet and mixed boundary conditions. Numerical experiments were carried out to assess the dependence of the error performance on training grid resolution and number of hidden nodes. To showcase the merit of this method, numerical results for structured and unstructured training dataset are presented as well.

Future efforts could explore application of this method to BVPs with curved or irregular boundaries. Some of the commonly found BVPs in EM are given by PDEs with complex coefficients, which could be the focus of future work as well.