A Neural Algorithm of Artistic Style

In fine art, especially painting, humans have mastered the skill to create unique visual experiences through composing a complex interplay between the content and style of an image. Thus far the algorithmic basis of this process is unknown and there exists no artificial system with similar capabilities. However, in other key areas of visual perception such as object and face recognition near-human performance was recently demonstrated by a class of biologically inspired vision models called Deep Neural Networks. Here we introduce an artificial system based on a Deep Neural Network that creates artistic images of high perceptual quality. The system uses neural representations to separate and recombine content and style of arbitrary images, providing a neural algorithm for the creation of artistic images. Moreover, in light of the striking similarities between performance-optimised artificial neural networks and biological vision, our work offers a path forward to an algorithmic understanding of how humans create and perceive artistic imagery. 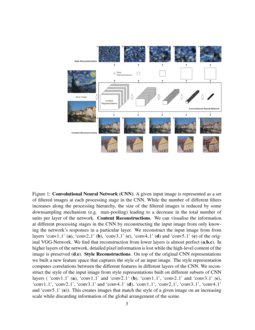 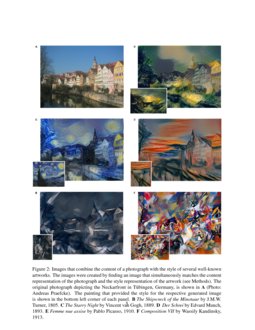 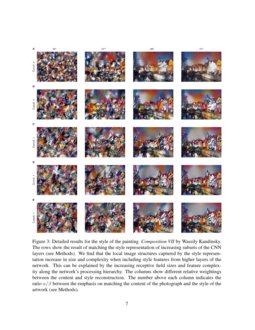 Neural Style Representations and the Large-Scale Classification of Artistic Style

The artistic style of a painting is a subtle aesthetic judgment used by ...
Jeremiah Johnson, et al. ∙

Learning to See: You Are What You See

An implementation of the paper 'A Neural Algorithm of Artistic Style'.

"A neural algorithm of Artistic style" in tensorflow

The results presented in the main text were generated on the basis of the VGG-Network [22], a Convolutional Neural Network that rivals human performance on a common visual object recognition benchmark task [23] and was introduced and extensively described in [22]

. We used the feature space provided by the 16 convolutional and 5 pooling layers of the 19 layer VGG-Network. We do not use any of the fully connected layers.The model is publicly available and can be explored in the caffe-framework

[24]. For image synthesis we found that replacing the max-pooling operation by average pooling improves the gradient flow and one obtains slightly more appealing results, which is why the images shown were generated with average pooling.

Generally each layer in the network defines a non-linear filter bank whose complexity increases with the position of the layer in the network. Hence a given input image →x is encoded in each layer of the CNN by the filter responses to that image. A layer with Nl distinct filters has Nl feature maps each of size Ml, where Ml is the height times the width of the feature map. So the responses in a layer l can be stored in a matrix Fl∈RNl×Ml where Flij is the activation of the ith filter at position j in layer l. To visualise the image information that is encoded at different layers of the hierarchy (Fig 1

, content reconstructions) we perform gradient descent on a white noise image to find another image that matches the feature responses of the original image. So let

from which the gradient with respect to the image →x

can be computed using standard error back-propagation. Thus we can change the initially random image

On top of the CNN responses in each layer of the network we built a style representation that computes the correlations between the different filter responses, where the expectation is taken over the spatial extend of the input image. These feature correlations are given by the Gram matrix Gl∈RNl×Nl, where Glij is the inner product between the vectorised feature map i and j in layer l:

To generate a texture that matches the style of a given image (Fig 1, style reconstructions), we use gradient descent from a white noise image to find another image that matches the style representation of the original image. This is done by minimising the mean-squared distance between the entries of the Gram matrix from the original image and the Gram matrix of the image to be generated. So let →a and →x be the original image and the image that is generated and Al and Gl their respective style representations in layer l. The contribution of that layer to the total loss is then

and the total loss is

where wl are weighting factors of the contribution of each layer to the total loss (see below for specific values of wl in our results). The derivative of El with respect to the activations in layer l can be computed analytically:

wl was always equal to one divided by the number of active layers with a non-zero loss-weight wl.

This work was funded by the German National Academic Foundation (L.A.G.), the Bernstein Center for Computational Neuroscience (FKZ 01GQ1002) and the German Excellency Initiative through the Centre for Integrative Neuroscience Tübingen (EXC307)(M.B., A.S.E, L.A.G.)