Multi-label learning studies the problem where an instance is associated with a set of labels. By treating single-label learning problem as one task, the multi-label learning problem can be casted as solving multiple related tasks simultaneously. In this paper, we propose a novel Multi-task Gradient Descent (MGD) algorithm to solve a group of related tasks simultaneously. In the proposed algorithm, each task minimizes its individual cost function using reformative gradient descent, where the relations among the tasks are facilitated through effectively transferring model parameter values across multiple tasks. Theoretical analysis shows that the proposed algorithm is convergent with a proper transfer mechanism. Compared with the existing approaches, MGD is easy to implement, has less requirement on the training model, can achieve seamless asymmetric transformation such that negative transfer is mitigated, and can benefit from parallel computing when the number of tasks is large. The competitive experimental results on multi-label learning datasets validate the effectiveness of the proposed algorithm. 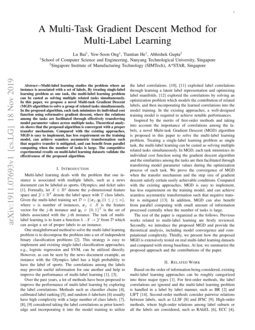 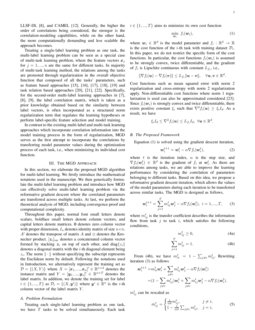 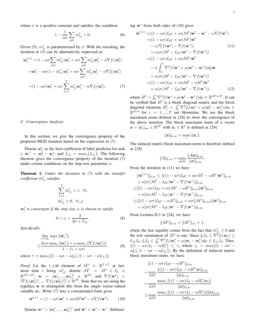 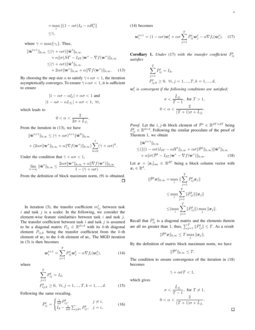 Multi-label classification is an important learning problem with many ap...
Ryan A. Rossi, et al. ∙

CCMN: A General Framework for Learning with Class-Conditional Multi-Label Noise

Multi-label learning deals with the problem that one instance is associated with multiple labels, such as a news document can be labeled as sports, Olympics, and ticket sales [1]. Formally, let X∈Rp denote the p-dimensional feature space and Y∈RT denote the label space with T class labels. Given the multi-label training set D={(xj,yj)|1≤j≤n}, where n is number of instances, xj∈X

is the feature vector for the

j-th instance and yj∈{0,1}T is the set of labels associated with the j-th instance. The task of multi-label learning is to learn a function h:X→Y from D which can assign a set of proper labels to an instance.

. This strategy is easy to implement and existing single-label classification approaches, e.g., logistic regression and SVM, can be utilized directly. However, as can be seen by the news document example, an instance with the Olympics label has a high probability to have the label of sports. The correlations among the labels may provide useful information for one another and help to improve the performance of multi-label learning

Over the past years, a lot of methods have been proposed to improve the performance of multi-label learning by exploring the label correlations. Methods such as classifier chains

Inspired by the merits of first-order methods and taking into account the importance of correlations among the labels, a novel Multi-task Gradient Descent (MGD) algorithm is proposed in this paper to solve the multi-label learning problem. Treating a single-label learning problem as single task, the multi-label learning can be casted as solving multiple related tasks simultaneously. In MGD, each task minimizes its individual cost function using the gradient descent algorithm and the similarities among the tasks are then facilitated through transferring model parameter values during the optimization process of each task. We prove the convergence of MGD when the transfer mechanism and the step size of gradient descent satisfy certain easily achievable conditions. Compared with the existing approaches, MGD is easy to implement, has less requirement on the training model, and can achieve seamless asymmetric transformation such that negative transfer is mitigated [13]. In addition, MGD can also benefit from parallel computing with small amount of information processed centrally when the number of tasks is large.

The rest of the paper is organized as the follows. Previous works related to multi-label learning are firstly reviewed. Secondly, we introduce the proposed MGD and provide the theoretical analysis, including model convergence and computational complexity. Thirdly, we present how the proposed MGD is extensively tested on real multi-label learning datasets and compared with strong baselines. At last, we summarize the proposed approach and the contributions of the paper.

Based on the order of information being considered, existing multi-label learning approaches can be roughly categorized into three major types [1]. For first-order methods, the label correlations are ignored and the multi-label learning problem is handled in a label by label manner, such as BR [2] and LIFT [14]. Second-order methods consider pairwise relations between labels, such as LLSF [8] and JFSC [9]. High-order methods, where high-order relations among label subsets or all the labels are considered, such as RAkEL [6], ECC [4], LLSF-DL [8], and CAMEL [12]. Generally, the higher the order of correlations being considered, the stronger is the correlation-modeling capabilities, while on the other hand, the more computationally demanding and less scalable the approach becomes.

, the label correlation matrix, which is taken as a prior knowledge obtained based on the similarity between label vectors, is often incorporated as a structured norm regularization term that regulates the learning hypotheses or perform label-specific feature selection and model training.

In contrast to the existing multi-label and multi-task learning approaches which incorporate correlation information into the model training process in the form of regularization, MGD serves as the first attempt to incorporate the correlations by transferring model parameter values during the optimization process of each task, i.e., when minimizing its individual cost function.

n×n. A′ denotes the transpose of matrix A and ⊗ denotes the Kronecker product. [zi]vec denotes a concatenated column vector formed by stacking zi on top of each other, and diag{zi} denotes a diagonal matrix with the i-th diagonal element being zi. The norm ∥⋅∥ without specifying the subscript represents the Euclidean norm by default. Following the notations used in Introduction, we alternatively represent the training set as D={(X,Y)} where X=[x1,...,xn]′∈Rn×d denotes the instance matrix and Y=[y1,...,yn]′∈Rn×T denotes the label matrix. In addition, we denote the training set for label i∈{1,...,T} as Di={(X,yi)} where yi∈Rn is the i-th column vector of the label matrix Y.

Treating each single-label learning problem as one task, we have T tasks to be solved simultaneously. Each task i∈{1,...,T} aims to minimize its own cost function

where wi∈Rd is the model parameter and fi:Rd→R is the cost function of the i-th task with training dataset Di. In this paper, we do not restrict the specific form of the cost functions. In particular, the cost functions fi(wi) is assumed to be strongly convex, twice differentiable, and the gradient of fi is Lipschitz continuous with constant Lfi, i.e.,

where t is the iteration index, α is the step size, and ∇fi(wti)∈Rd is the gradient of fi at wti. As there are relations among tasks, we are able to improve the learning performance by considering the correlation of parameters belonging to different tasks. Based on this idea, we propose a reformative gradient descent iteration, which allows the values of the model parameters during each iteration to be transferred across similar tasks. The MGD is designed as follows,

where mtij is the transfer coefficient describes the information flow from task j to task i, which satisfies the following conditions,

From (4b), we have mtii=1−∑j≠imtij. Rewriting iteration (3) as follows

mtij can be rescaled as

where σ is a positive constant and satisfies the condition

Given (5), mtij is parameterized by σ. With the rescaling, the iteration in (3) can be alternatively expressed as

In this section, we give the convergence property of the proposed MGD iteration based on the expression in (III-B).

Denote w∗i as the best coefficient of label predictor for task i, ~wit=wti−w∗i, and ¯Lfi=maxi{Lfi}. The following theorem gives the convergence property of the iteration (III-B) under certain conditions on the step-size parameter α.

The induced matrix block maximum norm is therefore defined as [24]

From the iteration in (III-C) we have

where the last equality comes from the fact that ¯mtij≥0 and the row summation of ¯Mt is one. Since ξiId≤∇2fi(wi)≤LfiId, ξiId≤∫10∇2fi(w∗i+μ(wi−w∗i)dμ≤LfiId. Thus, ∥(1−ασ)Id−αHti∥≤γi where γi=max{|1−ασ−αξi|,|1−ασ−αLfi|}. By the definition of induced matrix block maximum norm, we have

By choosing the step size α to satisfy ¯γ+ασ<1, the iteration asymptotically converges. To ensure ¯γ+ασ<1, it is sufficient to ensure

From the iteration in (III-C), we have

Under the condition that ¯γ+ασ<1,

From the definition of block maximum norm, (9) is obtained. ∎

Under (16) with the transfer coefficient ¯Ptij satisfies

wti is convergent if the following conditions are satisfied:

Let the i,j-th block element of ¯Pt∈RdT×dT being ¯Ptij∈Rd×d. Following the similar procedure of the proof of Theorem 1, we obtain

Recall that ¯Ptij is a diagonal matrix and the elements therein are all no greater than 1, thus, ∑Tj=1∥¯Ptij∥≤T. As a result

By the definition of matrix block maximum norm, we have

From the iteration in (III-B), we have

If fix ¯mtij=¯mij for all t, then, the last term in the brackets can be seen as the gradient of the following function

where w−i denotes the collection of other tasks’ variables, i.e., w−i=[w′1,...,w′i−1,w′i+1,...,w′T]′. Thus, the iteration in (III-D) with fixed ¯mij can be seen as the gradient descent algorithm which solves the following Nash equilibrium problem

Write the conditions in (20) in a concatenated form gives

where Li is the training loss of task i, λ is a positive regularization parameter, Σ∈RT×T models the task relations, and g(Σ) denotes constraints on Σ. For comparison, we eliminate the constraints on Σ, consider the case that Σ is fixed, and let f(w)=∑Ti=1Li(wi). Denote the optimal solutions of problem (21) as wg. The optimal solution satisfy the following condition,

Comparing the optimality conditions (20) and (22) for the Nash equilibrium problem (19) and the multi-task learning problem (21), we find that if ¯M can be set as

the optimal solution wo will be the same as wg. The only limitation is that ¯mij>0, which can not cover the situation where there exists non-negative non-diagonal values in Σ−1. Overall, the regularized multi-tasking learning problem with task relation learning can be solved by the MGD algorithm by setting the coefficients ¯mij between task i and task j properly. In addition, using MGD, we can consider feature-feature relations between different tasks since we can use ¯Pij∈Rd×d as the transfer coefficient. Furthermore, in MGD, ¯mij is not required to be equal to ¯mji. This relaxation allows asymmetric task relations in multi-task learning [13], which is hard to achieve by most multi-task learning methods since Σ−1+(Σ−1)T is always symmetric in (22).

Another category of regularized multi-task learning method is learning with feature relations [27]. The objective function of this kind of method is

where Θ∈Rd×d models the covariance between the features. The term wT(IT⊗Θ−1)w can be decoupled as ∑Ti=1wTiΘ−1wi, which can be incorporated into fi(wi) for task i, and Θ can be learned using all the tasks’ parameters during the optimization process using MGD.

The transfer coefficients can be designed or learned by many different methods. In multi-label learning problems, the similarity between task i and task j can be modeled by the correlation between labels yi and yj

. In this paper, we use the cosine similarity to calculate the correlation matrix. The proposed MGD is summarized in Algorithm

After learning the model parameter w∗i, we can predict the label yit for a test instance xt by the corresponding prediction function associated with the cost function, and the final predicted label vector is [y1t,...,yTt].

where h(zij)=P(yij=1|xj)=11+e−zij, zij=[1 xTj]wi, wi∈Rp+1 is the model parameter, wi,−1∈Rp is the remaining elements in wi except the first element, and ρ is the regularization parameter. The gradient of fi(wi) over wi is

The MGD iteration is