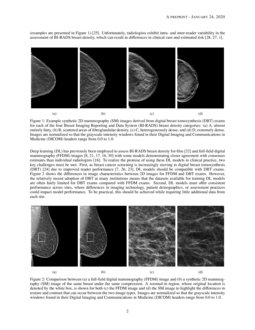 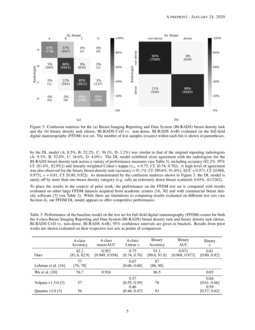 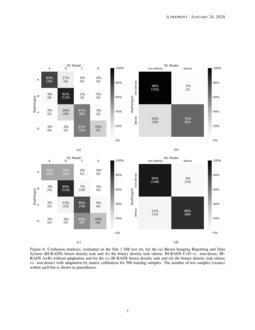 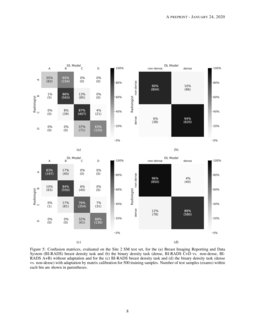 1) [25]. Unfortunately, radiologists exhibit intra- and inter-reader variability in the assessment of BI-RADS breast density, which can result in differences in clinical care and estimated risk [28, 27, 1].

Deep learning (DL) has previously been employed to assess BI-RADS breast density for film [32] and full-field digital mammography (FFDM) images [8, 21, 17, 16, 30] with some models demonstrating closer agreement with consensus estimates than individual radiologists [16]. To realize the promise of using these DL models in clinical practice, two key challenges must be met. First, as breast cancer screening is increasingly moving to digital breast tomosynthesis (DBT) [24] due to improved reader performance [7, 26, 23], DL models should be compatible with DBT exams. Figure 2 shows the differences in image characteristics between 2D images for FFDM and DBT exams. However, the relatively recent adoption of DBT at many institutions means that the datasets available for training DL models are often fairly limited for DBT exams compared with FFDM exams. Second, DL models must offer consistent performance across sites, where differences in imaging technology, patient demographics, or assessment practices could impact model performance. To be practical, this should be achieved while requiring little additional data from each site.

In this work, we present a BI-RADS breast density DL model that offers close agreement with the original reporting radiologists for both FFDM and DBT exams at two institutions. A DL model is first trained to predict BI-RADS breast density using a large-scale FFDM dataset from one institution. Then, the model is evaluated on a test set of FFDM exams as well as synthetic 2D mammography (SM) images generated as part of DBT exams (C-View, Hologic, Inc., Marlborough, MA), acquired from the same institution and from a separate institution. Adaptation techniques, requiring few SM images, are explored to improve performance on the two SM datasets.

The DL model and training procedure were implemented using the pytorch

DL framework (pytorch.org, version 1.0). The base model architecture is a pre-activation Resnet-34

, which accepts as input a single image corresponding to one of the views from a mammography exam, and produces estimated probabilities that the image belongs to each of the BI-RADS breast density categories. The model was trained using the FFDM dataset following the procedure described in Appendix

The goal of domain adaptation is to take a model trained on a dataset from one domain (source domain) and transfer its knowledge to a dataset in another domain (target domain), which is typically much smaller in size. Features learned by DL models in the early layers can be general, i.e. domain and task agnostic [33]. Depending on the similarity of domains and tasks, even deeper features learned from one domain can be reused for another domain or task.

In this work, we explore approaches for adapting the DL model trained on FFDM images (source domain) to SM images (target domain) that reuse all the features learned from the FFDM domain. First, inspired by the work of Guo et al. [9], we consider the addition of a small linear layer following the final fully-connected layer where either the 4×

4 matrix is diagonal (vector calibration) or the 4

×4 matrix is allowed to freely vary (matrix calibration). Second, we retrain the final fully-connected layer of the Resnet-34 model on samples from the target domain (fine-tuning).

To investigate the impact of the target domain dataset size, the adaptation techniques were repeated for different SM training sets across a range of sizes. The adaptation process was repeated 10 times for each dataset size with different training data in order to investigate the uncertainty arising from the selection of the training data. For each realization, the training images were randomly selected, without replacement, from the full training set. As a reference, a Resnet-34 model was trained from scratch, i.e. random initialization, for the largest number of training samples for each SM dataset.

Further details on these methods are provided in Appendix A.

To obtain an exam-level assessment, each image within an exam was processed by the DL model and the resulting probabilities were averaged. Several metrics were computed from these average probabilities for the 4-class BI-RADS breast density task and the binary dense (BI-RADS C+D) vs. non-dense (BI-RADS A+B) task: (1) accuracy, estimated based on concordance with the original reporting radiologists, (2) the area under the receiver operating characteristic curve (AUC), and (3) Cohen’s kappa (

https://scikit-learn.org, version 0.20.0). Confidence intervals (CI) were computed by use of non-Studentized pivotal bootstrapping of the test sets for 8000 random samples [4]. For the 4-class problem, macroAUC (the average of the four AUC values from the one vs. others tasks) and Cohen’s kappa with linear weighting are reported. For the binary density tasks, the predicted dense and non-dense probabilities were computed by summing the probabilities for the corresponding BI-RADS density categories.

To place the results in the context of prior work, the performance on the FFDM test set is compared with results evaluated on other large FFDM datasets acquired from academic centers [16, 30] and with commercial breast density software [3] (see Table 3). While there are limitations to comparing results evaluated on different test sets (see Section 4), our FFDM DL model appears to offer competitive performance.

3.2.3 Impact of Dataset Size on Adaptation

Breast Imaging Reporting and Data System (BI-RADS) breast density can be an important indicator of breast cancer risk and radiologist sensitivity, but intra- and inter-reader variability may limit the effectiveness of this measure. Deep learning (DL) models for estimating breast density can reduce this variability while still providing accurate assessments. However, in order to serve as a useful clinical tool, DL models need to demonstrate that they can be applied to digital breast tomosynthesis (DBT) exams and generalize across institutions. To overcome the limited training data for DBT exams, a DL model was trained on a large set of full-field digital mammography (FFDM) images. The model showed close agreement with the radiologists reported BI-RADS breast density for a test set of FFDM images (Site 1: κw = 0.75, 95% confidence interval (CI): [0.74, 0.76]) and for two datasets of synthetic 2D mammography (SM) images, which are generated as part of DBT exams (Site 1: κw = 0.71, CI: [0.64, 0.78]; Site 2: κw = 0.72, CI: [0.70, 0.75]). The strong performance on the SM datasets from different institutions suggests that the DL model may generalize to DBT exams and multiple sites. Further adaptation of the model for the SM datasets led to a limited improvement for Site 1 (κw = 0.72, CI: [0.66, 0.79]) and a more substantial improvement for Site 2 (κw = 0.79, CI: [0.76, 0.81]). The investigation of the impact of dataset size suggests that these adaptation methods could serve as practical approaches for adapting deep learning models if a model must be updated to account for site-specific differences.

When radiologists’ assessments are accepted as the ground truth, inter-reader variability may limit the performance that can be achieved for a given dataset. For example, the performance obtained on the Site 2 SM dataset following adaptation was higher than that obtained on the FFDM dataset used to train the model. This is likely a result of limited inter-reader variability for the Site 2 SM dataset due to over 80% of the exams having been read by only two readers.

). Here, BI-RADS breast density is estimated from 2D SM images instead of the 3D tomosynthesis volumes as this simplifies transfer learning from the FFDM images and mirrors the manner in which breast radiologists assess density.

This study has several limitations. First, the proposed domain adaptation approaches may be less effective when the differences between domains are larger. In this work, adaptation is from two types of mammography images produced by the same manufacturer. Second, the data from Site 1 was collected over a time period covering the transition from BI-RADS version 4 to BI-RADS version 5, during which the criteria for assessing BI-RADS breast density changed. Third, when a DL model is adapted to a new institution, adjustments may be made for differences in image content, patient demographics, or the interpreting radiologists. This last adjustment may result in a degree of inter-reader variability between the original and adapted DL models, though likely lower than the individual inter-reader variability if the model learns the consensus of each group of radiologists. As a result, the improved performance following adaptation for the Site 2 SM dataset could be due to differences in patient demographics or radiologist assessment practices compared with the FFDM dataset. The weaker improvement for the Site 1 SM dataset could be due to similarities in these same factors.

Still, the broad use of Breast Imaging Reporting and Data System (BI-RADS) breast density deep learning (DL) models holds great promise for improving clinical care. The success of the DL model without adaptation suggests that the features learned by the model are largely applicable to both full-field digital mammography (FFDM) images and synthetic 2D mammography (SM) images from digital breast tomosynthesis (DBT) exams as well as to different readers and institutions. A BI-RADS breast density DL model that can generalize across sites and image types could lead to fast, low-cost, and more consistent estimates of breast density for women.

[11, 10, 31]. It was trained using the full-field digital mammography (FFDM) dataset (see Table 1) by use of the Adam optimizer [13] with a learning rate of 10−4 and a weight decay of 10−3. Weight decay not was applied to the parameters belonging to the normalization layers. The input was resized to 416×320 pixels and the pixel intensity values were normalized so that the grayscale window denoted in the Digital Imaging and Communications in Medicine (DICOM) header ranged from 0.0 to 1.0. Training was performed using mixed precision [20] and gradient checkpointing [5] with batch sizes of 256 distributed across two NVIDIA GTX 1080 Ti graphics processing units (Santa Clara, CA). Each batch was sampled such that the probability of selecting a BI-RADS B or BI-RADS C sample was four times that of selecting a BI-RADS A or BI-RADS D sample, which roughly corresponds to the distribution of densities observed nationally in the United States [15]

. Horizontal and vertical flipping were employed for data augmentation. In order to obtain more frequent information on the training progress, epochs were capped at 100k samples compared with a total training set size of over 672k samples. The model was trained for 100 such epochs. Results are reported for the epoch that had the lowest cross entropy loss on the validation set, which occurred after 93 epochs.

https://scipy.org, version 1.1.0). The parameters were initialized such that the linear layer corresponded to the identity transformation. Training was stopped when the ℓ2 norm of the gradient was less than 10−6 or when the number of iterations exceeded 500. Retraining the last fully-connected layer for the fine-tuning method was performed by use of the Adam optimizer with a learning rate of 10−4 and weight decay of 10−5. The batch size was set to 64. The fully-connected layer was trained from random initialization for 100 epochs and results were reported for the epoch with the lowest validation cross entropy loss. Training from scratch on the synthetic 2D mammography (SM) datasets was performed following the same procedure as for the base model. For fine-tuning and training from scratch, the size of an epoch was set to the number of training samples.