State space models in which the system state is a finite set--called the multi-object state--have generated considerable interest in recent years. Smoothing for state space models provides better estimation performance than filtering by using the full posterior rather than the filtering density. In multi-object state estimation, the Bayes multi-object filtering recursion admits an analytic solution known as the Generalized Labeled Multi-Bernoulli (GLMB) filter. In this work, we extend the analytic GLMB recursion to propagate the multi-object posterior. We also propose an implementation of this so-called multi-scan GLMB posterior recursion using a similar approach to the GLMB filter implementation. 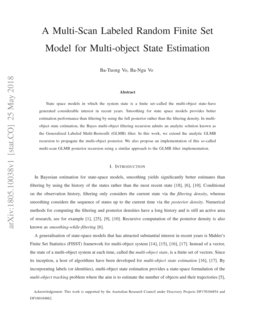 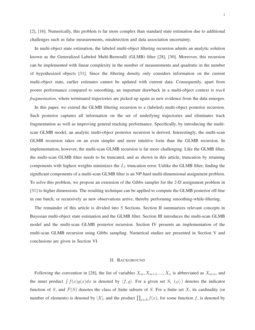 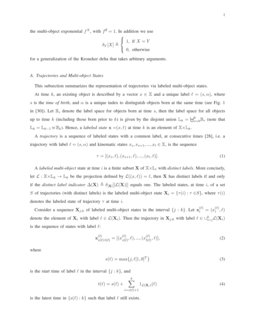 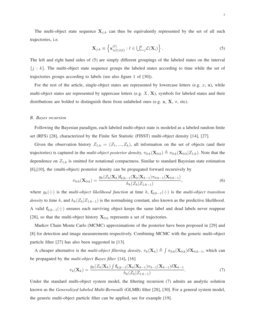 In Bayesian estimation for state-space models, smoothing yields significantly better estimates than filtering by using the history of the states rather than the most recent state [18], [6], [10]. Conditional on the observation history, filtering only considers the current state via the filtering density, whereas smoothing considers the sequence of states up to the current time via the posterior density. Numerical methods for computing the filtering and posterior densities have a long history and is still an active area of research, see for example [1], [25], [9], [10]. Recursive computation of the posterior density is also known as smoothing-while-filtering [6].

A generalisation of state-space models that has attracted substantial interest in recent years is Mahler’s Finite Set Statistics (FISST) framework for multi-object system [14], [15], [16, 17]

. Instead of a vector, the state of a multi-object system at each time, called the

In multi-object state estimation, the labeled multi-object filtering recursion admits an analytic solution known as the Generalized Labeled Multi-Bernoulli (GLMB) filter [28], [30]. Moreover, this recursion can be implemented with linear complexity in the number of measurements and quadratic in the number of hypothesized objects [31]. Since the filtering density only considers information on the current multi-object state, earlier estimates cannot be updated with current data. Consequently, apart from poorer performance compared to smoothing, an important drawback in a multi-object context is track fragmentation, where terminated trajectories are picked up again as new evidence from the data emerges.

Following the convention in [28], the list of variables Xm,Xm+1,...,Xn is abbreviated as Xm:n, and the inner product ∫f(x)g(x)dx is denoted by ⟨f,g⟩. For a given set S, 1S(⋅) denotes the indicator function of S, and F(S) denotes the class of finite subsets of S. For a finite set X, its cardinality (or number of elements) is denoted by |X|, and the product ∏x∈Xf(x), for some function f, is denoted by the multi-object exponential fX, with f∅=1. In addition we use

for a generalization of the Kroneker delta that takes arbitrary arguments.

This subsection summarizes the representation of trajectories via labeled multi-object states.

At time k, an existing object is described by a vector x∈X and a unique label ℓ=(s,α), where s is the time of birth, and α is a unique index to distinguish objects born at the same time (see Fig. 1 in [30]). Let Bs denote the label space for objects born at time s, then the label space for all objects up to time k (including those born prior to k) is given by the disjoint union Lk=⨄ks=0Bs (note that Lk=Lk−1⊎Bk). Hence, a labeled state x=(x,ℓ) at time k is an element of X×Lk.

A trajectory is a sequence of labeled states with a common label, at consecutive times [28], i.e. a trajectory with label ℓ=(s,α) and kinematic states xs,xs+1,...,xt∈X, is the sequence

Consider a sequence Xj:k of labeled multi-object states in the interval {j:k}. Let x(ℓ)i=(x(ℓ)i,ℓ) denote the element of Xi with label ℓ∈L(Xi). Then the trajectory in Xj:k with label ℓ∈∪ki=jL(Xi) is the sequence of states with label ℓ:

is the start time of label ℓ in the interval {j:k}, and

is the latest time in {s(ℓ):k} such that label ℓ still exists.

The multi-object state sequence Xj:k can thus be equivalently represented by the set of all such trajectories, i.e.

Given the observation history Z1:k=(Z1,...,Zk), all information on the set of objects (and their trajectories) is captured in the multi-object posterior density, π0:k(X0:k)≜π0:k(X0:k|Z1:k). Note that the dependence on Z1:k is omitted for notational compactness. Similar to standard Bayesian state estimation [6],[10], the (multi-object) posterior density can be propagated forward recursively by

Markov Chain Monte Carlo (MCMC) approximations of the posterior have been proposed in [29] and [8] for detection and image measurements respectively. Combining MCMC with the generic multi-object particle filter [27] has also been suggested in [13].

either survives with probability

Given a multi-object state Xk, each xk∈Xk is either detected with probability PD,k(xk) and generates a detection z with likelihood gD,k(z|xk) or missed with probability QD,k(xk)=1−PD,k(xk). The multi-object observation Zk is the superposition of the observations from detected objects and Poisson clutter with intensity κk. Assuming that, conditional on Xk, detections are independent of each other and clutter, the multi-object likelihood function is given by [28], [30]

Θk denotes the set of positive 1-1 maps (i.e. those that never assign distinct arguments to the same positive value) from Lk to {0:|Zk|}, and Θk(I) denotes the subset of Θk with domain I. The map θk assigns a detected label ℓ to measurement zθk(ℓ)∈Zk, while for an undetected label θk(ℓ)=0.

Given a state space X and a discrete space L, a generalized labeled multi-Bernoulli (GLMB) density on F(X×L) has the form [28]:

The GLMB family is closed under the Bayes multi-object filtering recursion (7) and an explicit expression relating the filtering density at time k to that at time k−1 is given by (14) of [31]. This recursion can be expressed in the following form111This involves a straight forward change of notation, but for completeness, details are given in Appendix VII-B., which complies with, and facilitates the generalisation to the posterior recursion:

Given the GLMB filtering density

at time k−1, GLMB filtering density at time k is given by

The number of components of the GLMB filtering density grows super-exponentially in time. Truncation by discarding components with small weights minimizes the L1 approximation error in the multi-object density [30]. This can be achieved by solving the ranked assignment problems using Murty’s algorithm or Gibbs sampling [31].

Recall the equivalence between the multi-object state sequence Xj:k and the set {x(ℓ)s(ℓ):t(ℓ):ℓ∈∪ki=jL(Xi)} of trajectories in (5). For any function h taking the trajectories to the non-negative reals we introduce the following so-called multi-scan exponential notation:

The multi-scan exponential notation is quite suggestive since [gh]Xj:k=[g]Xj:k[h]Xj:k, and if the labels of Xj:k, Yj:k are disjoint then [h]Xj:k⊎Yj:k=[h]Xj:k[h]Yj:k (see Appendix VII-A for additional properties). It also provides an intuitive expression for the multi-object transition density in [28].

For completeness the proof is given in Appendix VII-C.

Similar to the GLMB, the multi-scan GLMB (22) can be expressed in the so-called δ-form:

where ξ∈ Ξ, Ij:k∈F(Lj)×...×F(Lk). Each term or component of a multi-scan GLMB consists of a weight w(ξ)(Ij:k) and a multi-scan exponential [p(ξ)]Xj:k with label history that matches Ij:k. The weight w(ξ)(Ij:k) can be interpreted as the probability of hypothesis (ξ,Ij:k), and for each ℓ∈∪ki=jL(Ii), p(ξ)(xs(ℓ):t(ℓ);ℓ) is the joint probability density of its kinematic states, given hypothesis (ξ,Ij:k).

The cardinality distribution, i.e. distribution of the number of trajectories is given by

As a special case, the probability of existence of trajectory with label ℓ is

The distribution of trajectory lengths is given by

Similar to its single-scan counterpart, a number of estimators can be constructed for a multi-scan GLMB. The simplest would be to find the multi-scan GLMB component with the highest weight w(ξ)(Ij:k) and compute the most probable or expected trajectory estimate from p(ξ)(⋅;ℓ) for each ℓ∈∪ki=jL(Ii). Alternatively, instead of the most significant, we can use the most significant amongst components with the most probable cardinality n∗ (determined by maximizing the cardinality distribution (27)).

Under the standard multi-object system model, if the multi-object posterior at time k−1 is a multi-scan GLMB of the form

where ξ∈Ξ, then the multi-object posterior at time k is the multi-scan GLMB:

The multi-scan GLMB posterior recursion (33)-(34) bears remarkable resemblance to the GLMB filtering recursion (9)-(10). Indeed, the weight increments for multi-scan GLMB and GLMB components are identical. Arguably, the multi-scan GLMB recursion is more intuitive because it does not involve marginalization over previous label sets nor past states of the trajectories.

Without summing over the labels nor integrating the probability densities of the trajectories, the canonical expression for the multi-scan GLMB posterior takes on a rather compact form. To accomplish this, we represent each θk∈Θk by an extended association map γk:Lk→{−1:|Zk|} defined by

Then for any γk∈Γk, we can recover θk∈Θk by θk(ℓ)=γk(ℓ) for each ℓ∈L(γk). It is clear that there is a bijection between Θk and Γk, and hence θ1:k can be completely represented by γ1:k.

Starting with an empty initial posterior π0(X0)=δ0[L(X0)], by iteratively applying Proposition 7, the posterior at time k is given by