We consider a stationary Markov process that models certain queues with a bulk service of fixed number m of admitted customers. We find an integral expression of its transition probability function in terms of certain multi-orthogonal polynomials. We study the convergence of the appropriate scheme of simultaneous quadrature rules to design an algorithm for computing this integral expression. 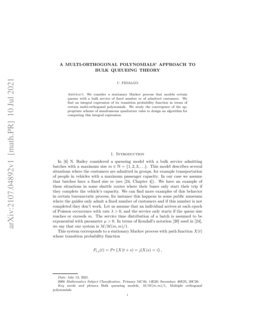 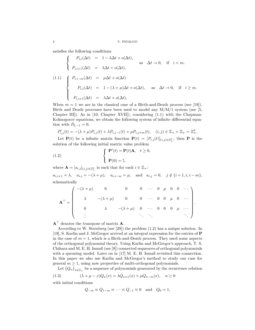 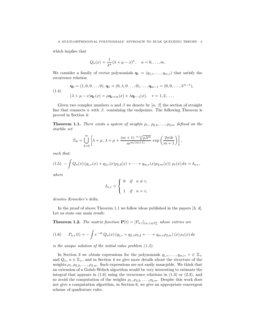 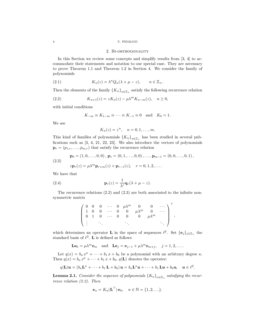 In this memorial tribute to Joe Gillis, who taught us that Special Funct...
Shalosh B. Ekhad, et al. ∙

PolyChaos.jl – A Julia Package for Polynomial Chaos in Systems and Control

In [6] N. Bailey considered a queueing model with a bulk service admitting batches with a maximum size m∈N={1,2,3,…}. This model describes several situations where the customers are admitted in groups, for example transportation of people in vehicles with a maximum passenger capacity. In our case we assume that batches have a fixed size m (see [24, Chapter 4]

). We have an example of these situations in some shuttle routes where their buses only start their trip if they complete the vehicle’s capacity. We can find more examples of this behavior in certain bureaucratic process, for instance this happens in some public museums where the guides only admit a fixed number of customers and if this number is not completed they don’t work. Let us assume that an individual arrives at each epoch of Poisson occurrence with rate

λ>0, and the service only starts if the queue size reaches or exceeds m. The service time distribution of a batch is assumed to be exponential with parameter μ>0. In terms of Kendall’s notation [20] used in [24], we say that our system is M/M(m,m)/1.

When m=1 we are in the classical case of a Birth-and-Death process (see [19]). Birth and Death processes have been used to model any M/M/1 system (see [5, Chapter III]). As in [10, Chapter XVII]), considering (1.1) with the Chapman-Kolmogorov equations, we obtain the following system of infinite differential equation with P0,−1=0:

Let P(t) be a infinite matrix function P(t)=[Pi,j(t)](i,j)∈Z2+, then P is the solution of the following initial matrix value problem

A⊤ denotes the transpose of matrix A.

We consider a family of vector polynomials

qr=(q1,r,…,qm,r) that satisfy the recurrence relation

Given two complex numbers α and β we denote by [α,β] the section of straight line that connects α with β. containing the endpoints. The following Theorem is proved in Section 4:

There exists a system of weights ρ1, ρ2,2,…,ρ2,m defined on the starlike set

In the proof of above Theorem 1.1 we follow ideas published in the papers [3, 4]. Let us state our main result:

is the unique solution of the initial value problem (1.2).

. Such expressions are not easily manejable. We think that an extension of a Golub-Welsch algorithm would be very interesting to estimate the integral that appears in (

1.6) using the recurrence relations in (1.3) or (2.3), and so avoid the computation of the weights ρ1,ρ2,2,…,ρ2,m. Despite this work does not give a computation algorithm, in Section 6, we give an appropriate convergent scheme of quadrature rules.

In this Section we review some concepts and simplify results from [3, 4] to accommodate their statements and notation to our special case. They are necessary to prove Theorem 1.1 and Theorem 1.2 in Section 4. We consider the family of polynomials

This kind of families of polynomials {Kn}n∈Z+ has been studied in several publications such as [3, 4, 21, 22, 23]. We also introduce the vectors of polynomials pr=(p1,r,…,pm,r) that satisfy the recurrence relation

The recurrence relations (2.2) and (2.3) are both associated to the infinite non-symmetric matrix

which determines an operator L in the space of sequences ℓ2. Set {ej}j∈Z+ the standard basis of ℓ2. L is defined as follows

Consider the sequence of polynomials {Kn}n∈Z+ satisfying the recurrence relation (2.2). Then

The proof is completed by induction. ∎

Consider the sequence of vector polynomials {pr}r∈Z+ satisfying the recurrence relation (2.3) and denote E=(e0,…,em−1). Then

The proof is completed by induction. ∎

In ℓ2 we consider the regular inner product. This is that given two u={uj∈C}j∈Z+ and v={vj∈C}j∈Z+ elements of ℓ2

where v⋆ represents the complex conjugate transpose operator of v. When v is real v⋆=v⊤.

From Lemma 2.1 and Lemma 2.2 we have immediately

3. An algebraic equation: some properties

In [4] the following the algebraic equation is sudied:

We enumerate some needed properties of its multivalued solution ω(z), which is an algebraic function of order m+1 and genus 0. Its inverse rational function

gives the composition of a conformal map of the Riemann sphere ¯¯¯¯C to a Riemann surface R of the function ω(z) and the projection of R to the complex plane. In order to describe this surface R we introduce certain concepts and notations, and also review some results stated in [4]. Given a complex numbers α we denote by [α,∞)×exp(iθ) with θ∈R, the ray starts at α∈C with slope tanθ. Set

Let us declare the following sets:

In S0 the inequalities are strict.

Let us describe then the Riemann surface R associated to the multi-valued function ω(z) such that the sheet structure corresponds to the choice of branches as above in (3.4). Let π denote the projection of R on C, with π−1 (multivalued) representing its inverse branches. We have that

We also denote ∂Rj,k a closed contour in C2 which separates Rj and Rk. The contour ∂Rj,k is orientated such that Rj lies on the left, this is positive side. We take

We now sketch the proof of [4, Proposition 1] where some properties of the multivalued function ω in (3.1), are stated and they are needed for our purposes. From Vieta’s relations in (3.1) we have that the solutions ωj, j=0,…,m of (???) satisfy that

Combining (3.2) and (3.5) we have that ω (multivalued function) has a branch point at infinity of order m−1. Then we suppose that ω’s branches, denoted by ω0,…,ωm, have the following behavior

When m is even there also is a negative branch of ω on R+, that we denote by ωm. Then we can introduce the notation

Let us define an analytic continuation of ω from R+ to C. Consider ω a solution of (3.1), then the following equality holds

Taking into account the behavior at infinity in (3.6), the branch ω1 has an analytic continuation from R+∖[0,a] to the simple connected domain

Starting from above set ˜A and using (3.8) with j=1 we extend analytically ω1 as follows

So combining the above identity with (3.8) we have that ω1 satisfies the jump condition

We proceed analogously with the remaining branches of ω. Consider the fundamental sector of C

We extend the branches to C∖A using the symmetry relations in (3.8):

and define the function ω1,2∈H(B) as follows

Once we have sketched the proof of the relations (3.4), we define

Using (3.4) we observe that the following functions defined on ∘S0, are real valued and never change sign.

Let us express the polynomials Kn n∈N satisfying the recurrence relation (2.2) and the vector polynomials pr in (2.3), r∈N in terms of the solutions of the equation (3.1).

Given r∈N, the vector polynomial pr has the form

In (3.14) we follow the steps of [3]. We observe that the following function satisfies the recurrence relation (2.2)

The coefficients A0(z),A1(z),…,Am(z) are defined from the initial conditions:

From Cramer’s rule we find

We also have that