A monadic solution to the Cartwright-Felleisen-Wadler conjecture

Given a programming language, can we give a monadic denotational semantics that is stable under language extension? Models containing only a single monad are not stable. Models based on type-and-effect systems, in which there is a monad for every set of operations in the language, are. Cartwright and Felleisen, and Wadler, conjectured such monadic semantics can be generated. We describe a new general method of constructing stable models from standard monadic models, based on factorizations of monad morphisms. We show that under certain conditions factorizations induce a monad for every set of operations, and explain why the conditions usually hold. We also describe preliminary work using fibrations for logical relations generated from these factorization systems for proving the correctness of the resulting model. 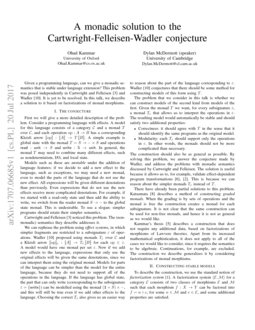 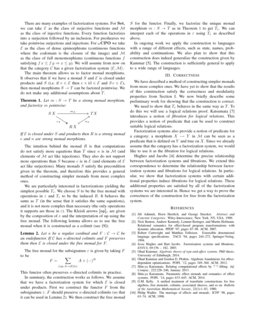 A coercion semantics of a programming language with subtyping is typical...
Dariusz Biernacki, et al. ∙

Denotational Correctness of Foward-Mode Automatic Differentiation for Iteration and Recursion

On the Semantics of Gringo

The far side of the cube

First we will give a more detailed description of the problem. Consider a programming language with effects. A model for this language consists of a category C and a monad T over C, and each operation op:A→B has a corresponding Kleisli arrow ⟦op⟧:⟦A⟧→T⟦B⟧. A simple example is global state with the monad T=S→−×S and operations read:unit→S and write:S→unit. In general, the monad T may need to combine many different effects, such as nondeterminism, I/O, and local state.

Models such as these are unstable under the addition of language features: if we decide to add a new effect to the language, such as exceptions, we may need a new monad, even to model the parts of the language that do not use the new effect. All expressions will be given different denotations than previously. Even expressions that do not use the new effects receive more complicated denotations. For example, if we started with a read-only state and then add the ability to write, we switch from the reader monad S→− to the global state monad. This is undesirable. To use a slogan: simpler programs should retain their simpler semantics.

Cartwright and Felleisen [3] noticed this problem. The (non-monadic) semantics they describe addresses it.

We can rephrase the problem using effect systems, in which simpler fragments are restricted to a subsignature ϵ of operations. Wadler [10] proposed using monads Tϵ over C and a Kleisli arrow ⟦op⟧ϵ:⟦A⟧→Tϵ⟦B⟧ for each op∈ϵ. A model would have one monad per set ϵ. Now if we add new effects to the language, expressions that only use the original effects will be given the same denotations, since we can interpret them using the original monad. Models for parts of the language can be simpler than the model for the entire language, because they do not need to support all of the operations in the language. If the language has global state, the part that can only write (corresponding to the subsignature ϵ={write}) can be modelled using the monad (1+S)×−, and this will still be true even if we add other effects to the language. Choosing the correct Tϵ also gives us an easier way to reason about the part of the language corresponding to ϵ. Wadler [10] conjectures that there should be some method for constructing models of this form using T.

The problem that we consider in this talk is whether we can construct models of the second kind from models of the first. Given the monad T we want, for every subsignature ϵ, a monad Tϵ that allows us to interpret the operations in ϵ. The resulting model would automatically be stable and should satisfy two additional properties:

The construction should also be as general as possible. By solving this problem, we answer the conjecture made by Wadler, and address the problems with monadic semantics discussed by Cartwright and Felleisen. The solution is useful because it allows us to, for example, validate effect-dependent program transformations [6, 2]. This is because we can reason about the simpler monads Tϵ instead of T.

There have already been partial solutions to this problem. Katsumata [8] describes a method of constructing graded monads. When the grading is by sets of operations and the monad is free the construction creates a monad for each subsignature. It is not clear that the same construction can be used for non-free monads, and hence it is not as general as we would like.

Kammar’s thesis [5] describes a construction that does not require any additional data, based on factorizations of morphisms of Lawvere theories. Apart from its increased mathematical sophistication, it does not apply to all of the cases we would like to consider, since it requires the semantics to be algebraic. Continuations, for example, are excluded. The construction we describe generalizes it by considering factorizations of monad morphisms.

To describe the construction, we use the standard notion of factorization system [1]. A factorization system \pairEM for a category C consists of two classes of morphisms E and M such that each morphism f:X→Y can be factored into f=n\composee, for some n∈M and e∈E, and some additional properties are satisfied.

The main theorem allows us to factor monad morphisms. It observes that if we have a monad S and E is closed under products and S (i.e. if e∈E then e×id∈E and Se∈E), then monad morphisms S→T can be factored pointwise. We do not make any additional assumptions about T.

The intuition behind the monad R is that computations do not satisfy more equations than T since n is in M (and elements of M act like injections). They also do not support more operations than S because e is in E (and elements of E act like surjections). Many monads S satisfy the precondition given in the theorem, and therefore this provides a general method of constructing simpler monads from more complex ones.

We are particularly interested in factorizations yielding the simplest possible Tϵ. We choose S to be the free monad with operations in ϵ and Tϵ to be the induced R. It behaves the same as T (in the sense that it satisfies the same equations), and it is not more complex than necessary (the only operations it supports are those in ϵ). The Kleisli arrows ⟦op⟧ϵ are given by the composition of e and the interpretation of op using the free monad. The following lemma allows us to use the free monad when it is constructed as a colimit (see [9]).

Let κ be a regular cardinal and F:C→C be an endofunctor. If C has κ-directed colimits and F preserves them then E is closed under the free monad for F.

In summary, the construction works as follows. We assume that we have a factorization system for which E is closed under products. First we construct the functor F from the subsignature ϵ. F should preserve κ-directed colimits (so that it can be used in Lemma II). We then construct the free monad S for the functor. Finally, we factorize the unique monad morphism m:S→T as in Theorem II to get Tϵ. We can interpret each of the operations in ϵ using Tϵ as described above.

In ongoing work we apply the construction to languages with a range of different effects, such as state, names, probability and continuations. We also plan to show that this construction does indeed generalize the construction given by Kammar

[5]. The construction is sufficiently general to apply to a wide range of languages.

We have described a method of constructing simpler monads from more complex ones. We have yet to show that the results of this construction satisfy the correctness and modularity properties from Section I. We now briefly describe some preliminary work for showing that the construction is correct.

Factorization systems also provide a notion of predicate for a category: a morphism X↣Y in M can be seen as a predicate that is defined on Y and true on X. Since we already assume that the category has a factorization system, we would like to use it as the fibration for logical relations.