A modifiction of the CSP algorithm for infinite languages 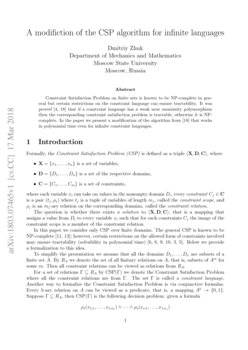 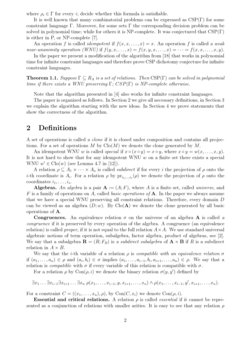 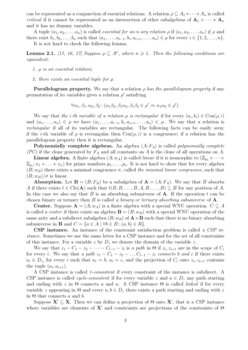 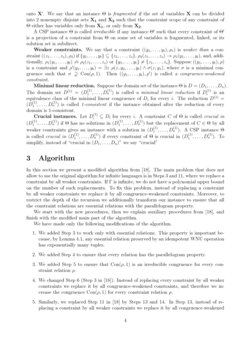 We study the Constraint Satisfaction Problem CSP(A), where A is first-or...
Manuel Bodirsky, et al. ∙

In 2007 it was conjectured that the Constraint Satisfaction Problem (CSP...
Dmitriy Zhuk, et al. ∙

A temporal (constraint) language is a relational structure with a first-...
Michał Wrona, et al. ∙

Formally, the Constraint Satisfaction Problem (CSP) is defined as a triple ⟨X,D,C⟩, where

The question is whether there exists a solution to ⟨X,D,C⟩, that is a mapping that assigns a value from Di to every variable xi such that for each constraints Cj the image of the constraint scope is a member of the constraint relation.

In this paper we consider only CSP over finite domains. The general CSP is known to be NP-complete [11, 13]; however, certain restrictions on the allowed form of constraints involved may ensure tractability (solvability in polynomial time) [6, 8, 9, 10, 3, 5]. Below we provide a formalization to this idea.

To simplify the presentation we assume that all the domains D1,…,Dn are subsets of a finite set A. By RA we denote the set of all finitary relations on A, that is, subsets of Am for some m. Then all constraint relations can be viewed as relations from RA.

For a set of relations Γ⊆RA by CSP(Γ) we denote the Constraint Satisfaction Problem where all the constraint relations are from Γ. The set Γ is called a constraint language. Another way to formalize the Constraint Satisfaction Problem is via conjunctive formulas. Every h-ary relation on A can be viewed as a predicate, that is, a mapping Ah→{0,1}. Suppose Γ⊆RA, then CSP(Γ) is the following decision problem: given a formula

where ρi∈Γ for every i; decide whether this formula is satisfiable.

It is well known that many combinatorial problems can be expressed as CSP(Γ) for some constraint language Γ. Moreover, for some sets Γ the corresponding decision problem can be solved in polynomial time; while for others it is NP-complete. It was conjectured that CSP(Γ) is either in P, or NP-complete [7].

Suppose Γ⊆RA is a set of relations. Then CSP(Γ) can be solved in polynomial time if there exists a WNU preserving Γ; CSP(Γ) is NP-complete otherwise.

Note that the algorithm presented in [4] also works for infinite constraint languages.

The paper is organized as follows. In Section 2 we give all necessary definitions, in Section 3 we explain the algorithm starting with the new ideas. In Section 4 we prove statements that show the correctness of the algorithm.

Algebras. An algebra is a pair A:=(A;F), where A is a finite set, called universe, and F is a family of operations on A, called basic operations of A. In the paper we always assume that we have a special WNU preserving all constraint relations. Therefore, every domain D can be viewed as an algebra (D;w). By Clo(A) we denote the clone generated by all basic operations of A.

Congruences. An equivalence relation σ on the universe of an algebra A is called a congruence if it is preserved by every operation of the algebra. A congruence (an equivalence relation) is called proper, if it is not equal to the full relation A×A. We use standard universal algebraic notions of term operation, subalgebra, factor algebra, product of algebras, see [2]. We say that a subalgebra R=(R;FR) is a subdirect subalgebra of A×B if R is a subdirect relation in A×B.

For a relation ρ by Con(ρ,i) we denote the binary relation σ(y,y′) defined by

and it has no dummy variables.

It is not hard to check the following lemma.

Linear algebra. A finite algebra (A;wA) is called linear if it is isomorphic to (Zp1×⋯×Zps;x1+…+xn) for prime numbers p1,…,ps. It is not hard to show that for every algebra (B;wB) there exists a minimal congruence σ, called the minimal linear congruence, such that (B;wB)/σ is linear.

A CSP instance Θ is called irreducible if any instance Θ′ such that every constraint of Θ′ is a projection of a constraint from Θ on some set of variables is fragmented, linked, or its solution set is subdirect.

In this section we present a modified algorithm from [18]. The main problem that does not allow to use the original algorithm for infinite languages is in Steps 3 and 11, where we replace a constraint by all weaker constraints. If Γ is infinite, we do not have a polynomial upper bound on the number of such replacements. To fix this problem, instead of replacing a constraint by all weaker constraints we replace it by all congruence-weakened constraints. Moreover, to restrict the depth of the recursion we additionally transform our instance to ensure that all the constraint relations are essential relations with the parallelogram property.

We start with the new procedures, then we explain auxiliary procedures from [18], and finish with the modified main part of the algorithm.

We have made only the following modifications of the algorithm.

Finding an appropriate projection. Suppose ρ⊆A1×⋯×An, α=(a1,…,an)∉ρ. Here we explain how to find a minimal subset I⊆{1,…,n} such that prI(α)∉prI(ρ). Note that prI(ρ) is always an essential relation.

Essential Representation. Suppose ρ⊆A1×⋯×An. An essential representation of ρ is the following formula

where δi is an essential relation from Γ, zi,j∈{x1,…,xn}, zi,j≠zi,k for every i and j≠k. Below we explain how to find a set G={I1,…,Is}, where Ii⊆{1,…,n} for every i, such that prI1(ρ),…,prIs(ρ) form an essential representation of ρ. To guarantee this property we require that every prIi(ρ) is essential and for every α∈(A1×⋯×An)∖ρ there exists i such that α∉prIi(ρ).

Note that the obtained essential representation of an essential relation consists of the original relation. Therefore, the above procedure can also be used to check whether a relation is essential.

By Lemma 4.1, every essential relation has exponentially many tuples, therefore, this procedure works in polynomial time on the size of ρ if ρ is an essential.

Provide cycle-consistency. To provide cycle-consistency it is sufficient to use constraint propagation providing (2,3)-consistency. Formally, it can be done in the following way. First, for every pair of variables (xi,xj) we consider the intersections of projections of all constraints onto these variables. The corresponding relation we denote by ρi,j. For every i,j,k∈{1,2,…,n} we replace ρi,j by ρ′i,j where ρ′i,j(x,y)=∃zρi,j(x,y)∧ρi,k(x,z)∧ρk,j(z,y). It is not hard to see that this replacement does not change the solution set.

We repeat this procedure while we can change some ρi,j

. If at some moment we get a relation

Solve the instance that is not linked. Suppose the instance Θ is not linked and not fragmented, then it can be solved in the following way. We say that an element di∈Di and an element dj∈Dj are linked if there exists a path that connects di and dj. Let P be the set of pairs (i;a) such that i∈{1,2,…,n}, a∈Di. Then P can be divided into the linked components.

Check irreducibility. For every k∈{1,2,…,n} and every maximal congruence σk on Dk we do the following.

In this section we provide an algorithm that solves CSP(Γ) in polynomial time for constraint languages Γ (finite or infinite) that are preserved by an idempotent WNU operation. We know that Γ is also preserved by a special WNU operation w. We extend Γ to the set of all relations preserved by w. Let the arity of the WNU w be equal to m. Suppose we have a CSP instance Θ=⟨X,D,C⟩, where X={x1,…,xn} is a set of variables, D={D1,…,Dn} is a set of the respective domains, C={C1,…,Cq} is a set of constraints.

Check whether Θ is cycle-consistent. If not then we reduce a domain Di for some i or state that there are no solutions.

Check whether Θ is irreducible. If not then we reduce a domain Di for some i or state that there are no solutions.

Replace every constraint by its essential representation.

By Theorem 4.13, if Θ has no solutions then we cannot get a solution while doing the following step.

By Lemma 4.18, if Θ has no solutions then we cannot get a solution in the following step.

If the congruence Con(ρ,1) is not irreducible for some constraint relation ρ, then replace the constraint by the corresponding congruence-weakened constraints and go to Step 3.

At the moment all constraint relations ρ have the parallelogram property and Con(ρ,1) is an irreducible congruence, therefore for every constraint there exists a unique congruence-weakened constraint.

By Theorems 4.8 and 4.11 we cannot loose the only solution while doing the following step.

If Di has a binary or ternary absorbing subuniverse Bi⊊Di for some i, then we reduce Di to Bi.

By Theorem 4.10 we can do the following step.

If there exists a congruence σ on Di such that the algebra (Di;w)/σ is polynomially complete, then we reduce Di to any equivalence class of σ.

By Theorem 4.5, it remains to consider the case when for every domain Di there exists a congruence σi on Di such that (Di;w)/σi is linear, i.e. it is isomorphic to (Zp1×⋯×Zpl;x1+⋯+xm) for prime numbers p1,…,pl. Moreover, σi is proper if |Di|>1.

Our general idea is to add some linear equations to ΘL so that for any solution of ΘL there exists the corresponding solution of Θ. We start with the empty set of equations Eq, which is a set of constraints on L1,…,Ln.

Check whether Θ has a solution in ϕ(0,…,0). If it has then stop the algorithm.

Put Θ′:=Θ. Iteratively remove from Θ′ all constraints that are weaker than some other constraints of Θ′.

In the following two steps we try to weaken the instance so that it still does not have a solution in ϕ(a1,…,ak) for some (a1,…,ak)∈Z.

At this moment, the CSP instance Θ′ has the following property. Θ′ has no solutions in ϕ(b1,…,bk) for some (b1,…,bk)∈Z but if we replace any constraint C∈Θ′ by the corresponding congruence-weakened constraints then we get an instance that has a solution in ϕ(a1,…,ak) for every (a1,…,ak)∈Z. Unlike the original algorithm, we cannot claim that Θ′ is crucial in ϕ(b1,…,bk). Nevertheless, Theorem 4.19 proves that we can finish the algorithm in the same way as in the original paper.

In the remaining steps we will find a new linear equation that can be added to ΘL. Suppose V is an affine subspace of Zhp of dimension h−1, thus V is the solution set of a linear equation c1x1+⋯+chxh=c0. Then the coefficients c0,c1,…,ch can be learned (up to a multiplicative constant) by (p⋅h+1) queries of the form “(a1,…,ah)∈V?” as follows. First, we need at most (h+1) queries to find a tuple (d1,…,dh)∉V. Then, to find this equation it is sufficient to check for every a and every i whether the tuple (d1,…,di−1,a,di+1,…,dh) satisfies this equation.

Suppose Θ′ is not linked. For each i from 1 to k

where σ=pr1,2(ξ), then we get a solution in ϕ(b1,…,bk). Otherwise, Theorem 4.14 implies that the replacement of ρ′′ by the minimal relation ρ′′′⊇ρ′′ having the parallelogram property still does not give a solution in ϕ(b1,…,bk). This contradicts the fact that if we replace any constraint C∈Θ′ by the corresponding congruence-weakened constraints then we get an instance that has a solution in ϕ(a1,…,ak) for every (a1,…,ak)∈Z. Thus, we know that the projection of L onto the first k coordinates is a full relation.

Therefore, L is defined by one linear equation. If this equation is z=b for some b≠0, then both Θ′ and Θ have no solutions. Otherwise, we put z=0 in this equation and get an equation that describes all (a1,…,ak) such that Θ′ has a solution in ϕ(a1,…,ak). It remains to find this equation.

Note that every time we reduce our domains, we get constraint relations that are still from Γ.

We have four types of recursive calls of the algorithm:

4 Correctness of the Algorithm

4.1 The size of an essential relation and depth of the recursion

Suppose ρ⊆An is an essential relation preserved by a special WNU w of arity m<n. Then |ρ|⩾2n−m+1