The Brinkman equations can be regarded as a combination of the Stokes and Darcy equations which model transitions between the fast flow in channels (governed by Stokes equations) and the slow flow in porous media (governed by Darcy's law). The numerical challenge for this model is the designing of a numerical scheme which is stable for both the Stokes-dominated (high permeability) and the Darcy-dominated (low permeability) equations. In this paper, we solve the Brinkman model in n dimensions (n = 2, 3) by using the mixed discontinuous Galerkin (MDG) method, which meets this challenge. This MDG method is based on the pseudostress-velocity formulation and uses a discontinuous piecewise polynomial pair P_k+1^S-P_k (k ≥ 0), where the stress field is symmetric. The main unknowns are the pseudostress and the velocity, whereas the pressure is easily recovered through a simple postprocessing. A key step in the analysis is to establish the parameter-robust inf-sup stability through specific parameter-dependent norms at both continuous and discrete levels. Therefore, the stability results presented here are uniform with respect to the permeability. Thanks to the parameter-robust stability analysis, we obtain optimal error estimates for the stress in broken H( div)-norm and velocity in L^2-norm. Furthermore, the optimal L^2 error estimate for pseudostress is derived under certain conditions. Finally, numerical experiments are provided to support the theoretical results and to show the robustness, accuracy, and flexibility of the MDG method. 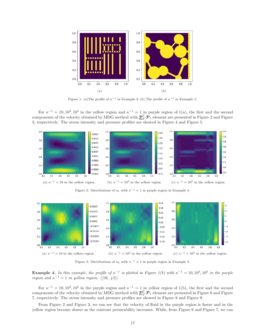 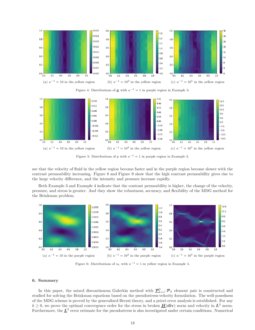 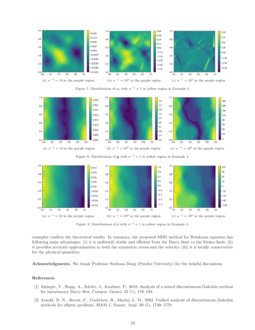 In the context of flow visualization a triple decomposition of the veloc...
Johan Hoffman, et al. ∙

In this paper, we propose a unified numerical framework for the time-dep...
Xi Chen, et al. ∙

with a high-contrast permeability tensor

κ––, can be seen as a mixture of Darcy and Stokes equations. Here, ν>0 is the fluid viscosity, u denotes the velocity field, ε–(u)=(∇––u+(∇––u)t)/2 is the strain rate, p is the pressure field, and f is the volume force. This model arises from applications in many fields, such as groundwater hydrology, biomedical engineering, petroleum industry, and environmental science (cf. Wehrspohn (2005); Ligaarden et al. (2010); Vafai (2010)). From (1.1), we can see that the Brinkman problem becomes Stokes-dominated when the permeability tensor κ–– is getting large, and it becomes Darcy-dominated when κ–– is quite small.

In this paper, we construct a mixed discontinuous Galerkin (MDG) method with P––Sk+1-Pk element pair for solving the Brinkman equations based on the pseudostress-velocity formulation. The main results of this article include that: (i) The MDG scheme with symmetric stress field is uniformly stable and efficient for both Darcy-dominated and Stokes-dominated flows; (ii) Under specific parameter-dependent norms, the parameter-robust stability results of both continuous and discrete schemes are obtained; (iii) For k≥0, we get the optimal convergence order for the stress in broken H––(div)-norm and velocity in L2-norm; (iv) When k≥n and the Stokes pair Pk+2-Pk+1 is stable, we obtain the optimal L––2 error estimate for the pseudostress.

The rest of the paper is organized as follows. In Section 2, we introduce the pseudostress-velocity formulation for the Brinkman model and present some preliminary results. In Section 3, the MDG scheme is introduced and the well-posedness is obtained. We show the stability of the discrete scheme and prove optimal error estimates for both velocity and pressure in Section 4. In Section 5, numerical examples are provided to confirm the theoretical findings and to illustrate the performance of the mixed DG scheme. Finally, we give a short summary in Section 6.

In this section, we introduce the Brinkman model in the pseudostress-velocity formulation and provide the parameter-robust stability analysis of the continuous problem. First, we give the notation.

In the present context, Green’s formula takes the form

where nD is the exterior unit normal to ∂D. If D is chosen as Ω, we abbreviate it by using (⋅,⋅) and ⟨⋅,⋅⟩, and similar rule follows for the spaces and norms mentioned above.

Let Ω⊂Rn be a bounded and simply connected polygonal domain with Lipschitz boundary Γ. In this paper, we consider the permeability of the form κ––=κI–, with the purpose of facilitating parameter-robust stability analysis. We could also take ν=1 by a non-dimensionalization procedure (see Remark 2.1 below). With these simplifications, we find that for the unique solution (u, p) of the Brinkman model (1.1), (σ––, u, p) solves the equations

As a result, we can get the same conclusions with the problem (2.3).

As described in Section 1, in order to keep the strengths and improve the weaknesses of the stress-velocity-pressure formulation, by the incompressible condition, the problem (2.3) can be rewritten equivalently as the pseudostress-velocity formulation (cf. Gatica and Sequeira (2018)):

where the pressure p can be obtained by the postprocessing formula

There are two reasons for eliminating the pressure. An obvious one is to reduce one variable and, hence, many degrees of freedom in the discrete system. A more important reason is that we can use economic and accurate stable elements and develop fast solvers for the resulting discrete system so that computational cost will be greatly reduced.

Here, the bilinear forms are defined by

Notice that, by Green’s formula, the equation (2.6a) contains both the equation 2ε–(u)=σ––d in Ω and the boundary condition u=g, with in particular the incompressibility condition divu=12tr(σ––d)=0.

Furthermore, by the definition of τ––d, it is easy to check that

Throughout the paper, we use the abbreviation x≲y (x≳y) for the inequality x≤Cy (x≥Cy), where the letter C denotes a positive constant independent of the parameters κ, ν, and the mesh size h, and may stand for different values at its different occurrences.

2.3 Well-posedness of the continuous problem

Due to the large variation of the permeability tensor, in order to show that our analysis is independent of the parameters κ, Σ–– and V are endowed with the norm

The bilinear form A(⋅,⋅) satisfies

Next, we show the inf-sup condition of A(⋅,⋅) at continuous level.

Then, we finish this proof. ∎

In this section, we formulate the MDG method for the Brinkman problem in the pseudostress-velocity formulation and show that it has a unique solution.

3.1 Derivation of the MDG scheme

Let {Th}h be a family of quasi-regular decomposition of the domain ¯¯¯¯Ω into triangles (tetrahedrons), hK be the diameter of the element K∈Th and h=max{hK:K∈Th}. We denote the union of the boundaries of all the K∈Th by Eh, Eih is the set of all the interior edges and E∂h=Eh/Eih is the set of boundary edges. Let ∇––h and divh be the broken gradient and divergence operators whose restrictions on each element K∈Th are equal to ∇–– and div, respectively. In addition, given an integer k≥0, we denote by Pk(D) the space of polynomials defined in D of total degree at most k. Recall the notation for vector-valued, tensor-valued and symmetric-tensor-valued function spaces, we have Pk(D)=[Pk(D)]n, P––Mk(D)=[Pk(D)]n×n, and P––Sk(D)={τ––∈[Pk(D)]n×n:τ––t=τ––}. Construct the discontinuous finite element spaces Σ––h and Vh by

The norm of Σ––h is defined by

Then, we approximate σ–– and u by σ––h∈Σ––h and uh∈Vh, respectively, and the trace of σ–– and u on element edge by the numerical fluxes ˆσ––h and ˆuh. Summing on all K∈Th, we get

where the penalty parameter ηe=O(1). For simplicity, we choose ηe=1 in the analysis.

With such choices and symmetry properties of τ––h, the MDG method of the problem (2.4) is to find (σ––h,uh)∈Σ––h×Vh such that