In this paper, we propose an extension of our Mining for SAT framework to Constraint satisfaction Problem (CSP). We consider n-ary extensional constraints (table constraints). Our approach aims to reduce the size of the CSP by exploiting the structure of the constraints graph and of its associated microstructure. More precisely, we apply itemset mining techniques to search for closed frequent itemsets on these two representation. Using Tseitin extension, we rewrite the whole CSP to another compressed CSP equivalent with respect to satisfiability. Our approach contrast with previous proposed approach by Katsirelos and Walsh, as we do not change the structure of the constraints. 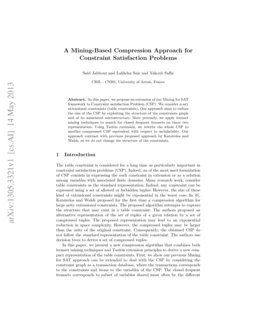 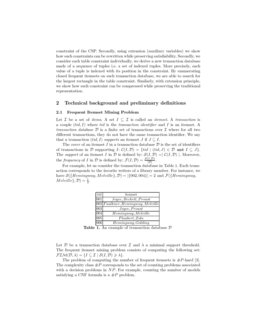 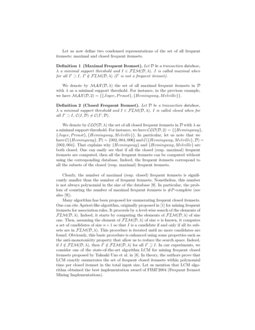 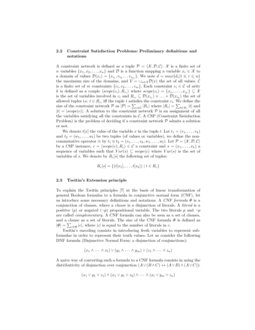 The table constraint is considered for a long time as particularly important in constraint satisfaction problems (CSP). Indeed, on of the most used formulation of CSP consists in expressing the each constraint in extension or as a relation among variables with associated finite domains. Many research work, consider table constraints as the standard representation. Indeed, any constraint can be expressed using a set of allowed or forbidden tuples. However, the size of these kind of extensional constraints might be exponential in the worst case. In [6]

In this paper, we present a new compression algorithm that combines both itemset mining techniques and Tseitin extension principles to derive a new compact representation of the table constraints. First, we show our previous Mining for SAT approach can be extended to deal with the CSP by considering the constraint graph as a transaction database, where the transactions corresponds to the constraints and items to the variables of the CSP. The closed frequent itemsets corresponds to subset of variables shared most often by the different constraint of the CSP. Secondly, using extension (auxiliary variables) we show how such constraints can be rewritten while preserving satisfiability. Secondly, we consider each table constraint individually, we derive a new transaction database made of a sequence of tuples i.e. a set of indexed tuples. More precisely, each value of a tuple is indexed with its position in the constraint. By enumerating closed frequent itemsets on such transaction database, we are able to search for the largest rectangle in the table constraint. Similarly, with extension principle, we show how such constraint can be compressed while preserving the traditional representation.

For example, let us consider the transaction database in Table 1. Each transaction corresponds to the favorite writers of a library member. For instance, we have S({Hemingway,Melville},D)=|{002,004}|=2 and F({Hemingway, Melville},D)=13.

Let D be a transaction database over I and λ a minimal support threshold. The frequent itemset mining problem consists of computing the following set: FIM(D,λ)={I⊆I∣S(I,D)⩾λ}.

The problem of computing the number of frequent itemsets is #P-hard [3]. The complexity class #P corresponds to the set of counting problems associated with a decision problems in NP. For example, counting the number of models satisfying a CNF formula is a #P problem.

Let D be a transaction database, λ a minimal support threshold and I∈FIM(D,λ). I is called maximal when for all I′⊃I, I′∉FIM(D,λ) (I′ is not a frequent itemset).

We denote by MAX(D,λ) the set of all maximal frequent itemsets in D with λ as a minimal support threshold. For instance, in the previous example, we have MAX(D,2)={{Joyce,Proust},{Hemingway,Melville}}.

Let D be a transaction database, λ a minimal support threshold and I∈FIM(D,λ). I is called closed when for all I′⊃I, C(I,D)≠C(I′,D).

Many algorithm has been proposed for enumerating frequent closed itemsets. One can cite Apriori-like algorithm, originally proposed in [1] for mining frequent itemsets for association rules. It proceeds by a level-wise search of the elements of FIM(D,λ). Indeed, it starts by computing the elements of FIM(D,λ) of size one. Then, assuming the element of FIM(D,λ) of size n is known, it computes a set of candidates of size n+1 so that I is a candidate if and only if all its subsets are in FIM(D,λ). This procedure is iterated until no more candidates are found. Obviously, this basic procedure is enhanced using some properties such as the anti-monotonicity property that allow us to reduce the search space. Indeed, if I∉FIM(D,λ), then I′∉FIM(D,λ) for all I′⊇I. In our experiments, we consider one of the state-of-the-art algorithm LCM for mining frequent closed itemsets proposed by Takeaki Uno et al. in [8]. In theory, the authors prove that LCM exactly enumerates the set of frequent closed itemsets within polynomial time per closed itemset in the total input size. Let us mention that LCM algorithm obtained the best implementation award of FIMI’2004 (Frequent Itemset Mining Implementations).

To explain the Tseitin principles [7]

at the basis of linear transformation of general Boolean formulas to a formula in conjunctive normal form (CNF), let us introduce some necessary definitions and notations. A

A naive way of converting such a formula to a CNF formula consists in using the distributivity of disjunction over conjunction (A∨(B∧C)↔(A∨B)∧(A∨C)):

Such a naive approach is clearly exponential in the worst case. In Tseitin’s transformation, fresh propositional variables are introduced to prevent such combinatorial explosion, mainly caused by the distributivity of disjunction over conjunction and vice versa. With additional variables, the obtained CNF formula is linear in the size of the original formula. However the equivalence is only preserved w.r.t satisfiability:

We describe the transactions database that we associate to a given constraints network. It is obtained by considering the set of variables as a set of items.

Let P=⟨X,D,C⟩ be a constraints network. The transactions database associated to P, denoted TDP, is defined over the set of items X as follows:

We provide a rewriting rule for reducing the size of a constraints network. It is mainly based on introducing new variables using Tseitin extension principle.

Let P=⟨X,D,C⟩ be a constraints network, s=(x1,…,xk) a tuple of variables and {c1,c2,…,cn}⊆C a subset of n constraints of C such that V(s)⊆scope(ci) for 1⩽i⩽n. In order to rewrite P, we introduce a new variable y∉X and a set N of l new values such that V∩N=∅ and l=|⋂ni=1Rci[s]|. Let f be a bijection from ⋂ni=1Rci[s] to N. We denote by Pg the constraint network ⟨Xg,Dg,Cg⟩ obtained by rewriting P with respect to s and f:

As pairwise consistency deletes tuples from a constraint relation, some values can be eliminated when they have lost all their supports. Consequently, domains can be filtered if generalized arc consistency (GAC) is applied in a second step.

As a side effect, our CGR rewriting rule maintains some weak form of PWC. Indeed, in Definition 4, when a sub-tuple t[s]∉⋂nj=1Rcj[s], the tuple t is then deleted and do not belong to the new constraint c′i.

In this simple example, using one additional variable, we reduce the size of the constraint network from |P|=18 to |Pg|=16. As we can observe, the value b can be eliminated by GAC from the domain of x1.

Let P=⟨X,D,C⟩ be a constraints network, and s=(x1,…,xn)⊆X be a sub-tuple of variables corresponding to a frequent itemset Is of Pg where the minimal support threshold is greater or equal to k. Let {c1,…,ck}⊆C be the set of constraints such that s⊆scope(ci) for 1⩽i⩽k. Suppose that the constraints network P is pairwise consistent, in such a case, all the relations associated to each ci for 1⩽i⩽k contain the same number p of tuples. Under such worst case hypothesis, the size of P can be reduced by at least r=(n×p×k−(p×k+n×p+p). Let us consider again the example 1. The reduction is at least r=(2×3×2)−(3×2+2×3+3)=12−15=−3. If we consider, the tuple (b,a,b)∈Rc1 eliminated by the application of the CGR rule. This results in subtracting 5 from the second term of r. Consequently, we obtain a reduction of 2.

Regarding the value of k, one can see that the compression is interesting when r>0 i.e. k>n+1n−1. Indeed, if n<2 then there is no reduction. Thus, there are three cases : if n=2, then k⩾4, else if n=3 then k⩾3, k⩾2 otherwise. Therefore, the constraint network is always reduced when k⩾4. We obtain exactly the same condition as in our mining based compression approach of Propositional CNF formula [4]. This is not surprising, as CGR rule is an extension of our Mining4SAT approach [4] to CSP.

Given a constraint network P, we first search for closed frequent itemsets (set of variables) on TDP and then we apply the above rewriting rule on the constraint network using the discovered itemsets of variables. For more details on our algorithm, we refer the reader to the Mining4SAT greedy algorithm [4], where the overlap notion between itemsets are considered. The general compression problem can be stated as follows: given a set of frequent closed itemsets (sub-sequence of variables) and a constraints network, the question is to find an ordered sequence of operations (application of the CGR rule) leading to a CSP of minimal size.

Obviously, a table constraint c can be translated in a naive way to a transaction database TDc. Indeed, one can define the set of items as the union of the domains of the variables in the scope of c (I=∪x∈scope(c)D(x)) and a transaction (tid,t) as the set of values involved in the tuple t∈Rc. This naive representation is difficult to exploit in our context. Let I={a,b,c} be a frequent itemset of TDc. As the variables in each transaction (or tuple) associated to the values in I are different, it is difficult to compress the the constraint while using both classical tuples and compressed tuples [6]. To overcome this difficulty, we consider tuples as sequence, where each value is indexed by its position in the tuple.

Let P=⟨X,D,C⟩ be a constraint network, and ci∈C a table constraint such that scope(ci)=(xi1,xi2,…,xini). Let t∈Rci a tuple of ci. We define indexed(t)=(t[xi1]1,t[xi2]2,…,t[xini]ni) as an indexed tuple associated to t i.e. each value of the tuple is indexed with its position in the tuple.

Let P=⟨X,D,C⟩ be a constraints network, and c∈C a table constraint where scope(c)={x1,…,xn}. The transaction database associated to c, denoted TDc, is defined over the set of items I=⋃t∈Rc{t[x1]1,…,t[xn]n} as follows:

We now provide a rewriting rule for reducing the size of a table constraint.

Let P=⟨X,D,C⟩ be a constraints network and c∈C be a table constraint with scope(c)={x1,x2,…xn} and |Rc|=m. Let I={vi11,…,vikk} be an itemset of TDc and Y=vars(index(I))={xi1,…,xik}. In order to rewrite c using I, we introduce a new variable z∉X and a set N of l new values such that V∩N=∅ and l=|⋃t∈Rct[Y]|. Let f be a bijection from ⋃t∈Rct[Y] to N. We denote by Pm the constraints network ⟨Xm,Dm,Cm⟩ obtained by rewriting c with respect to I and f:

Let us consider again the example 2. Applying the MR rewriting rule to c with respect to I={b2,a4}, and f where f((b,a))=c1 and f((a,b))=c2, we obtain the following two constraints:

It is easy to see that in example 3, applying MRR rule leads to a constraint of greater size. In what follows, we introduce a necessary and sufficient condition for reducing the size of the table constraint.

3.2.4 Compression algorithm of a table constraint:

In this paper, we propose a data-mining approach, called Mining4CSP, for reducing the size of constraints satisfaction problems when constraints are represented in extension. It can be seen as a preprocessing step that aims to discover hidden structural knowledge that are used to decrease the size of table constraints. Mining4CSP combines both frequent itemset mining techniques for discovering interesting substructures, and Tseitin-based approach for a compact representation of Table constraints using these substructures. Our approach is able to compact a CSP by considering both its associated constraint graph and microstructure. This allows us to define a two step algorithm. The first step, named coarse-grained compression, allows to compact the constraint graph using patterns representing subsets of variables. The second step, named fine-grained compression allows us to compact a given set of tuples of a given table constraint using patterns representing subset of values. Finally, an experimental evaluation on CSP instances is short term perspective.