A Matrix Approach for Weighted Argumentation Frameworks: a Preliminary Report

The assignment of weights to attacks in a classical Argumentation Framework allows to compute semantics by taking into account the different importance of each argument. We represent a Weighted Argumentation Framework by a non-binary matrix, and we characterize the basic extensions (such as w-admissible, w- stable, w-complete) by analysing sub-blocks of this matrix. Also, we show how to reduce the matrix into another one of smaller size, that is equivalent to the original one for the determination of extensions. Furthermore, we provide two algorithms that allow to build incrementally w-grounded and w-preferred extensions starting from a w-admissible extension. 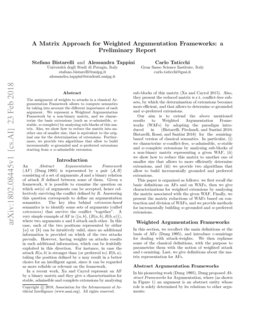 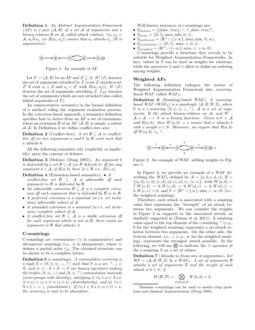 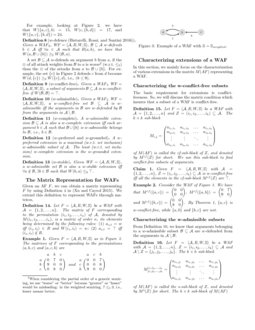 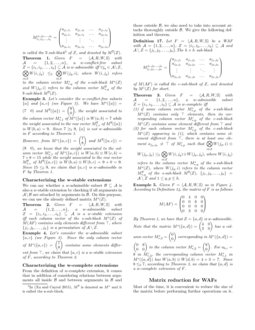 A matrix approach for computing extensions of argumentation frameworks

The matrices and their sub-blocks are introduced into the study of deter...
Xu Yuming, et al. ∙

On the preferred extensions of argumentation frameworks: bijections with naive extensions

This paper deals with the problem of finding the preferred extensions of...
Mohammed Elaroussi, et al. ∙

On Concise Encodings of Preferred Extensions

ConArg is a Constraint Programming-based tool that can be used to model ...
Stefano Bistarelli, et al. ∙

In this paper, we explore the issue of inconsistency handling over prior...
Meghyn Bienvenu, et al. ∙

An Abstract Argumentation Framework (AF) [dung] is represented by a pair ⟨A,R⟩ consisting of a set of arguments A and a binary relation of attack R defined between some of them. Given a framework, it is possible to examine the question on which set(s) of arguments can be accepted, hence collectively surviving the conflict defined by R. Answering this question corresponds to define an argumentation semantics. The key idea behind extension-based semantics is to identify some sets of arguments (called extensions) that survive the conflict “together”. A very simple example of AF is ⟨{a,b},{R(a,b),R(b,a)}⟩, where two arguments a and b attack each other. In this case, each of the two positions represented by either {a} or {b} can be intuitively valid, since no additional information is provided on which of the two attacks prevails. However, having weights on attacks results in such additional information, which can be fruitfully exploited in this direction. For instance, in case the attack R(a,b) is stronger than (or preferred to) R(b,a), taking the position defined by a may result in a better choice for an intelligent agent, since it can be regarded as more reliable or relevant on the framework.

In a recent work, Xu and Cayrol represent an AF by a binary matrix and they give a characterization for stable, admissible and complete extensions by analysing sub-blocks of this matrix [xu15]. Also, they present the reduced matrix w.r.t. conflict-free subsets, by which the determination of extensions becomes more efficient, and that allows to determine w-grounded and w-preferred extensions.

Our aim is to extend the above mentioned results to Weighted Argumentation Frameworks (WAFs) by adopting the paradigm introduced in [DBLP:conf/cilc/BistarelliPS10, DBLP:conf/flairs/BistarelliRS16] for the semiring-based version of classical semantics. In particular, (i) we characterize w-conflict-free, w-admissible, w-stable and w-complete extensions by analysing sub-blocks of a non-binary matrix representing a given WAF, (ii) we show how to reduce this matrix to another one of smaller size that allows to more efficiently determine extensions, and (iii) we provide two algorithms that allow to build incrementally grounded and preferred extensions.

This paper is organized as follows: we first recall the basic definitions on AFs and on WAFs, then we give characterizations for weighted extensions by analysing the matrix associated with the given WAF. Finally, we present the matrix reductions of WAFs based on contraction and division of WAFs, and we provide methods for incrementally building w-grounded and w-preferred extensions.

In this section, we recollect the main definitions at the basis of AFs [dung], and introduce c-semirings for dealing with attack-weights. We then rephrase some of the classical definitions, with the purpose to parametrise them with the notion of weighted attack and c-semiring. Last, we give definitions about the matrix representation for AFs.

In his pioneering work [dung], Dung proposed Abstract Frameworks for Argumentation, where (as shown in Figure 1) an argument is an abstract entity whose role is solely determined by its relations to other arguments:

An Abstract Argumentation Framework (AF) is a pair ⟨A,R⟩ of a set A of arguments and a binary relation R on A, called attack relation. ∀ai,aj∈A, aiRaj (or R(ai,aj)) means that ai attacks aj (R is asymmetric).

An argumentation semantics is the formal definition of a method ruling the argument evaluation process. In the extension-based approach, a semantics definition specifies how to derive from an AF a set of extensions, where an extension B of an AF ⟨A,R⟩ is simply a subset of A. In Definition 2 we define conflict-free sets:

A set B⊆A is conflict-free iff no two arguments a and b in B exist such that a attacks b.

All the following semantics rely (explicitly or implicitly) upon the concept of defence:

C-semirings are commutative (⊗ is commutative) and idempotent semirings (i.e., ⊕ is idempotent), where ⊕ defines a partial order ≤S. The obtained structure can be shown to be a complete lattice.

Well-known instances of c-semirings are:

C-semirings provide a structure that reveals to be suitable for Weighted Argumentation Frameworks. In fact, values in S can be used as weights for relations, while the operators ⊕ and ⊗ allow to define an ordering among weights.

Therefore, each attack is associated with a semiring value that represents the “strength” of an attack between two arguments. We can consider the weights in Figure 2 as supports to the associated attack, as similarly suggested in [DBLP:journals/ai/DunneHMPW11]. A semiring value equal to the top element of the c-semiring ⊤ (e.g., 0 for the weighted semiring) represents a no-attack relation between two arguments. On the other side, the bottom element, i.e., ⊥ (e.g., ∞ for the weighted semiring), represents the strongest attack possible. In the following, we will use ⨂ to indicate the ⊗ operator of the c-semiring S on a set of values:

3 The Matrix Representation for WAFs

Given an AF F, we can obtain a matrix representing F by using Definition 4 in [xu15]. We extend this definition to represent WAFs through matrices.

Given F=⟨A,R,W,S⟩ as in Figure 3. The matrices of F corresponding to the permutations (a,b,c) and (a,c,b) are

4 Characterizing extensions of a WAF

In this section, we mainly focus on the characterization of various extensions in the matrix M(AF) representing a WAF.

of M(AF) is called the cf-sub-block of Z, and denoted by Mcf(Z) for short. We use this sub-block to find conflict-free subsets of arguments.

refers to the column vector

We can say whether a w-admissible subset B⊆A is also a w-stable extension by checking if all arguments in A∖B are attacked by arguments in B. On this purpose, we can use the already defined matrix Ms(Z).

Let’s consider the w-admissible subset {a,c} (see Figure 3). Since the only column vector of Ms({a,c})=(78) contains some elements different from ⊤, we claim that {a,c} is a w-stable extension of F, according to Theorem 2.

Given F=⟨A,R,W,S⟩ as in Figure 4. According to Definition 14, the matrix of F is as follows

Most of the time, it is convenient to reduce the size of the matrix before performing further operations on it. Below, we provide a method to contract the w-conflict-free subset of a matrix into a single entity, without affecting the computation of the extensions. Moreover, we show an iterative procedure for building w-grounded and w-preferred extensions.

Starting from a conflict-free sub-block, we can characterize w-admissible, w-stable and w-complete extensions of a WAF. Contracting such a sub-block, we obtain a new matrix of smaller size, but with the same semantics status as the original one.

For a w-conflict-free subset Z=i1,i2,…,ik, we can contract the sub-block Mcf(Z) into a single entry in the matrix. This new entry will have the same status as Mcf(Z) w.r.t. the extension-based semantics. Thus the matrix M(AF) can be reduced into another matrix MrZ(AF) with order n−k+1 by applying the following rules: let 1≤t≤k, for each s such that 1≤s≤k and s≠t,

Let RrZ denote the new relation and ArZ={it}∪(A∖Z), then (ArZ,RrZ) is a new AF called the reduced AF w.r.t. Z. Obviously, the reduced matrix MrZ(AF) is exactly the matrix obtained from ArZ and RrZ.

Let F=⟨A,R,W,S⟩ be a WAF. The w-grounded extension of F can be viewed as the union of two subsets IAF and E: IAF consists of the initial arguments of F and E is the w-grounded extension, w-defended by F, of the remaining sub-AF w.r.t. IAF (that is F∣B, where B=A∖(IAF∪R+(IAF))). On the other hand, a w-preferred extension coincides with an admissible extension E, w-defended by F, from which the associated remaining sub-AF F∣C (where C=A∖(E∪R+(E))) has no nonempty admissible extension. We have the following theorem.

This process can be done repeatedly until, for some t, Et=∅, where 2≤t≤n. From Theorem 5, we know that the set union between w-admissible extensions is a w-admissible extension in turn. At this point, the set Z=I1∪E2∪⋯∪Et−1 is the w-grounded extension of F. Note that the set Bi coincides with the set of undec arguments in the labelling of Bi−1 where Ii is the set of in arguments.

This process can be done repeatedly until, for some t, Et=∅, where 2≤t≤n. At this point, by Theorem 5, the set Z=Z1∪E2∪⋯∪Et−1 is the w-preferred extension of F.

Computational Complexity. We analysed the above described algorithms from the computational point of view. The first algorithm, which computes w-grounded extensions, has an overall time complexity of O(n4). The algorithm for w-preferred extensions reveals worse performance than the first one, with a time complexity of O(2n⋅n5). This is due to the fact that an admissible extension has to be found at each execution of step 3. A more extended study of the complexity is left for future work.

In this work, we introduce a matrix approach for studying extensions of semiring-based semantics. A WAF is represented as a matrix in which all elements correspond to weights assigned to relations among arguments. In particular, by extracting sub-blocks from this matrix, it is possible to check if a set of arguments is an extension for some semantics. Also, we describe an incremental procedure for building w-grounded and w-preferred extensions and we study how to reduce the number of arguments of a WAF in order to obtain a contracted matrix with the same status as the original one (w.r.t. the semantics). A possible application for this approach could be the identification of equational representation of semiring-based extensions, by using the method proposed in [DBLP:conf/ecsqaru/Gabbay11]. We plan to extend our current implementation444http://www.dmi.unipg.it/conarg [DBLP:conf/ictai/BistarelliS11, DBLP:conf/tafa/BistarelliS11] with the proposed approaches, and to test their performance on real applications. Finally, we would like to investigate whether such methodologies can be applied when considering coalitions of arguments [DBLP:journals/fuin/BistarelliS13].