This work provides a simplified proof of the statistical minimax optimality of (iterate averaged) stochastic gradient descent (SGD), for the special case of least squares. This result is obtained by analyzing SGD as a stochastic process and by sharply characterizing the stationary covariance matrix of this process. The finite rate optimality characterization captures the constant factors and addresses model mis-specification. 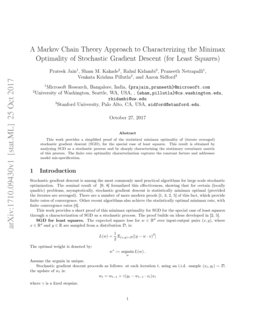 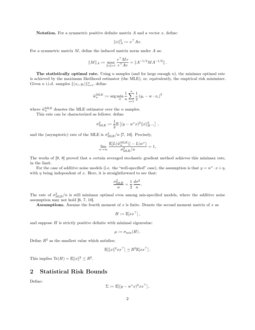 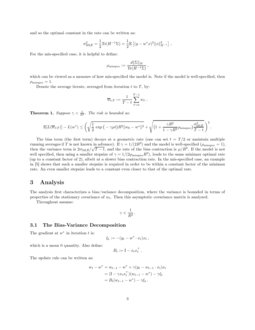 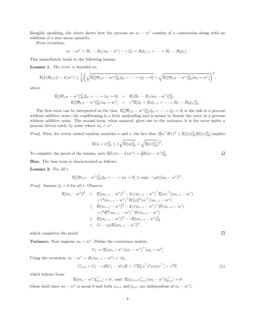 Stochastic gradient descent is among the most commonly used practical algorithms for large scale stochastic optimization. The seminal result of  [9, 8] formalized this effectiveness, showing that for certain (locally quadric) problems, asymptotically, stochastic gradient descent is statistically minimax optimal (provided the iterates are averaged). There are a number of more modern proofs [1, 3, 2, 5] of this fact, which provide finite rates of convergence. Other recent algorithms also achieve the statistically optimal minimax rate, with finite convergence rates [4].

This work provides a short proof of this minimax optimality for SGD for the special case of least squares through a characterization of SGD as a stochastic process. The proof builds on ideas developed in [2, 5].

SGD for least squares. The expected square loss for w∈Rd over input-output pairs (x,y), where x∈Rd and y∈R are sampled from a distribution D, is:

The optimal weight is denoted by:

Assume the argmin in unique.

Stochastic gradient descent proceeds as follows: at each iteration t, using an i.i.d. sample (xt,yt)∼D, the update of wt is:

where γ is a fixed stepsize.

Notation. For a symmetric positive definite matrix A

For a symmetric matrix M, define the induced matrix norm under A as:

), the minimax optimal rate is achieved by the maximum likelihood estimator (the MLE), or, equivalently, the empirical risk minimizer. Given

where ˆwMLEn denotes the MLE estimator over the n samples.

This rate can be characterized as follows: define

The works of [9, 8] proved that a certain averaged stochastic gradient method achieves this minimax rate, in the limit.

For the case of additive noise models (i.e. the “well-specified” case), the assumption is that y=w∗⋅x+η, with η being independent of x. Here, it is straightforward to see that:

The rate of σ2MLE/n is still minimax optimal even among mis-specified models, where the additive noise assumption may not hold [6, 7, 10].

Assume the fourth moment of

x is finite. Denote the second moment matrix of x as

Define R2 as the smallest value which satisfies:

and so the optimal constant in the rate can be written as:

For the mis-specified case, it is helpful to define:

which can be viewed as a measure of how mis-specified the model is. Note if the model is well-specified, then ρmisspec=1.

Denote the average iterate, averaged from iteration t to T, by:

Suppose γ<1R2. The risk is bounded as:

The bias term (the first term) decays at a geometric rate (one can set t=T/2 or maintain multiple running averages if T is not known in advance). If γ=1/(2R2) and the model is well-specified (ρmisspec=1

), then the variance term is

The analysis first characterizes a bias/variance decomposition, where the variance is bounded in terms of properties of the stationary covariance of wt. Then this asymptotic covariance matrix is analyzed.

The gradient at w∗ in iteration t is:

which is a mean 0 quantity. Also define:

The update rule can be written as:

Roughly speaking, the above shows how the process on wt−w∗ consists of a contraction along with an addition of a zero mean quantity.

It is helpful to consider a certain bias and variance decomposition. Let us write:

(The first conditional expectation notation slightly abuses notation, and should be taken as a definition111The abuse is due that the right hand side drops the conditioning.).

The error is bounded as:

Bias. The bias term is characterized as follows:

Assume ξt=0 for all t. Observe:

Suppose w0=w∗. There exists a unique C∞ such that:

Using that ξt is mean zero and independent of Bt′ and ξt′ for t<t′,

To prove the limit exists, it suffices to first argue the trace of Ct is uniformly bounded from above, for all t. By taking the trace of update rule, Equation 2, for Ct,

proving the uniform boundedness of the trace of Ct. Now, for any fixed v, the limit of v⊤Ctv exists, by the monotone convergence theorem. From this, it follows that every entry of the matrix Ct converges. ∎

Notice that H(I−γH)τ=(I−γH)τH for any non-negative integer τ. Since H≻0 and I−γH⪰0, H(I−γH)τ⪰0 because the product of two commuting PSD matrices is PSD. Also note that for PSD matrices A,B, TrAB≥0. Hence,

from lemma 3 where (∗) followed from

and the series converges because I−γH≺I. ∎

Define two linear operators on symmetric matrices, S and T — where S and T can be viewed as matrices acting on (d+12) dimensions — as follows:

With this, C∞ is the solution to:

The inverse of this operator can be written as:

which exists since the sum converges due to fact that 0⪯I−γH≺I.

A few inequalities are helpful: If 0⪯M⪯M′, then

The following inequality is also of use:

By definition of ˜T,

Using this and Equation 6,

From Lemma 5 and Equation 7,

Multiplying this by H−1 and taking the trace leads to:

3.3 Completing the proof of Theorem 1

The proof of the theorem is completed by applying the developed lemmas. For the bias term, using convexity leads to:

For the variance term, observe that