For their famous algorithm for the disjoint paths problem, Robertson and Seymour proved that there is a function f such that if the tree-width of a graph G with k pairs of terminals is at least f(k), then G contains a solution-irrelevant vertex (Graph Minors. XXII., JCTB 2012). We give a single-exponential lower bound on f. This bound even holds for planar graphs. 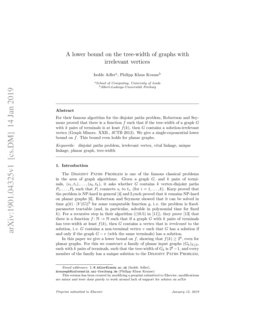 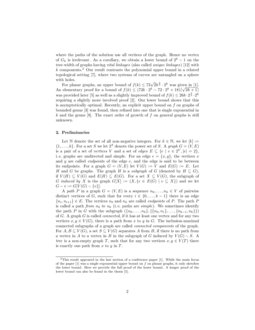 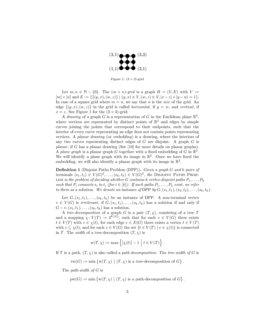 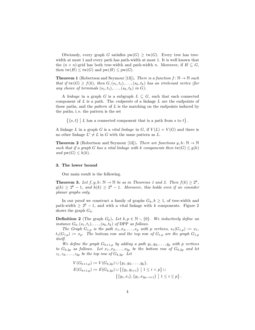 Bounds for the Twin-width of Graphs

The Disjoint Paths problem asks whether a fixed number of pairs of termi...
Petr A. Golovach, et al. ∙

A Tight Lower Bound for Edge-Disjoint Paths on Planar DAGs

We show that any planar drawing of a forest of three stars whose vertice...
Emilio Di Giacomo, et al. ∙

Tensor networks have been an important concept and technique in many res...
Liu Ying, et al. ∙

The Disjoint Paths Problem is one of the famous classical problems in the area of graph algorithms. Given a graph G, and k pairs of terminals, (s1,t1),…,(sk,tk), it asks whether G contains k vertex-disjoint paths P1,…,Pk such that Pi connects si to ti, (for i=1,…,k). Karp proved that the problem is NP-hard in general Karp75 and Lynch proved that it remains NP-hard on planar graphs Lynch75 . Robertson and Seymour showed that it can be solved in time g(k)⋅|V(G)|3 for some computable function g, i. e. the problem is fixed-parameter tractable (and, in particular, solvable in polynomial time for fixed k). For a recursive step in their algorithm ((10.5) in GMXIII ), they prove GMXXII that there is a function f:N→N such that if a graph G with k pairs of terminals has tree-width at least f(k), then G contains a vertex that is irrelevant to the solution, i. e. G contains a non-terminal vertex v such that G has a solution if and only if the graph G−v (with the same terminals) has a solution.

In this paper we give a lower bound on f, showing that f(k)≥2k, even for planar graphs. For this we construct a family of planar input graphs (Gk)k≥2, each with k pairs of terminals, such that the tree-width of Gk is 2k−1, and every member of the family has a unique solution to the Disjoint Paths Problem, where the paths of the solution use all vertices of the graph. Hence no vertex of Gk is irrelevant. As a corollary, we obtain a lower bound of 2k−1 on the tree-width of graphs having vital linkages (also called unique linkages) GMXXI with k components.222This result appeared in the last section of a conference paper AdlerKKLST11 . While the main focus of the paper AdlerKKLST11 was a single exponential upper bound on f on planar graphs, it only sketches the lower bound. Here we provide the full proof of the lower bound. A longer proof of the lower bound can also be found in the thesis Krause2016 . Our result contrasts the polynomial upper bound in a related topological setting Matousek2016 , where two systems of curves are untangled on a sphere with holes.

For planar graphs, an upper bound of f(k)≤72√2k32⋅2k was given in AdlerKKLST11 . An elementary proof for a bound of f(k)≤(72k⋅2k−72⋅2k+18)⌈√2k+1⌉ was provided later Krause2016 as well as a slightly improved bound of f(k)≤26k⋅232⋅2k requiring a slightly more involved proof AdlerKKLST17 . Our lower bound shows that this is asymptotically optimal. Recently, an explicit upper bound on f on graphs of bounded genus GeelenHR18 was found, then refined into one that is single exponential in k and the genus Mazoit13 . The exact order of growth of f on general graphs is still unknown.

A path P in a graph G=(V,E) is a sequence n0,…,nk∈V of pairwise distinct vertices of G, such that for every i∈{0,…,k−1} there is an edge {ni,ni+1}∈E. The vertices n0 and nk are called endpoints of P. The path P is called a path from n0 to nk (i. e. paths are simple). We sometimes identify the path P in G with the subgraph ({n0,…,nk},{{n0,n1},…,{nk−1,nk}}) of G. A graph G is called connected, if it has at least one vertex and for any two vertices x,y∈V(G), there is a path from x to y in G. The inclusion-maximal connected subgraphs of a graph are called connected components of the graph. For A,B⊆V(G), a set S⊆V(G) separates A from B, if there is no path from a vertex in A to a vertex in B in the subgraph of G induced by V(G)∖S. A tree is a non-empty graph T, such that for any two vertices x,y∈V(T) there is exactly one path from x to y in T.

A drawing of a graph G is a representation of G in the Euclidean plane R2, where vertices are represented by distinct points of R2 and edges by simple curves joining the points that correspond to their endpoints, such that the interior of every curve representing an edge does not contain points representing vertices. A planar drawing (or embedding) is a drawing, where the interiors of any two curves representing distinct edges of G are disjoint. A graph G is planar, if G has a planar drawing (See MoharTh01 for more details on planar graphs). A plane graph is a planar graph G together with a fixed embedding of G in R2. We will identify a plane graph with its image in R2. Once we have fixed the embedding, we will also identify a planar graph with its image in R2.

If T is a path, (T,χ) is also called a path-decomposition. The tree-width of G is

The path-width of G is

A linkage L in a graph G is a vital linkage in G, if V(L)=V(G) and there is no other linkage L′≠L in G with the same pattern as L.

There are functions g,h:N→N such that if a graph G has a vital linkage with k components then tw(G)≤g(k) and pw(G)≤h(k).

Our main result is the following.

In our proof we construct a family of graphs Gk,k≥1, of tree-width and path-width ≥2k−1, and with a vital linkage with k components. Figure 2 shows the graph G4.

By construction, the graph Gk contains a linkage (because in each step we add a path linking a new terminal pair).

We will now show that this linkage is vital by considering a topological version.

Given a subset X of the plane and k pairs of terminals (s1,t1)∈X2,…,(sk,tk)∈X2 the topological Disjoint Paths Problem is the problem of deciding whether there are k pairwise disjoint curves in X, such that each curve Pi is homeomorphic to [0,1] and its ends are si and ti. If such curves P1,…,Pk exist, we refer to them as a solution. We denote an instance of the topological Disjoint Paths Problem by X,(s1,t1),(s2,t2),…,(sk,tk).

A disc-with-edges is a subset X of the plane containing a closed disc D such that the connected components of X∖D, called edges, are homeomorphic to open intervals (0,1). We now define a family (Xk)k∈N∖{0} of discs-with-edges together with terminals. These will be used as instances of the topological DPP. Figure 4 illustrates the construction.

For an instance of the topological DPP on X4, this solution can be seen in Figure 5.

For k=1 this is true because E1=∅. Inductively assume that the lemma holds for k. Let P1,…,Pk+1 be any solution to Xk+1,(s1,t1),…, (sk+1,tk+1). This solution induces a solution of the topological DPP Xk,(s1,t1), …, (sk,tk) as follows. Every edge e∈Ek+1 together with the segment of ∂D that connects the ends of e and contains tk+1 bounds a disc De. The space X′k:=Xk+1∪⋃e∈Ek+1De is homeomorphic to Xk and the paths P1,…,Pk form a solution of X′k, (s1,t1), …, (sk,tk). Figure 6 illustrates this for k=3. By induction, this solution is unique up to homeomorphism and the paths P1,…,Pk use all edges in ⋃1≤i≤kEi. Let Q1,…,Qk be the solution obtained by embedding the graph Gk (cf. Remark 3). By uniqueness, for each i∈[k], the edges of ⋃1≤i≤kEi used by Pi are the same as for Qi, and the order of their appearance on Pi when walking from si to ti is also the same as on Qi. Hence the solution P1,…,Pk on X′k restricted to the closed disc D of X′k is a planar matching of curves (the curves in ⋃1≤i≤kPi∖⋃1≤i≤kEi) between pairs of points on ∂D (and the same pairs of points are obtained by restricting Q1,…,Qk to D). These pairs of points also have to be matched in Xk+1.

that avoids all edges in Ek+1. Since the edges of ⋃1≤i≤kEi are already used, p is routed within D. By construction of Xk+1 and the fact that all edges of ⋃1≤i≤kEi are already used, this means that p separates sk+1 from both tk+1 and the endpoints of the edges in Ek+1, a contradiction to Pk+1 being a path in the solution. Hence p uses an edge of Ek+1.

Since the sets ⋃1≤i≤kPi∖⋃1≤i≤kEi and Ek+1 have equal size, it follows that each curve of the matching

Let P1,…,Pk be the linkage from Remark 2. We argue that it is vital. For k=1 and k=2, one can easily verify that Gk has a unique embedding. For k≥2, contracting an edge at s1 suffices to make Gk 3-connected. Since 3-connected planar graphs have unique embeddings Whitney1932 , the graph Gk also has a unique embedding, and it suffices to consider our previous embedding of Gk (cf. Figure 2). Let D be the minimal disc containing the grid in Gk. The disc D together with E(Gk) is the space Xk. The paths P1,…,Pk thus give a solution to the topological DPP instance Xk,(s1,t1),…,(sk,tk), which by Lemma 1 is unique and uses all edges in Ek. Thus any linkage P′1,…,P′k with the same pattern as P1,…,Pk can differ from P1,…,Pk only inside the grid. Thus for each y∈[2k−1] there is a subpath Q′y of some path of the solution P′1,…,P′k, such that the endpoints of Q′y are (y′,1) and (y,2k−1) for some y′∈[2k−1]. Hence the family (Q′y)y∈[2k−1] is a linkage between the first column and the last column of the grid.

Suppose that P′1,…,P′k indeed differs from P1,…,Pk. Then at least one path Q′y contains a vertical edge e in the grid. Hence the column of e contains at most 2k−3 vertices that are not used by Q′y and, by Menger’s Theorem Menger1927 , the remaining 2k−2 paths of the family cannot be routed, a contradiction.