Parameter-dependent discretizations of linear fluid-structure interaction problems can be approached with low-rank methods. When discretizing with respect to a set of parameters, the resulting equations can be translated to a matrix equation since all operators involved are linear. If nonlinear FSI problems are considered, a direct translation to a matrix equation is not possible. We present a method that splits the parameter set into disjoint subsets and, on each subset, computes an approximation of the problem related to the upper median parameter by means of the Newton iteration. This approximation is then used as initial guess for one Newton step on a subset of problems. 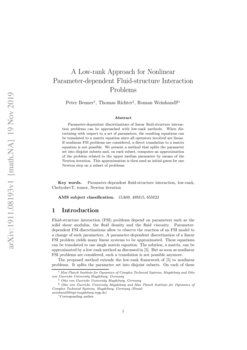 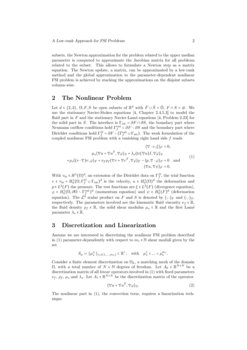 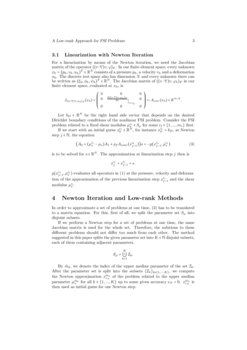 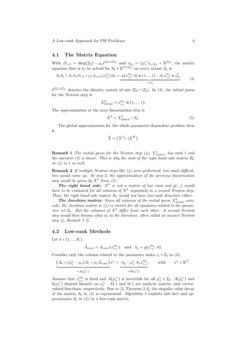 Differential algebraic Riccati equations are at the heart of many applic...
Tobias Breiten, et al. ∙

A parameter-dependent smoother for the multigrid method

A pathwise parameterisation for stochastic transport

In this work we set the stage for a new probabilistic pathwise approach ...
Oana Lang, et al. ∙

Fluid-structure interaction (FSI) problems depend on parameters such as the solid shear modulus, the fluid density and the fluid viscosity. Parameter-dependent FSI discretizations allow to observe the reaction of an FSI model to a change of such parameters. A parameter-dependent discretization of a linear FSI problem yields many linear systems to be approximated. These equations can be translated to one single matrix equation. The solution, a matrix, can be approximated by a low-rank method as discussed in [5]. But as soon as nonlinear FSI problems are considered, such a translation is not possible anymore.

The proposed method extends the low-rank framework of [5] to nonlinear problems. It splits the parameter set into disjoint subsets. On each of these subsets, the Newton approximation for the problem related to the upper median parameter is computed to approximate the Jacobian matrix for all problems related to the subset. This allows to formulate a Newton step as a matrix equation. The Newton update, a matrix, can be approximated by a low-rank method and the global approximation to the parameter-dependent nonlinear FSI problem is achieved by stacking the approximations on the disjoint subsets column-wise.

Let d∈{2,3}, Ω,F,S be open subsets of Rd with ¯F∪¯S=¯Ω, F∩S=∅. We use the stationary Navier-Stokes equations [4, Chapter 2.4.5.3] to model the fluid part in F and the stationary Navier-Lamé equations [4, Problem 2.23] for the solid part in S. The interface is Γint=∂F∩∂S, the boundary part where Neumann outflow conditions hold Γoutf⊂∂F∖∂S and the boundary part where Dirichlet conditions hold ΓDf=∂F∖(Γoutf∪Γ% int). The weak formulation of the coupled nonlinear FSI problem with a vanishing right hand side f reads

With vin∈H1(Ω)d, an extension of the Dirichlet data on ΓDf, the trial function v∈vin+H10(Ω,ΓDf∪Γint)d is the velocity, u∈H10(Ω)d the deformation and p∈L2(F) the pressure. The test functions are ξ∈L2(F) (divergence equation), φ∈H10(Ω,∂Ω∖Γoutf)d (momentum equation) and ψ∈H10(F)d (deformation equation). The L2 scalar product on F and S is denoted by ⟨⋅,⋅⟩F and ⟨⋅,⋅⟩S, respectively. The parameters involved are the kinematic fluid viscosity νf∈R, the fluid density ρf∈R, the solid shear modulus μs∈R and the first Lamé parameter λs∈R.

The nonlinear part in (1), the convection term, requires a linearization technique.

For a linearization by means of the Newton iteration, we need the Jacobian matrix of the operator ⟨(v⋅∇)v,φ⟩F. In our finite element space, every unknown xh=(ph,vh,uh)T∈RN consists of a pressure ph, a velocity vh and a deformation uh. The discrete test space also has dimension N and every unknown there can be written as (ξh,ϕh,ψh)T∈RN. The Jacobian matrix of ⟨(v⋅∇)v,φh⟩F in our finite element space, evaluated at xh, is

be the right hand side vector that depends on the desired Dirichlet boundary conditions of the nonlinear FSI problem. Consider the FSI problem related to a fixed shear modulus

If we start with an initial guess xi10∈RN, for instance xi10=bD, at Newton step j∈N, the equation

is to be solved for s∈RN. The approximation at linearization step j then is

g(xi1j−1,μi1s) evaluates all operators in (1) at the pressure, velocity and deformation of the approximation of the previous linearization step xi1j−1 and the shear modulus μi1s.

In order to approximate a set of problems at one time, (3) has to be translated to a matrix equation. For this, first of all, we split the parameter set Sμ into disjoint subsets.

If we perform a Newton step for a set of problems at one time, the same Jacobian matrix is used for the whole set. Therefore, the solutions to these different problems should not differ too much from each other. The method suggested in this paper splits the given parameter set into K∈N disjoint subsets, each of them containing adjacent parameters.

The approximation at the next linearization step is

The global approximation for the whole parameter-dependent problem then is

The initial guess for the Newton step (4), Xkinitial, has rank 1 and the operator (2) is linear. This is why the rank of the right hand side matrix Bk in (4) is 1 as well.

If multiple Newton steps like (4) were performed, two main difficulties would come up. At step 2, the approximation of the previous linearization step would be given by Xk from (5).

The right hand side: Xk is not a matrix of low rank and g(⋅,⋅) would have to be evaluated for all columns of Xk separately in a second Newton step. Thus, the right hand side matrix Bk would not have low-rank structure either.

The Jacobian matrix: Since all columns of the initial guess Xkinitial coincide, the Jacobian matrix in (4) is correct for all equations related to the parameter set Ik. But the columns of Xk differ from each other. A second Newton step would then become what is, in the literature, often called an inexact Newton step [4, Remark 5.7].

Consider only the column related to the parameter index i1∈Ik in (4):

Assume that x~mkϵN is fixed and A(μi1s) is invertible for all μi1s∈Ik. A(μi1s) and b(μi1s) depend linearly on μi1s. A(⋅) and b(⋅) are analytic matrix- and vector-valued functions, respectively. Due to [2, Theorem 2.4]

, the singular value decay of the matrix

Sk in (4) is exponential. Algorithm 1 exploits this fact and approximates Sk in (4) by a low-rank matrix.

A 3d jetty in a channel with the geometric configuration

is considered. The left Dirichlet inflow is given by the velocity profile

At x=12, the do nothing boundary condition holds. At z=0, deformation and velocity in normal direction is prohibited. Everywhere else on ∂Ω, the velocity and the deformation vanish. For the Navier-Stokes equations, stabilized Stokes elements [4, Lemma 4.47] are used.

The fixed first Lamé parameter is λs=200000. With these parameters, solid configurations with Poisson ratios between 0.38462 and 0.45455 are covered. The fluid density is ρf=12.5 and the kinematic fluid viscosity is νf=0.04.

A server operating CentOS 7 with 2 AMD EPYC 7501 and 512GB RAM, MATLAB® 2017b in combination with the htucker MATLAB toolbox [3] and the finite element toolkit GASCOIGNE [1] was used to compare Algorithm 1 with 1500 Newton iterations applied consecutively. The parameter set Sμ was split into K=15 subsets.

After the Newton approximations x~mkϵN are available for all k∈{1,...,15}, the LU decomposition of the mean-based preconditioner PkT [5, Chapter 3.2] of A(μi1s) is computed separately on every subset Ik

. To estimate the parameters

d and c for the ChebyshevT method [5, Algorithm 3]

, the eigenvalues of the matrices

are taken into consideration. For all K=15 subsets, they were estimated to d=1 and c=0.1 for a small number of N=945 degrees of freedom within 28.3 seconds (computation time for the Newton approximations included). Every approximation is related to a certain shear modulus. Therefore, all problems differ by the Poisson ratio of the solid. The y-axis in Figure 1, on the other hand, corresponds to the relative residual norm

The approximations obtained by the Standard Newton iterations within 238 hours (1507 Newton steps) provided, as visualized in Figure 1, relative residuals with norms smaller than 10−12 each. Algorithm 1 took 519 minutes (35 Newton steps) to compute the low-rank approximation. In addition to the 28.3 seconds for the eigenvalue estimation, the 20 Newton steps to compute x~mkϵN for all k∈{1,...,15} took, in total, 195.65 minutes and the 15 Newton steps for the matrix equations (4) took, in total, 323.3 minutes.

Low-rank methods can be used to compute approximations to parameter-dependent nonlinear FSI discretizations, in particular, if each of the subsets, the parameter set is split into, does contain problems that do not differ too much from each other. The Newton step on the subset uses the same Jacobian matrix and the same initial guess for the whole subset. It has to provide acceptable convergence within one single step not only for the upper median problem.

Whether the results can be improved by choosing the subsets Ik or the approximation ranks on these subsets adaptively, is still open. Moreover, how these low-rank methods can be applied to fully nonlinear FSI problems that use, in addition to the Navier-Stokes equations on the fluid, for instance, the St. Venant Kirchhoff model equations [4, Definition 2.18] on the solid is an open problem. Then, the right hand side in (4) would have to be approximated.