A Low-Cost, Controllable and Interpretable Task-Oriented Chatbot: With Real-World After-Sale Services as Example

Though widely used in industry, traditional task-oriented dialogue systems suffer from three bottlenecks: (i) difficult ontology construction (e.g., intents and slots); (ii) poor controllability and interpretability; (iii) annotation-hungry. In this paper, we propose to represent utterance with a simpler concept named Dialogue Action, upon which we construct a tree-structured TaskFlow and further build task-oriented chatbot with TaskFlow as core component. A framework is presented to automatically construct TaskFlow from large-scale dialogues and deploy online. Our experiments on real-world after-sale customer services show TaskFlow can satisfy the major needs, as well as reduce the developer burden effectively. 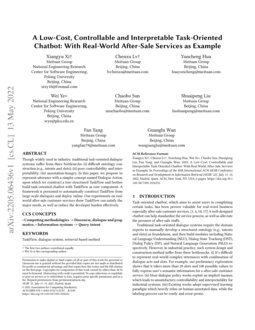 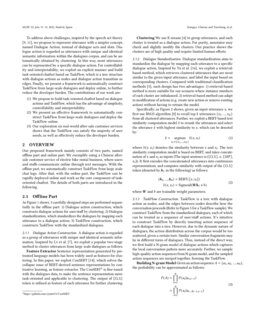 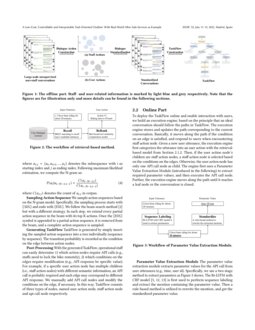 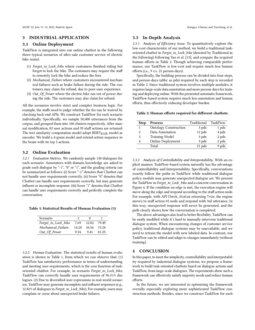 To address above challenges, inspired by the speech act theory (Searle, 1975; Traum and Hinkelman, 1992), we propose to represent utterance with a simpler concept, named Dialogue Action, instead of dialogue acts and slots. Dialogue action is regarded as utterances with unique and identical semantic information within the dialogues corpus, and can be automatically obtained by clustering. In this way, most utterances can be represented by a specific dialogue action. For controllability and interpretability, we exploit an explicit manner and build task-oriented chatbot based on TaskFlow, which is a tree structure with dialogue actions as nodes and dialogue action transition as edges. Finally, we present a framework to automatically construct TaskFlow from large-scale dialogues and deploy online, to further reduce the developer burden.

The contributions of our work are:

Our proposed framework mainly consists of two parts, named offline part and online part. We exemplify using a Chinese after-sale customer service of electric bike rental business, where users and staffs communicate online through text messages. With the offline part, we automatically construct TaskFlow from large scale chat logs. After that, with the online part, the TaskFlow can be rapidly deployed online and work as the core component of task-oriented chatbot. The details of both parts are introduced in the following.

A dialogue action is regarded as a group of utterances with unique and identical semantic information. Inspired by Lv et al. (2021), we exploit a popular two-stage method to cluster utterances from large scale dialogues as follows.

(Krishna and Murty, 1999) to group utterances, and each cluster is treated as a dialogue action. For purity, annotator may check and slightly modify the clusters. Our practice shows the clusters are of high quality and require limited human efforts.

Dialogue standardization aims to standardize the dialogue by mapping each utterance to a specific dialogue action. Inspired by Yu et al. (2021), we exploit a retrieval-based method, which retrieves clustered utterances that are most similar to the given input utterance, and label the input based on corresponding clusters. Compared with traditional classification methods (Kowsari et al., 2019), such design has two advantages: 1) retrieval-based method is more suitable for our scenario where instance numbers of each cluster are imbalanced. 2) retrieval-based method can adapt to modification of actions (e.g. create new action or remove existing action) without having to retrain the model.

Specifically, as Figure 2 shows, given an input utterance x, we first use BM25 algorithm (Robertson and Zaragoza, 2009) to recall top k utterances {x1,...,xk} from all clustered utterances. Further, we exploit a BERT-based text similarity computation model S to rerank the utterances and select the utterance ^x with highest similarity to x, which can be denoted by:

where S(x,xi) denotes the similarity between x and xi. The text similarity computation model is based on BERT, and takes concatenation of x and xi as inputs (The input sentence is ([CLS], x, [SEP], xi)). It first encodes the concatenated utterances into continuous representations, and computes similarity with output of the [CLS] token (denoted by h1 in the following) as follows:

where W and b are trainable weight parameters.

TaskFlow is a tree with dialogue action as nodes, and the edges between nodes describe how the conversation proceeds (Refer to Figure 5

for a TaskFlow sample). We construct TaskFlow from the standardized dialogues, each of which can be treated as a sequence of user/staff actions. It’s intuitive to construct TaskFlow by directly inserting action sequence of each dialogue into a tree. However, due to the dynamic nature of dialogues, the action distribution across the corpus would be too scattered, given a certain turn. Similar conversation fragments may lie in different turns of dialogues. Thus, instead of the direct way, we first build a N-gram model of dialogue actions which captures the local conversation pattern more accurately. Further, we sample high-quality action sequences from N-gram model, and the sampled action sequences are merged together, forming the TaskFlow.

, the probability can be approximated as follows:

where ai:j={ai,ai+1,...,aj} denotes the subsequence with i as starting index and j

as ending index. Following maximum likelihod estimation, we compute the N-gram as:

Generating TaskFlow TaskFlow is generated by simply inserting the sampled action sequences into a tree individually (sequence by sequence). The transition probability is recorded as the condition on the edge between action nodes.

Parameter Value Extraction Module The parameter value extraction module extracts parameter values for the API call from user utterances (e.g., time, user id). Specifically, we use a two-stage method to extract parameters as Figure 3 shows. The Bi-LSTM with CRF model (Lample et al., 2016; Xiangyu et al., 2019; Xi et al., 2021) is first used to perform sequence labeling and extract the mention containing the parameter value. Then a rule-based method is utilized to rewrite the mention, and get the standardized parameter value.

TaskFlow is integrated into our online chatbot in the following three typical scenarios of after-sale customer service of electric bike rental:

All the scenarios involve strict and complex business logic. For example, the staffs need to judge whether the fee can be waived by checking back-end APIs. We construct TaskFlow for each scenario individually. Specifically, we sample 50,000 utterances from the corpus, and grouped them into 100 clusters respectively. After manual modification, 82 user actions and 93 staff actions are retained. The text similarity computation model adopt BERTBASE model as encoder. We build a 4-gram model and extend action sequence in the beam with its top 5 actions.

The statistical results of human evaluation is shown in Table 1, from which we can observe that: (1) TaskFlow has satisfactory performance in terms of understanding and meeting user requirements, which is the core function of task-oriented chatbot. For exmaple, in scenario Forget_to_Lock_bike, TaskFlow can correctly handle user requirements of 96.31% dialogues. (2) Due to diversified user expressions in real-world scenarios, TaskFlow may generate incomplete and influent responses (e.g., 12.82% of dialogues in Forget_to_Lock_bike). For example, users may complain or curse about unexpected brake failures.

To quantitatively explore the low-cost characteristic of our method, we build a traditional task-oriented chatbot in Forget_to_Lock_bike (denoted by Traditional in the following) following Yao et al. (2013), and compare the required human efforts in Table 2. Though achieving comparable performance, our TaskFlow is low-cost and require much less human efforts (i.e., 9 v.s. 21 person-days).

Specifically, the building process can be divided into four steps, and person-days (abbr. as pds) required by each step is recorded in Table 2. Since traditional system involves multiple modules, it requires large-scale data annotation and more person-days for training and deploying online. With the presented automatic framework, TaskFlow-based system requires much less annotation and human efforts, thus effectively reducing developer burden.

3.3.2. Analysis of Controllability and Interpretability

With an explicit manner, TaskFlow-based system naturally has the advantage of controllability and Interpretability. Specifically, conversations exactly follow the paths in TaskFlow while traditional dialogue policy module may generate unexpected dialogue act. We present the TaskFlow in Forget_to_Lock_bike and a concrete conversation in Figure 4. If the condition on edge is met, the execution engine will move along the edge and respond according to the staff action node. For example, with API Check_Status returning True, the engine moves to staff action #2 node and respond with 3rd utterance. In this way, unexpected response will never be generated, and the path clearly shows how the conversation is completed.

The above advantages also lead to better flexibility. TaskFlow can be easily modified while it’s hard to manually intervene traditional dialogue system. When encountering changes of customer service policy, traditional dialogue systems may be unavailable, and we need to retrain the model with new labeled data. In contrast, our TaskFlow can be edited and adapt to changes immediately (without training).

In this paper, to meet the simplicity, controllability and interpretability required by industrial dialogue systems, we propose a framework to build task-oriented chatbots based on dialogue actions and TaskFlow, from large-scale dialogues. The experiments show such a framework can effectively satisfy majority needs and reduce human efforts.

In the future, we are interested in optimizing the framework overally especially exploring more sophisticated TaskFlow construction methods. Besides, since we construct TaskFlow for each scenario separately, how to construct multi-scenario TaskFlow is worth investigating.

In this paper, we propose a framework to build task-oriented chatbots based on dialogue actions and TaskFlow, to meet the simplicity, controllability and interpretability required by industrial systems. Our practical experience shows that such a framework can effectively satisfy majority needs and reduce human efforts. The retrieval system greatly contributes to the success of TaskFlow.

Presenter: Xiangyu Xi. He is an algorithm engineer at Meituan. His research interests include information retrieval, dialogue system, and information extraction. He is currently working on the construction of task-oriented dialogue system in Meituan.