This paper will suggest a new finite element method to find a P^4-velocity and a P^3-pressure solving incompressible Stokes equations at low cost. The method solves first the decoupled equation for a P^4-velocity. Then, using the calculated velocity, a locally calculable P^3-pressure will be defined component-wisely. The resulting P^3-pressure is analyzed to have the optimal order of convergence. Since the pressure is calculated by local computation only, the chief time cost of the new method is on solving the decoupled equation for the P^4-velocity. Besides, the method overcomes the problem of singular vertices or corners. 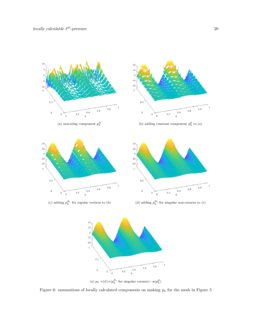 In this paper, we introduce a new finite element method for solving the ...
Xiu Ye, et al. ∙

On Fourier analysis of polynomial multigrid for arbitrary multi-stage cycles

The Fourier analysis of the p-multigrid acceleration technique is consid...
Will Trojak, et al. ∙

High order finite element methods for incompressible Stokes equations have been developed well in 2 dimensional domain and analyzed along to the inf-sup condition [4, 6, 8]

. They, however, endure their large degrees of freedom and have to avoid singular vertices or corners.

Recently, we have found a so called sting function causing the discrete Stokes equation to be singular on the presence of exactly singular vertices in the Scott-Vogelius finite element method. Even on nearly singular vertices, the pressure solution is easy to be spoiled. To fix the problem, a new error analysis was devised in a successive way and restored the ruined pressure by simple post-process [7].

In this paper, employing the precedented new error analysis, we will suggest a new finite element method to find a P4-velocity and a P3-pressure solving incompressible Stokes equations at low cost.

The method will solve first the decoupled equation for a divergence-free P4-velocity. Then, using the calculated velocity, we will define a P3-pressure by exploiting locally calculable components in the Falk-Neilan and Scott-Vogelius finite element methods [4, 6, 8]. The resulting P3-pressure is analyzed to have the optimal order of convergence.

Since the pressure is calculated by local computation only, the chief time cost of the new method is on solving the decoupled equation for the P4-velocity. Besides, the method overcomes the problem arising from the singular vertices or corners.

The suggested P3-pressure consists of several components, each of whom needs others to be defined in a successive way. In the overall paper, the characteristics of sting functions depicted in Figure 1-(a) will also play a key role as in the precedented work in [7].

The paper is organized as follows. In the next section, the detail on finding a P4-velocity will be offered. Based on the orthogonality of sting and non-sting functions, we will introduce an orthogonal decomposition of the space of P3-pressures in Section 3. The non-sting and constant components will be defined in Section 4. Then, Section 5 will be devoted to defining 3 sting components for regular vertices, singular non-corner vertices, singular corners, respectively. It will be done on clustering sting functions vertex-wisely. Finally, after summing up all the components to define a P3-pressure in Section 6, numerical tests will be presented in the last section.

Throughout the paper, for a set S⊂R2, standard notations for Sobolev spaces are employed and L20(S) is the space of all f∈L2(S) whose integrals over S vanish. We will use ∥⋅∥m,S, |⋅|m,S and (⋅,⋅)S for the norm, seminorm for Hm(S) and L2(S) inner product, respectively. If S=Ω, it may be omitted in the subscript. Denoting by Pk, the space of all polynomials of degree less than or equals k, f∣∣S∈Pk will mean that f∈L2(Ω) coincides with a polynomial in Pk on S.

2 Velocity from the decoupled equation

Let Ω be a simply connected polygonal domain in R2. In this paper, we will approximate a pair of velocity and pressure (u,p)∈[H10(Ω)]2×L20(Ω) which satisfies an incompressible Stokes equation:

Given a family of shape-regular triangulations {Th}h>0 of Ω, define Pkh(Ω) as the following space of piecewise polynomials:

The degrees of freedom of ϕ∈Σh,0 are the Hessians, gradients and values of ϕ at vertices and its normal derivatives at midpoints of edges.

Define a divergence-free space Zh,0 as

where Vin,Ein,Vbdy, and Vcnr are the numbers of interior vertices, interior edges, boundary vertices and corners, respectively [4].

Then, we can solve uh∈Zh,0 satisfying the following decoupled equation:

), respectively. Then we estimate

Let Πhϕ∈Σh,0 be a projection of ϕ such that the Hessians, gradients and values of ϕ−Πhϕ at vertices and its normal derivatives at midpoints of edges vanish. Then, since u∈[H5(Ω)]2, by Bramble-Hilbert lemma, we have

It is written in the form:

For a triangle K∈Th and an integer k≥0, define

In the remaining of the paper, we will use the following notations:

We assume the following on Th to exclude pathological meshes.

Every triangles in Th has at most one corner point of ∂Ω.

Let V be a vertex of a triangle K. Then there exists a unique function sVK∈P3(K) satisfying the following quadrature rule:

as depicted in Figure 1-(a). Given a vertex V of K, we note that

Thus, the values of sVK are inherited from those of sˆVˆK as

If q=αsVK for a scalar α, we call it a sting function of V on K, named after the shape of its graph as in Figure 1-(a).

For a triangle K, define a subspace of P3(K) as

For a triangle K, let

and define a subspace of P3(K) as

An example of its graph is depicted in Figure 1-(b).

The fact dimB(K)=6 induces the following, with an aid of Lemma 3.1 below,

The above lemma tells that ∥divv∥0,K is a norm of v∈B(K). Furthermore, we can show that

Let 1K∈P3(K) be a constant function of value 1 on K. Then, we can decompose P3(K) as in the following lemma. We will notate

be a Hermite interpolation of

at all vertices V and gravity centers G of triangles in Th. Then, if p∈H4(Ω), we have

called the non-sting, constant and sting components of Πhp, respectively. We will approximate them component-wisely in next two sections, exploiting the following equation for Πhp,

We note that uh in (31) is the previously calculated uh∈Zh,0 in (3) and rh∈Qh,00 is the unique solution of the following equation,

Similarly to (28), decompose rh into

Then by definition of N(K) in (16), rNh∣∣K∈N(K) is determined by (34). Thus we can calculate rNh locally on each triangle K in Th.

where pNh=rNh defined in Lemma 4.1.

For each triangle K∈Th, let CK be a constant such that

If K1,K2 are two adjacent triangles sharing an edge, there exists a test function vh∈Vh,00 such that

Fix a triangle K0. Then for each triangle K∈Th, we can choose a telescoping sequence of triangles:

which are calculated locally as in (42).

The difference CK−CK0 does not depend on the choice of telescoping sequence in (43) from the existence of rCh satisfying (39).

We can establish Lemma 4.4 below that tells the existence of a nontrivial vh∈Vh,00 such that

for a constant β>0 regardless of h.

For each triangle K in Th, define zK∈[P4]2 so that

Then, for a reference triangle ^K and an affine map F:^K⟶K, we have

We note rSh′ is continuous at every vertex, since so is rh∈Qh,00 and rNh,rCh′ vanish at all vertices in Th. By (32) and (52), the vertex-continuous sting function rSh′∈Sh satisfies the following system:

If Th has no singular corner, we could revise (53) slightly with the Falk-Neilan finite element space [4], to obtain a sting component in Sh approximating ΠhpS of Πhp in (28).

To avoid a global system such as (53), we will seek locally calculable sting components vertex-wisely in the next section by unleashing the vertex-continuity.

For each vertex V, let S(V) be the space of all sting functions of V, that is,

where K1,K2,⋯,KJ are all triangles in Th sharing V. An example of a function in S(V) is represented in Figure 2.

Then we note that

Let K1,K2 be two adjacent triangles sharing an edge and a vertex V as in Figure 3. Denote other 3 vertices and a unit tangent vector by W0,W1,W2,τ so that

Assuming K1,K2 are counterclockwisely numbered with respect to V, by simple calculation, we have

It can be written in simpler form: