Human drivers utilize the visual cues from the road to performance some fundamental driving tasks, e.g. lane keeping and lane change, for the complex driving maneuvers. Lane keeping and lane change can be generalized as one task, because both of them are to drive a vehicle onto a target lane. In this paper, we first design a lane-change path planner based on HD (High-Definition) map for autonomous driving systems using control theory. Later, applying the similar idea, a lane change controller using a monocular camera is designed. 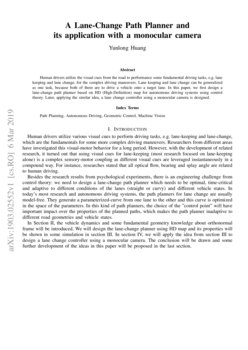 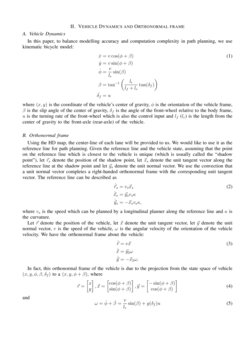 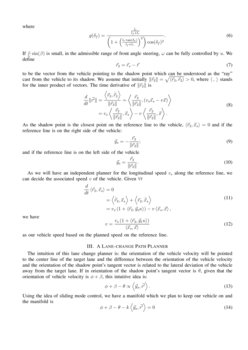 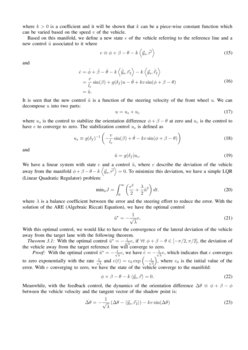 In this article, the authors present a novel method to learn the persona...
Zhuoxi Liu, et al. ∙

An automated driving system should have the ability to supervise its own...
Daofei Li, et al. ∙

Human drivers utilize various visual cues to perform driving tasks, e.g. lane-keeping and lane-change, which are the fundamentals for some more complex driving maneuvers. Researchers from different areas have investigated this visual-motor behavior for a long period. However, with the development of related research, it turned out that using visual cues for lane-keeping (most research focused on lane-keeping alone) is a complex sensory-motor coupling as different visual cues are leveraged instantaneously in a compound way. For instance, researches stated that all optical flow, bearing and splay angle are related to human driving.

Besides the research results from psychological experiments, there is an engineering challenge from control theory: we need to design a lane-change path planner which needs to be optimal, time-critical and adaptive to different conditions of the lanes (straight or curvy) and different vehicle states. In today’s most research and autonomous driving systems, the path planners for lane change are usually model-free. They generate a parameterized-curve from one lane to the other and this curve is optimized in the space of the parameters. In this kind of path planners, the choice of the ”control point” will have important impact over the properties of the planned paths, which makes the path planner inadaptive to different road geometries and vehicle states.

In Section II, the vehicle dynamics and some fundamental geometry knowledge about orthonormal frame will be introduced. We will design the lane-change planner using HD map and its properties will be shown in some simulation in section III. In section IV, we will apply the idea from section III to design a lane change controller using a monocular camera. The conclusion will be drawn and some further development of the ideas in this paper will be proposed in the last section.

In this paper, to balance modelling accuracy and computation complexity in path planning, we use kinematic bicycle model:

where vs is the speed which can be planned by a longitudinal planner along the reference line and κ is the curvature.

In fact, this orthonormal frame of the vehicle is due to the projection from the state space of vehicle (x,y,ϕ,β,δf) to a (x,y,ϕ+β), where

If vlrsin(β) is small, in the admissible range of front angle steering, ω can be fully controlled by u. We define

to be the vector from the vehicle pointing to the shadow point which can be understood as the “ray” cast from the vehicle to its shadow. We assume that initially ∥→r2∥=√⟨→r2,→r2⟩>0, where ⟨,⟩ stands for the inner product of vectors. The time derivative of ∥→r2∥ is

As we will have an independent planner for the longitudinal speed vs along the reference line, we can decide the associated speed v of the vehicle. Given ∀t

as our vehicle speed based on the planned speed on the reference line.

Using the idea of sliding mode control, we have a manifold which we plan to keep our vehicle on and the manifold is

where k>0 is a coefficient and it will be shown that k can be a piece-wise constant function which can be varied based on the speed v of the vehicle.

Based on this manifold, we define a new state e of the vehicle referring to the reference line and a new control ~u associated to it where

It is seen that the new control ~u is a function of the steering velocity of the front wheel u. We can decompose u into two parts:

We have a linear system with state e and a control ~u, where e describe the deviation of the vehicle away from the manifold ϕ+β−θ−k⟨→ys,→r′⟩=0. To minimize this deviation, we have a simple LQR (Linear Quadratic Regulator) problem:

where λ is a balance coefficient between the error and the steering effort to reduce the error. With the solution of the ARE (Algebraic Riccati Equation), we have the optimal control

With this optimal control, we would like to have the convergence of the lateral deviation of the vehicle away from the target lane with the following theorem.

With the optimal control ~u⋆=−1√λe, if ∀t ϕ+β−θ∈[−π/2,π/2], the deviation of the vehicle away from the target reference line will converge to zero.

With the optimal control ~u⋆=−1√λe, we have ˙e=−1√λe, which indicates that e converges to zero exponentially with the rate 1√λ and e(t)=e0exp(−t√λ), where e0 is the initial value of the error. With e converging to zero, we have the state of the vehicle converge to the manifold:

Meanwhile, with the feedback control, the dynamics of the orientation difference Δθ≡ϕ+β−ϕ between the vehicle velocity and the tangent vector of the shadow point is:

and take the time derivative on both sides of above equation again we have:

It shows that the near the equilibrium point (0,0), dynamics of Δθ and ˙Δθ

We see there are two independent coefficients (k,λ) whose value we can choose independently. For λ, most lane-change maneuvers happened on highway have the duration of 3−5 seconds. As λ governs the exponential convergence rate at which the system converges to the manifold and the manifold is only the necessary condition for the lane change, we choose the λ around 1. Once the value of λ is fixed and the speed v is known to be inside a range in a time duration, the dynamics of the lateral deviation is

Based on the dynamics of Δθ, we have

If we choose 1√λ>kv, the error term on the right side of above equation will decay faster than the dynamics of ⟨→ys,→r⟩. The slow dynamics will be

In the second simulation which is shown in figure 3, the planner generates a lane change trajectory in a circular course of radius R=20meter at a high longitudinal speed along the reference line (v=20meter/second) for the vehicle starting from x=−23.5meters and y=0meters. k=0.1 and λ=0.1. The planned speed along the vehicle will adjust its speed v based on (12).

In this section, we proposed a lane-change path planner. This idea originated from different previous work: the orthonormal frame has been well introduced in the work by krishna; the sliding mode idea for the trajectory tracking has been introduced in protugal. In our work, we first showed that through a projection of the state space of the vehicle, we can have the orthonormal frame. It can be shown different vehicle model–unicycle model, kinematic bicycle model, dynamic bicycle model or even more complex model, with the projection operation, we can always use this orthonormal frame for path planning. Second, by decomposing the steering input of the vehicle into two components–one is for stabilizing the orientation difference between that vehicle and the road at zero and the other is for steering the vehicle onto the target lane, it is shown that the optimal control of the lane-change path planning is a simple linear system optimal control problem. Thus, in the autonomous driving system, in lane-change path planning, an optimization problem of long horizon (t≈8seconds) can be avoided. Most important contribution of this work is that using this path planner, there is no overshoot in lane-change path planning and the lane-change time is simply controlled by two parameters λ and k. The converging rate of the vehicle to the target lane is upper bounded by 1√λ and lower bounded by kv. With a new constant λ0<1 and an upper bound of the speed v in a time duration, we have

At the beginning of the lane change Δθ=0, the reference line is switched from the current lane to a new target lane, there is a jerk in the steering input, it is seen that this difference is

By choosing different values of λ0

and in different conditions of the road geometry and vehicle speed, we can have estimate the lane-change time easily. It is obvious, the lane-change trajectories generated by our path planner are asymmetric unlike the trajectories from the polynomials and this asymmetry is also consistent to human-drivers’ daily behavior.

Splay angle is the angle between the optical projection of the lane edge and a vertical line in the image plane. We use the ideas in the paper by Li Li. Please refer to that material for more details on the splay angles. In the scenario of straight lanes, we use the coordinate system where x-axis is in parallel with the edges of the lanes, y-axis is perpendicular to the edges of the lanes and z-axis is orthogonal to the ground surface of the lanes. Given the y-axis coordinate of the left(right) edge of a target lanes is yL(yR), lateral deviations of the vehicle away from the left and right edges are YL=yL−y and YR=y−yR. The tan value of the splay angle of the left edge is

where H is the height of the observer and ϕ is the orientation angle of the vehicle and in the scenario of straight lanes it is the angle difference between the vehicle orientation and the path. The illustration of splay angles is in figure 4.

Iv-B Estimation of the vehicle pose

Based on this linear equation, the estimation of vehicle pose are:

In lane-change, we have the target lane which we would like to drive on and the splay angles of the left and right edges are the guidance for the human drivers. To balance the left and right splay angles (i.e. YL=YR) by steering the front wheel, if S>0 which indicates YL>YR, the vehicle will be steered to left edge (i.e. ϕ+β>0) and if S<0, the vehicle willbe steered to the right edge (ϕ+β<0). This indicates that ϕ+β is proportional to S and the manifold is

Using the idea from the lane-change path planner, we define the new error state ~e as

where (k,λ) are two positive coefficients and the steering front wheel control is

Assuming |ϕ+β|≪1 and |ϕ|≪1, taking the derivative on both sides of above equation and linearizing the dynamics near (0,0),

When ϕ+β converges to zero, ϕ will also converge to zero, which indicates that β→0, when t→∞. On the manifold (40), S will approach to zero with ϕ+β.

Here we provide a simple simulation in figure 5 with the vehicle dynamics and the splay angles based on computation. The vehicle is at speed v=20meter/second. The left edge of the target lane is at y=5.1meters and the right edge is at y=1.7meters. We have λ=1 and k=0.05. It is shown that the vehicle converges to the reference line y=3.4meters.

In this paper, we first proposed a lane-change path planner based on HD map. Later, a vision-based lane-change controller is designed using the similar idea. The path planner showed its versatility to different road geometric conditions and vehicle states. This path planner can be used in future research to investigate the safety in lane-change planning. Also, the vision-based controller showed that in some simple scenarios, using only monocular information as guidance, human can perform lane-change maneuvers. First, there is an engineering challenge to extend the lane departure warning system which is using monocular camera to a lane-change(lane-keeping) controller. Also, based on this controller, the psychological researchers can design new experiments to investigate whether human drivers also use this control law to do lane-change and what the values of the parameters (λ,k) are.