Deep neural networks (DNNs) have been widely employed in recommender systems including incorporating attention mechanism for performance improvement. However, most of existing attention-based models only apply item-level attention on user side, restricting the further enhancement of recommendation performance. In this paper, we propose a knowledge-enhanced recommendation model ACAM, which incorporates item attributes distilled from knowledge graphs (KGs) as side information, and is built with a co-attention mechanism on attribute-level to achieve performance gains. Specifically, each user and item in ACAM are represented by a set of attribute embeddings at first. Then, user representations and item representations are augmented simultaneously through capturing the correlations between different attributes by a co-attention module. Our extensive experiments over two realistic datasets show that the user representations and item representations augmented by attribute-level co-attention gain ACAM's superiority over the state-of-the-art deep models. 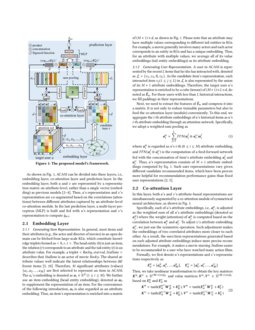 Given these problems, we propose a novel deep recommendation model with attribute-level co-attention, namely ACAM

(Attribute-level Co-Attention Model). ACAM demonstrates superior performance due to the following merits. First, its item representations and user representations are generated based on a set of

attribute embeddings rather than a single embedding, where the attributes are distilled from open knowledge graphs (KGs) as side information. Second, the co-attention module in ACAM captures the correlations between different attribute embeddings to augment user/item representations. As we know, there may exist correlations between different item attributes, indicating the latent relationships between items. For example, in movie attributes, actor Stallone is more correlated to genre action film, and actor GONG Li is more correlated to director ZHANG Yimou

. Therefore, the latent relationships between the target users and the candidate items are uncovered precisely by the user/item representations augmented based on attribute correlations, resulting in enhanced recommendation performance. Furthermore, we add an objective of knowledge graph embedding (KGE) into the loss function to lean better attribute embeddings.

In summary, we have the following contributions in this paper:

1. We propose an attribute-level co-attention mechanism in a deep recommendation model, to capture the correlations between different user/item attributes sophisticatedly, and then augment user/item representations simultaneously which are helpful for recommendation performance enhancement.

, which quantifies the probability that

are represented by a representation matrix on attribute-level, rather than a single vector (embedding) as previous models

’s representation are co-augmented based on the correlations (attentions) between different attributes captured by an attribute-level co-attention module. In the last prediction layer, a multi-layer perceptron (MLP) is built and fed with

In general, most items and their attributes (e.g., the actor and director of movies) in an open domain can be fetched from large-scale KGs, which constitute knowledge triplets formed as <h,r,t>. The head entity (h) is just an item, the relation (r) corresponds to an attribute and the tail entity (t) is an attribute value. For example, a triplet <Rocky,starred,Stallone> describes that Stallone is an actor of movie Rocky. The shared attribute values well indicate the latent relationships between different items (Zhou and et al., 2018; Shen and et al., 2019). Therefore, M significant attributes (values) {a1,a2,...,aM} are first selected to represent an item in ACAM. The ai’s embedding is denoted as ai∈Rd (1≤i≤M). We further use an item embedding (head entity embedding), denoted as a0, to supplement the representation of an item. For the convenience of the following introduction, a0 is also regarded as an attribute embedding. Thus, an item’s representation is enriched into a matrix of (M+1)×d, as shown in Fig. 1. Please note that an attribute may have multiple values corresponding to different tail entities in KGs. For example, a movie generally involves many actors and each actor corresponds to an entity in KGs and has a unique embedding. Thus, for an attribute with multiple values, we average all of its value embeddings (tail entity embeddings) as its attribute embedding.

’s representation is enriched to be a cube (tensor) of

historical interactions, we fill paddings in their representations.

Next, we need to extract the features of ~Eu and compress it into a matrix. It is not only to reduce trainable parameters but also to feed the co-attention layer (module) conveniently. To this end, we aggregate the i-th attribute embeddings of u’s historical items as u’s i-th attribute embedding through an attention network. Specifically, we adopt a weighted sum pooling as

In this layer, both u’s and v’s attribute-based representations are simultaneously augmented by a co-attention module of symmetrical neural architecture, as shown in Fig. 1.

Then, we take nonlinear transformation to obtain the key matrices Ku,Kv∈R(M+1)×dK and value matrices Vu,Vv∈R(M+1)×dV based on Eua and Eva as

are transformation bias vectors. Next, we obtain a co-attention map

S=KuKv⊤, which is a square matrix of (M+1)×(M+1) and each entry Sij quantifies the affinity between u’s i-th attribute and v’s j-th attribute, i.e., the correlation between aui and avj. Accordingly, S stores attribute-level attentions.

Based on Vu,Vv along with S, all u’s and v’s representations are revised as

where U,V∈R(M+1)×dV, and each row of them represents an adjusted attribute embedding. And softmaxcol(⋅) and softmaxrow(⋅) represent the softmax computation in terms of column and row, respectively.

In order to reduce the number of trainable parameters in ACAM, we set Ku=Vu,Kv=Vv,d=dK=dV in our experiments. It has been proven that such reduction does not affect the final recommendation performance.

The last operation in this layer is to use sum pooling111It was proven that sum pooling is a bit better than max/min/avg pooling through our experiments. in terms of column to compress matrices U,V into the final representations of u and v as

In ACAM’s prediction layer, the final score ^yuv is computed through an MLP of three layers fed with the concatenation of ru, rv, (avgrow(Eua))⊤ and (avgrow(Eva))⊤, where avgrow(⋅) is the average operation in terms of row.

As we introduced before, the item embedding a0 and attribute embedding ai(1≤i≤M) are the basis of computing ^yuv. Besides the cross-entropy loss as in (He et al., 2017; He and et al., 2018), we further use a KGE objective to learn a0 and ai better, since an item and an attribute value correspond to a head entity and a tail entity in a KG, respectively. Specifically, we adopt the objective of transH (Wang and et al., 2014) model since it learns many-to-many relations effectively. Therefore, we minimize the following objective function to learn ACAM’s parameters:

where Y is the union of observed user-item interactions and the negative feedbacks, and K is the observed triplet set in the KG. The head entity’s embedding h and the tail entity’s embedding t in the second term are used as a0 and ai, respectively. And wr and dr

are the hyperplane and translation vector in transH, respectively.

We conducted our experiments against two realistic datasets, i.e, Douban movies and NetEase songs222Douban: https://movie.douban.com, NetEase: https://music.163.com. The statistics of these two datasets are listed in Table 1. We fetched Douban movies’ attribute values from a large-scale Chinese KG CN-DBpedia (Xu et al., 2017). In our experiments, we selected four significant attributes (M=4) for the two datasets, i.e., actor, director, writer and genre for Douban movies, and singer, album, composer and lyricist for NetEase songs. To reproduce our experiment results conveniently, we have published our datasets and ACAM’s source code on https://github.com/DeqingYang/ACAM-model.

NCF (He et al., 2017): This is a DNN-based recommendation model consisting of a GMF (generalized matrix factorization) layer and an MLP, where each user and item is represented only by a single embedding.

NAIS (He and et al., 2018): This is an attention-based recommendation model in which only user representations are refined by attention mechanism, and each item is represented by a single embedding.

AFM (Xiao and et al., 2017): It is a neural version of FM which adds an attention-based pooling layer after the pairwise feature interaction layer.

RippleNet (et al., 2018): It is a representative KG-based recommendation model, which was compared with ACAM to highlight ACAM’s strengths in knowledge (attribute) exploitation.

In the following display of experiment results, we adopt three popular metrics evaluating top-n recommendation or ranking, i.e., HR@n (Hit Ratio), nDCG@n (Normailzed Discounted Cumulative Gain) and RR (Reciprocal Rank). To avoid statistics bias, all model’s performance are reported as the average scores of 3 runnings. All baselines’ hyper-parameters were set to the optimal values in their origin papers.

At first, we list the settings of some important hyper-parameters in our experiments in Table 3. The results of hyper-parameter tuning are not displayed due to space limitation. ACAM and other models incorporating attributes enhance their performance a little when more significant attributes are fed, but ACAM still keeps its superiority. In Table 2, we only display the results of L=3 and L=10 towards the two recommendation tasks. We did not focus on the scenario of L=1 because a user’s preference can not be inferred precisely by only one historical interacted item. Given that many users’ preferences may vary as time elapses, using too many historical items to represent a user would induce noises, so we neglected the cases of L>10. We also find that almost all models only improve their performance a bit when L increases from 3 to 10. It implies that using 3 recent historical items to represent a user is adequate for many models to generate precise results. In addition, ACAM achieves the best performance when λ1 is small, implying that too large weight of KGE objective will bias the synthetic objective of Eq. 5.

We propose a novel recommendation model ACAM in this paper, which first represents users and items with fine-grained attribute embeddings, and then augments user representations and item representations simultaneously by an attribute-level co-attention module. Such augmented representations are proven beneficial to performance gains through our extensive experiments.