A new kind of geometric invariants is proposed in this paper, which is called affine weighted moment invariant (AWMI). By combination of local affine differential invariants and a framework of global integral, they can more effectively extract features of images and help to increase the number of low-order invariants and to decrease the calculating cost. The experimental results show that AWMIs have good stability and distinguishability and achieve better results in image retrieval than traditional moment invariants. An extension to 3D is straightforward. 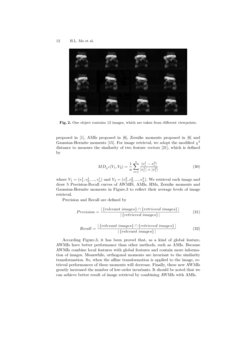 The concepts of moment and moment invariants were first proposed by Hu in 1962 [1]. He employed the theory of algebraic invariants, which was studied in 19th century[2]

[3]. But the similarity transform can’t represent all geometric deformations. When the distance between the camera and the object is much larger than the size of the object itself, the geometric deformation of the object can be represented by the affine transform. The landmark work of affine moment invariants(AMIs) was proposed by Flusser and Suk in 1993 [4]. They used geometric moments to construct several low-order and low-degree AMIs, which were more effective to practical applications, for example, image registration [5]. In order to obtain more AMIs, Suk and Flusser proposed the graph method which can generate AMIs of every order and degree [6]. Xu and Li [7]

derived moment invariants in the intuitive way by multiple integrals of invariant geometric primitives like distance, area and volume. This method not only simplified the construction of AMIs, but also made them have a clear geometric meaning. Recently, Li

el at. improved the method of geometric primitives [8]

. They found a way to further simplify geometric primitives and used dot-product and cross-product of vectors to generate invariants. Meanwhile, researchers were also constantly expanding the definition of moments. Due to the lack of orthogonality, information redundancy of geometric moments became inevitable and image reconstruction from geometric moments was very difficult

In this paper, we use the frame of geometric moments and partial derivatives to define a kind of weighted moments, which can be named as differential moments(DMs). According to the definition of DMs and local affine differential invariants, affine weighted moment invariants(AWMIs) can be obtained easily, which use both global and local information. The experimental results show that AWMIs have good stability and distinguishability. Also, they can improve the accuracy of image retrieval.

2 Some Basic Definitions and Theorems

In order to understand the construction frame of AWMIs more clearly, we first introduce some basic definitions and theorems.

2.1 The Definition of Geometric Moments

The geometric moment of the image f(x,y) is defined by

where p,q = {0,1,2,...}, (p+q) is the order of mpq. In order to eliminate the effect of translation, central geometric moments are usually used. The central moment of the order (p+q) is defined by

2.2 Coordinate Transformation under the Affine Transform

Suppose the image f(x,y) is transformed into another image g(x′,y′) by the affine transform A and the translation T. (x′,y′) is the corresponding point of (x,y). We can get the following relationship

where A is a nonsingular matrix.

2.3 The Construction of Affine Moments Invariants

For the image f(x,y), let (xi,yi) and (xj,yj) be two arbitrary points in the domain of f(x,y). The geometric primitive proposed in [7] can be defined by

In [7], Xu and Li proved that Eq.(10) didn’t change when the image was transformed by Eq.(4). Eq.(10) is the general form of AMIs. In fact, this multiple integral can be expressed as polynomials of central geometric moments.

In addition, Olver indicated that differential invariants shown in (12)∼(16) were not independent [15]. The relationship of them was defined by

3 The Construction Frame of AWMIs

3.1 The Definition of DMs

Let f(x,y) be the differentiable function. The first-order DMs are defined by:

The second-order differential moments are defined by:

Similarly, we can construct higher-order differential moments. But considering their convenience and the accuracy of calculation, we only define the first-order and second-order DMs. Compared with the definition of geometric central moments in Eq(2), DMs are constructed by using the polynomial functions and derivative functions of f(x,y). Thus, they can represent internal information of images better.

In [6], Flusser and Suk proved that there were seven kinds of AMIs when the degree N ⩽3 and the order maxi{pi+qi} ⩽3. They are listed in the Table 1. It is important to note that u10 and u01 are always zero. Thus, AMI4 and AMI5 can’t be used as invariants. That means there are only two AMIs, {AMI2,AMI7}, when the degree N⩽3 and the order maxi{pi+qi} ⩽3.

But now, we can use Eq.(21) to construct many AWMIs. When N⩽3, maxi{pi+qi} ⩽3 and maxi{mi+ni} ⩽1, there are 8 kinds of DCores which can be constructed AWMIs. They are list in the Table 2.