In this paper, we present a hybridized discontinuous Galerkin (HDG) method for Poisson-type problems with sign-changing coefficients. We introduce a sign-changing stabilization parameter that results in a stable HDG method independent of domain geometry and the ratio of the negative and positive coefficients. Since the Poisson-type problem with sign-changing coefficients is not elliptic, standard techniques with a duality argument to analyze the HDG method cannot be applied. Hence, we present a novel error analysis exploiting the stabilized saddle-point problem structure of the HDG method. Numerical experiments in two dimensions and for varying polynomial degree verify our theoretical results. 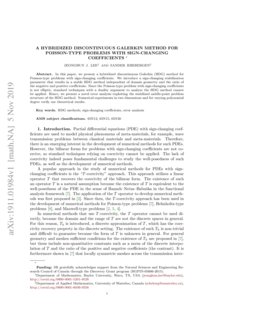 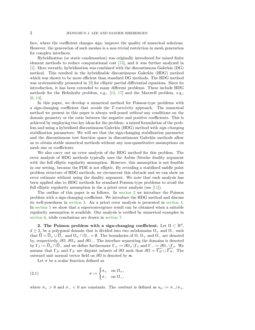 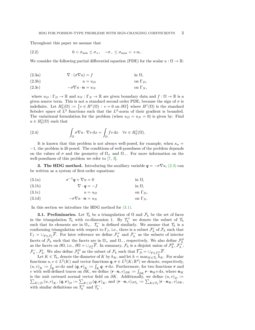 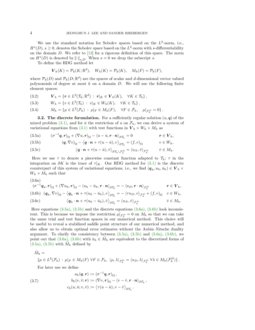 In this paper, we present a unified analysis of the superconvergence pro...
Limin Ma, et al. ∙

A generalized finite element method for problems with sign-changing coefficients

In this work, we present a new numerical method for solving the scalar t...
Patrick Ciarlet JR, et al. ∙

We introduce a homogeneous multigrid method in the sense that it uses th...
Peipei Lu, et al. ∙

Partial differential equations (PDE) with sign-changing coefficients are used to model physical phenomena of meta-materials, for example, wave transmission problems between classical materials and meta-materials. Therefore, there is an emerging interest in the development of numerical methods for such PDEs. However, the bilinear forms for problems with sign-changing coefficients are not coercive, so standard techniques relying on coercivity cannot be applied. The lack of coercivity indeed poses fundamental challenges to study the well-posedness of such PDEs, as well as the development of numerical methods.

A popular approach in the study of numerical methods for PDEs with sign-changing coefficients is the “T-coercivity” approach. This approach utilizes a linear operator T that recovers the coercivity of the bilinear form. The existence of such an operator T is a natural assumption because the existence of T is equivalent to the well-posedness of the PDE in the sense of Banach–Nečas–Babuška in the functional analysis framework [7]. The application of the T operator to develop numerical methods was first proposed in [2]. Since then, the T-coercivity approach has been used in the development of numerical methods for Poisson-type problems [7], Helmholtz-type problems [8], and Maxwell-type problems [2, 5, 4].

In numerical methods that use T-coercivity, the T operator cannot be used directly, because the domain and the range of T are not the discrete spaces in general. For this reason, Th is introduced, a discrete approximation of T, which has the coercivity recovery property in the discrete setting. The existence of such Th is non-trivial and difficult to guarantee because the form of T is unknown in general. For general geometry and meshes sufficient conditions for the existence of Th are proposed in [7]

, but these include non-quantitative constants such as a norm of the discrete interpolation of

T and the ratio of the positive and negative coefficients (the contrast). It is furthermore shown in [7] that locally symmetric meshes across the transmission interface, where the coefficient changes sign, improve the quality of numerical solutions. However, the generation of such meshes is a non-trivial restriction in mesh generation for complex interfaces.

Hybridization (or static condensation) was originally introduced for mixed finite element methods to reduce computational cost [15], and it was further analyzed in [1]. More recently, hybridization was combined with the discontinuous Galerkin (DG) method. This resulted in the hybridizable discontinuous Galerkin (HDG) method which was shown to be more efficient than standard DG methods. The HDG method was systematically presented in [9] for elliptic partial differential equations. Since its introduction, it has been extended to many different problems. These include HDG methods for the Helmholtz problem, e.g., [12, 17] and the Maxwell problem, e.g., [6, 14].

In this paper, we develop a numerical method for Poisson-type problems with a sign-changing coefficient that avoids the T-coercivity approach. The numerical method we present in this paper is always well-posed without any conditions on the domain geometry or the ratio between the negative and positive coefficients. This is achieved by employing two key ideas for the problem: a mixed formulation of the problem and using a hybridized discontinuous Galerkin (HDG) method with sign-changing stabilization parameters. We will see that the sign-changing stabilization parameter and the discontinuous test function space in discontinuous Galerkin methods allow us to obtain stable numerical methods without any non-quantitative assumptions on mesh size or coefficients.

We also carry out an error analysis of the HDG method for this problem. The error analysis of HDG methods typically uses the Aubin–Nitsche duality argument with the full elliptic regularity assumption. However, this assumption is not feasible in our setting, because the PDE is not elliptic. By revealing a stabilized saddle point problem structure of HDG methods, we circumvent this obstacle and we can show an error estimate without using the duality argument. We note that such analysis has been applied also to HDG methods for standard Poisson-type problems to avoid the full elliptic regularity assumption in the a priori error analysis (see

The outline of this paper is as follows. In Section 2 we introduce the Poisson problem with a sign-changing coefficient. We introduce the HDG method and discuss its well-posedness in Section 3. An a priori error analysis is presented in Section 4. In Section 5 we show that a superconvergence result can be obtained when a suitable regularity assumption is available. Our analysis is verified by numerical examples in Section 6, while conclusions are drawn in Section 7.

2 The Poisson problem with a sign-changing coefficient

∂Ω is denoted by n.

Let σ be a scalar function defined as

where σ+>0 and σ−<0 are constants. The contrast is defined as κσ:=σ−/σ+. Throughout this paper we assume that

We consider the following partial differential equation (PDE) for the scalar u:Ω→R: equationparentequation

where uD:ΓD→R and uN:ΓN→R are given boundary data and f:Ω→R is a given source term. This is not a standard second order PDE, because the sign of σ is indefinite. Let H10(Ω):=\cbrv∈H1(Ω):v=0 on ∂Ω where H1(Ω) is the standard Sobolev space of L2 functions such that the L2-norm of their gradient is bounded. The variational formulation for the problem (when uD=uN=0) is given by: Find u∈H10(Ω) such that

Introducing the auxiliary variable q=−σ∇u, Eq. 3 can be written as a system of first-order equations: equationparentequation

In this section we introduce the HDG method for Eq. 5.

To define the HDG method let

where Pk(D) and Pk(D;Rd) are the spaces of scalar and d-dimensional vector valued polynomials of degree at most k on a domain D. We will use the following finite element spaces:

For a sufficiently regular solution (u,q) of the mixed problem Eq. 5, and for ¯u the restriction of u on Fh, we can derive a system of variational equations from Eq. 5 with test functions in Vh×Wh×Mh as equationparentequation

Here we use τ to denote a piecewise constant function adapted to Th; τ in the integration on ∂K is the trace of τ|K. Our HDG method for Eq. 5 is the discrete counterpart of this system of variational equations, i.e., we find (qh,uh,¯uh)∈Vh×Wh×Mh such that equationparentequation

Here equations Eq. 9a, Eq. 9b and the discrete equations Eq. 10a, Eq. 10b look inconsistent. This is because we impose the restriction μ|FDh=0 on Mh so that we can take the same trial and test function spaces in our numerical method. This choice will be useful to reveal a stabilized saddle point structure of our numerical method, and also allow us to obtain optimal error estimates without the Aubin–Nitsche duality argument. To clarify the consistency between Eq. 9a, Eq. 9b and Eq. 10a, Eq. 10b, we point out that Eq. 10a, Eq. 10b with ¯uh∈~Mh are equivalent to the discretized forms of Eq. 9a, Eq. 9b with ~Mh defined by

For later use we define

Then the sum of the left-hand sides of Eq. 10 can be rewritten as

For brevity, but without loss of generality, we assume uD=uN=0 and ΓD≠∅ in the remainder of this paper.

In the following lemma we prove well-posedness of the HDG method Eq. 10.

be the characteristic function that has the value 1 in domain

Similarly, the evaluation of Eq. 10 with the second components of the above test functions gives

Since σ−1 and τ are positive and negative on Ω+ and Ω−, respectively, we can conclude that qh=0 on Ω and uh=¯uh on F+h∪F−h∪Fih. This also implies that uh is continuous on Ω.

We consider the following norms on Vh and Wh×Mh:

where |τ| is the absolute value of τ. Additionally, we define Xh:=Vh×Wh×Mh with norm

Furthermore, in the remainder of this paper we let C>0 be a constant independent of the mesh size h.

Consider now a decomposition v=v0+vm with vm=χΩ1|Ω|∫Ωv\difx where |Ω| is the Lebesgue measure of Ω, and where v0 is the component of v with mean-value zero. It is clear that \normv0L2(Ω)+\normvmL2(Ω)≤C\normvL2(Ω). As just noted, there exists w0∈H10(Ω;Rd) such that ∇⋅w0=v0 and \normw0H1(Ω)≤C\normv0L2(Ω). Since Ω is a polygonal/polyhedral domain, one can find a function ϕ∈H1/2(∂Ω) whose support resides on ΓD, ∫ΓDϕ⋅n\difs=c0>0, and \normϕH12(∂Ω)=1. We can find ϕ0, a renormalization of ϕ, satisfying ∫ΓDϕ0⋅n\difs=∫Ωvm\difx, and it holds that

We first prove the following weak inf-sup condition: There exist C0,C1>0 independent of h such that

We show this by proving an equivalent condition, i.e., there exist C′0,C′1,C′2>0 independent of h such that for any 0≠(z,¯z)∈Wh×Mh there exists r∈Vh such that \normrVh≤C′2\normzΩ and

By Lemma 2 there exists w∈H1(Ω;Rd) with w⋅n|ΓN=0 such that ∇⋅w=−z and \normw1,Ω≤CΩ\normzΩ with CΩ depending only on Ω and ΓD. We use Πhw to denote the element-wise L2 orthogonal projection of w into Vh. It then holds that

where the third equality holds because w⋅n and ¯z are single-valued on facets, ¯z=0 on ΓD by the definition of Mh, and w⋅n=0 on ΓN.

The element-wise trace inequality and the Cauchy-Schwarz inequality give

Finally, it is not difficult to show, by the choice of (r,v,¯v), that

In this section we present the a priori error estimates of our HDG method. For this we recall an interpolation result (cf. [10, Theorem 2.1]): For K∈Th suppose that τ|∂K is a piecewise constant function which is nonnegative if K⊂Ω+ and nonpositive if K⊂Ω− such that τ|∂K≠0. Then there exists a bounded interpolation operator Π:=(ΠV,ΠW) from H1(K;Rd)×H1(K) to Vh(K)×Wh(K) such that equationparentequation

where F∗ is the face where τmaxK is attained, and the implicit constants are independent of K and τ. We remark that the proof in [10] is only for nonnegative τ. The proof, however, can easily be adapted to nonpositive τ, so we omit its proof here. We will also require PM, the facet-wise L2 projection from L2(Fh∖FDh) to Mh.

For brevity of notation, we will denote the difference between an unknown ϕ and its approximation ϕh by eϕ:=ϕ−ϕh. It will be convenient to also split the error into interpolation and approximation errors: