A Hybrid Scattering Transform for Signals with Isolated Singularities

The scattering transform is a wavelet-based model of Convolutional Neural Networks originally introduced by S. Mallat. Mallat's analysis shows that this network has desirable stability and invariance guarantees and therefore helps explain the observation that the filters learned by early layers of a Convolutional Neural Network typically resemble wavelets. Our aim is to understand what sort of filters should be used in the later layers of the network. Towards this end, we propose a two-layer hybrid scattering transform. In our first layer, we convolve the input signal with a wavelet filter transform to promote sparsity, and, in the second layer, we convolve with a Gabor filter to leverage the sparsity created by the first layer. We show that these measurements characterize information about signals with isolated singularities. We also show that the Gabor measurements used in the second layer can be used to synthesize sparse signals such as those produced by the first layer. 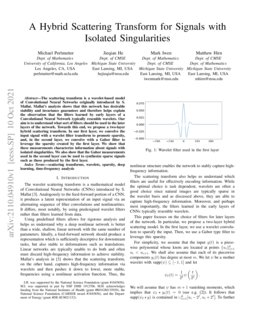 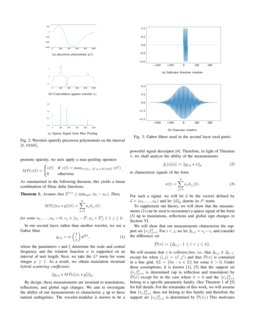 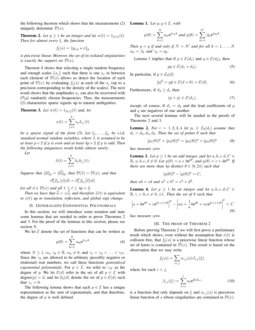 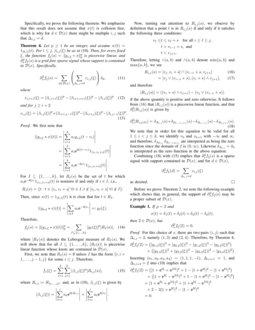 In this paper, we apply the scattering transform (ST), a nonlinear map b...
Naoki Saito, et al. ∙

We propose to use the Generalized Morse Wavelets (GMWs) instead of commo...
Wai Ho Chak, et al. ∙

Compressing the Input for CNNs with the First-Order Scattering Transform

We study the first-order scattering transform as a candidate for reducin...
Edouard Oyallon, et al. ∙

In this paper we explore tying together the ideas from Scattering Transf...
Fergal Cotter, et al. ∙

We use the scattering network as a generic and fixed ini-tialization of ...
Edouard Oyallon, et al. ∙

The wavelet scattering transform is a mathematical model of Convolutional Neural Networks (CNNs) introduced by S. Mallat[3]. Analogously to the feed-forward portion of a CNN, it produces a latent representation of an input signal via an alternating sequence of filter convolutions and nonlinearities. It differs, most notably, by using predesigned wavelet filters rather than filters learned from data.

Using predefined filters allows for rigorous analysis and helps us understand why a deep nonlinear network is better than a wide, shallow, linear network with the same number of parameters. Ideally, a feed-forward network should produce a representation which is sufficiently descriptive for downstream tasks, but also stable to deformations such as translations. Linear networks are typically unable to do both and often must discard high-frequency information to achieve stability. Mallat’s analysis in [3]

The scattering transform also helps us understand which filters are useful for effectively encoding information. While the optimal choice is task dependent, wavelets are often a good choice since natural images are typically sparse in the wavelet basis and as discussed above, they are able to capture high-frequency information. Moreover, and perhaps most importantly, the filters learned in the early layers of CNNs typically resemble wavelets.

This paper focuses on the choice of filters for later layers of the network. In particular, we propose a two-layer hybrid scattering model. In the first layer, we use a wavelet convolution to sparsify the input. Then, we use a Gabor type filter to leverage this sparsity.

For simplicity, we assume that the input y(t) is a piecewise polynomial whose knots are located at points {ui}ki=1 ui<ui+1. We shall also assume that each of its piecewise components yi(t) has degree at most m. We let ψ be a mother wavelet with supp(ψ)⊆[−1,1] and let

We will assume that ψ has m+1

vanishing moments, which implies that

. To further promote sparsity, we next apply a max-pooling operator:

As summarized in the following theorem, this yields a linear combination of Dirac delta functions.

In our second layer, rather than another wavelet, we use a Gabor filter

where the parameters s and ξ determine the scale and central frequency and the window function w is supported on an interval of unit length. Next, we take the Lp norm for some integer p≥1. As a result, we obtain translation invariant hybrid scattering coefficients

By design, these measurements are invariant to translations, reflections, and global sign changes. We aim to investigate the ability of our measurements to characterize y up to these natural ambiguities. The wavelet-modulus is known to be a powerful signal descriptor[4]. Therefore, in light of Theorem 1, we shall analyze the ability of the measurements

to characterize signals of the form

For such a signal, we will let →a

be the vector] defined by

To supplement our theory, we will show that the measurements (2) can be used to reconstruct a sparse signal of the form (3) up to translations, reflections and global sign changes in Section VI.

We will show that our measurements characterize the support set {vj}kj=1. For i<j, we let Δi,j=vj−vi and consider the difference set

We will assume that x is collision free, i.e., that Δi,j≠Δi′,j′ except for when (i,j)=(i′,j′) and that D(x) is contained in a fine grid, hZ={hn:n∈Z} for some h>0. Under these assumptions, it is known [1, 5] that the support set {vj}kj=1 is determined (up to reflection and translation) by D(x) except for in the case where k=6 and the {vj}6j=1 belong to a specific parametric family. (See Theorem 1 of [5] for full details. For the remainder of this work, we will assume that {vj}kj=1 does not belong to this family and therefore the support set {vj}kj=1 is determined by D(x).) This motivates the following theorem which shows that the measurements (2) uniquely determine D(x).

is piecewise linear. Morover, the set of its isolated singularities is exactly the support set D(x).

Theorem 4 shows that selecting a single random frequency and enough scales {sj} such that there is one sj in between each element of D(x) allows us detect the location of each point of D(x) by evaluating fξ(s) at each of the sj (up to a precision corresponding to the density of the scales). The next result shows that the amplitudes aj can also be recovered with O(p) randomly chosen frequencies. Thus, the measurements (2) characterize sparse signals up to natural ambiguities.

is odd. Then the following uniqueness result holds almost surely:

Then we have that →˜a=±→˜a, and therefore ˜x(t) is equivalent to x(t) up to translation, reflection, and global sign change.

In this section, we will introduce some notation and state some lemmas that are needed in order to prove Theorems 2 and 3. For the proof of the lemmas in this section, please see section V.

where N≥1, αk,γk∈R, αk≠0, and γ1<γ2<…<γN. Since the γk are allowed to be arbitrary (possibly negative or irrational) real numbers, we call these functions generalized exponential polynomials. For p∈E, we refer to γN as the degree of p. We let E(d) refer to the set of all p∈E with degree(p)=d, and let E0(d) denote the set of p∈E(d) such that γ1=0.

The following lemma shows that each p∈E has a unique representation as the sum of exponentials, and that therefore, the degree of p is well defined.

except, of course, if d1=d2 and the lead coefficients of p and q are negatives of one another.

The next several lemmas will be needed in the proofs of Theorems 2 and 3.

Iii The proof of Theorem 2

Before proving Theorem 2 we will first prove a preliminary result which shows, even without the assumption that x(t) is collision free, that fξ(s) is a peicewise linear function whose set of knots is contained in D(x). This result is based on the observation that we may write

where for each i<j,

is a function that only depends on ξ and αi,j(s) is piecewise linear function of s whose singularities are contained in D(x).

Specifically, we prove the following theorem. We emphasize that this result does not assume that x(t) is collision free, which is why for d∈D(x) there might be multiple i,j such that Δi,j=d.

We first note that

where |RI(s)| denotes the Lebesgue measure of RI(s). We will show that for all I⊆{1,…,k}, |RI(s)| is piecewise linear function whose knots are contained in D(x).

Now, turning our attention to Ri,j(s), we observe by definition that a point t is in Ri,j(s) if and only if it satisfies the following three conditions:

if the above quantity is positive and zero otherwise. It follows from (???) that |Ri,j(s)| is a piecewise linear function, and that ∂2s|Ri,j(s)| is given by

Before we prove Theorem 2, we note the following example which shows that, in general, the support of ∂2sfξ(s) may be a proper subset of D(x).

The last inequality follows from repeatedly applying the the trigonometric identities sin2(θ)+cos2(θ)=1 and cos(θ)=cos(2θ)cos(θ)+sin(2θ)sin(θ). ∎

We shall now prove Theorem 2.

The Proof of Theorem 2.

Observe that βi,j(ξ) are generalized exponential Laurent polynomials of the form introduced in Section II, and in particular, βi,j∈E0(Δi,j). Therefore, when j≥i+2, it follows from Lemma 2 that ci,j(ξ) vanishes on a set of measure zero since if ci,j(ξ)=0 we have

Thus, ci,i+1(ξ) vanishes on a set of measure zero since the left-hand side of the above equation is a trigonometric polynomial.

Iv The Proof of Theorems 3

is collision free, with probability one, each of the

be a signal D(˜x)=D(x), ∥→a∥p=∥→˜a∥p, and ∂2sfξℓ[x](d)=∂2sfξℓ[˜x](d) for all d∈D(x) and for all 1≤ℓ≤L−1. Note that ˜x(t) depends on ξ1,…,ξL−1, but is independent of ξL. By assumption that x(t) and ˜x(t) are collision free (and also, as discussed in the Section I, we assume that we are not in the special case where k=6 and the {vj}kj=1 belong to a special parametrized family). Therefore, the fact that D(x)=D(˜x) implies that the support sets of x and ˜x are equivalent up to translation and reflection, so we may assume without loss of generality that Δi,j(x)=Δi,j(˜x)\eqqcolonΔi,j for all 1≤i≤j≤k.

We will show that →˜a must be given by

Then, we will show that, if c satisfies (21), but c≠±1, then with probability one

Therefore, ξ1Δi,i+1,…,ξL−1Δi,i+1 constitute L−1 solutions, which are distinct modulo 2π, to the equation

which are distinct modulo 2π. Using the fact that

Thus, since L−1>p=2m, this implies that h(θ) must be uniformly zero. In particular, setting the lead coefficient equal to zero implies

for all 1≤i≤k−1. Using the binomial theorem and setting the cos(θ) coefficient equal to zero gives