Image compression is an essential approach for decreasing the size in bytes of the image without deteriorating the quality of it. Typically, classic algorithms are used but recently deep-learning has been successfully applied. In this work, is presented a deep super-resolution work-flow for image compression that maps low-resolution JPEG image to the high-resolution. The pipeline consists of two components: first, an encoder-decoder neural network learns how to transform the downsampling JPEG images to high resolution. Second, a combination between Generative Adversarial Networks (GANs) and reinforcement learning Actor-Critic (A3C) loss pushes the encoder-decoder to indirectly maximize High Peak Signal-to-Noise Ratio (PSNR). Although PSNR is a fully differentiable metric, this work opens the doors to new solutions for maximizing non-differential metrics through an end-to-end approach between encoder-decoder networks and reinforcement learning policy gradient methods. 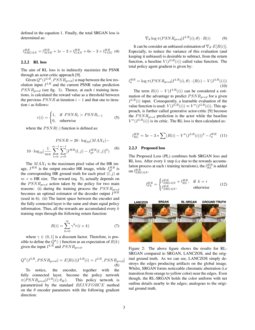 Image compression with deep learning systems is an active area of research that recently has becomes very compelling respect to the modern natural images codecs as JPEG2000, [1], BPG [2] WebP currently developed by Google\textregistered [3]

. The new deep learning methods are based on an auto-encoder architecture where the features maps, generate from a Convolutional Neural Networks (CNN) encoder, are passed through a quantizer to create a binary representation of them, and subsequently given in input to a CNN decoder for the final reconstruction. In this view, several encoders and decoders models have been suggested as a ResNet

[7]. In contrast, this paper proposes a super-resolution approach, build on a modifying version of SRGAN [8], where downsampling JPEG images are converted at High Resolution (HR) images. Hence, in order to improve the final PSNR results, a Reinforcement Learning (RL) approach is used to indirectly maximize the PSNR function with an A3C policy [9] end-to-end joined with SRGAN. The main contributions of this works are: (i) Propose a compression pipeline based on JPEG image downsampling combined with a super-resolution deep network. (ii) Suggest a new way for maximizing not differentiable metrics through RL. However, even if the PSNR metric is a fully differentiable function, the proposed method could be used in future applications for non-euclidean distance such as in the Dynamic Time Warping (DTW) algorithms [10].

In this section is given a more formal description of the suggested system which includes: the network architecture and the losses used for training.

The architecture consists of three main blocks: encoder, decoder and a discriminator (Figure 1). The ILR is the low-resolution (LR) input image (i.e compressed with a JPEG encoder) of size rW×rH×C ( i.e with C color channels and W, H the image width and height); where a bicubic downsampling operation with factor r is applied. While the output is an HR image defined as IHR.

The encoder is basically a ResNet [4], where the first convolution block has a kernel size of 9×9 and 64 Feature Maps (FM) with a ParametricReLUactivation function. Then, five Residual Blocks (RB) are stacked together. Each of those RB consists of two convolution layers with kernel size 3×3 and 64 FM followed by Batch-Normalisation (BN) and ParametricReLU. After that, a final convolution block of 3×3 and 64 FM are repeated. However, the encoder is also joint with a fully connected layer and, at each i training iterations, produces an action prediction of the actual PSNR; together with a value function Vπ(IHR(i)) (i.e explained in 2.2.2 section).

The decoder is fundamentally another deep network that allows increasing the resolution of the output encoder with eight subpixel layers [11].

The encoder, joint with the decoder, define a generator H(⋅)θ, where θ=[wL;bL] are the weight and biases parameters for each L-layers for the specific network. A third network D(⋅)θ, called discriminator, is also optimized concurrently with H(⋅)θ for solving the following adversarial min-max problem:

The idea behind lHRGAN loss is to train a generative model H(⋅)θ to fool D(⋅)θ. Indeed, the discriminator is trained to distinguish super-resolution images IHR, generated by H(⋅)θ, from those of the training dataset. In this way, the discriminator is increasingly struggled to distinguish the IHR images (generated by H(⋅)θ) from the real ones and consequently driving the generator to produce results closer to the HR training images. Then, in the proposed model, the discriminator D(⋅)θ is parameterized through a VGG network with LeakyReLU activation (α=0.2)

H(⋅)θ generator. Here, the paragraph is logically divided into three losses: the SRGAN loss, the RL loss, and the proposed loss.

The SRGAN loss is determined as a combination of three other separate losses: MSE loss, VGG loss, and GANs loss. Where the MSE loss is defined as:

It represents the most utilized loss in super-resolution methods but remarkably sensitive to high-frequency peak with smooth textures [8] . For this reason, is used a VGG loss [8]

Where W and H are the dimension of IHR image in the MSE loss. Whilst, for the VGG loss, they are the Ω(⋅) output FM dimensions. While the GANs loss is previously defined in the equation 1. Finally, the total SRGAN loss is determined as:

The aim of RL loss is to indirectly maximize the PSNR through an actor-critic approach [9]. Given Qπ(ILR,PSNRpred) a map between the low resolution input ILR and the current PSNR value prediction PSNRpred (see fig. 1). Thence, at each i training iterations, is calculated the reward value as a threshold between the previous PSNR at iteration i−1 and that one to iteration i as follows:

where the PSNR(⋅) function is defined as:

The MAXI is the maximum pixel value of the HR image, IHR is the output encoder HR image, while IHRgt is the corresponding HR ground truth for each pixel (l,j) at m×n HR size. The reward (eq. 5), actually depends on the PSNRpred action taken by the policy for two main reasons: (i) during the training process the PSNRpred

becomes an optimal estimator of the decoder output

IHR (used in 6). (ii) The latent space between the encoder and the fully connected layer is the same and share equal policy information. Thus, all the rewards are accumulated every k training steps through the following return function:

where γ∈(0,1] is a discount factor. Therefore, is possible to define the Qπ(⋅) function as an expectation of R(k) given the input ILR and PSNRpred.

To notice, the encoder, together with the fully connected layer, become the policy network π(PSNRpred|ILR(i);θH). This policy network is parametrized by the standard REINFORCE method on the θ encoder parameters with the following gradient direction:

It can be consider an unbiased estimation of

. Especially, to reduce the variance of this evaluation (and keeping it unbiased) is desirable to subtract, from the return function, a baseline

V(ILR(i)) called value function. The total policy agent gradient is given by:

The term R(i)−V(ILR(i)) can be considered a estimation of the advantage to predict PSNRpred for a given ILR(i) input. Consequently, a learnable evaluation of the value function is used: V(ILR(i))≈Vπ(ILR(i)). This approach, is further called generative actor-critic [9] becouse the PSNRpred prediction is the actor while the baseline Vπ(ILR(i)) is its critic. The RL loss is then calculated as:

The Proposed Loss (PL) combines both SRGAN loss and RL loss. After every k step (i.e due to the rewards accumulation process at each i training iterations), the lHRRL is added on lHRSRGAN.

In this section is evaluate the method suggested. The dataset used is the CLIC compression dataset [12] correspondingly divided in the train, valid and test sets. The train has 1634 HR images, valid 102 and test 330

. The evaluation metrics used are the PSNR and MS-SSIM

[13] for both valid and test. An ADAM optimizer is used with a learning rate of 1e−3 within 22876 model iterations until convergence. The Reinforcement Learning SRGAN (RL-SRGAN) is compared with the SRGAN model work [8]

and the Lanczos resampling (i.e a smooth interpolation through a convolution between the

ILR image and a stretched sinc(⋅) function). Finally, the table 1 highlights that the PSNR difference between LANCZOS upsampling and RL-SRGAN is 0.9, while of 0.19 with SRGAN; whereas the MS-SSIM remains constant between RL-SRGAN and SRGAN for the validation set. This also shows a better accuracy for the RL-SRGAN model. While, for the tests, RL-SRGAN achieve 20.06 of PSNR and 0.7503 of MS-SSIM. Furthermore, the compression rate for the validation set images is 3.812.623 bytes respect 362.236.068 bytes of original HR dataset. While for the test set images is 5.228.411 bytes in contrast with the 5.882.850.012 bytes of the original one. That makes the method a good trade-off between compression capacity and acceptable PSNR.

A modified version of SRGAN is suggested where an A3C method is joined with GANs. Sadly, the proposed method has strong limitations due to the drastic downsampling of the input JPEG image. This downsampling causes loss of information, difficult to recover from the super-resolution network, which leads to lower results in PSNR and MS-SSIM on the test set (i.e 20.06 and 0.7503 respectively). Despite, the results (table 1) emphasize slight improvement performances for RL-SRGAN related within SRGAN and a baseline LANCZOS upsampling filter. However, the proposed method compresses all test files in a parsimonious way respect to the challenge methods. Indeed, the total dimension of the compression test set is of 5236870 bytes respect to 15748677 bytes of CLIC 2019 winner. Finally, a new method for maximizing non-differentiable functions is here suggested through deep reinforcement learning technique.