This paper develops a Hoeffding inequality for the partial sums ∑_k=1^n f (X_k), where {X_k}_k ∈Z_> 0 is an irreducible Markov chain on a finite state space S, and f : S → [a, b] is a real-valued function. Our bound is simple, general, since it only assumes irreducibility and finiteness of the state space, and powerful. In order to demonstrate its usefulness we provide two applications in multi-armed bandit problems. The first is about identifying an approximately best Markovian arm, while the second is concerned with regret minimization in the context of Markovian bandits. 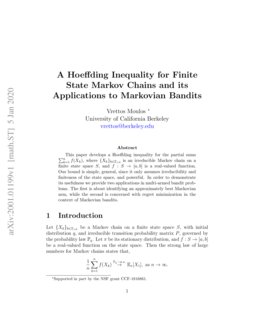 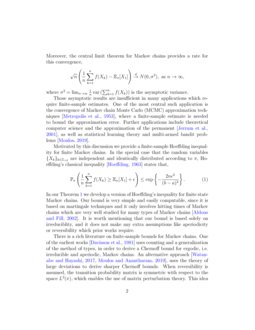 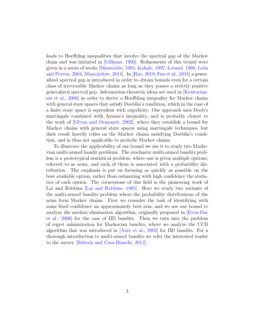 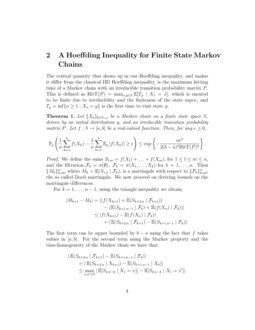 Let {Xk}k∈Z>0 be a Markov chain on a finite state space S, with initial distribution q

P, governed by the probability law Pq. Let π be its stationary distribution, and f:S→[a,b]

be a real-valued function on the state space. Then the strong law of large numbers for Markov chains states that,

Moreover, the central limit theorem for Markov chains provides a rate for this convergence,

is the asymptotic variance.

Those asymptotic results are insufficient in many applications which require finite-sample estimates. One of the most central such application is the convergence of Markov chain Monte Carlo (MCMC) approximation techniques

, as well as statistical learning theory and multi-armed bandit problems

Motivated by this discussion we provide a finite-sample Hoeffding inequality for finite Markov chains. In the special case that the random variables

In our Theorem 1 we develop a version of Hoeffding’s inequality for finite state Markov chains. Our bound is very simple and easily computable, since it is based on martingale techniques and it only involves hitting times of Markov chains which are very well studied for many types of Markov chains [Aldous and Fill, 2002]. It is worth mentioning that our bound is based solely on irreduciblity, and it does not make any extra assumptions like aperiodicity or reversibility which prior works require.

There is a rich literature on finite-sample bounds for Markov chains. One of the earliest works [Davisson et al., 1981] uses counting and a generalization of the method of types, in order to derive a Chernoff bound for ergodic, i.e. irreducible and aperiodic, Markov chains. An alternative approach [Watanabe and Hayashi, 2017, Moulos and Anantharam, 2019], uses the theory of large deviations to derive sharper Chernoff bounds. When reversibility is assumed, the transition probability matrix is symmetric with respect to the space L2(π), which enables the use of matrix perturbation theory. This idea leads to Hoeffding inequalities that involve the spectral gap of the Markov chain and was initiated in [Gillman, 1993]. Refinements of this bound were given in a series of works [Dinwoodie, 1995, Kahale, 1997, Lezaud, 1998, León and Perron, 2004, Miasojedow, 2014]. In [Rao, 2019, Fan et al., 2018] a generalized spectral gap is introduced in order to obtain bounds even for a certain class of irreversible Markov chains as long as they posses a strictly positive generalized spectral gap. Information-theoretic ideas are used in [Kontoyiannis et al., 2006] in order to derive a Hoeffding inequality for Markov chains with general state spaces that satisfy Doeblin’s condition, which in the case of a finite state space is equivalent with ergodicity. Our approach uses Doob’s martingale combined with Azuma’s inequality, and is probably closest to the work of [Glynn and Ormoneit, 2002], where they establish a bound for Markov chains with general state spaces using martingale techniques, but their result heavily relies on the Markov chains satisfying Doeblin’s condition, and is thus not applicable to periodic Markov chains.

To illustrate the applicability of our bound we use it to study two Markovian multi-armed bandit problems. The stochastic multi-armed bandits problem is a prototypical statistical problem, where one is given multiple options, referred to as arms, and each of them is associated with a probability distribution. The emphasis is put on focusing as quickly as possible on the best available option, rather than estimating with high confidence the statistics of each option. The cornerstone of this field is the pioneering work of Lai and Robbins

[Lai and Robbins, 1985]. Here we study two variants of the multi-armed bandits problem where the probability distributions of the arms form Markov chains. First we consider the task of identifying with some fixed confidence an approximately best arm, and we use our bound to analyze the median elimination algorithm, originally proposed in [Even-Dar et al., 2006] for the case of IID bandits. Then we turn into the problem of regret minimization for Markovian bandits, where we analyze the UCB algorithm that was introduced in [Auer et al., 2002] for IID bandits. For a thorough introduction to multi-armed bandits we refer the interested reader to the survey [Bubeck and Cesa-Bianchi, 2012].

The central quantity that shows up in our Hoeffding inequality, and makes it differ from the classical IID Hoeffding inequality, is the maximum hitting time of a Markov chain with an irreducible transition probability matrix P. This is defined as HitT(P)=maxx,y∈SE[Ty∣X1=x], which is ensured to be finite due to irreduciblity and the finiteness of the state sapce, and Ty=inf{n≥1:Xn=y} is the first time to visit state y.

Let {Xk}k∈Z>0 be a Markov chain on a finite state space S, driven by an initial distribution q, and an irreducible transition probability matrix P. Let f:S→[a,b] be a real-valued function. Then, for any ϵ≥0,

For k=1,…,n−1, using the triangle inequality we obtain,

The first term can be upper bounded by b−a using the fact that f takes values in [a,b]. For the second term using the Markov property and the time-homogeneity of the Markov chain we have that,

We now use a hitting time argument. Due to the fact that 0≤f(x)−a≤b−a, for all x∈S, we have the following pointwise inequality,

Taking E[⋅∣X1=x′]-expectations, and using the strong Markov property we obtain,

For k=0 by repeating the same steps we have that,

and Theorem 1 takes the form,

is odd, then the Markov chain is aperiodic, while if

m is even, then the Markov chain has period 2. Then,

and Theorem 1 takes the form,

By substituting f with −f in Theorem 1 we obtain the following bound for the lower tail,

and combining the upper and lower tail bounds we obtain the following two-sided bound,

Note that when the Markov chain is initialized with its stationary distribution π this takes the form,

Observe that the technique used to establish Theorem 1 is limited to Markov chains with a finite state space S. Indeed, if {Xk}k∈Z>0 is a Markov chain on a countably infinite state space S with an irreducible and positive recurrent transition probability matrix P and a stationary distribution π, then we claim that,

from which it follows that supx,y∈SE[Ty∣X1=x]=∞, due to the fact that ∑y∈Sπ(y)=1 and S is countably infinite. The aforementioned inequality can be established as follows.

There are K≥2 arms, and each arm a∈[K]={1,…,K} is associated with a parameter θa∈R which uniquely encodes111R and the set of |S|×|S| irreducible transition probability matrices have the same cardinality, and hence there is a bijection between them. an irreducible transition probability matrix Pθa. We will denote the overall parameter configuration of all K arms with θ=(θ1,…,θK)∈RK. Arm a evolves according to the stationary Markov chain, {Xan}n∈Z>0, driven by the irreducible transition probability matrix Pθa which has a unique stationary distribution πθa, so that Xa1∼πθa. There is a common reward function f:S→[c,d] which generates the reward process {Yan}n∈Z>0={f(Xan)}n∈Z>0. The reward process, in general, is not going to be a Markov chain, unless f is injective, and it will have more complicated dependencies than the underlying Markov chain. Each time that we select arm a, this arm evolves by one transition and we observe the corresponding sample from the reward process {Yan}n∈Z>0, while all the other arms stay rested.

The stationary reward of arm a is μ(θa)=∑x∈Sf(x)πθa(x). Let μ∗(θ)=maxa∈[K]μ(θa) be the maximum stationary mean, and for simplicity assume that there exists a unique arm, a∗(θ), attaining this maximum stationary mean, i.e. {a∗(θ)}=argmaxa∈[K]μ(θa). In the following sections we will consider two objectives: identifying an ϵ best arm with some fixed confidence level δ using as few samples as possible, and minimizing the expected regret given some fixed horizon T.

In the approximate best arm identification problem, we are given an approximation accuracy ϵ>0, and a confidence level δ∈(0,1). Our goal is to come up with an adaptive algorithm A which collects a total of N samples, and returns an arm ^a that is within ϵ from the best arm, a∗(θ), with probability at least 1−δ, i.e.

Such an algorithm is called (ϵ,δ)-PAC (probably approximately correct).

We condition on the value of Ar. If |Ar|=1, then the claim is trivially true, so we only consider the case |Ar|≥2. Let μ∗r=maxa∈Arμ(θa), and a∗r∈argmaxa∈Ar:μ(θa)=μ∗r¯Ya[r]. We consider the following set of bad arms,

In order to upper bound the latter fix b∈Ar and write,

where in the last inequality we used Theorem 1. Now via Markov’s inequality this yields,

Furthermore, Remark 1 gives that for any a∈Ar,

With (2) in our possession, the fact that median elimination is (ϵ,δ)-PAC follows through a union bound,

Regarding the sample complexity, we have that the total number of samples is at most,

Our device to solve the regret minimization problem is an adaptive allocation rule, ϕ={ϕt}t∈Z>0, which is a sequence of random variables where ϕt∈[K] is the arm that we select at time t. Let Na(t)=∑ts=1I{ϕs=a}, be the number of times we selected arm a up to time t. Our decision, ϕt, at time t is based on the information that we have accumulated so far. More precisely, the event {ϕt=a} is measurable with respect to the σ-field generated by the past decisions ϕ1,…,ϕt−1, and the past observations {X1n}N1(t−1)n=1,…,{XKn}NK(t−1)n=1.

Given a time horizon T, and a parameter configuration θ, the expected regret incurred when the adaptive allocation rule ϕ is used, is defined as,

where Δb(θ)=μ∗(θ)−μ(θb). Our goal is to come up with an adaptive allocation rule that makes the expected regret as small as possible.

There is a known asymptotic lower bound on how much we can minimize the expected regret. Any adaptive allocation rule that is uniformly good across all parameter configurations should satisfy the following instance specific, asymptotic regret lower bound (see [Anantharam et al., 1987] for details),

Pθ and Pλ, given by,

Here we utilize our Theorem 1 to provide a finite-time analysis of the β-UCB adaptive allocation rule for Markovian bandits, which is order optimal. The β-UCB adaptive allocation rule, is a simple and computationally efficient index policy based on upper confidence bounds which was initially proposed in [Auer et al., 2002] for IID bandits. It has already been studied in the context of Markovian bandits in [Tekin and Liu, 2010], but in a more restrictive setting under the further assumptions of aperiodicity and reversibility due the use of the bounds from [Gillman, 1993, Lezaud, 1998].

Fix b≠a∗(θ), and observe that,

In addition, using Theorem 1, we obtain,

Similarly we can see that,

The conclusion now follows by putting everything together and using the integral estimate,

We would like to thank Satish Rao for many helpful discussions. This research was supported in part by the NSF grant CCF-1816861.