Theorem proving is one of the oldest applications which require heuristics to prune the search space. Invertible proof procedures has been the major tool. In this paper, we present a novel and powerful heuristic called nongshim which can be seen as an underlying principle of invertible proof procedures. Using this heuristic, we derive an invertible sequent calculus<cit.> from sequent calculus for propositional logic. 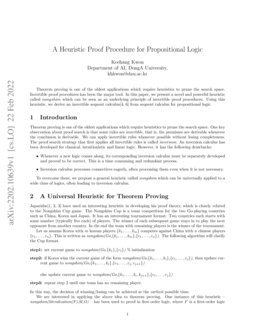 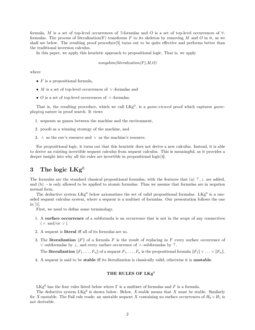 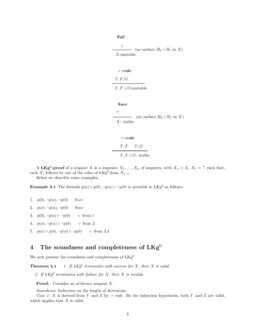 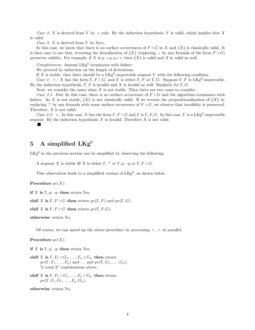 Theorem Proving Based on Semantics of DNA Strand Graph

Theorem proving is one of the oldest applications which require heuristics to prune the search space. One key observation about proof search is that some rules are invertible, that is, the premisses are derivable whenever the conclusion is derivable. We can apply invertible rules whenever possible without losing completeness. The proof search strategy that first applies all invertible rules is called inversion. An inversion calculus has been developed for classical, intuitionistic and linear logic. However, it has the following drawbacks:

To overcome these, we propose a general heuristic called nongshim which can be universally applied to a wide class of logics, often leading to inversion calculus.

2 A Universal Heuristic for Theorem Proving

Japaridze[1, 2, 3] have used an interesting heuristic in developing his proof theory, which is closely related to the Nongshim Cup game. The Nongshim Cup is a team competition for the two Go-playing countries such as China, Korea and Japan. It has an interesting tournament format: Two countries each starts with some number (typically five each) of players. The winner of each subsequent game stays in to play the next opponent from another country. In the end the team with remaining players is the winner of the tournament.

Let us assume Korea with m korean players {k1,…,km} competes against China with n chinese players {c1,…,cn}. This is written as nongshim(Go,{k1,…,km},{c1,…,cn}). The following algorithm will clarify the Cup format.

repeat step 2 until one team has no remaining player.

In this way, the decision of winning/losing can be achieved at the earliest possible time.

We are interested in applying the above idea to theorem proving. One instance of this heuristic – nongshim(literalization(F),M,O) – has been used to proof in first-order logic, where F is a first-order logic formula, M is a set of top-level occurrences of ∃-formulas and O is a set of top-level occurrences of ∀-formulas. The process of literalization(F) transforms F to its skeleton by removing M and O in it, as we shall see below. The resulting proof procedure[5] turns out to be quite effective and performs better than the traditional inversion calculus.

In this paper, we apply this heuristic approach to propositional logic. That is, we apply

That is, the resulting procedure, which we call LKg0, is a game-viewed proof which captures game-playing nature in proof search. It views

The formulas are the standard classical propositional formulas, with the features that (a) ⊤,⊥ are added, and (b) ¬ is only allowed to be applied to atomic formulas. Thus we assume that formulas are in negation normal form.

The deductive system LKg0 below axiomatizes the set of valid propositional formulas. LKg0 is a one-sided sequent calculus system, where a sequent is a multiset of formulas. Our presentation follows the one in [1].

First, we need to define some terminology.

LKg0 has the four rules listed below where Γ is a multiset of formulas and F is a formula.

The deductive system LKg0 is shown below. Below, X:stable means that X must be stable. Similarly for X:unstable. The Fail rule reads: an unstable sequent X containing no surface occurrences of H0\small∨H1 is not derivable.

Below we describe some examples.

4 The soundness and completeness of LKg0

We now present the soundness and completeness of LKg0.

Soundness: Induction on the length of derivatons.

Case 1: X is derived from Y and Z by \small∧-rule. By the induction hypothesis, both Y and Z are valid, which implies that X is valid.

Case 2: X is derived from Y by \small∨-rule. By the induction hypothesis, Y is valid, which implies that X is valid.

In this case, we know that there is no surface occurrences of F\small∧G in X and ∥X∥ is classically valid. It is then easy to see that, reversing the literalization of ∥X∥ (replacing ⊥ by any formula of the form F\small∨G) preserves validity. For example, if X is p\small→p,q\small% ∨r, then ∥X∥ is valid and X is valid as well.

We proceed by induction on the length of derivations.

If X is stable, then there should be a LKg0-unprovable sequent Y with the following condition.

Next, we consider the cases when X is not stable. Then there are two cases to consider.

Case 2.1: Fail: In this case, there is no surface occurrence of F\small∨G and the algorithm terminates with failure. As X is not stable, ∥X∥ is not classically valid. If we reverse the propositionalization of ∥X∥ by replacing ⊤ by any formula with some surface occurrence of F\small∧G, we observe that invalidity is preserved. Therefore, X is not valid.

Case 2.2: \small∨: In this case, X has the form Γ,F\small∨G and Y is Γ,F,G. In this case, Y is a LKg0-unprovable sequent. By the induction hypothesis, Y is invalid. Therefore X is not valid.

LKg0 in the previous section can be simplified by observing the following:

This observation leads to a simplified version of LKg0, as shown below:

Of course, we can speed up the above procedure by processing \small∨,\small∧ in parallel.