We design a graph-based framework for the visualisation and analysis of obligations in access control policies. We consider obligation policies in CBACO, the category-based access control model, which has been shown to subsume many of the most well known access control such as MAC, DAC, RBAC. CBACO is an extension of the CBAC metamodel that deals with obligations. We describe the implementation of the proposed model in PORGY, a strategy driven graph-rewriting tool, based on the theory of port-graphs. CBACO policies allow for dynamic behavior in the modelled systems, which is implemented using the strategy language of PORGY. 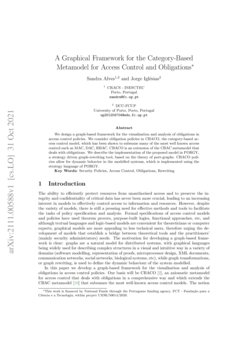 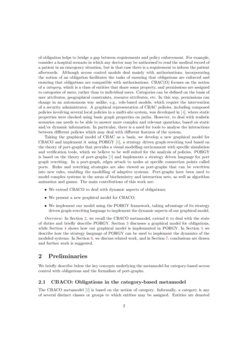 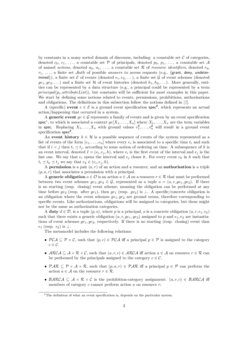 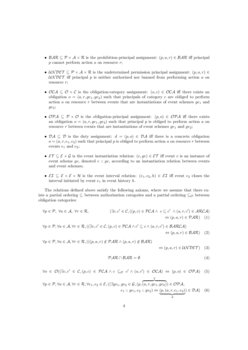 Even though the idea of partitioning provenance graphs for access contro...
Faen Zhang, et al. ∙

Smart Contract-Based Access Control for the Internet of Things

It is a crucial mechanism of access control to determine that data can o...
Faen Zhang, et al. ∙

The ability to efficiently protect resources from unauthorised access and to preserve the integrity and confidentiality of critical data has never been more crucial, leading to an increasing interest in models to effectively control access to information and resources. However, despite the variety of models, there is still a pressing need for effective methods and tools to facilitate the tasks of policy specification and analysis. Formal specifications of access control models and policies have used theorem provers, purpose-built logics, functional approaches, etc, and although textual languages and logic-based models are convenient for theoreticians or computer experts, graphical models are more appealing to less technical users, therefore urging the development of models that establish a bridge between theoretical tools and the practitioners’ (mainly security administrators) needs. The motivation for developing a graph-based framework is clear: graphs are a natural model for distributed systems, with graphical languages being widely used for describing complex structures in a visual and intuitive way in a variety of domains (software modelling, representation of proofs, microprocessor design, XML documents, communication networks, social networks, biological systems, etc), while graph transformations, or graph rewriting, is used to define the dynamic behaviour of the system modelled.

In this paper we develop a graph-based framework for the visualisation and analysis of obligations in access control policies. Our basis will be CBACO [2], an axiomatic metamodel for access control that deals with obligations in a comprehensive way and which extends the CBAC metamodel [10] that subsumes the most well-known access control models. The notion of obligation helps to bridge a gap between requirements and policy enforcement. For example, consider a hospital scenario in which any doctor may be authorised to read the medical record of a patient in an emergency situation, but in that case there is a requirement to inform the patient afterwards. Although access control models deal mainly with authorisations, incorporating the notion of an obligation facilitates the tasks of ensuring that obligations are enforced and ensuring that obligations are compatible with authorisations. CBAC(O) focuses on the notion of a category, which is a class of entities that share some property, and permissions are assigned to categories of users, rather than to individual users. Categories can be defined on the basis of user attributes, geographical constraints, resource attributes, etc. In this way, permissions can change in an autonomous way unlike, e.g., role-based models, which require the intervention of a security administrator. A graphical representation of CBAC policies, including composed policies involving several local policies in a multi-site system, was developed in [4], where static properties were checked using basic graph properties on paths. However, to deal with realistic scenarios one needs to be able to answer more complex and relevant questions, based on static and/or dynamic information. In particular, there is a need for tools to analyse the interactions between different policies which may deal with different features of the system.

Taking the graphical model of CBAC as a basis, we develop a new graphical model for CBACO and implement it using PORGY [5], a strategy driven graph-rewriting tool based on the theory of port-graphs that provides a visual modelling environment with specific simulation and verification tools, which we believe to be well suited for the analysis of policies. PORGY is based on the theory of port-graphs [7] and implements a strategy driven language for port graph rewriting. In a port-graph, edges attach to nodes at specific connection points called ports. Rules and rewriting strategies are also viewed as port-graphs that can be rewritten into new rules, enabling the modelling of adaptive systems. Port-graphs have been used to model complex systems in the areas of biochemistry and interaction nets, as well as algorithm animation and games. The main contributions of this work are:

Overview: In Section 0.2, we recall the CBACO metamodel, extend it to deal with the state of duties and briefly describe PORGY. Section 0.3 discusses a graphical model for obligations, while Section 0.4 shows how our graphical model is implemented in PORGY. In Section 0.5 we describe how the strategy language of PORGY can be used to implement the dynamics of the modeled systems. In Section 0.6, we discuss related work, and in Section 0.7, conclusions are drawn and further work is suggested.

We briefly describe below the key concepts underlying the metamodel for category-based access control with obligations and the formalism of port-graphs.

0.2.1 CBACO: Obligations in the category-based metamodel

The CBACO metamodel [2] is based on the notion of category. Informally, a category is any of several distinct classes or groups to which entities may be assigned. Entities are denoted by constants in a many sorted domain of discourse, including: a countable set C of categories, denoted c0, c1, …, a countable set P of principals, denoted p0, p1, …, a countable set A of named actions, denoted a0, a1, …, a countable set R of resource identifiers, denoted r0, r1, …, a finite set Auth of possible answers to access requests (e.g., {grant, deny, undetermined}), a finite set E of events (denoted e1,e2,…), a finite set G of event schemes (denoted ge1,ge2,…) and a finite set H of event histories (denoted h1,h2,…). More generally, entities can be represented by a data structure (e.g., a principal could be represented by a term principal(pi,attributeList)), but constants will be sufficient for most examples in this paper. We start by defining some notions related to events, permissions, prohibitions, authorisations and obligations. The definitions in this subsection follow the notions defined in [2].

A (specific) event e∈E is a ground event specification spec∅, which represents an actual action/happening that occurred in a system.

An event history h∈H is a possible sequence of events of the system represented as a list of events of the form [e1,…,en] where every ei is associated to a specific time ti and such that if i<j then ti⪯tj, according to some notion of ordering on time. A subsequence of h is an event interval, denoted I=(ei,ej,h), where ei is the first event of the interval and ej is the last one. We say that ei opens the interval and ej closes it. For every event ek in h such that ti⪯tk⪯tj we say that ek∈(ei,ej,h).

A permission is a pair (a,r) of an action and a resource, and an authorisation is a triple (p,a,r) that associates a permission with a principal.

A generic obligation o∈O is an action a∈A on a resource r∈R that must be performed between two event schemes ge1,ge2∈G, represented as a tuple o=(a,r,ge1,ge2). If there is no starting (resp. closing) event scheme, meaning the obligation can be performed at any time before ge2 (resp. after ge1), then ge1 (resp. ge2) is ⊥. A specific/concrete obligation is an obligation where the event schemes ge1,ge2 are ground terms, therefore corresponding to specific events. Like authorizations, obligations will be assigned to categories, but these might not be the same as authorization categories.

A duty d∈D, is a tuple (p,o), where p is a principal, o is a concrete obligation (a,r,e1,e2) such that there exists a generic obligation (a,r,ge1,ge2) assigned to p and e1,e2 are instantiations of event schemes ge1,ge2, respectively. If there is no starting (resp. closing) event then e1 (resp. e2) is ⊥.

The metamodel includes the following relations:

Issued obligations, can be in one of four states: invalid, fulfilled, pending or violated. This is unlike permissions, which are either issued or not. To deal with that, we defined the following new relations to deal with the state of duties:

We do not consider a relation on invalid duties, since our model does not allow them to be issued. Furthermore, we introduce the following axioms regarding the state of duties, where we assume that every history of events starts with an event ⊥.

We can represent elements of the graph as records (sets of pairs (attribute,value)) over the signature Δ. We assume the attributes Name, Interface, Arity, Attach and Connect. Attribute Name identifies records in the sense that if two records have the same value for attribute Name then they have the same set of defined attributes, although their values can differ.

A port graph rewrite rule is a port graph composed of two subgraphs, L and R, and a special node (called arrow node) that connects the two. It defines a way of rewriting graphs in the sense that, if there is a instance of L, it can be replaced by R and the arrow node defines the way to reconnect R to the rest of the graph. Ports in the arrow node have attribute Type that can have values bridge, blackhole or wire. These values define the rewriting in the following way:

A rewrite rule L⇒R matches a graph G if there is a morphism f such that f(L)⊆G and the image of every port p in L not connected to the arrow node is not connected to any port of G∖f(L). This last condition ensures that rewriting does not leave dangling edges.

Given a port graph G, a rewrite rule L⇒R and a morphism f such that f(L)⊆G, a rewriting step from G by rule L⇒R and morphism f, denoted G→fL⇒RG′, is defined as follows: the build phase: graph f(R) is added to G; the rewiring phase: edges connecting G∖f(L) to f(L) are connected to f(R) following the rules set by the arrow node; the deletion phase: f(L) is erased obtaining G′.

Given a set of rewrite rules and a graph, it will be possible to apply the rules in different orders and places of the graph. To control that, PORGY uses a strategy language. To define these strategies we start by defining the notions of position and banned subgraphs of a located graph.

A located graph GQP is a graph such that P⊆G is called the position subgraph and Q⊆G is the banned subgraph. This notion is used in PORGY to select nodes, ports or edges where rewriting should happen and where it cannot happen.

A located rewrite rule LW⇒RNM can be applied to a located graph GQP by means of a morphism f if: f(L)∩Q=∅; f(L)∩P=W, if W is specified. In this case we write GQP→fLW⇒RNMG′Q′P′ where P′=(P∖f(L))∪f(M) and Q′=Q∪f(N).

We now define a graphical model for CBACO that extends the CBAC representation using graphs presented in [4].

A CBACO policy graph G is a tuple ⟨NG,EG,ln,le⟩ with:

Because we represent both ⊆ and ⊆O there is the need to distinguish edges of type CC. Edges e that represent the ⊆ (resp. ⊆O) will have the auth (resp. obl) attribute value set to ⊤ and we write type(e)=CCP\textsubscriptr (resp. type(e)=CCO). Edges e of type CPr serve the same purpose of the edges of type CA in the graph representation of CBAC in [4] and for that reason have attribute auth defined as either A or B and we will write type(e)=CP\textsubscript{{r}}A and type(e)=CP\textsubscript{{r}}B, respectively, to distinguish edges corresponding to authorizations/prohibitions.

Given a well-formed policy graph G=⟨NG,EG,ln,le⟩ the CBACO policy defined by G is defined by the following entities and relations: