A Glioblastoma PDE-ODE model including chemotaxis and vasculature

In this work we analyse a PDE-ODE problem modelling the evolution of a Glioblastoma, which includes chemotaxis term directed to vasculature. First, we obtain some a priori estimates for the (possible) solutions of the model. In particular, under some conditions on the parameters, we obtain that the system does not develop blow-up at finite time. In addition, we design a fully discrete finite element scheme for the model which preserves some pointwise estimates of the continuous problem. Later, we make an adimensional study in order to reduce the number of parameters. Finally, we detect the main parameters determining different width of the ring formed by proliferative and necrotic cells and different regular/irregular behaviour of the tumor surface. 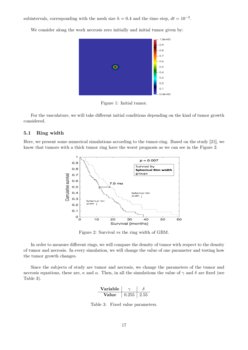 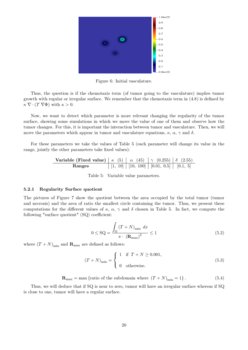 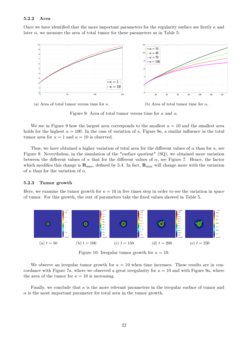 In this work we analyse a PDE-ODE problem modelling the evolution of a G...
A. Fernández-Romero, et al. ∙

In this paper, we consider a mathematical model for the invasion of host...
Viviana Niño-Celis, et al. ∙

Word order evolution has been hypothesized to be constrained by a word o...
Ramon Ferrer-i-Cancho, et al. ∙

In this work we analyse a PDE-ODE problem modelling the evolution of a Glioblastoma, which includes chemotaxis term directed to vasculature. First, we obtain some a priori estimates for the (possible) solutions of the model. In particular, under some conditions on the parameters, we obtain that the system does not develop blow-up at finite time. In addition, we design a fully discrete finite element scheme for the model which preserves some pointwise estimates of the continuous problem. Later, we make an adimensional study in order to reduce the number of parameters. Finally, we detect the main parameters determining different width of the ring formed by proliferative and necrotic cells and different regular/irregular behaviour of the tumor surface. Mathematics Subject Classification. 35A01,35B40,35M10,35Q92,47J35,92B05 Keywords: Glioblastoma, Chemotaxis, PDE-ODE system, Numerical scheme. The authors were supported by PGC2018-098308-B-I00 (MCI/AEI/FEDER, UE).

Among the group of brain tumors, the Glioblastoma (GBM) is the most aggressive form with a survival of a little more than one year [19]. Moreover, GBM differs from many solid tumors in the sense that they grow infiltratively into the brain tissue, there exists an important presence of necrosis and they produce a high proliferation tumor cells. For all these reasons, GBM is one of the cancer types with more interest in the mathematical oncology community (see [1, 4, 24] and references therein).

Some studies about the morphology of GBM are based in the magnetic resonance images (MRI) in order to obtain results related to prognosis and survival (see [17, 21, 22, 23]). Specifically, Molab333http://matematicas.uclm.es/molab/

In [31], the authors use the Fisher-Kolmogorov equation to reproduce the infiltrative characteristic of the GBM. However, more complex mathematical models are also built to simulate phenomena such that the tumor ring and the regularity surface of the GBM. One model appears in [20] where the tumor ring is studied by a PDE-ODE system of two equations (proliferative tumor and necrosis). In [9, 10], the authors present a PDE-ODE system with three equations (proliferative tumor, necrosis and vasculature) which is able to capture different behaviours of tumor ring and regularity surface of the GBM via a nonlinear diffusion tumor increasing with vasculature.

In this paper, we present a PDE-ODE system, also with three equations (tumor, necrosis and vasculature) but, with chemotaxis term (tumor directed to vasculature) and we study the biological behaviours of the GBM such as the tumor ring volume, studied in [20, 21], and the regularity surface considered in [23], and compare the results with those in [9, 10].

Some previous chemotactic PDE-ODE models have been extensively studied in the literature, see for instance [5, 25, 26, 27] where the authors model the cells movement with a parabolic-ODE system. Specifically, in [27] a system of PDEs is considered using a probabilistic framework of reinforced random walks. The authors analyse various combinations of taxis and local dynamics giving examples of aggregation, blow-up and collapse. Later, in [25], some analytical and numerical results which support the numerical observations of [27] are presented using a similar model than in [27]. Moreover, in [3, 5] a model of tumor inducing angiogenesis is proposed consisting of a equation with chemotaxis and haptotaxis term, and two nonlinear ODEs. Finally, in [26] a stochastic system related to bacteria and particles of chemical substances is discussed where the position of each particle is described by a equation of a chemotaxis system.

Recently, a PDE-ODE model with chemotaxis is studied in [13] obtaining asymptotic stability results using a proper transformation and energy estimates. Another PDE-ODE with chemotaxis problem is considered in [18] modelling the evolution of biological species and they obtain analytical results concerning the bifurcation of constant steady states and global existence of solutions for a range of initial data.

In this paper, we investigate the following parabolic PDE-ODE system in (0,Tf)×Ω (Ω⊆R3 is a bounded and regular domain and Tf>0 corresponds to the final time)

endowed with non-flux boundary condition on the boundary ∂Ω

is the outward unit normal vector to

Here, T(t,x),N(t,x) and Φ(t,x) represent the tumor and necrotic densities and the vasculature concentration at the point x∈Ω and time t>0, respectively.

The nonlinear reactions functions fi:R3→R for i=1,2,3 have the following form

The outline of the paper is as follows. In Section 2, we prove Theorem 1.1. In Section 3 we build a numerical scheme which preserves the a priori estimates of the continuous model given in Theorem 1.1 a). Later, in Section 4, we show a possible example of the dimensionless reaction functions of the system satisfying the hypotheses given in (???)-(???) and (???)-(???) and we make an adimensionalization of the model. Section 5 is dedicated to show, by means of some numerical simulations, the different behaviour of the ring width-volume and the regularity surface with respect to the dimensionless parameters. Finally, the more technical part of the proof of Theorem 1.1 b), obtained via an Alikakos’ argument, is given in an Appendix.

Any solution (T,N,Φ) of the truncated problem (???) satisfy the following pointwise estimates:

Any solution of (T,N,Φ) satisfies the estimates:

Rewriting P(Φ,T)T=√P(Φ,T)√P(Φ,T)T and applying Young’s inequality for the right side, we get,

Hence, using that P(Φ,T)≤1, we conclude that

In order to obtain the L∞ estimate for T, firstly we make a change of variable such that we rewrite the diffusion term and chemotaxis term as an unique diffusion term depending on the new variable. In fact, we consider:

Thus, the first equation of (???) changes to

and the boundary condition (???) to

Using the auxiliary variable w=up/2, we can rewrite (???) as follows

Thus, applying Gronwall’s lemma, we deduce for p=2 that

We are going to apply the following Gagliardo-Nirenberg interpolation inequality (

Hence, we obtain that

Following a similar argument to used by Alikakos in [2] (see Appendix), from (???) we can obtain that

Using the change of variable T=eχΦu as in Lemma 2.3, we deduce that

Using now Cauchy-Schwarz and Young’s inequalities in (???) and (???) and adding them, it holds that

In this Section, we are going to design an uncoupled and linear fully discrete scheme to approach (???)-(???) by means of an Implicit-Explicit (IMEX) Finite Difference in time and P1 continuous finite element with "mass-lumping" in space discretization. This scheme will preserve the pointwise estimates that appear in Lemma 2.1 considering acute triangulations.

Now we introduce the hypotheses required along this section.

Let Ih:C0(¯¯¯¯Ω)→Nh be the nodal interpolation operator and consider the discrete inner product