Modeling of textures in natural images is an important task to make a microscopic model of natural images. Portilla and Simoncelli proposed a generative texture model, which is based on the mechanism of visual systems in brains, with a set of texture features and a feature matching. On the other hand, the texture features, used in Portillas' model, have redundancy between its components came from typical natural textures. In this paper, we propose a contracted texture model which provides a dimension reduction for the Portillas' feature. This model is based on a hierarchical principal components analysis using known group structure of the feature. In the experiment, we reveal effective dimensions to describe texture is fewer than the original description. Moreover, we also demonstrate how well the textures can be synthesized from the contracted texture representations. 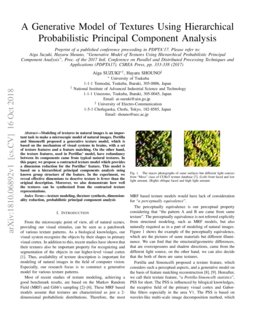 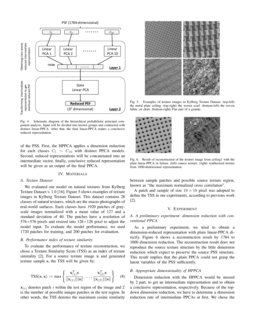 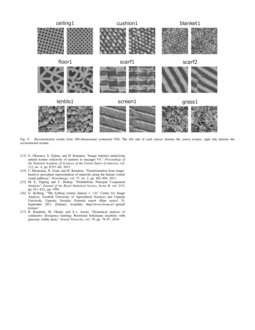 From the microscopic point of view, all of natural scenes, providing our visual stimulus, can be seen as a patchwork of various texture patterns. As a biological knowledges, our visual system recognize the objects by their shapes in primary visual cortex. In addition to this, recent studies have shown that their textures also be important property for recognizing and segmentation of the objects in our higher-level visual cortex [1]

. Thus, availability of texture description is important for modeling of natural images in the field of computer vision. Especially, our research focus is to construct a generative model for various texture patterns.

Most of recent studies of texture modeling, achieving a good benchmark results, are based on the Markov Random Field (MRF) and Gibb’s sampling [2, 3, 4, 5, 6]. These MRF based models assume that textures are characterized as just a 2-dimensional probabilistic distributions. Therefore, the most MRF based texture models would have lack of consideration for “a perceptually equivalence”.

Portilla and Simoncelli proposed a texture feature, which considers such a perceptual aspects, and a generative model on the basis of feature matching reconstruction [8, 9]. Hereafter, we call their texture feature, “a Portilla-Simoncelli statistics”, PSS for short. The PSS is influenced by bilogical knowledges, the receptive field of the primary visual cortex and Gabor-like filters especially in the area V1. The PSS is based on wavelet-like multi-scale image decomposition method, which has translation-invariance and rotation-invariance, known as a steerable filter pyramid[10]. The PSS is consists of a marginal statistics over decomposed images, which act as constraints of the texture structure. Simoncelli et al. showed that the PSS could charactarize and generate various textures [8, 11, 12, 9]

. In recent, moreover, some studies report that the PSS could express the selective neuronal activity in area V4 of macaque

[13] and in area V2 of humans’ cerebral cortex [14]. These reports were implying that the PSS could be appropriate representation of our texture recognition mechanisms.

This section gives an overview of the PSS used in our study as a texture feature.

αk denotes a coordinate of Bk which depends on number of orientation K, given by

Low-pass transfer element L0 had to be defined to reject a band exeeding the Nyquist limit, to make this decomposition a complete system.

Refer to Eq.6, the high-pass transfer element H0 follows the low-pass residual as

Ii-B Construction of the PSS

The PSS is constructed as a list of 10-types of statistics C1∼C10, came from the steerable filter pyramid.

Skewness and kurtosis of reconstructed images with each scales of steerable filter pyramid, including a low-pass residual ~ILR. (2(N+1) dimensions)

Ii-B3 Auto-correlation of each decompositions (C3)

M-neighbor auto-correlation of reconstructed images with each decompositions (scales and orientations) of the steerable filter pyramid. (N⋅K⋅M2 dimensions)

Ii-B4 Auto-correlaton of each scales (C4)

M-neighbor auto-correlation of reconstructed images with each scales of steerable filter pyramid, including a low-pass residual ~ILR. (M2⋅(N+1) dimensions)

Ii-B5 Cross-correlations between decomposed images for each scales (C5)

Cross-correlation of decomposed image with each scales between each orientations. (N⋅K2 dimensions)

Ii-B6 Cross-correlations between reconstructed images for each scales (C6)

Cross-correlation of reconstructed images with each scales, including a low-pass residual ~ILR, between each orientations. (K2(N+1) dimensions)

Cross-correration of reconstructed images with each scales, including a low-pass residual ~ILR, and each orientations. (K2⋅N(N+1) dimensions)

Cross-correlation of decomposed image for each decompositions (scales and orientations). (N2⋅K2 dimensions)

In this paper, we propose a probabilistic principal component analysis (PPCA) [15]

based model for dimension reduction, which focuses to known structure of the PSS. PPCA is a statistical method to estimate the latent variables which generate an input data essentially. It is similar to deterministic principal component analysis (PCA) and provides a same result usually, however, PPCA is a probabilistic model which assume that the input data would be generated under the Gaussian distribution and the Gaussian noize. Therefore, PPCA has a merit of an optimization under the high-dimensional input space.

PPCA could be of use for dimension reduction in most cases, however, we could sometimes know the structure or correlation of the input data in advance. For example, construction of the PSS was built up gradually with 10-types of statistics. In other words, the PSS has a group-structure between its components. Considering such a known structure, it is possible to grasp more effective contracted representation of the input data.

We propose a novel architecture of PPCA, considering such a known structure of the input data, a “hierarchical probabilistic principal component analysis” (HPPCA). Figure 4 shows a schematic diagram of the HPPCA. The HPPCA applies a hierarchical dimension reduction which is based on a structure of the PSS. First, the HPPCA applies a dimension reduction for each classes C1∼C10

We evaluated our model on natural textures from Kylberg Texture Dataset v. 1.0 [16]. Figure 5

shows examples of texture images in Kylberg Texture Dataset. This dataset contains 28 classes of natural textures, which are the macro photographs of real-world surfaces. Each classes have 1920 patches of gray-scale images normalized with a mean value of 127 and a standard deviation of 40. The patches have a resolution of 576

×576 pixels and resized into 128×128 pixel to adjust the model input. To evaluate the model performance, we used 1720 patches for training, and 200 patches for evaluation.

To evaluate the performance of texture reconstruction, we chose a Texture Similarity Score (TSS) as an index of texture simirality [2]. For a source texture image x and generated texture sample s, the TSS will be given by:

is the number of possible unique patches in the test region. In other words, the TSS denotes the maximum cosine similarity between sample patches and possible source texture region, known as “the maximum normalized cross correlation”.

A patch and sample of size 19×19 pixel was adopted to define the TSS in our experiments, according to previous work [2].

As a preliminary experiment, we tried to obrain a dimension-reduced representation with plain linear-PPCA directly. Figure 6 shows a reconstruction result by 1784 to 1000 dimension reduction. The reconstruction result does not reproduce the source texture structure by the little dimension reduction which expect to preserve the source PSS structure. This result implies that the plain PPCA could not grasp the latent variables of the PSS sufficiently.

Plot of the TSS vs cumulative contribution ratio of intermediate PPCAs is shown in Figure 7. It was shown that the TSS was monotonically increased as the cumulative contribution ratio, however, it exeeded machine epsion of 32-bit float after log10(1−r)=−8, (r=0.99999999). Thus, we chose r=0.99999999 and 965-dimensional intermediate representation.

This section shows that the contracted representation by our proposed method can reconstruct the textures with perceptually equivalence. The reconstructed textures by contracted PSS using the HPPCA disscussed in previous section shown in Figure 9. The fine textures, that are ceiling1, cushion1, and blanket1, were well-reproduced by reduced PSS (9 first row). On the other hand, however, the coarse textures, which have large patterns, sometimes have trouble with a reproducing the continuous (9 second and third row). This could be due to the lack of reproduce the low-frequency component of reduced PSS with the HPPCA. Nevertheless, the most of reconstruction results might be said to reproduce source texture structure and we could determine these textures were almost much the same.

The dimension reduction method of the Portilla-Simoncelli statistics, that is a perceptual texture feature, using the hierarchical probabilistic principal component analysis was introduced in this paper. We achieved a 88.8 [%] dimension reduction from the raw PSS preserving the source texture structures in reconstruction.

[17]. Such connectionism would be make the PPCA easier to grasp the latent structure of the input space. In future work, we intend to analyze mathematically the machanizm of the HPPCA model and build more generalized texture model via the large-scaled natural image datasets.