A Generalization Method of Partitioned Activation Function for Complex Number 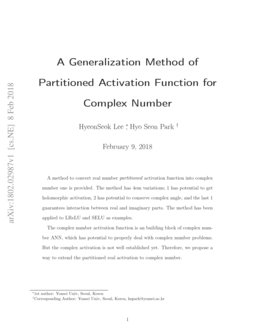 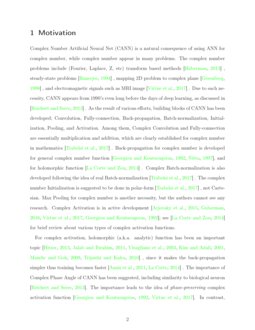 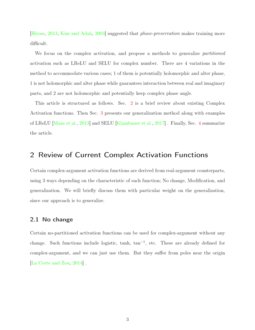 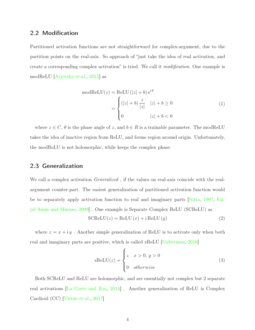 . Due to such necessity, CANN appears from 1990’s even long before the days of deep learning, as discussed in

. As the result of various efforts, building blocks of CANN has been developed; Convolution, Fully-connection, Back-propagation, Batch-normalization, Initialization, Pooling, and Activation. Among them, Complex Convolution and Fully-connection are essentially multiplication and addition, which are clearly established for complex number in mathematics

, not Cartesian. Max Pooling for complex number is another necessity, but the authors cannot see any research. Complex Activation is in active development

. The importance of Complex Phase Angle of CANN has been suggested, including similarity to biological neuron

This article is structured as follows. Sec. 2 is a brief review about existing Complex Activation functions. Then Sec. 3 presents our generalization method along with examples of LReLU (Maas et al., 2013) and SELU (Klambauer et al., 2017) . Finally, Sec. 4 summarize the article.

Certain complex-argument activation functions are derived from real-argument counterparts, using 3 ways depending on the characteristic of each function; No change, Modification, and generalization. We will briefly discuss them with particular weight on the generalization, since our approach is to generalize.

Partitioned activation functions are not straightforward for complex-argument, due to the partition points on the real-axis. So approach of “just take the idea of real activation, and create a corresponding complex activation” is tried. We call it modification. One example is modReLU (Arjovsky et al., 2015) as

is a trainable parameter. The modReLU takes the idea of inactive region from ReLU, and forms region around origin. Unfortunately, the modReLU is not holomorphic, while keeps the complex phase.

We call a complex activation Generalized , if the values on real-axis coincide with the real-argument counter-part. The easiest generalization of partitioned activation function would be to separately apply activation function to real and imaginary parts (Nitta, 1997; Faijul Amin and Murase, 2009) . One example is Separate Complex ReLU (SCReLU) as

where z=x+iy . Another simple generalization of ReLU is to activate only when both real and imaginary parts are positive, which is called zReLU (Guberman, 2016)

Both SCReLU and ReLU are holomorphic, and are essentially not complex but 2 separate real activations (La Corte and Zou, 2014) . Another generalization of ReLU is Complex Cardioid (CC) (Virtue et al., 2017)

which keeps the complex angle, but is not holomorphic. Our approach is inspired by the CC.

Consider a partitioned activation function for real number, which has the typical form

where f0 and f1 are local functions for positive and negative regions. Activation functions like LReLU and SELU are examples of the above case. Now, replace partitions with Heaviside unit-step function H(x), and we can rewrite f(x) as

Next, select a complex-argument function, whose real axis values coincide with the H(x) and H(−x) . We pick

where θ is the phase angle of complex number z=x+iy, and n∈Z (is an integer) is a parameter. Then, we can get a generalized complex-argument function

This approach can be easily extended to more complicated cases, like S-shaped ReLU (SReLU) which has 3 partitions. The typical form

where θp denotes the phase angle of complex number zp=z−xp=(x−xp)+iy, and xp is the location of partition boundary p.

and generalization using them are

Another approach is to approximate H(x−xp) on real axis with a complex-argument function. A few well known such functions are based on tanh (hyperbolic tangent) , tan−1 (arc tangent), Si (sine integral), and erf (error function) functions. Among them, we pick erf

based Sigmoid function as below, since

tanh and tan−1 has poles on imaginary axis, and Si is oscillatory on real axis.

where σ>0 is a just a parameter such that smaller σ more closely approximates H(x) on the real axis. Then approximately generalized functions are

The LReLU (Maas et al., 2013) is the one of the most popular activation function (The ReLU is just a LReLU with α=0). The real-argument LReLU is

which alters both phase and magnitude of input z and has cross-influence between real and imaginary components. To keep the complex angle of argument, we use (13a) and (13b) with n=0 to get

which is holomorphic, since both the f0(z)=αz and f1(z)=z are polynomials which are all holomorphic. Please note that the HLReLU alters phase angle of argument, since the argument z is multiplied with a complex number.

The SELU (Klambauer et al., 2017) was recently developed, and rapidly becomes popular due to its self-normalizing feature (The ELU is just a SELU with λ=1 ). The real-argument SELU is

Complex phase is altered with all 3 CSELU, cSELU, and aSELU, unlike cLReLU (19a) and aLReLU (19b). Instead, all has interaction between real and imaginary components of argument.

Meanwhile, a Holomorphic “SELU” (HSELU) can be derived using (15) as

which is also holomorphic, since both the scaled shifted exponential f0(z)=λα(ez−1) and polynomial f1(z)=λz are holomorphic.

Furthermore, the method can be used for various partitioned real activation to make them into complex activation. He hope that this humble research adds another building block for complex ANN, which is important for complex number problems.