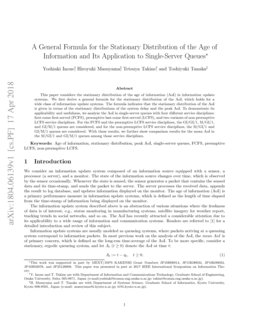 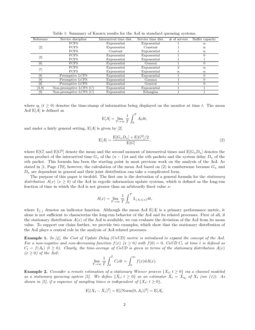 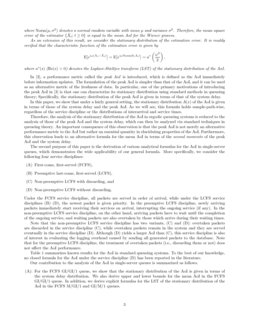 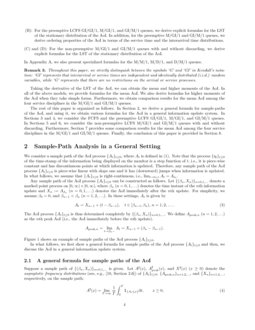 In this paper, we consider the age of information (AoI) of a discrete ti...
Jixiang Zhang, et al. ∙

There is a growing interest in analysing the freshness of data in networ...
Jaya Prakash Champati, et al. ∙

We consider an M server system in which each server can service at most ...
Rajat Talak, et al. ∙

Anti-Aging Scheduling in Single-Server Queues: A Systematic and Comparative Study

The information update system described above is an abstraction of various situations where the freshness of data is of interest, e.g., status monitoring in manufacturing systems, satellite imagery for weather report, tracking trends in social networks, and so on. The AoI has recently attracted a considerable attention due to its applicability to a wide range of information and communication systems. Readers are referred to [1] for a detailed introduction and review of this subject.

Information update systems are usually modeled as queueing systems, where packets arriving at a queueing system correspond to information packets. In most previous work on the analysis of the AoI, the mean AoI is of primary concern, which is defined as the long-run time-average of the AoI. To be more specific, consider a stationary, ergodic queueing system, and let At (t≥0) denote the AoI at time t:

where ηt (t≥0) denotes the time-stamp of information being displayed on the monitor at time t. The mean AoI E[A] is defined as

and under a fairly general setting, E[A] is given by [2]

denote the mean and the second moment of interarrival times and

E[GnDn] denotes the mean product of the interarrival time Gn of the (n−1)st and the nth packets and the system delay Dn of the nth packet. This formula has been the starting point in most previous work on the analysis of the AoI. As stated in [1, Page 170], however, the calculation of the mean AoI based on (2) is cumbersome because Gn and Dn

are dependent in general and their joint distribution can take a complicated form.

The purpose of this paper is twofold. The first one is the derivation of a general formula for the stationary distribution A(x) (x≥0) of the AoI in ergodic information update systems, which is defined as the long-run fraction of time in which the AoI is not greater than an arbitrarily fixed value x:

where 1{⋅} denotes an indicator function. Although the mean AoI E[A] is a primary performance metric, it alone is not sufficient to characterize the long-run behavior of the AoI and its related processes. First of all, if the stationary distribution A(x) of the AoI is available, we can evaluate the deviation of the AoI from its mean value. To support our claim further, we provide two examples, which show that the stationary distribution of the AoI plays a central role in the analysis of AoI-related processes.

In [4], the Cost of Update Delay (CoUD) metric is introduced to expand the concept of the AoI. For a non-negative and non-decreasing function f(x) (x≥0) with f(0)=0, CoUD Ct at time t is defined as Ct=f(At) (t≥0). Clearly, the time-average of CoUD is given in terms of the stationary distribution A(x) (x≥0) of the AoI:

Consider a remote estimation of a stationary Wiener process

σ2. Therefore, the mean square error of the estimator {^Xt;t≥0} is equal to the mean AoI for the Wiener process.

where a∗(s) (Re(s)>0) denotes the Laplace-Stieltjes transform (LST) of the stationary distribution of the AoI.

In this paper, we show that under a fairly general setting, the stationary distribution A(x) of the AoI is given in terms of those of the system delay and the peak AoI. As we will see, this formula holds sample-path-wise, regardless of the service discipline or the distributions of interarrival and service times.

Therefore, the analysis of the stationary distribution of the AoI in ergodic queueing systems is reduced to the analysis of those of the peak AoI and the system delay, which can then be analyzed via standard techniques in queueing theory. An important consequence of this observation is that the peak AoI is not merely an alternative performance metric to the AoI but rather an essential quantity in elucidating properties of the AoI. Furthermore, this observation leads to an alternative formula for the mean AoI in terms of the second moments of the peak AoI and the system delay.

The second purpose of this paper is the derivation of various analytical formulas for the AoI in single-server queues, which demonstrates the wide applicability of our general formula. More specifically, we consider the following four service disciplines:

Table 1 summarizes known results for the AoI in standard queueing systems. To the best of our knowledge, no closed formula for the AoI under the service discipline (D) has been reported in the literature.

Our contribution to the analysis of the AoI in single-server queues is summarized as follows.

In Appendix A, we also present specialized formulas for the M/M/1, M/D/1, and D/M/1 queues.

The rest of this paper is organized as follows. In Section 2, we derive a general formula for sample-paths of the AoI, and using it, we obtain various formulas for the AoI in a general information update system. In Sections 3 and 4, we consider the FCFS and the preemptive LCFS GI/GI/1, M/GI/1, and GI/M/1 queues. In Sections 5 and 6, we consider the non-preemptive LCFS M/GI/1 and GI/M/1 queues with and without discarding. Furthermore, Section 7 provides some comparison results for the mean AoI among the four service disciplines in the M/GI/1 and GI/M/1 queues. Finally, the conclusion of this paper is provided in Section 8.

2 Sample-Path Analysis in a General Setting

We consider a sample path of the AoI process {At}t≥0, where At is defined in (1). Note that the process {ηt}t≥0 of the time-stamp of the information being displayed on the monitor is a step function of t, i.e., it is piece-wise constant and has discontinuous points at which information is updated. Therefore, any sample path of the AoI process {At}t≥0 is piece-wise linear with slope one and it has (downward) jumps when information is updated. In what follows, we assume that {At}t≥0 is right-continuous, i.e., limt→t0+At=At0.

Figure 1 shows an example of sample paths of the AoI process {At}t≥0.

In what follows, we first show a general formula for sample paths of the AoI process {At}t≥0 and then, we discuss the AoI in a general information update system.

2.1 A general formula for sample paths of the AoI

The following lemma is a sample-path analogue of the elementary renewal theorem.

To proceed further, we make the following assumptions.

Thus, to prove the theorem, it suffices to show that

where the last equality follows from the following relation: For any x≥0 and y≥0,

Combining this with (13) yields

In the proof of Theorem 7, we do not use the inequality Xn≤Apeak,n (n=1,2,…) that should hold in the context of the AoI.

2.2 Sample path analysis of the AoI in information update systems

As noted in Remark 3, G/G/1 queues are more general than GI/GI/1 queues. In what follows, we consider the FIFO G/G/1 queue of informative packets, so that we obtain general results which are applicable to information update systems with any service disciplines.

The mean arrival rate of informative packets is positive and finite, i.e.,

It then follows from Lemma 4 that under Assumption 10, we have

Information update systems are usually modeled as stationary, ergodic stochastic models. We thus interpret Corollary 12 in such a context. In the rest of this paper, we use the following conventions. For a non-negative random variable Y, let Y(x) (x≥0

Let A, Apeak, and D denote generic random variables for the stationary AoI, peak AoI, and system delay, respectively. Since the system is ergodic, the following equalities hold with probability 1:

Theorem 14 presented below is immediate from Corollary 12 and basic properties of LST.

Assumption 10 holds with probability 1 and both {Apeak,n}n=1,2,… and {Dn}n=0,1,… are stationary, ergodic stochastic processes.

As shown in (22), the mean AoI can also be obtained by taking the derivative of a∗(s) and letting s→0+, which we will use repeatedly in the rest of this paper.

Theorem 14 can be applied to information update systems with any service disciplines: Recall that we introduced the FIFO G/G/1 queue as a virtual system where only informative packets are visible, and the original system (with non-informative packets) is not required to be FIFO.

In this section, we apply Theorem 14 to FCFS GI/GI/1, M/GI/1 and GI/M/1 queues. Let G and H denote generic random variables for interarrival times and service times, where E[G]>0. Let ρ=E[H]/E[G] denote the traffic intensity. Throughout this section, we assume ρ<1, so that the system is stable. We also assume that the system is stationary and ergodic.

We consider the FCFS GI/GI/1 queue. Because all arriving packets are informative in this model, the mean arrival rate λ† of informative packets is given by

Note here that Gn is independent of Dn−1. We thus obtain the following lemma from (27).

In the stationary, ergodic FCFS GI/GI/1 queue, the LST a∗peak(s) of the peak AoI is given by

Theorem 14 and Lemma 17 imply that the distributions of the AoI and the peak AoI in the stationary, ergodic FCFS GI/GI/1 queue are given in term of the distribution of the system delay D.

In what follows, we derive upper and lower bounds of the mean AoI E[A]. We rewrite (2) to be

In the stationary, ergodic FCFS GI/GI/1 queue, Cov[Gn,Dn] is bounded as follows.

The proof of Lemma 18 is provided in Appendix B.

In the stationary, ergodic FCFS GI/GI/1 queue, the mean AoI is bounded as follows.

The bounds in Theorem 19 are tight in the sense that both equalities hold in the D/GI/1 queue.

Bounding E[D] in (30) and (31) by these inequalities, we can obtain a bound for E[A] in terms of only the distributions of G and H.

the following corollary is immediate from (31).

In this subsection, we consider the AoI in the stationary FCFS M/GI/1 queue, where interarrival times are i.i.d. according to an exponential distribution with parameter

where ~h∗(s) denotes the LST of residual service times.

Furthermore, noting (34), we can rewrite the first term on the right hand side of (35) to be

We thus obtain the following result from Theorem 14.

where γ denotes the unique solution of

In the stationary FCFS GI/M/1 queue, the LST a∗peak(s) of the peak AoI is given by

We thus obtain the following result from Theorem 14.

In the stationary FCFS GI/M/1 queue, the LST a∗(s) of the AoI is given by

where ~g∗(s) denotes the LST of residual interarrival times.

Taking the derivatives of a∗(s), we obtain the first two moments of the AoI as follows.

In the stationary FCFS GI/M/1 queue, the first two moments of the AoI are given by