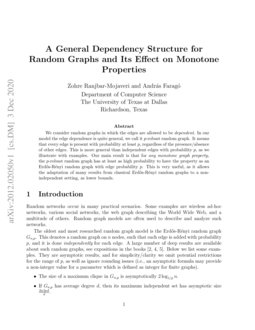 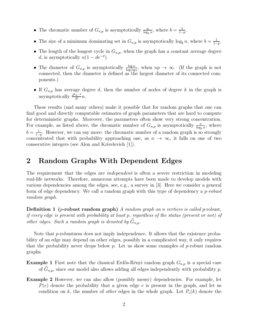 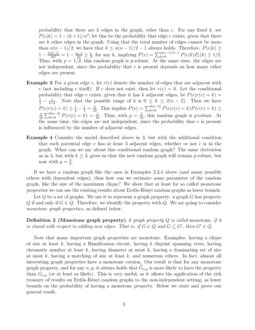 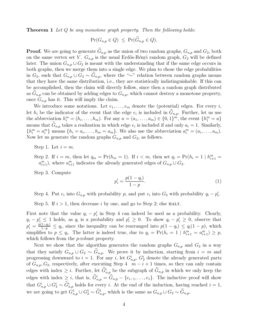 Random networks occur in many practical scenarios. Some examples are wireless ad-hoc networks, various social networks, the web graph describing the World Wide Web, and a multitude of others. Random graph models are often used to describe and analyze such networks.

The oldest and most researched random graph model is the Erdős-Rényi random graph Gn,p. This denotes a random graph on n nodes, such that each edge is added with probability p, and it is done independently for each edge. A large number of deep results are available about such random graphs, see expositions in the books [2, 4, 5]. Below we list some examples. They are asymptotic results, and for simplicity/clarity we omit potential restrictions for the range of p, as well as ignore rounding issues (i.e., an asymptotic formula may provide a non-integer value for a parameter which is defined as integer for finite graphs).

These results (and many others) make it possible that for random graphs that one can find good and directly computable estimates of graph parameters that are hard to compute for deterministic graphs. Moreover, the parameters often show very strong concentration. For example, as listed above, the chromatic number of

Gn,p is asymptotically nlogbn, where b=11−p. However, we can say more: the chromatic number of a random graph is so strongly concentrated that with probability approaching one, as n→∞, it falls on one of two consecutive integers (see Alon and Krivelevich [1]).

The requirement that the edges are independent is often a severe restriction in modeling real-life networks. Therefore, numerous attempts have been made to develop models with various dependencies among the edges, see, e.g., a survey in [3]. Here we consider a general form of edge dependency. We call a random graph with this type of dependency a p-robust random graph.

(p-robust random graph) A random graph on n vertices is called p-robust, if every edge is present with probability at least p, regardless of the status (present or not) of other edges. Such a random graph is denoted by ˜Gn,p.

Note that p-robustness does not imply independence. It allows that the existence probability of an edge may depend on other edges, possibly in a complicated way, it only requires that the probability never drops below p. Let us show some examples of p-robust random graphs.

First note that the classical Erdős-Rényi random graph Gn,p is a special case of ˜Gn,p, since our model also allows adding all edges independently with probability p.

Consider the model described above in 3, but with the additional condition that each potential edge e has at least 3 adjacent edges, whether or not e is in the graph. What can we say about this conditional random graph? The same derivation as in 3, but with k≥3, gives us that the new random graph will remain p-robust, but now with p=38.

If we have a random graph like the ones in Examples 2,3,4 above (and many possible others with dependent edges), then how can we estimate some parameter of the random graph, like the size of the maximum clique? We show that at least for so called monotone properties we can use the existing results about Erdős-Rényi random graphs as lower bounds.

Let Q be a set of graphs. We use it to represent a graph property: a graph G has property Q if and only if G∈Q. Therefore, we identify the property with Q. We are going to consider monotone graph properties, as defined below.

(Monotone graph property) A graph property Q is called monotone, if it is closed with respect to adding new edges. That is, if G∈Q and G⊆G′, then G′∈Q.

Note that many important graph properties are monotone. Examples: having a clique of size at least k, having a Hamiltonian circuit, having k disjoint spanning trees, having chromatic number at least k, having diameter at most k, having a dominating set of size at most k, having a matching of size at least k, and numerous others. In fact, almost all interesting graph properties have a monotone version. Our result is that for any monotone graph property, and for any n,p, it always holds that ˜Gn,p is more likely to have the property than Gn,p (or at least as likely). This is very useful, as it allows the application of the rich treasury of results on Erdős-Rényi random graphs to the non-independent setting, as lower bounds on the probability of having a monotone property. Below we state and prove our general result.

Let Q be any monotone graph property. Then the following holds:

Proof. We are going to generate ˜Gn,p as the union of two random graphs, Gn,p and G2, both on the same vertex set V. Gn,p is the usual Erdős-Rényi random graph, G2 will be defined later. The union Gn,p∪G2 is meant with the understanding that if the same edge occurs in both graphs, then we merge them into a single edge. We plan to chose the edge probabilities in G2, such that Gn,p∪G2∼˜Gn,p, where the “∼” relation between random graphs means that they have the same distribution, i.e., they are statistically indistinguishable. If this can be accomplished, then the claim will directly follow, since then a random graph distributed as ˜Gn,p can be obtained by adding edges to Gn,p, which cannot destroy a monotone property, once Gn,p has it. This will imply the claim.

We introduce some notations. Let e1,…,em denote the (potential) edges. For every i, let hi be the indicator of the event that the edge ei is included in ˜Gn,p. Further, let us use the abbreviation hmi=(hi,…,hm). For any a=(a1,…,am)∈{0,1}m, the event {hm1=a} means that ˜Gn,p takes a realization in which edge ei is included if and only ai=1. Similarly, {hmi=ami} means {hi=ai,…,hm=am}. We also use the abbreviation ami=(ai,…,am). Now let us generate the random graphs Gn,p and G2, as follows.

Next we show that the algorithm generates the random graphs Gn,p and G2 in a way that they satisfy Gn,p∪G2∼˜Gn,p. We prove it by induction, starting from i=m and progressing downward to i=1. For any i, let Gin,p, Gi2 denote the already generated parts of Gn,p,G2, respectively, after executing Step 4   m−i+1 times, so they can only contain edges with index ≥i. Further, let ˜Gin,p be the subgraph of ˜Gn,p in which we only keep the edges with index ≥i, that is, ˜Gin,p=˜Gn,p−{ei−1,…,e1}. The inductive proof will show that Gin,p∪Gi2∼˜Gin,p holds for every i. At the end of the induction, having reached i=1, we are going to get G1n,p∪G12∼˜G1n,p, which is the same as Gn,p∪G2∼˜Gn,p.

Let us consider first the base case i=m. Then we have Pr(em∈Gn,p)=Pr(em∈Gmn,p)=p by Step 4. Then in Step 4, edge em is put into G2 with probability qm−p′m, yielding Pr(em∈Gm2)=qm−p′m. Now observe that the formula (1) is chosen such that p′i is precisely the solution of the equation

For the induction step, assume that the claim is true for i+1, i.e., Gi+1n,p∪Gi+12∼˜Gi+1n,p holds. In Step 4, edge ei is added to Gi+1n,p with probability p. It is also added to Gi+12 with probability qi−p′i. Therefore, just like in the base case, we get that p+qi−p′i−(qi−p′i)p=Pr(ei∈Gin,p∪Gi2). We already know that p′i satisfies the equation (2), so ei is added to ˜Gi+1n,p with probability qi=Pr(hi=1|hmi+1=ami+1), given the already generated part, represented by ami+1. By the inductive assumption, hmi+1 is distributed as ˜Gi+1n,p, which is the truncated version of ˜Gn,p, keeping only the ≥i+1 indexed edges. Hence, for hmi+1

, we can write by the chain rule of conditional probabilities:

After processing ei (i.e., adding it with probability qi), we get

which, by the chain rule, is indeed the distribution of ˜Gin,p, completing the induction.

Thus, at the end, a realization a=am1∈{0,1}m of ˜Gn,p is generated with probability

indeed creating ˜Gn,p with its correct probability. Therefore, we get Gn,p∪G2∼˜Gn,p, so ˜Gn,p arises by adding edges to Gn,p, which cannot destroy a monotone property. This implies the statement of the Theorem, completing the proof.

As a sample application of the result, consider the random graph described in Example 3. For handy access, let us repeat the example here:

Example 3. For a given edge e, let r(e) denote the number of edges that are adjacent with e (not including e itself). If e does not exist, then let r(e)=0. Let the conditional probability that edge e exists, given that it has k adjacent edges, be

Thus, with p=310, this random graph is p-robust. At the same time, the edges are not independent, since the probability that e is present is influenced by the number of adjacent edges.

Now we can claim that this random graph asymptotically has a maximum clique of size at least 2log10/3n, chromatic number at least nlogbn with b=11−p=107, minimum dominating set at most logbn, also with b=10/7, and diameter at most lognlog(3n/10) . All these follow from the known results about the Erdős-Rényi random graph Gn,p (listed in the Introduction), complemented with our Theorem 1. Note that such bounds would be very hard to prove directly from the definition of the edge dependent random graph model.