Quaternion models have been developed for both direction of arrival estimation and beamforming based on crossed-dipole arrays in the past. However, for almost all the models, especially for adaptive beamforming, the desired signal is still complex-valued and one example is the quaternion-Capon beamformer. However, since the complex-valued desired signal only has two components, while there are four components in a quaternion, only two components of the quaternion-valued beamformer output are used and the remaining two are simply removed. This leads to significant redundancy in its implementation. In this work, we consider a quaternion-valued desired signal and develop a full quaternion-valued Capon beamformer, which has a better performance and a much lower complexity and is shown to be more robust against array pointing errors. 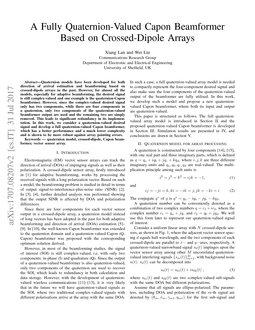 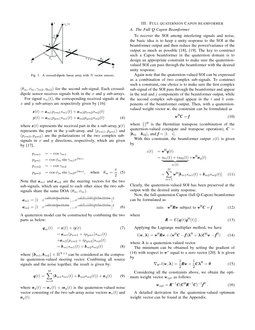 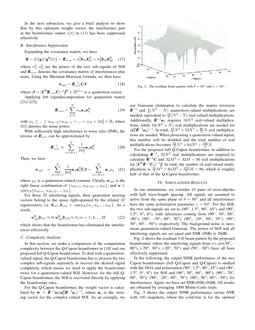 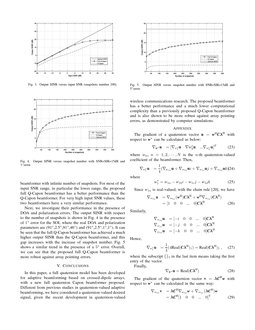 Electromagnetic (EM) vector sensor arrays can track the direction of arrival (DOA) of impinging signals as well as their polarization. A crossed-dipole sensor array, firstly introduced in [1] for adaptive beamforming, works by processing the received signals with a long polarization vector. Based on such a model, the beamforming problem is studied in detail in terms of output signal-to-interference-plus-noise ratio (SINR) [2]. In [3, 4], further detailed analysis was performed showing that the output SINR is affected by DOA and polarization differences.

Since there are four components for each vector sensor output in a crossed-dipole array, a quaternion model instead of long vectors has been adopted in the past for both adaptive beamforming and direction of arrival (DOA) estimation [5, 6, 7, 8, 9]. In [10], the well-known Capon beamformer was extended to the quaternion domain and a quaternion-valued Capon (Q-Capon) beamformer was proposed with the corresponding optimum solution derived.

A quaternion is constructed by four components [14, 15], with one real part and three imaginary parts, which is defined as q=qa+iqb+jqc+kqd, where i,j,k are three different imaginary units and qa,qb,qc,qd are real-valued. The multiplication principle among such units is

A quaternion number can be conveniently denoted as a combination of two complex numbers q=c1+ic2, where the complex number c1=qa+jqc and c2=qb+jqd. We will use this form later to represent our quaternion-valued signal of interest.

Consider a uniform linear array with N crossed-dipole sensors, as shown in Fig. 1, where the adjacent vector sensor spacing d equals half wavelength, and the two components of each crossed-dipole are parallel to x− and y−axes, respectively. A quaternion-valued narrowband signal s0(t) impinges upon the vector sensor array among other M uncorrelated quaternion-valued interfering signals {sm(t)}Mm=1, with background noise n(t). s0(t) can be decomposed into

where s01(t) and s02(t) are two complex-valued sub-signals with the same DOA but different polarizations.

Assume that all signals are ellipse-polarized. The parameters, including DOA and polarization of the m-th signal are denoted by (θm,ϕm,γm1,ηm1) for the first sub-signal and (θm,ϕm,γm2,ηm2) for the second sub-signal. Each crossed-dipole sensor receives signals both in the x and y sub-arrays.

For signal sm(t), the corresponding received signals at the x and y sub-arrays are respectively given by [16]:

A quaternion model can be constructed by combining the two parts as below:

where {\emphbm1,\emphbm2}∈HN×1 can be considered as the composite quaternion-valued steering vector. Combining all source signals and the noise together, the result is given by:

To recover the SOI among interfering signals and noise, the basic idea is to keep a unity response to the SOI at the beamformer output and then reduce the power/variance of the output as much as possible

[18, 19]. The key to construct such a Capon beamformer in the quaternion domain is to design an appropriate constraint to make sure the quaternion-valued SOI can pass through the beamformer with the desired unity response.

where {}H is the Hermitian transpose (combination of the quaternion-valued conjugate and transpose operation), \emphC=[\emphb01\emphb02], and \emphf=[1i].

With this constraint, the beamformer output z(t) is given by

Clearly, the quaternion-valued SOI has been preserved at the output with the desired unity response.

Now, the full-quaternion Capon (full Q-Capon) beamformer can be formulated as

Applying the Lagrange multiplier method, we have

where λ is a quaternion-valued vector.

The minimum can be obtained by setting the gradient of (14) with respect to \emphw∗ equal to a zero vector [20]. It is given by

Considering all the constraints above, we obtain the optimum weight vector \emphwopt as follows

A detailed derivation for the quaternion-valued optimum weight vector can be found at the Appendix.

In the next subsection, we give a brief analysis to show that by this optimum weight vector, the interference part at the beamformer output z(t) in (11) has been suppressed effectively.

Expanding the covariance matrix, we have

where σ21,σ22 are the power of the two sub-signals of SOI and \emphRi+n denotes the covariance matrix of interferences plus noise. Using the Sherman-Morrison formula, we then have

where β=(\emphCH\emphRi+n\emphC)−1\emphfH∈H2×1 is a quaternion vector.

With sufficiently high interference to noise ratio (INR), the inverse of \emphRi+n can be approximated by

For those M interfering signals, their quaternion steering vectors belong to the space right-spanned by the related Meigenvectors, i.e. \emphbm1,\emphbm2∈spanR{u1,u2,...,uM}. As a result,

which shows that the beamformer has eliminated the interferences effectively.

The gradient of a quaternion vector u=\emphwH\emphCλH with respect to \emphw∗ can be calculated as below:

where wn, n=1,2,⋯,N is the n-th quaternion-valued coefficient of the beamformer. Then,

is real-valued, with the chain rule

where the subscript {}1 in the last item means taking the first entry of the vector.

The gradient of the quaternion vector v=λ\emphCH\emphw with respect to \emphw∗ can be calculated in the same way:

Thus, the gradient can be expressed as

The gradient of cw=\emphwH\emphR\emphw can be calculated as follows.

Now we calculate the gradient of cw with respect to the four components of \emphw1.

The other three components are,