In this paper, we discover that the trace of the division of the optimal output estimation error covariance over the noise covariance attained by the Kalman-Bucy filter can be explicitly expressed in terms of the plant dynamics and noise statistics in a frequency-domain integral characterization. Towards this end, we examine the algebraic Riccati equation associated with Kalman-Bucy filtering using analytic function theory and relate it to the Bode integral. Our approach features an alternative, frequency-domain framework for analyzing algebraic Riccati equations and reduces to various existing related results. 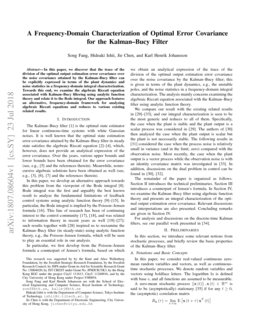 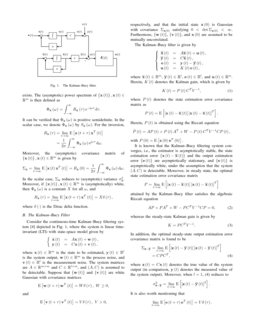 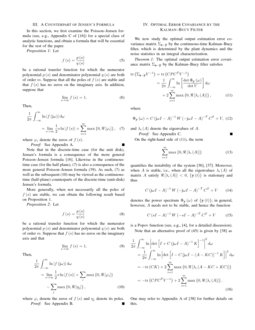 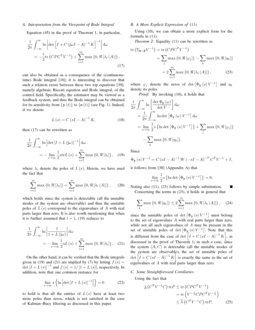 The Kalman filter has been adopted in acoustic echo cancellation due to ...
Dong Yang, et al. ∙

SymPKF: a symbolic and computational toolbox for the design of parametric Kalman filter dynamics

The purpose of this review is to present a comprehensive overview of the...
Adrian N. Bishop, et al. ∙

A major problem in motor control is understanding how the brain plans an...
Johannes Friedrich, et al. ∙

The Kalman–Bucy filter [1] is the optimal state estimator for linear continuous-time systems with white Gaussian noises. It is well known that the optimal state estimation error covariance attained by the Kalman–Bucy filter in steady state satisfies the algebraic Riccati equation [2, 3, 4], which, however, does not provide an analytical expression of the error covariance. Over the years, various upper bounds and lower bounds have been obtained for the error covariance (see, e.g., [5] and the references therein). Meanwhile, nonrecursive algebraic solutions have been obtained as well (see, e.g., [6, 3, 7] and the references therein).

In this paper, we develop an alternative approach towards this problem from the viewpoint of the Bode integral [8]. Bode integral was the first and arguably the best known result to analyze the fundamental limitations of feedback control systems using analytic function theory [9, 10, 11, 12, 13, 14, 15]. In particular, the Bode integral is implied by the Poisson–Jensen formula [16]. This line of research has been of continuing interest to the control community [17, 18], and was related to information theory in recent years as well [19, 20, 21, 22, 23, 24, 25, 26, 27]; such results together with [28] inspired us to reexamine the Kalman–Bucy filter (in steady-state) using analytic function theory, e.g., the Poisson–Jensen formula, which will be seen to play an essential role in our analysis.

In particular, we first develop from the Poisson–Jensen formula a counterpart of Jensen’s formula, based on which we obtain an analytical expression of the trace of the division of the optimal output estimation error covariance over the noise covariance by the Kalman–Bucy filter; this is given in terms of the plant dynamics, e.g., the unstable poles, and the noise statistics in a frequency-domain integral characterization. The analysis mainly concerns examining the algebraic Riccati equation associated with the Kalman–Bucy filter using analytic function theory.

We compare our result with the existing related results in [29, 30, 31, 32, 33], and our integral characterization is seen to be the most generic and reduces to all of them. Specifically, the case when the plant is stable and the plant output is a scalar process was considered in [29]. The authors of [30] then analyzed the case when the plant output is scalar but the plant is not necessarily stable. The following results in [31]

The remainder of the paper is organized as follows. Section II introduces the technical preliminaries. Section III introduces a counterpart of Jensen’s formula. In Section IV, we examine the Kalman–Bucy filter using algebraic function theory and presents an integral characterization of the optimal output estimation error covariance. Relevant discussions and interpretations are also presented. Concluding remarks are given in Section IV.

For analysis and discussions on the discrete-time Kalman filters, see our parallel work presented in

In this section, we introduce some relevant notions from stochastic processes, and briefly review the basic properties of the Kalman–Bucy filter.

ln is defined with base e, and all functions are assumed to be measurable.

A zero-mean stochastic process {x(t)},x(t)∈Rm is said to be (asymptotically) stationary [35] if for any t≥0, the (asymptotic) correlation matrix

exists. The (asymptotic) power spectrum of {x(t)},x(t)∈Rm is then defined as

It can be verified that Φx(ω) is positive semidefinite. In the scalar case, we denote Φx(ω) by Sx(ω). For the inversion,

Moreover, the (asymptotic) covariance matrix of {x(t)},x(t)∈Rm is given by

In the scalar case, Σx reduces to (asymptotic) variance σ2x. Moreover, if {x(t)},x(t)∈Rm is (asymptotically) white, then Φx(ω) is a constant X for all ω, and

where δ(⋅) is the Dirac delta function.

Consider the continuous-time Kalman–Bucy filtering system [4] depicted in Fig. 1, where the system is linear time-invariant (LTI) with state-space model given by

where x(t)∈Rm is the state to be estimated, y(t)∈Rl is the system output, w(t)∈Rm is the process noise, and v(t)∈Rl is the measurement noise. The system matrices are A∈Rm×m and C∈Rl×m, and (A,C) is assumed to be detectable. Suppose that {w(t)} and {v(t)} are white Gaussian with covariance matrices

respectively, and that the initial state x(0) is Gaussian with covariance Σx(0) satisfying 0<detΣx(0)<∞. Furthermore, {w(t)}, {v(t)}, and x(0) are assumed to be mutually uncorrelated.

The Kalman–Bucy filter is given by

where P(t) denotes the state estimation error covariance matrix as

attained by the Kalman–Bucy filter satisfies the algebraic Riccati equation

whereas the steady-state Kalman gain is given by

In addition, the optimal steady-state output estimation error covariance matrix is found to be

It is also worth mentioning that

Iii A Counterpart of Jensen’s Formula

In this section, we first examine the Poisson–Jensen formula (see, e.g., Appendix C of [16]) for a special class of analytic functions, and obtain a formula that will be essential for the rest of the paper.

be a rational transfer function for which the numerator polynomial p(s) and denominator polynomial q(s) are both of order m. Suppose that all the poles of f(s) are stable and that f(s) has no zeros on the imaginary axis. In addition, suppose that

where φi denote the zeros of f(s).

More generally, when not necessarily all the poles of f(s) are stable, we can obtain the following result based on Proposition 1.

be a rational transfer function for which the numerator polynomial p(s) and denominator polynomial q(s) are both of order m. Suppose that f(s) has no zeros on the imaginary axis and that

where φi denote the zeros of f(s) and ηj denote its poles.

We now study the optimal output estimation error covariance matrix Σz−¯¯¯y by the continuous-time Kalman–Bucy filter, which is determined by the plant dynamics and the noise statistics in an integral characterization.

denote the eigenvalues of

denotes the power spectrum Φy(ω) of {y(t)}; in general, however, A needs not to be stable, and hence the function

One may refer to Appendix A of [38] for further details on this.

Iv-a Interpretation from the Viewpoint of Bode Integral

Equation (V-C) in the proof of Theorem 1, in particular,

can also be obtained as a consequence of the (continuous-time) Bode integral [16]; it is interesting to discover that such a relation exists between these two top equations [39], namely algebraic Riccati equation and Bode integral, of the control field. Specifically, the estimator may be viewed as a feedback system, and thus the Bode integral can be obtained for its sensitivity from {y(t)} to {e(t)} (see Fig. 1). Indeed, if we denote

then (IV-A) can be rewritten as

where λi denote the poles of L(s). Herein, we have used the fact that

which holds since the system is detectable (all the unstable modes of the system are observable) and thus the unstable poles of L(s) correspond to the eigenvalues of A with real parts larger than zero. It is also worth mentioning that when it is further assumed that l=1, (19) reduces to

to hold is that all the entries of L(s) have at least two more poles than zeros, which is not satisfied in the case of Kalman–Bucy filtering as discussed in this paper.

Iv-B A More Explicit Expression of (1)

Equality (1) can be rewritten as

By invoking (2), it holds that

Concerning the terms in (2), it holds in general that

Using the fact that

One might also compare our bounds with those in, e.g., [5], which, however, goes beyond the scope of this paper.

We now consider some special cases of Theorem 1.

If l=1, and suppose that {w(t)} and {v(t)} are white Gaussian with covariance matrix W and variance σ2v, respectively, then

If l=m=1, and suppose that {w(t)} and {v(t)} are white Gaussian with variances σ2w and σ2v, respectively, then

We now present a list of comparisons with existing results in the related works. It will be seen that our result in (1) is the most generic and reduces to all the listed ones, although they have adopted different approaches.

which may be viewed as the as the continuous-time counterpart of the Wiener–Masani formula [44, 41, 43].

In this paper, we have shown that the trace of the division of the optimal output estimation error covariance over the noise covariance attained by the Kalman–Bucy filter can be explicitly expressed in terms of the plant dynamics and noise statistics in a frequency-domain integral characterization. We have also discussed the relation of our integral characterization to the Bode integral. Possible future research directions include analysis of other classes of algebraic Riccati equations.

It follows from the Poisson–Jensen formula for the half plane [16] that for every point s0=σ0+jω0, σ0>0,

where zi denote the nonminimum-phase zeros of f(s) and z∗i denote the complex conjugate of zi. Hence, taking ω0=0, we have

We finally consider the remaining term in (V-A):

It thus follows that the limit (42) always exists; it is always finite, although it can be 0 when pm−1=qm−1. This completes the proof.

where l(s) is chosen as a polynomial of s satisfying the following conditions:

For all s, it holds that

Hence, (2) can be rewritten as