We modify ETAS models by replacing the Pareto-like kernel proposed by Ogata with a Mittag-Leffler type kernel. Provided that the kernel decays as a power law with exponent β + 1 ∈ (1,2], this replacement has the advantage that the Laplace transform of the Mittag-Leffler function is known explicitly, leading to simpler calculation of relevant quantities. 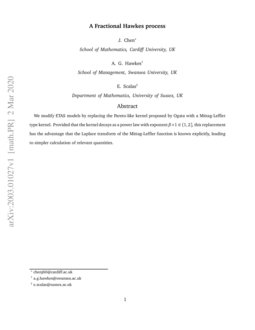 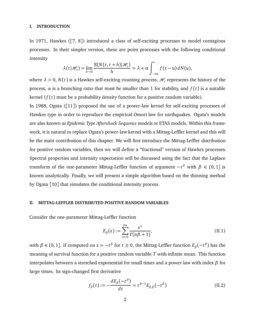 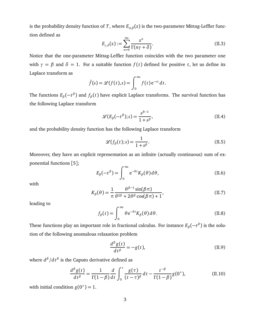 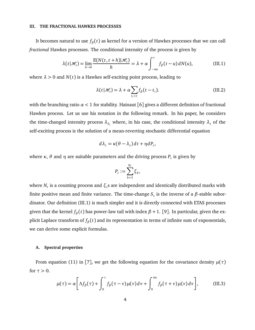 The occurrence of digits 1 through 9 as the leftmost nonzero digit of nu...
Mingshu Cong, et al. ∙

This paper is devoted to the determination of the asymptotical optimal i...
Chunhao Cai, et al. ∙

In 1971, Hawkes (Hawkes (1971a, b)) introduced a class of self-exciting processes to model contagious processes. In their simpler version, these are point processes with the following conditional intensity

where λ>0, N(t) is a Hawkes self-exciting counting process, Ht represents the history of the process, α is a branching ratio that must be smaller than 1 for stability, and f(t) is a suitable kernel (f(t)

must be a probability density function for a positive random variable).

In 1988, Ogata (Ogata (1988)) proposed the use of a power-law kernel for self-exciting processes of Hawkes type in order to reproduce the empirical Omori law for earthquakes. Ogata’s models are also known as Epidemic Type Aftershock Sequence models or ETAS models. Within this framework, it is natural to replace Ogata’s power-law kernel with a Mittag-Leffler kernel and this will be the main contribution of this chapter. We will first introduce the Mittag-Leffler distribution for positive random variables, then we will define a “fractional” version of Hawkes processes. Spectral properties and intensity expectation will be discussed using the fact that the Laplace transform of the one-parameter Mittag-Leffler function of argument −tβ with β∈(0,1] is known analytically. Finally, we will present a simple algorithm based on the thinning method by Ogata Ogata (1981) that simulates the conditional intensity process.

with β∈(0,1]. If computed on z=−tβ for t≥0, the Mittag-Leffler function Eβ(−tβ) has the meaning of survival function for a positive random variable T

with infinite mean. This function interpolates between a stretched exponential for small times and a power-law with index

is the probability density function of T, where Eα,β(z) is the two-parameter Mittag-Leffler function defined as

Notice that the one-parameter Mittag-Leffler function coincides with the two parameter one with γ=β and δ=1. For a suitable function f(t) defined for positive t, let us define its Laplace transform as

and the probability density function has the following Laplace transform

Moreover, they have an explicit representation as an infinite (actually continuous) sum of exponential functions Gorenflo (1997);

These functions play an important role in fractional calculus. For instance Eβ(−tβ) is the solution of the following anomalous relaxation problem

where dβ/dtβ is the Caputo derivative defined as

It becomes natural to use fβ(t) as kernel for a version of Hawkes processes that we can call fractional Hawkes processes. The conditional intensity of the process is given by

where λ>0 and N(t) is a Hawkes self-exciting point process, leading to

with the branching ratio α<1 for stability. Hainaut Hainaut (2019) gives a different definition of fractional Hawkes process. Let us use his notation in the following remark. In his paper, he considers the time-changed intensity process λSt where, in his case, the conditional intensity λt of the self-exciting process is the solution of a mean-reverting stochastic differential equation

where κ, θ and η are suitable parameters and the driving process Pt is given by

where Nt is a counting process and ξi

s are independent and identically distributed marks with finite positive mean and finite variance. The time-change

St is the inverse of a β-stable subordinator. Our definition (III.1) is much simpler and it is directly connected with ETAS processes given that the kernel fβ(t) has power-law tail with index β+1. Mainardi (2000). In particular, given the explicit Laplace transform of fβ(t) and its representation in terms of infinite sum of exponentials, we can derive some explicit formulas.

where Λ represents the asymptotic stationary value of the conditional intensity as derived in equation (3.9) below. If we now take the Laplace transform of (III.3), we get

so that the last summand in (III.4) becomes

In principle, a numerical approximation of the integral in equation (III.5) plugged into (III.4) and coupled with equation (II.5) can lead to an explicit approximate expression for the Laplace transform ~μ(s). This will be the subject of a further paper. An alternative approach is given in Hawkes (1971b) where the Bartlett spectrum is defined for real ω as

where, because E[(dN(t))2]=E[dN(t)] if events cannot occur multiply, the complete covariance density contains a delta function

where, in our case, we would have

The proof of this result depended on the assumption that the exciting kernel decays exponentially asymptotically. However, this is not true for the Mittag-Leffler distribution, which decays as a power law. Bacry and Muzy Bacry (2016) prove a more general result using Laplace transforms in the complex plane, more easily digested from section 2.3.1 in Bacry (2015). Then the Laplace transform of the covariance density is given by

is the Laplace transform of the exciting kernel. In our case for τ>0, we have

Equations (III.7) and (III.8) look much the same, apart from a change of notation and a factor 2π. The difference, however, is that in (III.7) we are dealing with real ω while, in (III.8), s is a general complex variable and we can choose its domain to obtain well-behaved functions.

Let us consider the expectation Λ(t)=E[λ(t|Ht)] for both a stationary and non-stationary fractional Hawkes process. In the stationary case (process from t=−∞), from equation (III.1), we get Λ=λ+nΛ, leading to

On the contrary in the non-stationary case (process from t=0), we can modify equation (III.1) as follows

so that the time-dependent expectation obeys the equation

Taking Laplace transforms, we get

Equation (III.12) can be inverted numerically (or analytically for β=1/2) to give Λ(t) as well as the expected number of events from 0 to t as

Also, based on a continuous version of Hardy-Littlewood Tauberian theorem Feller (1971) we get

From Fig. 1, one can see that Λ(t) goes up very fast at first and, then, slowly converges to its asymptotic value 2. This is presumably due to the long tail of the Mittag-Leffler kernel.

In order to simulate the intensity process introduced in equation (III.1), we use the thinning algorithm introduced by Ogata Ogata (1981) (see also Zhuang and Touati 2015 report Zhuang (2015)). The function ml.m described in Garrappa (2015) is needed to compute the Mittag-Leffler functions described above and can be retrieved from the Matlab file exchange. The algorithm is as follows

An implementation of this algorithm in Matlab is presented below.

In this paper, we defined a “fractional” Hawkes process and we studied its spectral properties and the expectation of its intensity. Thanks to explicit expressions for Laplace transforms, we could derive some analytical expressions that are only asymptotically available for power-law kernels of Pareto type as originally suggested by Ogata. We also presented an explicit simulation of the intensity process based on the so-called thinning method.

Further work is needed to better characterize our process. In particular, we did not deal with parameter estimation, the multivariate version of the process, and we did not use the model to fit earthquake data (or any other data for what matters including financial data). We do hope that all this and more can become the subject of an extensive future paper on this process.