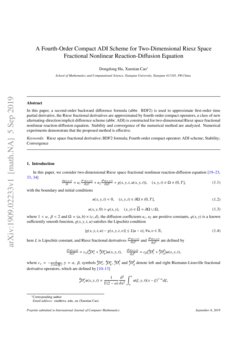 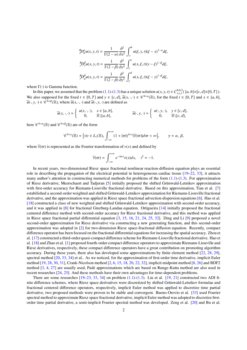 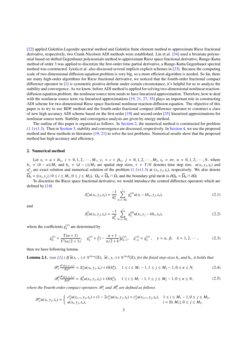 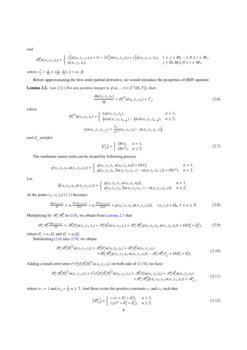 with the boundary and initial conditions

here L is Lipschitz constant, and Riesz fractional derivatives ∂αu(x,y,t)∂|x|α and ∂βu(x,y,t)∂|y|β are defined by

where Γ(⋅) is Gamma function.

is represented as the Fourier transformation of

v(x) and defined by

are usually used, Padé approximations which are based on Runge-Kutta method are also used in recent researches

(25; 24). And these methods have their own advantages for time-dependent problems.

The outline of this paper is organized as follows. In 2, the numerical method is constructed for problem (1.1)-(1.3). Then in 3, stability and convergence are discussed, respectively. In 4, we use the proposed method and these methods in literatures (19; 21) to solve the test problems. Numerical results show that the proposed method has high accuracy and efficiency.

To discretize the Riesz space fractional derivative, we would introduce the centred difference operators which are defined by (14)

where the coefficients g(γ)k are determined by

then we have following lemma.

Before approximating the first-order partial derivative, we would introduce the properties of BDF operator.

The nonlinear source term can be treated by following process

Omitting the truncation error Rni,j, we can obtain the numerical scheme for solving the problem (1.1)-(1.3) as follows

the boundary and initial conditions are

where Hun−1i,j=(BαxBβy+τ2σ2nδαxδβy)(I−σnτD(2)t)uni,j, and we can also rewrite it as follows

In order to analyze the stability and convergence of the method, we introduce some notations and lemmas.

For any un,vn∈ˆγh, we define the following discrete inner product and corresponding norm

.) For any positive integer n and real vector

Theorem 4.1 in (15) means that −δαx and −δβy are symmetric positive definite operators. Therefore, with the help of commutativity of Λx and Λy, we could introduce a semi-norm ∥un∥2δ≜(δαxδβyun,un):=(ΛxΛyun,ΛxΛyun) be similar with (1; 3).

For any un∈ˆγh, it holds that

Similarly, we can obtain

The proof is completed. ∎

then it holds that